The two women met during a smoke break across the street from Riley Hospital for Children.

That’s how it started. They talked about their boys and what brought them to Riley, and the friendship grew from there.

Now, Sheila Milam and Ronni Stubbs are trusted confidantes, meal buddies and cheerleaders – both for their sons and for each other.

Both mothers have been at Riley for what seems like forever to them. Ronni and her husband, Billy, arrived with their son Brody in February. Sheila came with her son Ira in April, leaving her husband, Ira Sr., back in Chicago to care for their four foster kids.

Long days and nights spent by their sons’ bedsides have taken a toll on the women, but they forge ahead, comforted by the knowledge that they have each other.

Asked what that has meant to her, Sheila wasted no words.

“The world. Ronni and her husband mean the world.”

Sheila’s husband isn’t able to be with her at Riley because he is caring for their four foster kids, ages 14, 11, 2 and 1, back in Chicago, and he is on dialysis three days a week. 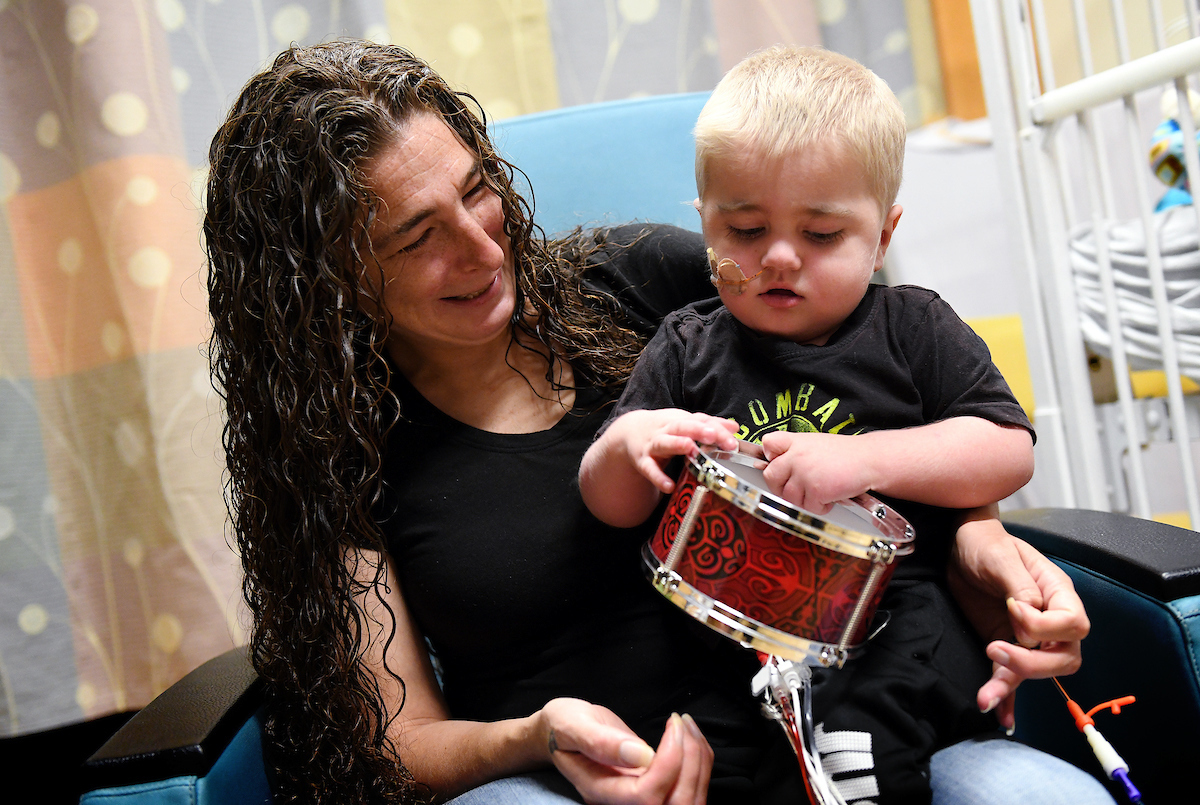 Neither woman knows Indianapolis well. Ronni and her husband moved here from Bristol, Indiana, so 2-year-old Brody could be closer to Riley.

The women go to Ronald McDonald House daily for lunch and dinner, they go shopping together – as they did this week for Ira’s 12th birthday – and they pray together – for their kids and for each other.

Their bond caught the attention of Riley child life specialist Heather Troyer, who works in the PICU.

“Sheila and Ronni have both spent time in the PICU and continue to find comfort in their friendship despite being on separate units now,” Troyer said.

“They have both had to endure heartbreak, joy, fear, sadness and anger,” she said. “I often see them together and I often see them with other moms who have had long stays in the hospital. I just think it’s amazing that they have found each other to help cope with the everyday ups and downs of illness.”

When Troyer saw the two on the heart unit recently, she learned they had befriended a mom there and were helping her pack up her things as she and her daughter prepared to leave Riley.

“That was the moment that struck me. Not only do they have a bond but they find friendship with other women at Riley,” she said. “They share similar stories, but their kids are so different. They can cope with hospitalization just through the friendship they’ve found.” 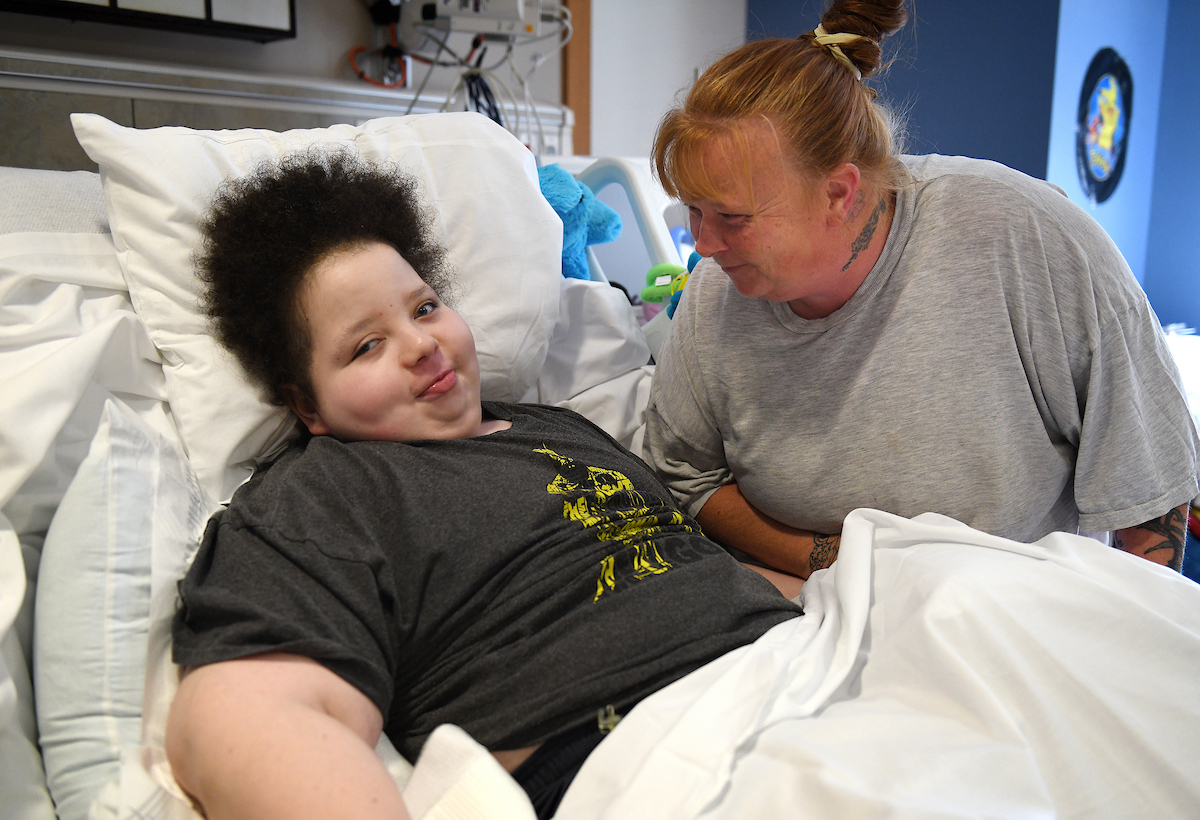 Whether it’s to cry, laugh or lift each other up, the time they spend together helps them recharge.

“Just to have a friend to talk to and to have a break in the day helps them both,” Troyer said. “They know what each is going through; there’s no judgment.”

Ira, who celebrated his 12th birthday Oct. 1 at Riley, is now on the rehab floor, where therapists are hoping to get him walking again. He suffered seizures, related to a condition called Posterior Reversible Encephalopathy Syndrome, accompanied by strokes.

Before his hospitalization, Ira was diagnosed with autism and has been mostly nonverbal for years, but he “talked” with people via a communicator device that allowed him to type in sentences and the device would speak for him.

“He has a great support system at school, so I do hope he will be able to walk and go back to school,” Sheila said. “He’s very social, just a fun-loving person.”

Even though he doesn’t talk, he gives high fives to people he knows and likes, his mom said. At school, he loves to work with the custodian to buff the floors and handle the recycling.

In his hospital room, Ira has a chair full of Peppa Pig stuffed animals, and he spends his time between rigorous therapy appointments watching his favorite videos – “Monster House,” “Peppa Pig” and “Cars.” 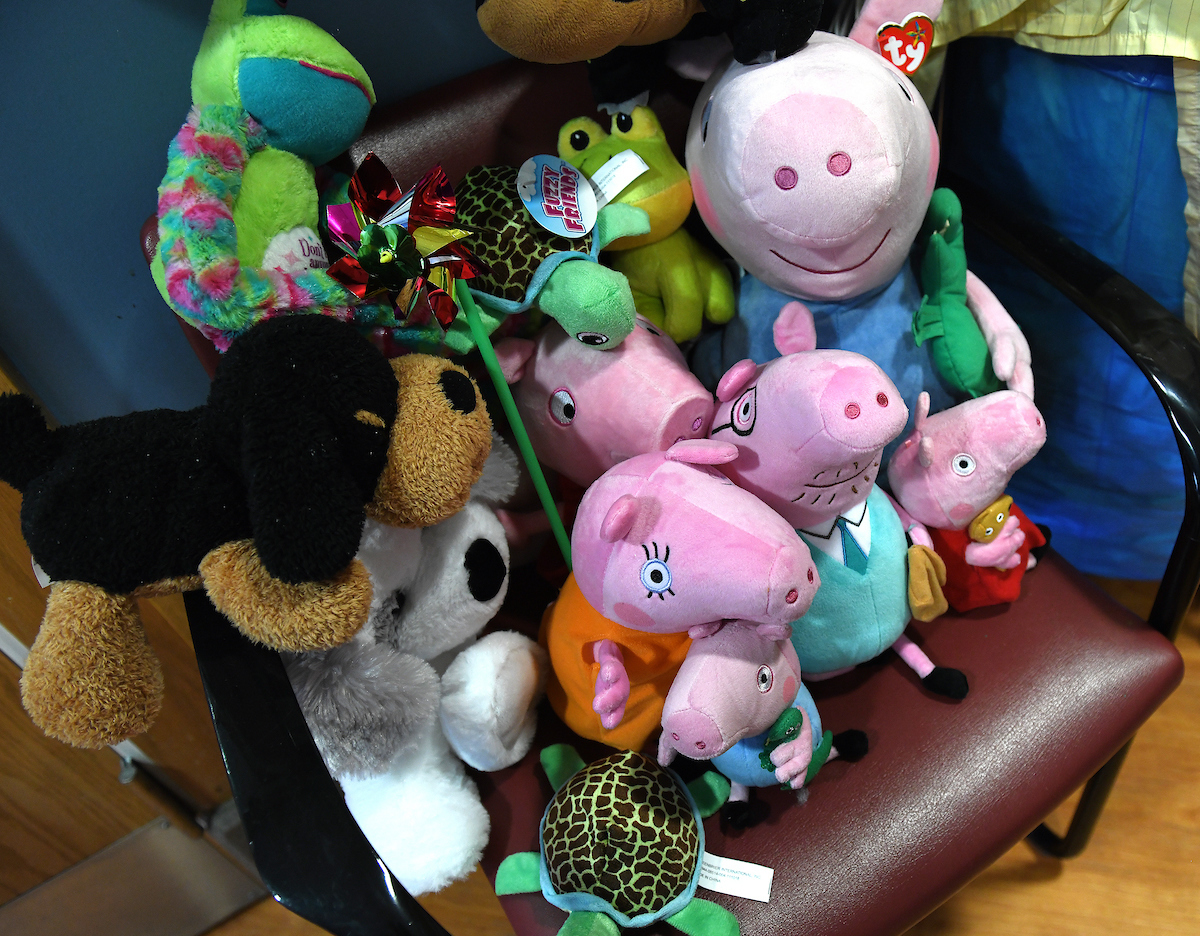 Ronni, whose son was diagnosed with , an autoimmune disorder, and Omenn syndrome, an inherited disorder of the immune system, rarely leaves Brody’s side. When she does, she puts husband Billy in charge. Both parents sleep in the room with their little boy – Ronni in the chair next to his crib and Billy on the sofa in the back of the room.

She is thankful for the doctors, nurses, therapists and child life staff who have helped her son.

“Most of the nurses treat Brody like they’re his aunts because he’s been here so long,” she said. “And the child life people are awesome. If you want something for your kid to make them feel more like home, they’ll get it.”

Brody had a stem cell transplant in June and later was diagnosed with encephalitis, an inflammation of the brain. He is nonverbal and does not walk, but he can stand with support.

“I hope someday he’ll talk again and get back to walking and be able to play,” Ronni said as she cuddled with her son. “I hope his stem cell graft will hold so he doesn’t have to have another transplant.”

Beyond that, she takes it day by day. When it’s time for lunch or a smoke, she texts Sheila and they meet in the middle, sharing stories about the trials and triumphs of the day.

“It’s nice to have somebody to lean on,” Ronni said.

In their darkest moments, they pray together.

“The doctors told us both that our kids are medical mysteries,” Sheila said. “I want to be special but not like that.”

She also sleeps in the room with her son. At first, the beeping of monitors kept her awake. Now, she’s used to the noise.

“I fall asleep to the beeps. When I wake up and hear the beeps, I know he’s OK.”

Though she hopes to be taking her son home in the next month or so, she won’t leave her friendships behind.