MoMo twins Lena and Delaney keep their parents on the go

The Drew twins, who shared a placenta and amniotic sac, are thriving after coming into the world 3½ months early and spending six months fighting for their lives at Riley.

A year ago this month, little Lena Drew went home for the very first time. The next month, just days before Christmas, her twin sister, Delaney, followed her.

It was a reunion that their parents, Eric and Emma Drew, thought might never happen, considering the precariousness of the babies’ health. But the identical twins have defied the odds from the beginning.

Today, their adventure continues in the tiny town of Petersburg, Indiana, where the girls have been keeping their parents on the go from the very beginning. 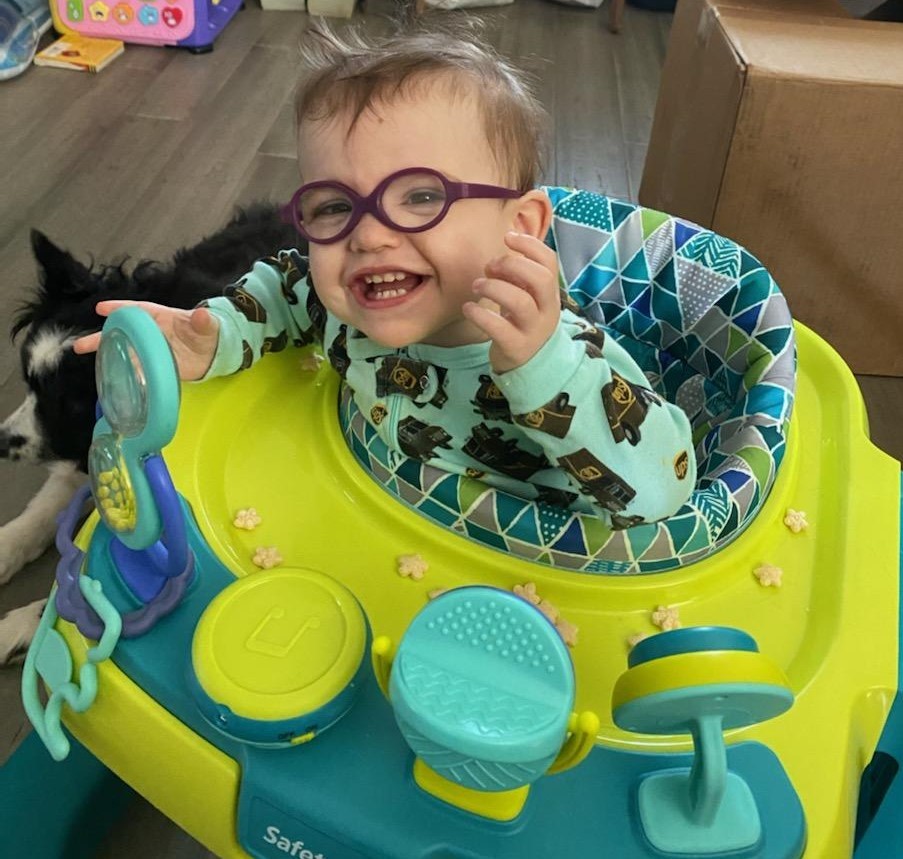 “They are busy! They’re starting to catch up,” Emma said Friday after taking the girls to the doctor. “Lena is crawling. I call it a zombie crawl. She’s getting up on her hands and knees more and rocking. They’re both bearing weight in their legs and getting stronger.”

Born 3½ months early in Evansville, the girls, each weighing about 1½ pounds, were transferred to Riley Hospital for Children at IU Health in June of 2019. They were mono-amniotic, or MoMo, twins, an anomaly in which babies share a placenta and amniotic sac. It occurs in just 1% of identical twins and less than 0.1% of all pregnancies.

The couple found out before the emergency C-section that their babies also had twin to twin transfusion syndrome, meaning one twin was taking blood and nutrients from her sister. Left untreated, the survival rate for TTTS twins is 10-15%. The race to save both babies was on.

While the twins’ condition was extremely rare, Riley neonatologist Dr. David Boyle said at the time, “We have experience taking care of extremely premature babies with the type of complications that Lena and Delaney have,” he said. “We have an incredible team here.”

Today, those twins are 17 months old and weigh 17½ pounds each, still small for their age, but “we are on the charts,” Emma said.

As she talks, Lena lets out a cry for attention.

“Lena is very loud and into everything and on the go,” her mom said. “But Delaney is starting to get just as vocal now.”

That’s because Delaney, described as “more chill and reserved,” is more aware of what is going on around her. Diagnosed with profound bilateral hearing loss, she was recently fitted with cochlear implants, and the difference has been amazing.

“She has just taken off. She’s holding her head up more and has more interest in her environment. She’s really starting to blossom,” Emma said, adding that her Riley audiologists are “beyond tickled” with her.

“They told us not to expect a reaction from her when they activated her implants, and then she had the biggest smile you ever saw when she heard Eric’s voice and my voice. I think we all had tears in our eyes.”

Lena does not have any hearing impairment, but she recently got glasses that strap behind her little head. Still, she likes to pull them off when mom and dad aren’t looking.

The glasses are meant to strengthen one of Lena’s eyes, but she may not have to wear them long-term. The fact that both girls’ vision is relatively good is another miracle, Emma said, considering both suffered from retinopathy of prematurity, a potentially blinding disease caused by abnormal development of retinal blood vessels in premature infants. They were treated for the disease while at Riley.

After spending months in the NICU at Riley while their girls powered through multiple surgeries and health challenges, Emma and Eric can’t help but miss the nurses, doctors, therapists and techs they got to know so well last year.

They had hoped to have a one-year birthday party for the twins with the Riley team in June, but COVID put a stop to that, so now they’re looking to next year. 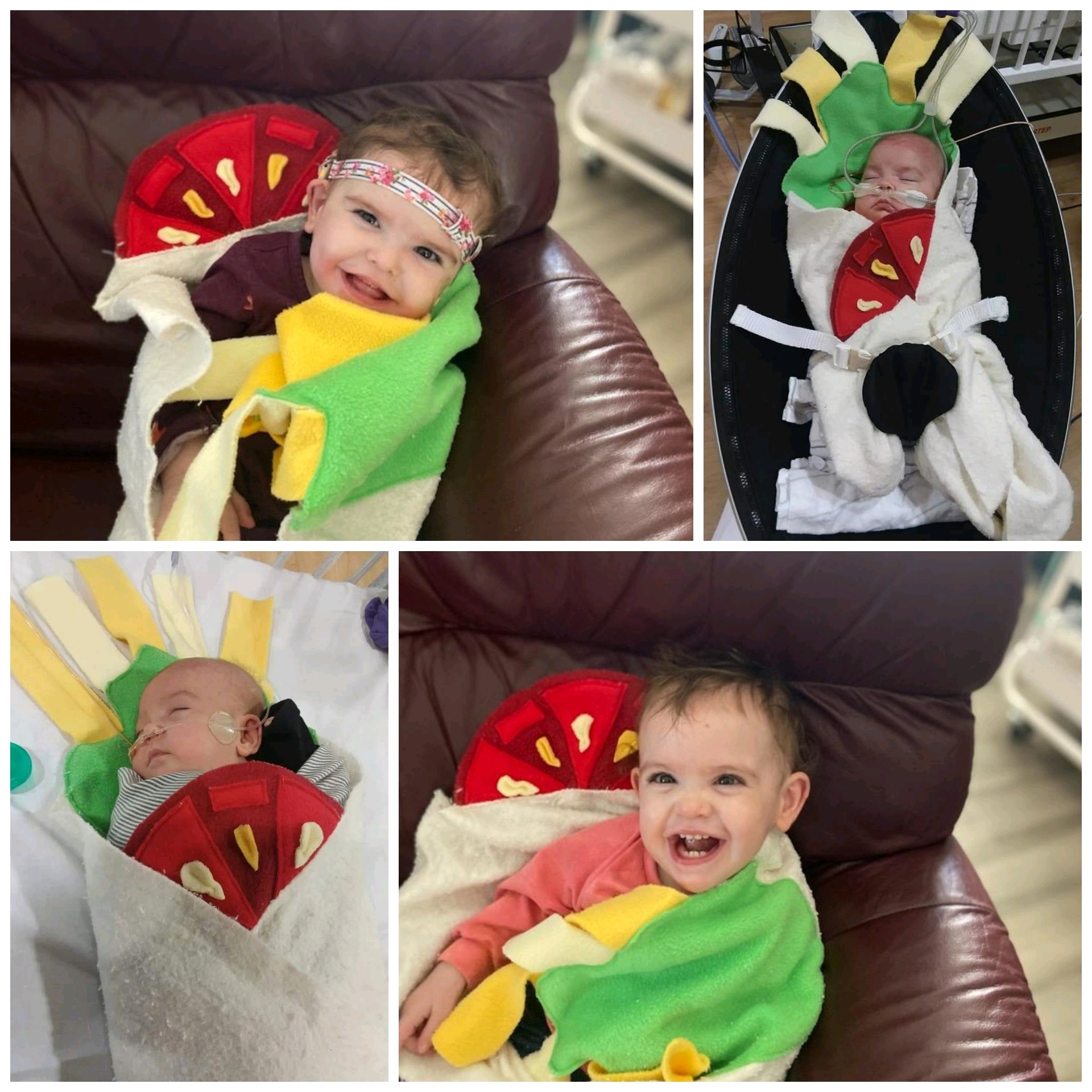 By then, Emma is hoping the girls will have achieved more milestones, perhaps even trying to walk. Already, Lena, who suffered some neurological damage, is getting close to sitting up on her own. She is also Miss Independent, Emma said, wanting to figure things out on her own and trying to feed herself baby food and some table food.

Delaney got a feeding tube in May to help with her reflux, but she is tolerating a mixture of pureed real food.

“We’re also working with her to take some by mouth so that maybe in a few years she can get rid of the tube,” Emma said.

Both girls continue to work with physical, occupational and speech therapists weekly.

Despite the challenges of the past year-and-a-half, Eric and Emma consider themselves blessed.

“We’ve heard stories about other people who’ve had premature babies and some who don’t survive. It just makes you feel so lucky,” she said. “We’re just thankful for Riley.”