Born with half a heart, Ashley Clark didn’t think she could have a child – until she did.

From the time she was a little girl, Ashley Clark understood that having a baby herself someday was not in the cards.

She accepted what doctors told her but didn’t dwell on it.

Born with what amounts to half a heart (the right ventricle never developed), she was transferred at 1 day old to Riley Hospital for Children at IU Health. She underwent open-heart surgery twice with Dr. John Brown to correct the problem, in addition to a few heart catheterizations and a cardiac shunt along the way.

Hypoplastic right heart syndrome occurs in 1 in 2,500 births in the United States. The congenital defect restricts blood flow to the lungs. While there is no cure, a series of surgeries can treat it.

Ashley had a pretty typical childhood otherwise, participating in dance throughout elementary school. She wanted to try gymnastics, but her mom thought that might be too strenuous for her heart.

Now 34, she is a kindergarten teacher in Greenfield, where she grew up. She’s surrounded by children in the classroom, but when she goes home, she also has a little one of her own.

Her “miracle baby” is 14 months old. Lilly was a surprise, for sure, but her parents were thrilled with her arrival.

“For years growing up, the doctors said no kids,” Ashley said. Before she and Chad Clark married 13 years ago, they discussed her situation and accepted the fact that they would not have biological children.

Ashley’s new cardiologist, however, didn’t rule out the possibility. IU Health Dr. Aaron Kay suggested Ashley was healthy enough to carry and deliver a child if that’s what the couple wanted to do. Routine clinic evaluation and extra tests showed that her heart was in good enough shape for her to have a good chance at a healthy pregnancy, he said.

But she and Chad ultimately decided not to get pregnant, mostly because Chad feared for her safety.

In January 2017, they signed up for classes to become foster parents, with the goal to adopt a child.

A few months later, Ashley discovered a stunning fact. Her birth control device had failed. She was pregnant.

The couple took a minute to process their emotions.

“We were excited, scared, elated, in shock,” she said. “I found out I was pregnant on a Friday, so I called my OB on Monday, and she said, ‘you need to come in right now.’ ”

She saw the doctor every two weeks throughout her pregnancy. They initially feared she would have to go on bed rest, but mother and baby fared incredibly well, she said.

Ashley was in the classroom teaching on Friday, Dec. 15, 2017, and she delivered her baby girl via C-section the following Monday. It was the day after the couple’s 12th wedding anniversary.

“I felt great. I never had any problems with my heart, no complications, never felt out of breath besides typical pregnancy stuff,” she said. “Now she’s just our little miracle baby. She’s healthy, and I’ve had no complications since then.”

Dr. Kay confirmed that despite Ashley’s congenital heart disease, she has been doing very well.

“Many patients with her condition are not appropriate candidates for pregnancy and may get very sick during pregnancy or have other problems that result in the need for premature delivery,” he said.

She has done well predominantly due to understanding that her condition requires life-long care, including yearly visits to her cardiologist, Dr. Kay said.

A recent stress test revealed she was in better shape than the year before she became pregnant.

The better to keep up with a toddler. 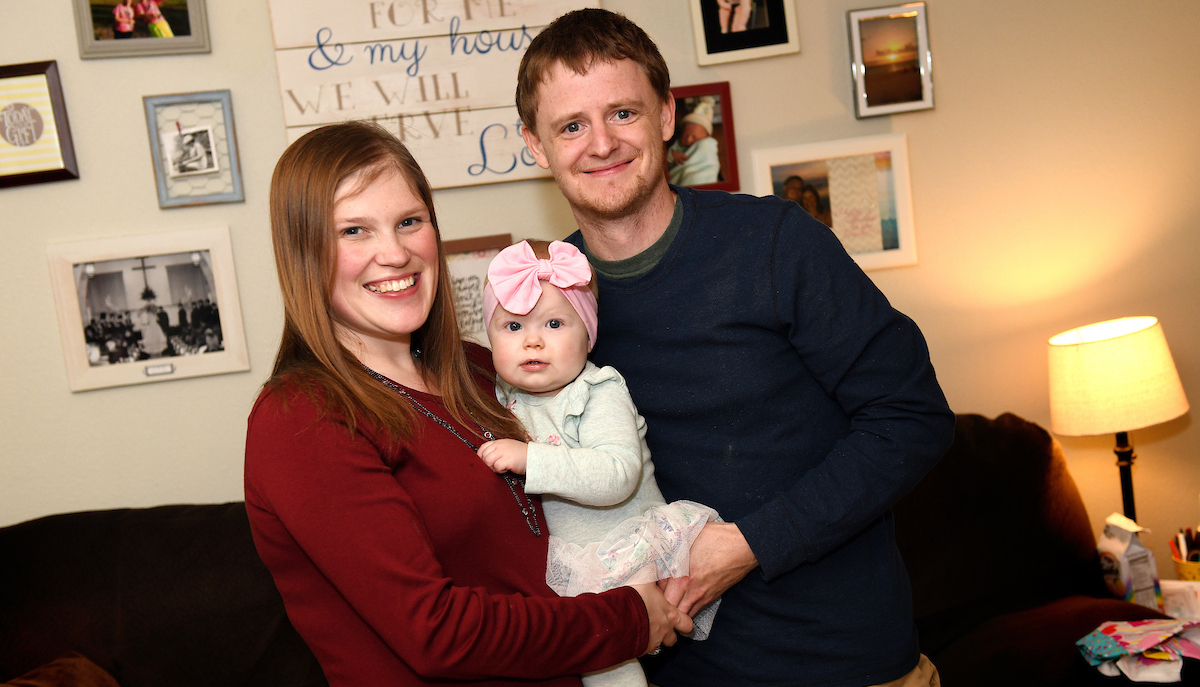 “Lilly is walking and babbling like crazy. She loves her stuffed animals, likes to roughhouse with dad. He throws her in the air, and they roll around on the floor.”

Lilly was checked for congenital heart defects by ultrasound during the pregnancy “and was a very healthy girl,” Kay said.

Ashley and Chad don’t plan to tempt fate by getting pregnant again.

“But if it happened again on accident, I would totally be OK with it,” she said.