This 8-year-old counts Victor Oladipo from the Indiana Pacers and Kenny Moore from the Indianapolis Colts among friends who’ve helped him during his year of cancer treatment.

Mason Garvey’s hair is starting to grow back, but he still hides it underneath a ball cap. It used to be dark and straight, but he’s hoping it comes in blond and curly – kind of like a basketball player he admires. 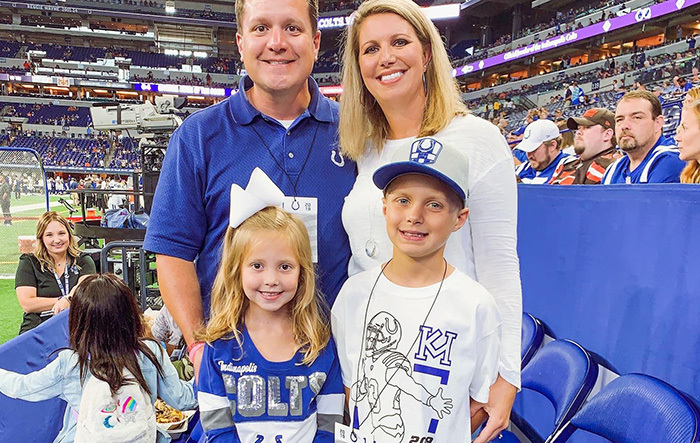 It’s been one year since he and his parents, Kevin and Heather, got the news that would shake their world.

Just 7 years old then, he would need months of chemo. He would miss school, miss football and basketball season and miss playing with his friends. But he would make so many new friends along the way.

Friends like Victor Oladipo of the Indiana Pacers and Kenny Moore of the Indianapolis Colts. The athletes cheered on the second-grader through every battle.

Mighty Mason became his moniker as he fought through the rigors of treatment at Riley Hospital for Children at IU Health.

It wasn’t just athletes supporting him, of course. His care team at Riley was excellent, Heather said, but one nurse in particular made an impression. 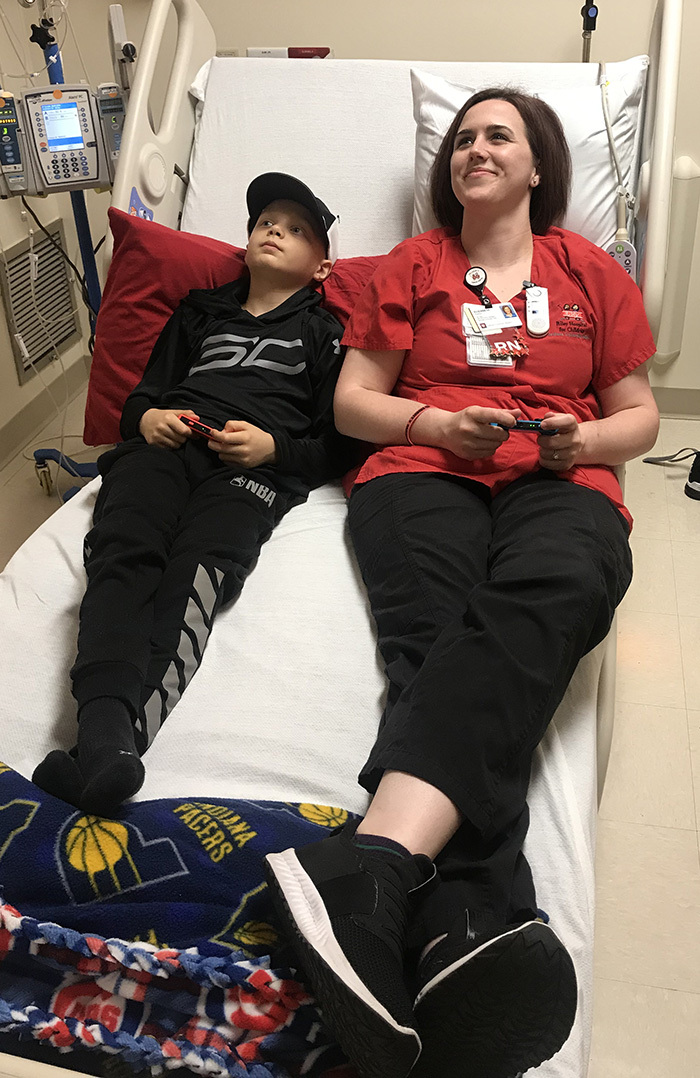 Elizabeth Thach and Mason have a special bond, Heather said.

“We love her so much. She came to his Dine Out to Donate and the Indians game where he threw out the first pitch. This was HIS nurse.”

A year later and Mason is back in school at Pleasant Grove Elementary in Center Grove. Now a third-grader, he loves the feeling of being a regular kid again, his mom said.

A teacher and instructional coach at Pleasant Grove herself, Garvey takes Mason and his little sister Kinley to school every day.

While his mom is talking on the phone on a summer evening, Mason is outside playing with the neighbor kids. It’s the kind of thing he missed for so long, but no more.

Mason finished chemo back in June, but he had to have two additional weeks of radiation. That was a surprise.

Spots on his lungs never fully went away, so doctors said to be safe, he should have the radiation.

“We decided to have him go ahead and ring the bell to signify the end of his chemo that day,” Heather said. “We knew if we didn’t let him ring the bell that would send a red flag to him.”

Mason finished radiation in August and has his end-of-treatment scans this week, then he’ll return to Riley for repeat scans in three months. If those come back clear, he can have his port removed. That’s a day he’s definitely looking forward to, Heather said, so he can play basketball and football again.

But for her, the end of treatment brings a new uneasiness.

“We’re adjusting to a new normal, not being at Riley, and it’s not all it’s cracked up to be,” she said.

Because as sick as the chemo made him, she looked at it as his security blanket.

“The chemo was killing the cancer. Now it’s all up to his body to keep it away. At the beginning, you’re like ‘please let this be over,’ and then when it’s over, you’re like ‘oh wait.’ ”

So now, every time Mason says his stomach hurts or he sneezes, Heather has to hush the little voice inside her that says “why?”

“Your mind instantly goes to that place. You try not to live in that, but it is really hard not to.”

As the family adjusts to their new/old routine, Mason, who turns 9 next month, is excited about football season starting up and basketball around the corner. 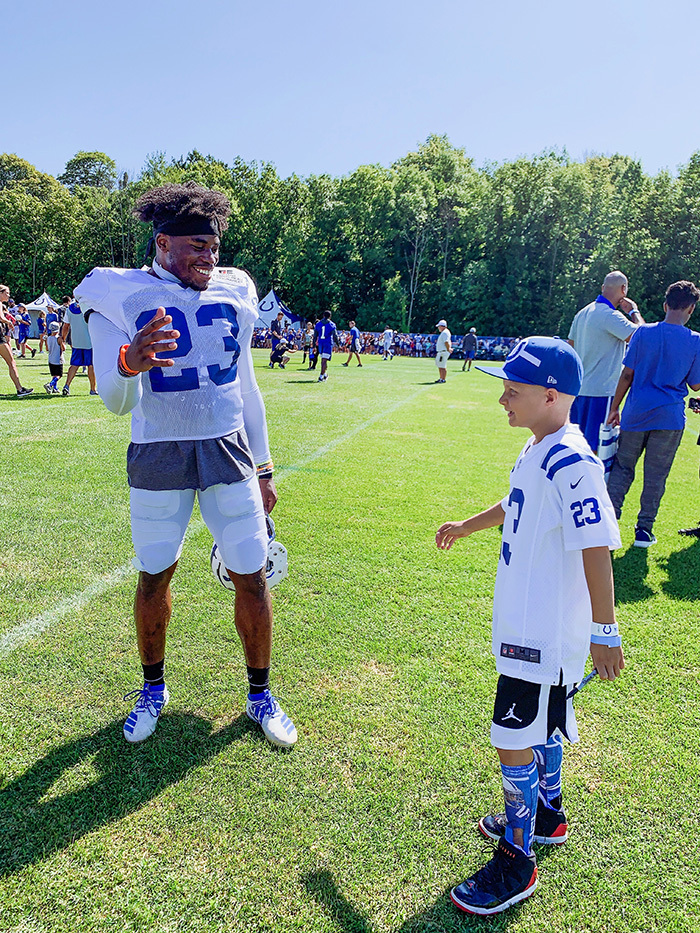 His passion for both is fed by friendships with Moore and Oladipo, who have welcomed Mason and his family to Colts training camp, Colts and Pacers games and Oladipo’s basketball camp.

Heather said when Mason got to meet Colts wide receiver T.Y. Hilton at a game last season, “I thought his head was going to fall off, he was so excited.”

Blue, the Colts mascot, also took a liking to Mason, inviting him to help design a new pair of shoes for Blue for the month of October as a nod to the NFL’s Crucial Catch cancer awareness campaign. 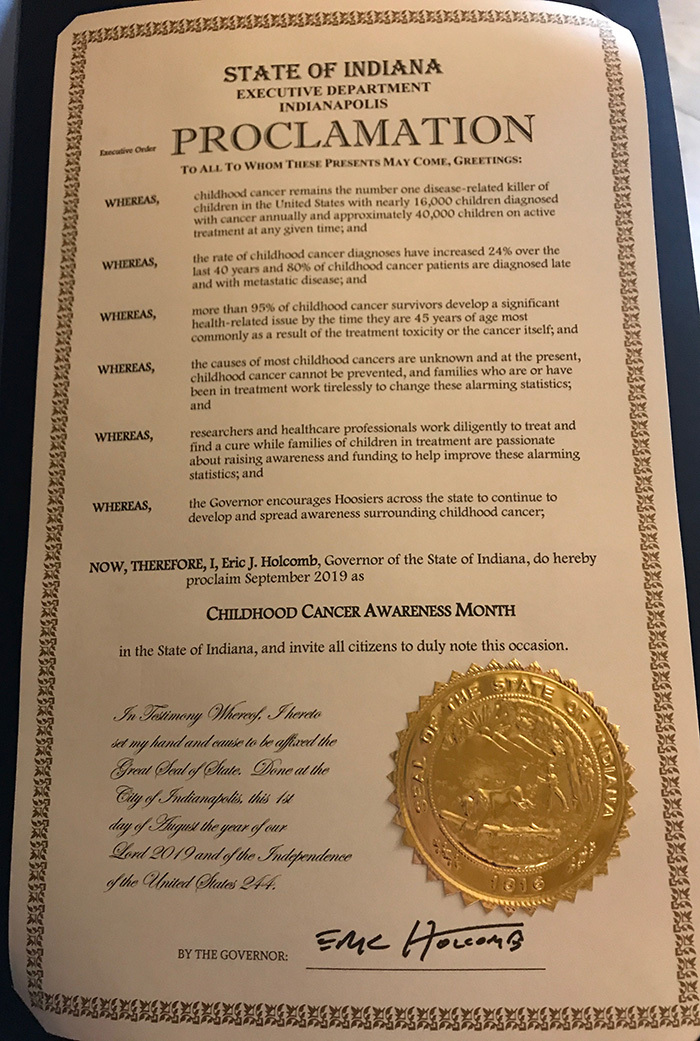 Like so many other parents in Central Indiana and around the country, Heather and Kevin want more research and funding for the treatment of pediatric cancer.

Additionally, IPL will light up its building on Monument Circle with a gold ribbon and the words “Fight Like a Kid” the last week of September.

While the past year has not been easy, the family has seen many moments of beauty along the way, Heather said.

“We have met so many amazing people throughout this journey.”