“Little Hulk” is fearless in his cast

Two-year-old Waylon wears a “shell” on his back to correct infantile idiopathic scoliosis.

The Indianapolis Colts sweatshirt hides the cast on little Waylon Feeback’s torso, but the football shirt fits his tough-as-nails personality. 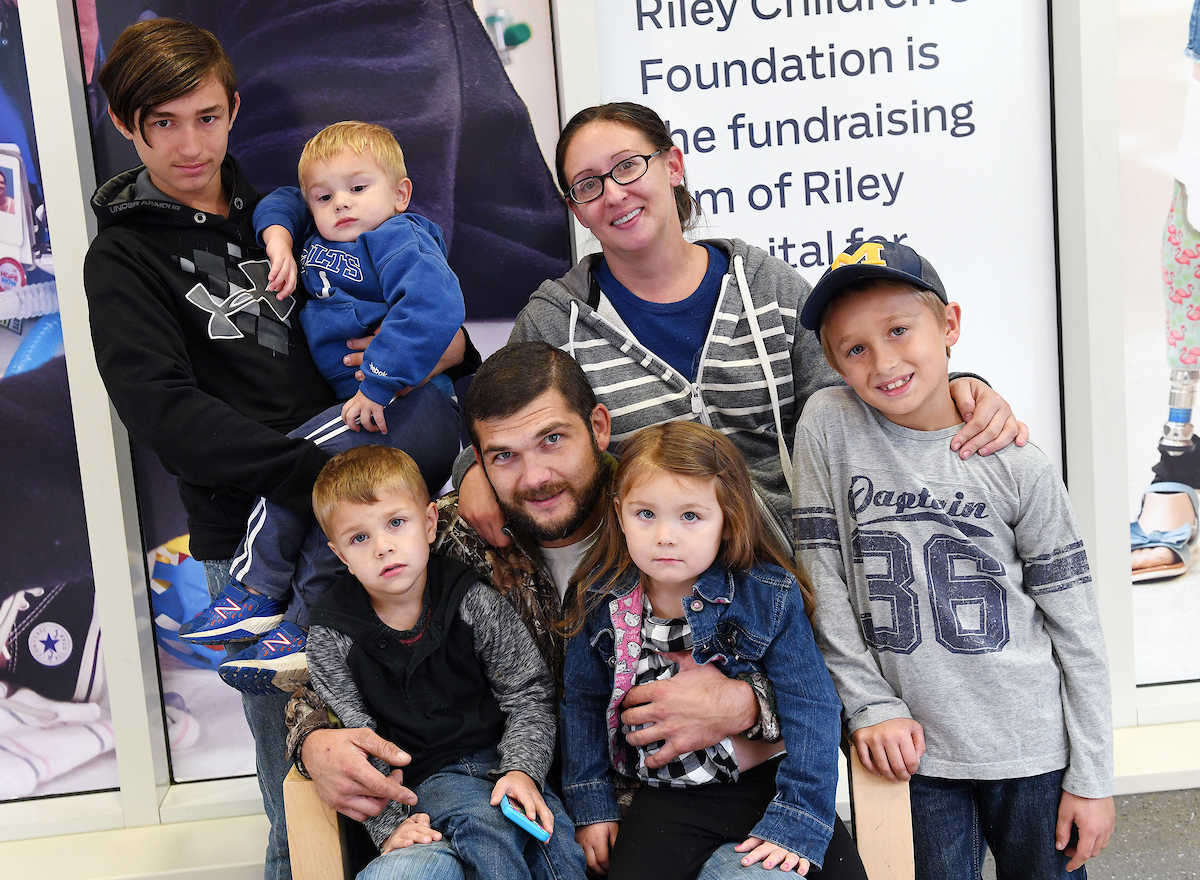 As tough as a 2-year-old can be anyway.

Waylon is named for the late recording artist Waylon Jennings – whose birthday (June 15) he shares. His parents, Jason Feeback and Shay Powell, even tagged him with a nickname taken from one of Jennings’ albums.

“We call him WayMore because he’s way more than we bargained for,” Powell said as she watched her youngest stomp his feet to the music of a volunteer playing the guitar in the lobby of Simon Family Tower at Riley Hospital for Children.

Waylon was diagnosed with infantile idiopathic scoliosis (curvature of the spine) when he was about 18 months old. His mom had noticed that he sat a little crooked, but it didn’t register at the time as a concern. She feels guilty for overlooking it, but she also advocates for more scoliosis screening of babies at least by their 1-year checkup.

“I have five kids, and they’re all different. I just thought he sat different,” she said. “I can’t believe I didn’t see this.”

It was her mother-in-law who pointed out what looked like a swollen shoulder blade. When they went to get it checked out, the doctor sent Waylon for an X-ray, which detected a 56-degree curve in his spine. 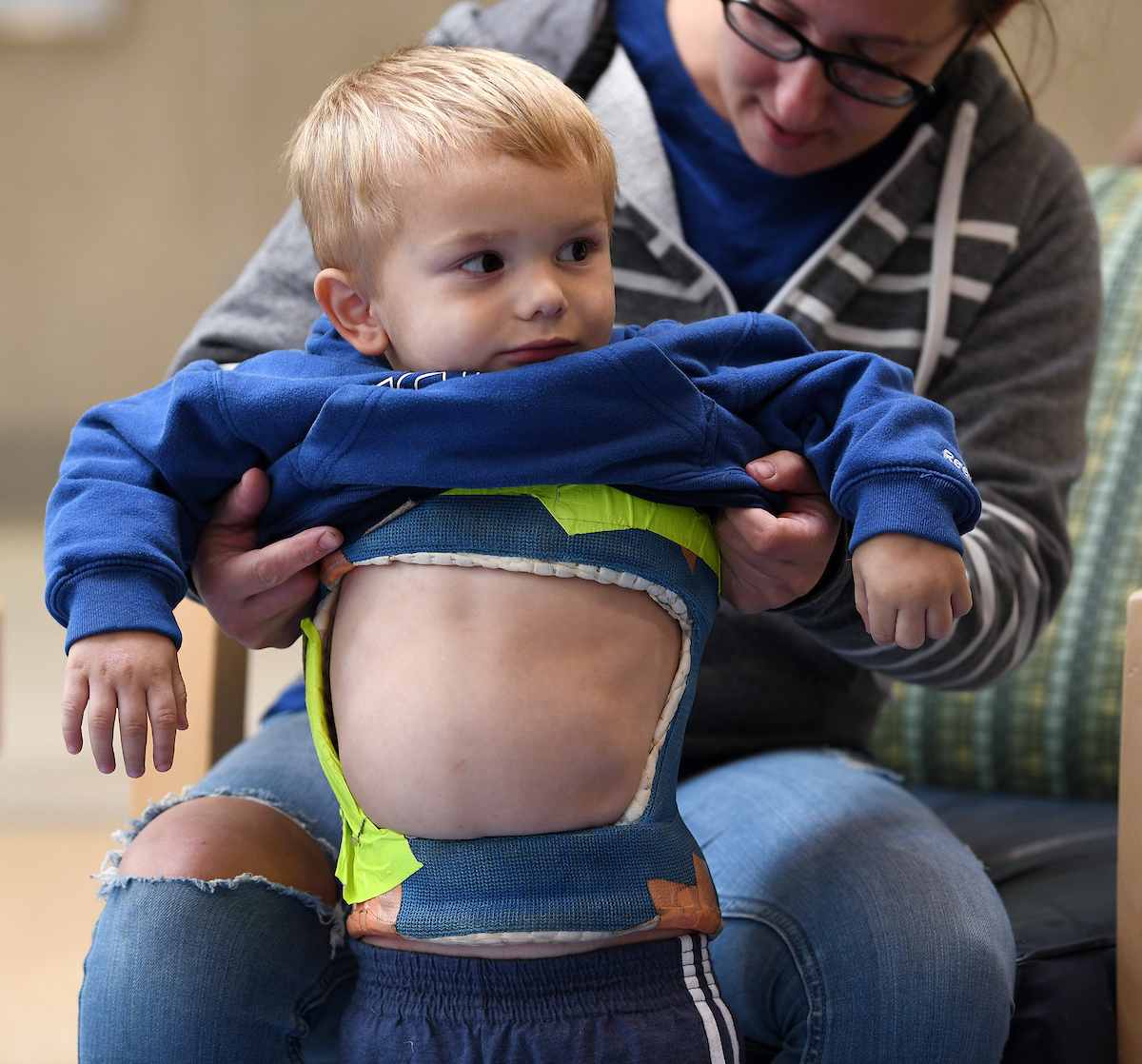 The family came to Riley to consult with Dr. Ryan Fitzgerald, an orthopedic surgeon who recommended a series of partial body casts to slowly correct Waylon’s crooked spine.

The condition itself is rare in infants, the surgeon said. But it also offers the best chance for correction if caught early – before a child is 18 months old. Even then, success rates are greater for kids with curvatures of less than 50 degrees.

“This is one of the only scoliosis conditions that can be reversed and cured with casting,” Dr. Fitzgerald.

Waylon’s case is a little more severe, he said. The boy is doing well with treatment, but it’s possible his scoliosis won’t be completely cured with casting. Time will tell.

For now, Dr. Fitzgerald said, “We’re giving him the best shot at delaying surgical treatment, if not curing his scoliosis.”

The concept of casting made sense to Powell, who has a flower business, but the process is something else entirely.

“When one of my plants is growing crooked, I stake it to keep it straight,” she said.

In the case of her baby, it’s traumatic – for her if not him.

“It was really scary at first. I know what to do with a cold or scrapes, but I don’t know anything about the spine,” she said.

About every seven weeks, Waylon gets one cast off and another put on under anesthesia. He’s now on his fifth one, and Powell is hopeful, while still acknowledging the challenges ahead.

“We don’t know how long he’ll be in a cast; it’s a process,” she said. “His spine is still flexible.”

X-rays taken in the cast show improvement – by approximately 30 degrees – Dr. Fitzgerald said, but images taken out of cast at the six-month mark did not show a measurable change. His spine reverted to its original curvature when the cast was removed.

It’s possible he just hadn’t grown enough in the six months, the doctor said. At the least, the cast is holding his spine in a straighter position.

Still, the news was tough for Powell, who had a good cry before adjusting her sights down the road.

“We will do another out-of-cast X-ray in January,” she said, adding that she refers to Waylon as “momma’s crooked little flower.” And, like her plants, “I’m feeding him, giving him water and sunlight and just hoping he’ll grow.” 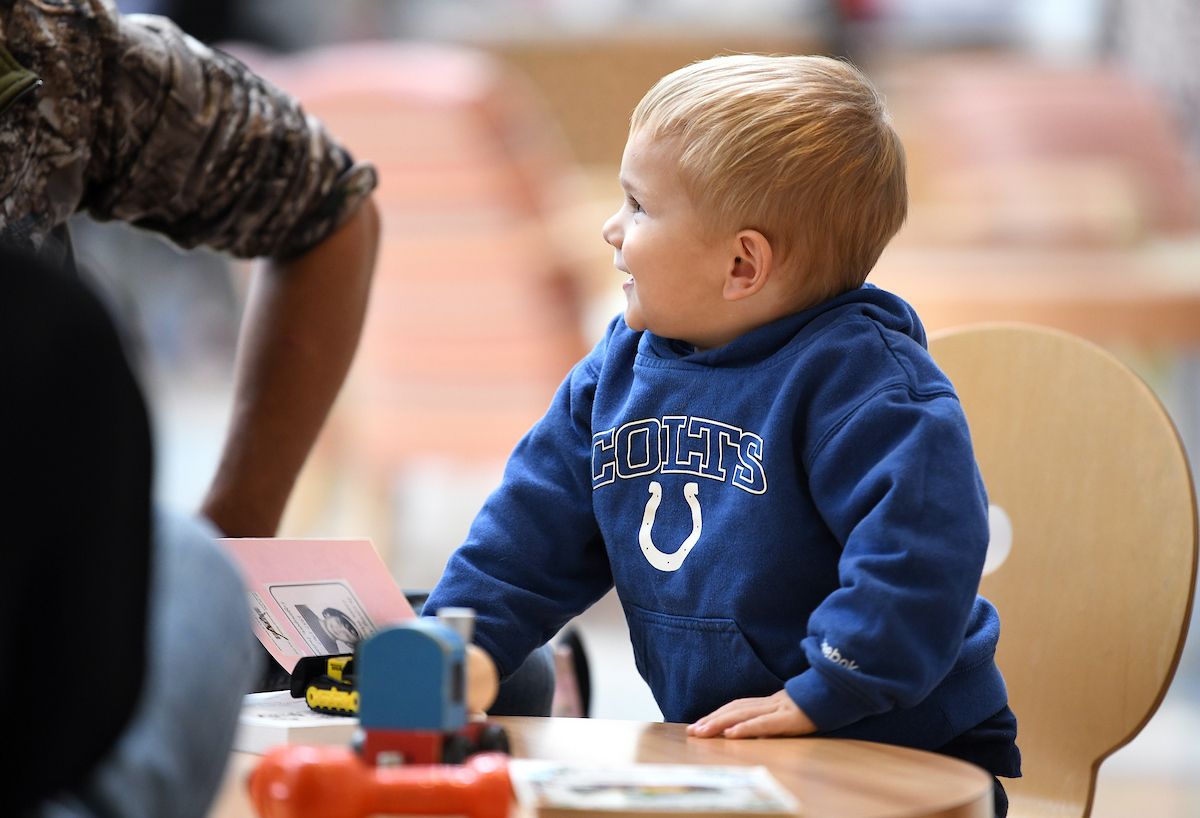 Meanwhile, Waylon has adapted smoothly to the waterproof cast he wears 24 hours a day. Unlike traditional casts, the waterproof model means he can take baths and swim, just like his siblings.

That has made life at home much easier on the family, his mom said.

“We were at the baseball field all summer with my 8-year-old. I let them play in the mud puddles, then spray them down when they get home. We’ve had no problems with the cast.”

While there is no published data on the benefits of waterproof casts, anecdotally, results have been similar to those of the standard casting technique, Dr. Fitzgerald said.

The physician is working to collect more high-quality data on casting treatment worldwide as part of the Pediatric Spine Study Group. He and hundreds of his peers around the world are pooling patient data in an effort to standardize treatment.

Waylon, who likes to strike an Incredible Hulk pose, is fearless in his cast, his mom said.

“We have two big dogs, so he gets knocked down sometimes but doesn’t get hurt. It’s like he has a shell,” she laughed. “We call him our little Hulk. He’s hilarious.”

She’s pretty sure her little guy will be a wrestler someday like his older brother, who won a state championship title two years ago.

“I can’t wait to get his spine straight and get him out on the mat. He’s a beast.”