Little by little, Jack is coming back

The tumor could have been growing in the little boy’s head since he was born. After successful surgery, then a setback, the 3-year-old is learning how to walk and talk again.

Bits of the old Jack flash before his parents’ eyes. The laugh, the twinkle in his eyes, the stubborn refusal to put on his shoes. 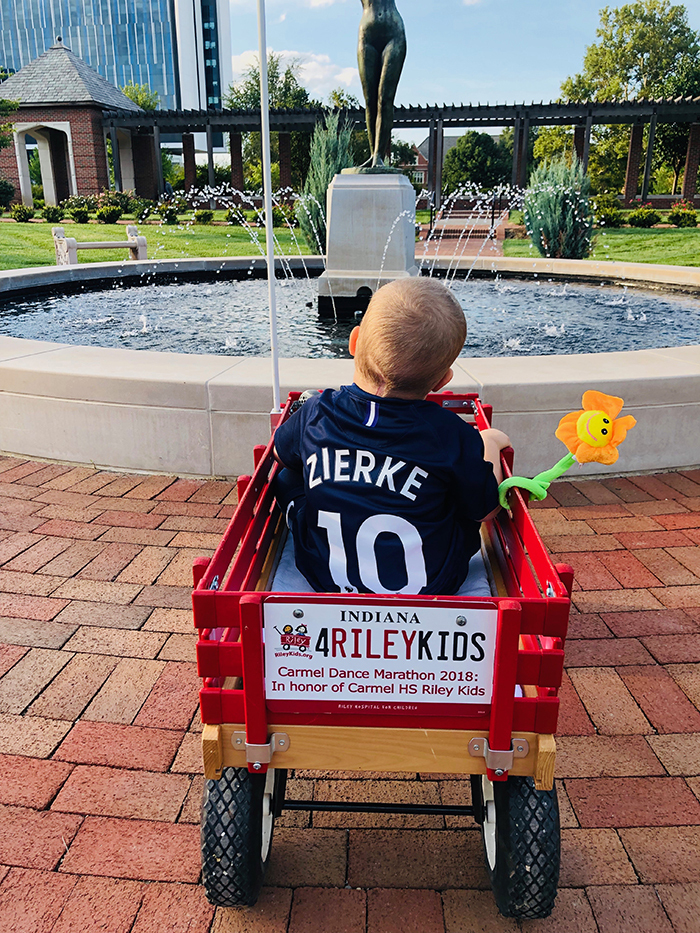 That’s the Jack they want back – the 3-year-old boy who was larger than life, his dad said. Loud, daring, willful, funny.

It was about a week after the family returned home to Indianapolis from a Chicago Cubs game when Jack Zierke began acting strangely.

He woke up July 16 and started stumbling and bumping into doors, his dad recalled.

“I thought he was being silly and asked him to stop,” Jason Zierke said.

Their neighbor, an emergency room physician at Riley Hospital for Children at IU Health, recommended they take Jack to Riley’s emergency department. 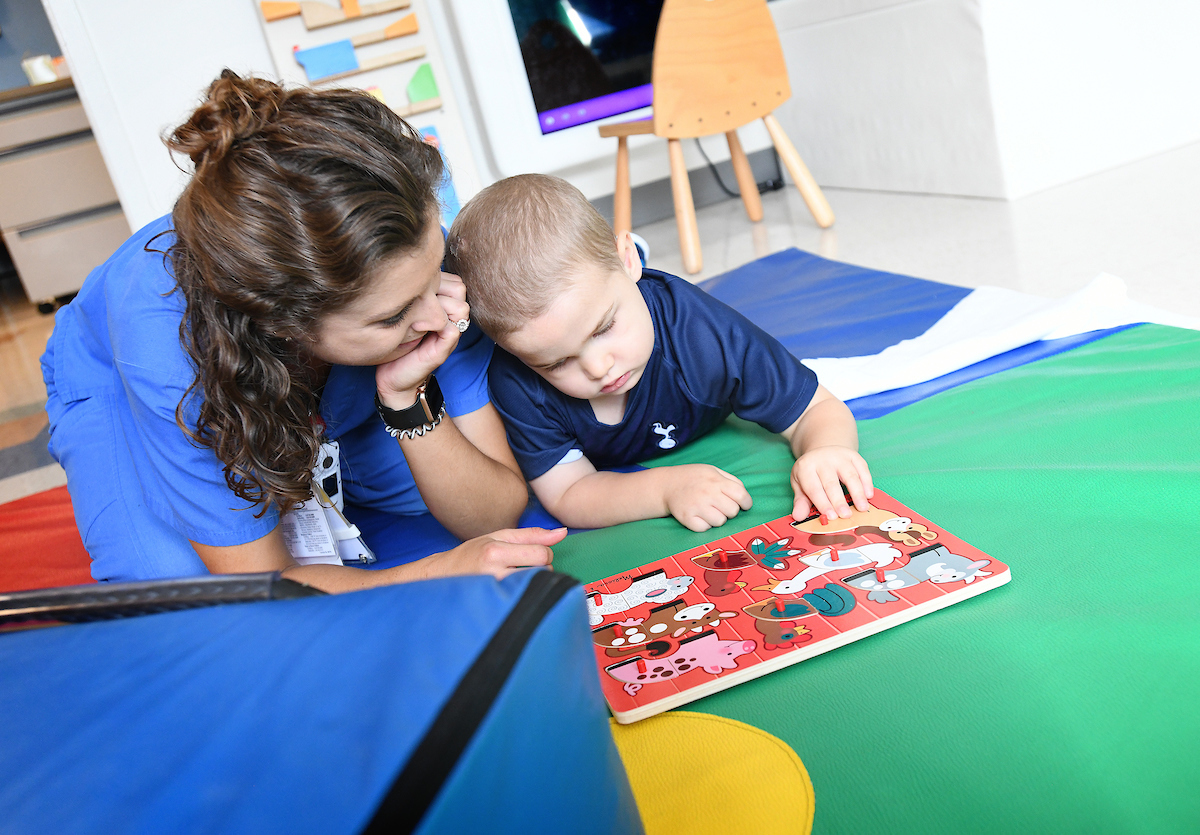 That’s where they found the tumor in his brain. It was about the size of a golf ball, and doctors think it had been growing since birth.

A pilocytic astrocytoma is a low-grade glioma – a family of slow-growing tumors that are generally benign and treatable.

Jack had surgery at another hospital to remove most of the tumor. When he woke up in recovery, he told his anxious parents, “I still don’t feel good.”

But he was talking. That was a good sign.

By the next day, however, he was barely verbal, Jason said. “For the next four days, he was in another dimension.”

Jack had suffered a phenomenon called posterior fossa syndrome, which can cause loss of speech and motor activity.

Within a week, Jack was transferred to Riley for intense physical, occupational and speech therapy. That was in late July.

When he arrived, he wasn’t talking and he was barely moving, his dad said.

But he worries about the day when Jack’s care team might say he has plateaued. That he is as good as he is going to get.

That day is not here yet. 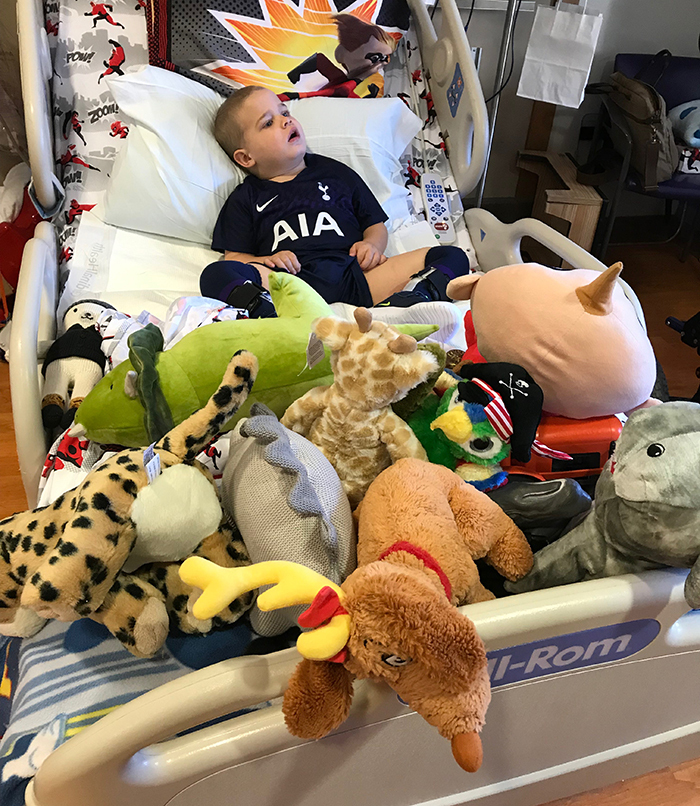 When Jack arrives for physical therapy with Riley therapist Kristina Davey, he is clutching a menagerie of stuffed animals – all there to give him comfort and courage. These are just a few of his favorites. On his hospital bed is an entire zoo full of critters.

Jack is finding his words again, stringing together phrases, sometimes sentences with effort. He can’t walk unassisted yet, but he is making progress, said Davey, who has worked with him for about a month.

“He’s a hard worker, and he doesn’t give up,” Davey said. “He works through it.”

That’s the stubbornness in him, his dad said.

Much of his therapy has a sports theme because Jack loves sports. His older brother, Will, plays soccer, and Jack can’t wait for the day that he can play too.

In fact, today he is wearing his Zierke soccer jersey and showing how he can kick one leg from his wheelchair.

Davey has built a small tower of blocks for Jack to “power punch.”

“We never have a hard time engaging him in a play activity,” she said.

But before he can do his karate chop, he has to walk several feet over to the stack, and that is painstaking work. It takes firm support and guidance from Davey coupled with sheer will on Jack’s part to get his feet moving in the right direction.

He’s very motivated and wants to move, Davey said, but persistent ataxia resulting from the posterior fossa syndrome leaves him unable to control some of his arm and leg movements.

“We don’t know how much it will improve, but he works super hard and he’s gotten so much more strength,” she said.

Everything Jack does can be a form of therapy. Picking up cereal at breakfast. Grabbing gummy bears from his dad as a reward for walking. Even yelling outside. These are part of his daily routine beyond therapy.

Jason said he tries to take Jack outside on the hospital grounds when he can just to look at the sky and remind his son of the world waiting for him. When they go out to the garden, they take turns shouting “I’m gonna walk.” 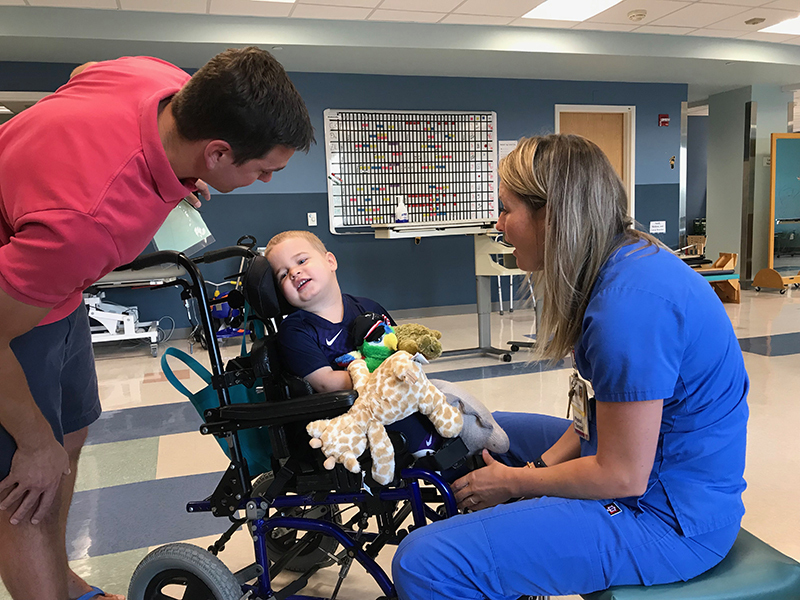 It’s a powerful motivator for both father and son.

Speech therapist Abby Gorman says the ataxia affects Jack’s speech, so they work on activities to strengthen and support his voice as well.

As if on cue, Jack says slowly and a bit shakily, “I want my baseball uniform.”

That’s because he’s going to an Indianapolis Indians game with his therapy team on this day. And that’s pretty much all he has on his mind, even as his dad tries to coax him into eating more breakfast and taking his medicine.

Jason, who alternates days at the hospital with his wife while both continue working, said he has tried not to change too much how he treats Jack, “though I’ve definitely become more patient,” he said. “He doesn’t go into timeout as much or get in trouble like he would in the past.”

Since he’s been at Riley, their youngest son has been coming back to them little by little, Jason said. Though at first, they weren’t sure what to expect.

“We hoped he was still in there, but that was tough. Now we just know he’s too darn stubborn not to. He’s hard-headed.”

Jack is expected to remain at Riley until Sept. 11, then continue with outpatient therapy while doctors monitor what’s left of the tumor.

His son has the drive to push through this, Jason said.

And family and friends are helping Jason and Lauren push through as well.

“I think he’s got the best shot,” Jason said. “Now it’s kind of up to God and medicine. We’re hoping we can have if not a full, close to a full recovery.”