Nineteen-year-old Preston Lewis used his Make-A-Wish gift to set up a foundation for kids who are interested in the world of racing. Now he has the Baja 1000 in his sights.

Preston Lewis once lived in the rough-and-tumble world of Motocross racing. That was before cancer came along and turned his world upside down.

Today, the 19-year-old southern Indiana resident is cancer-free after three years of grueling chemo treatments at Riley Hospital for Children at IU Health. His Motocross days are over, but racing still has a hold on his heart and now he’s sharing that passion with other teens. 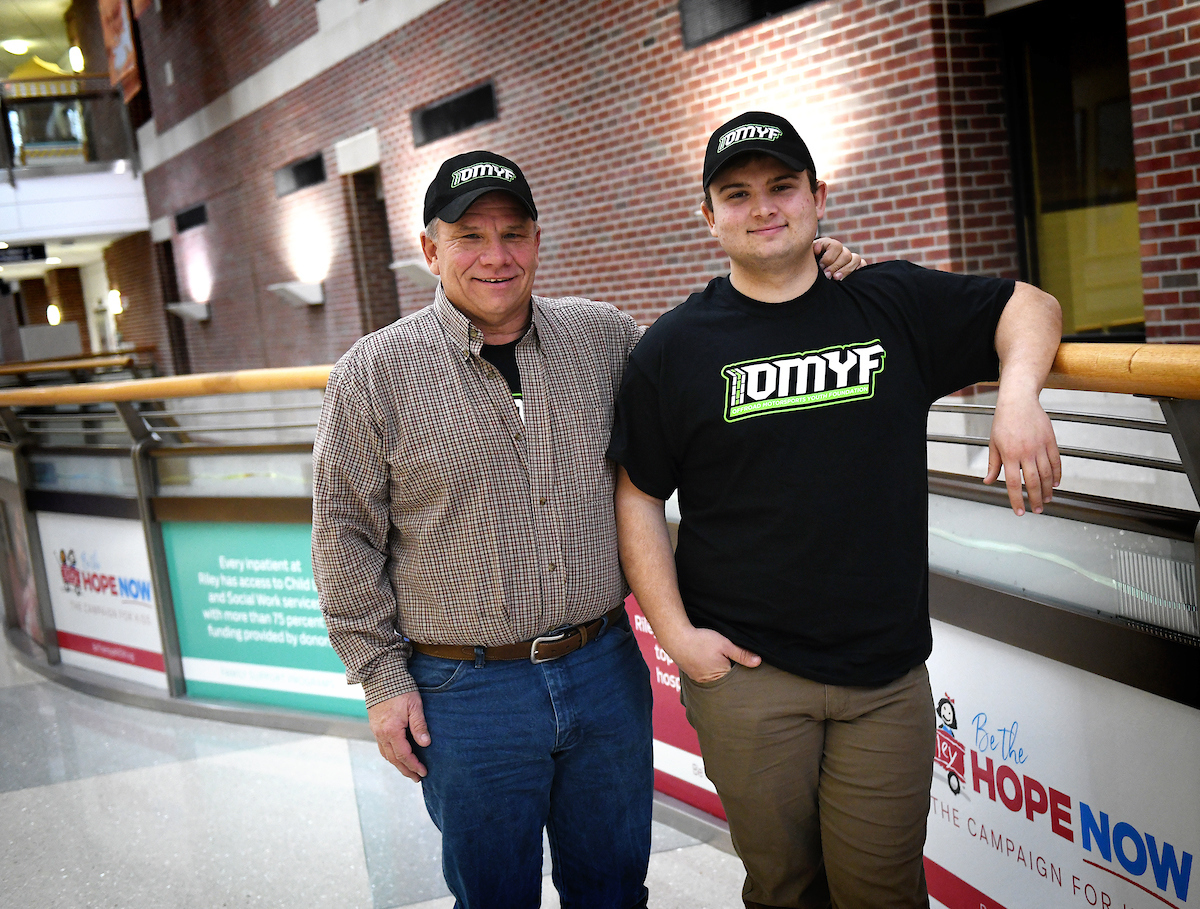 It was during the long stays on 5 West at Riley that Preston and his dad, Shannon Lewis, would walk the halls and talk about “their next big thing.” Sure, it was a way to keep father and son focused on life after cancer, but it evolved into a mission neither even dared to dream.

“It will drive you nuts sitting in a room staring at the same four walls day in and day out, so we would walk the hall around the unit,” the teen said. “Dad and I would spitball ideas.”

Out of those ideas, Off-Road Motorsports Youth Foundation (OMY-Foundation.org) was born, nurtured during the weeks and months that Preston lived at Riley, and crystallized in conversations with the Make-A-Wish Foundation, which agreed to help Preston form the foundation in lieu of a more typical dream trip offered to children facing serious illness.

Now that Preston has won his race against leukemia, he has set his sights on a different kind of race – the Baja 1000 in the year 2022. It’s a 1,000-mile, 18-hour desert race down the peninsula of Mexico. It’s said to be the hardest race in North America, and Preston wants to be there and take lots of other people along for the ride, especially young people who are searching for an opportunity in life.

None of this might have happened if not for the gentle prodding of Preston’s mom, Rachel Lewis. She came from a racing family herself and supported her son’s racing dreams, starting when he was just 5 years old in their hometown of Oakland City, Indiana, 36 miles north of Evansville.

In a cruel twist of fate, Rachel was diagnosed with brain cancer in the midst of Preston’s own cancer treatment. It was a lot to bear for the family, which also includes Preston’s younger brother, Sheldon.

“My mom was a huge influence,” Preston said. “It would have been easy to give up; no one would have faulted me. She kept pushing me.” 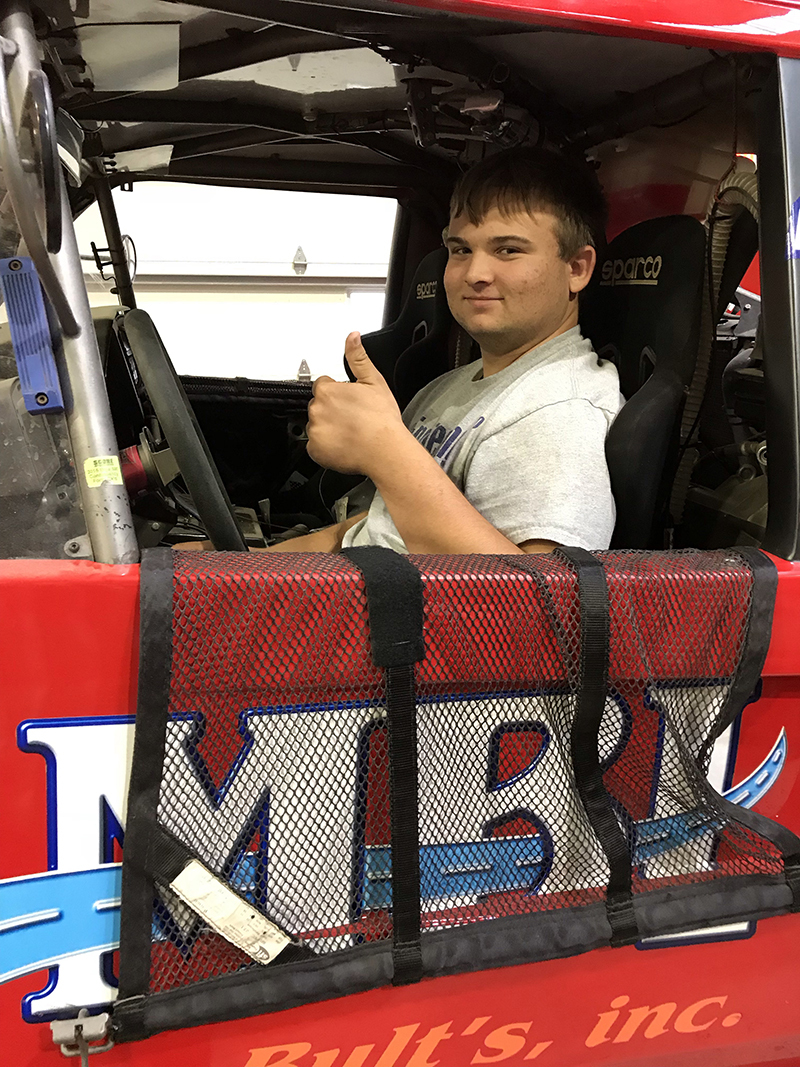 Rachel lived to see her son graduate from high school with a 4.0 GPA, successfully finish his cancer treatment last July and close in on his goal of setting up a racing foundation. She died three months ago.

In December, he officially launched his foundation with Make-A-Wish providing marketing, media and technical support.

Preston and his dad – both wearing hats and shirts advertising the foundation – are back at Riley on a Friday afternoon for Preston’s monthly follow-up with his oncology team.

Other than some lasting joint and muscle pain, Preston says he’s doing well after treatment. He has regained the 30 pounds he lost, as well as the strength he needs to work in his dad’s auto shop, doing repair work and custom fabrication. He is also enrolled at the University of Southern Indiana, studying mechanical engineering.

Coming back to Riley is “pretty much all positive for me,” he said. “Without this place, I wouldn’t be here.”

He and hematology-oncology nurse Rhea Watson hit it off when he was in-patient, and the day he was moved to outpatient care, there she was again. Both started in the outpatient clinic the same day after she switched jobs.

Watson, a Riley leukemia survivor herself, has a special connection with her patients. She understands the curve ball they’ve been thrown. Watson was two weeks away from her high school graduation when she was diagnosed.

“Your whole world has suddenly changed,” she said in an earlier interview. “You were just playing softball and now you’re dealing with cancer.”

Like Watson, Preston refused to let cancer take away his dreams. Now, he’s sharing those dreams with other young people – some with cancer, some just needing a break.

“I guess I try to put more effort into helping people a lot more,” he said when asked how cancer has changed him. “When you’re stuck on the unit, sometimes for up to a month, you might get to know a few people. You find someone who is looking for someone to talk to, and you get involved.

“Not everybody survives this,” he added. “We’ve been given the golden ticket I like to call it, a second chance. You have to make the best of it because it might be your last chance. I want to give other kids a golden ticket.” 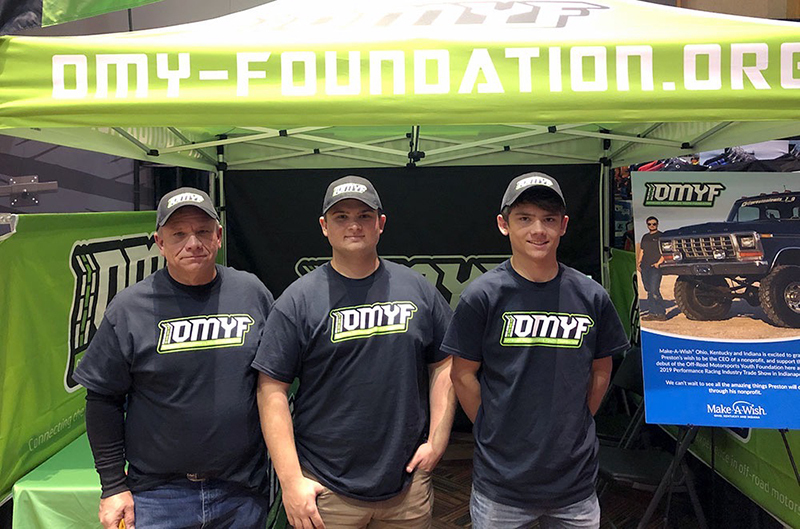 The idea of OMYF is to give kids the opportunity to learn about the motorsports industry through hands-on off-road racing experiences, as well as behind-the-scenes marketing, social media and logistics efforts.

The team is working now to build a shop in Oakland City, where the Class 7100 Unlimited Trophy Truck destined to race the Baja 1000 will be built with support from donors and the sweat of team members.

In the months ahead, Preston and his board of directors will work to seek sponsors and donors for their racing team, and they’ll be selling hats and T-shirts to raise awareness and money for expenses, while also attending trade shows, car shows and cruise-ins to spread their name.

He also hopes to stir up interest in young people, ages 16 to 20, to become involved. “But we don’t want them to just show up at the race. We want them involved in all aspects of it – fabrication, design, building, testing, social media, marketing, logistics.”

The idea is to give young people the skills they to work in the racing world or any business they want down the road, skills Preston says they can only get with hands-on experience.

“We want to be a stepping stone for kids who want to get involved, to give them the tools to go and do much greater things, a lot bigger things than they ever thought they could.”

Preston has a vision that in two years’ time, he’ll have a modified race truck ready to compete in the Baja 1000. Before that big day, he’d love to bring the truck to Riley and let any child who wants to sign it.

The teen doesn’t let naysayers get in the way of his goals.

“Every time someone tells me that won’t work, you can’t do that, I say ‘watch me.’ You gotta go for it.”