Left For Dead In Drive-By Shooting, Ty-Juan Is Tougher Than Anyone You’ll Ever Meet

Three years ago on March 31, Ty-Juan Preer suffered a spinal cord injury and was paralyzed. When people see him take steps on his own with a walker, it looks simple. But no one really knows how unbelievably tough it has been for Ty-Juan.

To be honest, Ty-Juan Preer would rather be anywhere but here -- inside a gym at the hospital doing physical therapy.

But he comes every week, week after week after week. For the past three years, Ty-Juan has come twice a week to Riley Hospital for Children at IU Health.

He’s come to fight and persevere. Roughly 312 times, he’s come to sweat and feel the frustration. He’s come to laugh and see his hard work’s reward.

He’s come to prove them all wrong.

“People said I can’t do it,” 11-year-old Ty-Juan said this week when asked what has pushed him to battle, to keep forging ahead.

But Ty-Juan can do it.

On Wednesday, he walked. The once paralyzed 8-year-old walked.  He stepped onto a treadmill with his braces on and his legs took strides for 10 minutes.

And for the first time, he stood up with no support at all. No braces. No walker. Just Ty-Juan standing like he used to.

When people see Ty-Juan stand and jab at a punching bag, or stand and shoot a basket or take steps on his own with a walker -- his legs in braces -- it looks simple.

But no one really knows how unbelievably tough it has been for Ty-Juan.

“It’s hard to get 11-year-old kids to put a dish in the dishwasher. And Ty has to work super hard to get out of bed in the morning and super hard to get to school and then to get around school,” says Sarah Johnson, Ty-Juan’s physical therapist, who has worked with him since the beginning. “He does it and it’s hard. He’s had a big life change.”

Ty-Juan was playing outside the used appliance store where his dad worked during spring break on March 31, 2015. Ty-Juan was 8 years old, free from a week of school, free to play outside.

The bullet came out of nowhere. It hit Ty-Juan in his left arm and exited out the right side of his back. Ty-Juan fell to the ground unconscious. 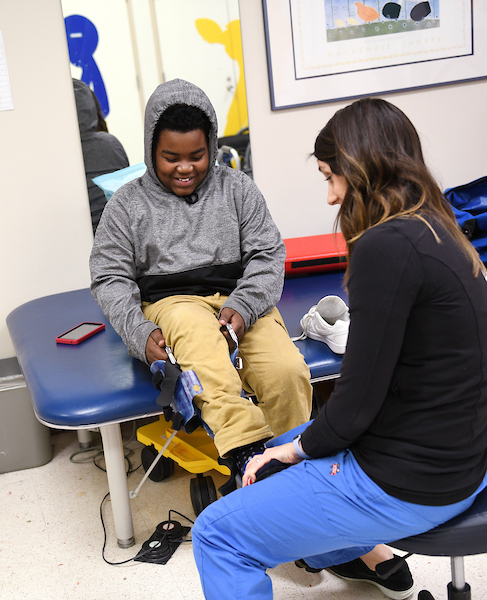 It was a drive-by shooting of the absolute worst kind, one that left an innocent boy, with a lifetime of dreams ahead -- shattered.

As Ty-Juan took a break from therapy this week, Johnson asked him: “What do you want to be able to do a year from now?”

There is a look of sadness from his parents. “That’s been his dream since he was 2,” his dad says.

To play football – to run and tackle and pass. Before the shooting, Ty-Juan played running back for his youth football team.

Ty-Juan may not ever play football again, but then again, he might. He keeps proving everyone wrong.

“It’s a blessing from where he was to where he is now,” says Shenetta Preer, Ty-Juan’s mom. “He’s still a work in progress. But it’s a blessing.”

He is practicing walking with his braces unlocked, so his knees bend and he gets more movement.

His quads and his abs and his arms are getting so strong, Johnson says. As Ty-Juan sits on the table, he can use his quads to lift his legs.

Johnson marks out courses for Ty-Juan to walk, and he tries to beat his time each week. When she gives him a new task, Ty-Juan is determined to do it. 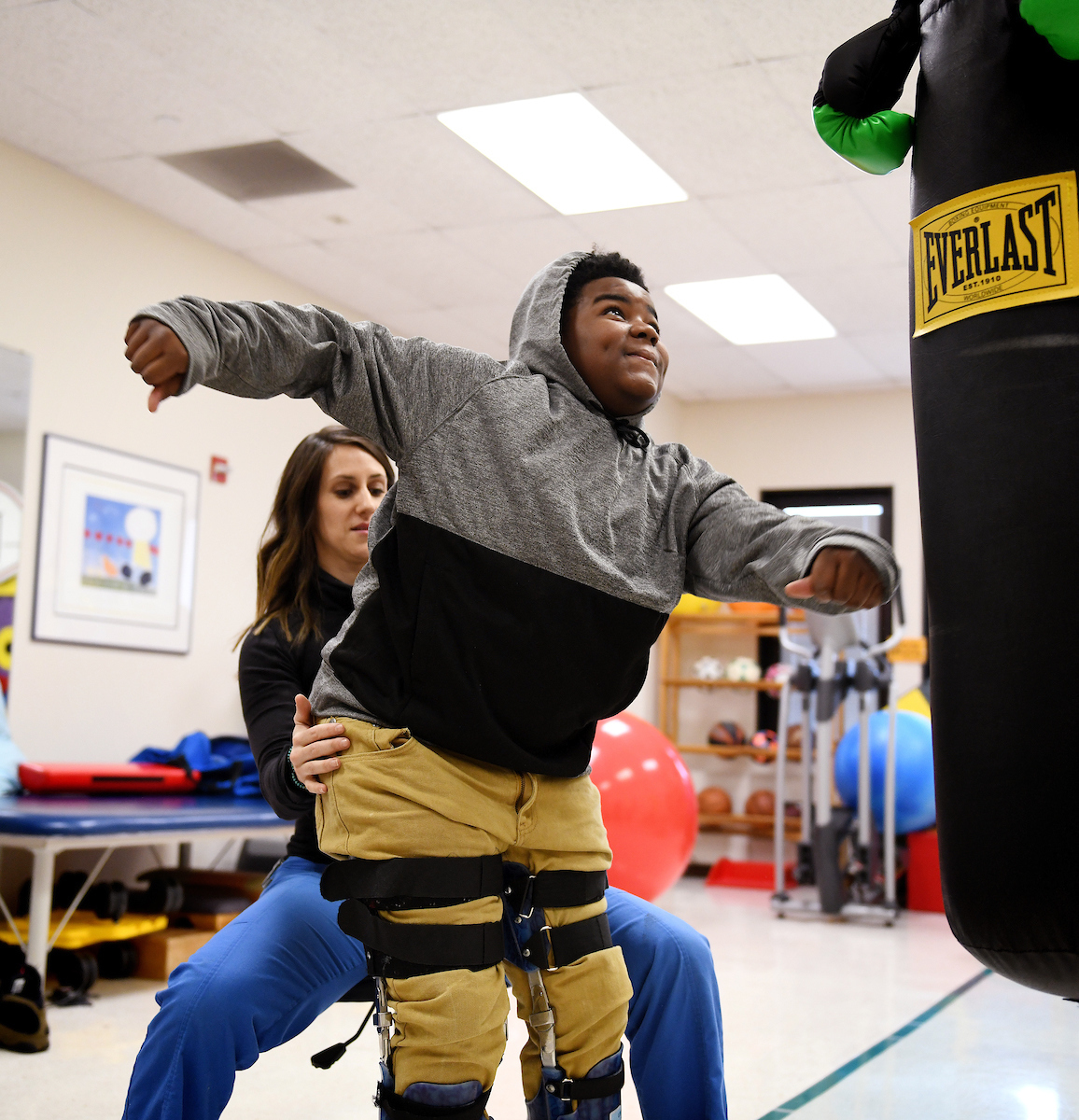 Yes. Ty-Juan does the hard work. But he also has a family system that has pushed him, Johnson says. He has parents who have made sure he is at Riley twice a week, without fail.

And he has parents who are working with him every single day at his Indianapolis home. There are no easy passes, Shenetta says.

“We make him do everything by himself,” she says.

But Ty-Juan still needs help. And he still relies on braces and a walker. At school, he uses a wheelchair.

Johnson’s dream for Ty-Juan is that one day soon he will be able to be rid of all that equipment, that he might be able to get exoskeleton braces. It’s a sleek technology for people with spinal cord injuries.

Ty-Juan would be able to put them on, rid of the bulk, and walk. Insurance doesn’t pay for the braces, which cost nearly $100,000 a pair.

But if anyone deserves them for all his hard work, it’s Ty-Juan, Johnson says.

“He works super hard and does great with challenges,” she says. “Tell him he can’t do something and he’ll do it.”