“Kids can get to you, and they got to me for sure”

Dr. Brett Hartman, director of Riley’s burn unit, says his team does incredible work every day, but it’s the children who are the real stars for their resilience.

When the little girl bounds down the hall to give him a hug, Dr. Brett Hartman is reminded why he loves his work.

It is in those moments that the horrific injuries he sees fade into the background, if only for a minute.

Dr. Hartman, assistant professor of plastic surgery and medical director of the burn unit at Riley Hospital for Children, deals with serious burns every day. The Pittsburgh native, who received his general surgery training at Penn State University, was always interested in plastic surgery but had no interest in burns until he came to IU Health to do a burn surgery fellowship “and fell in love with it.” 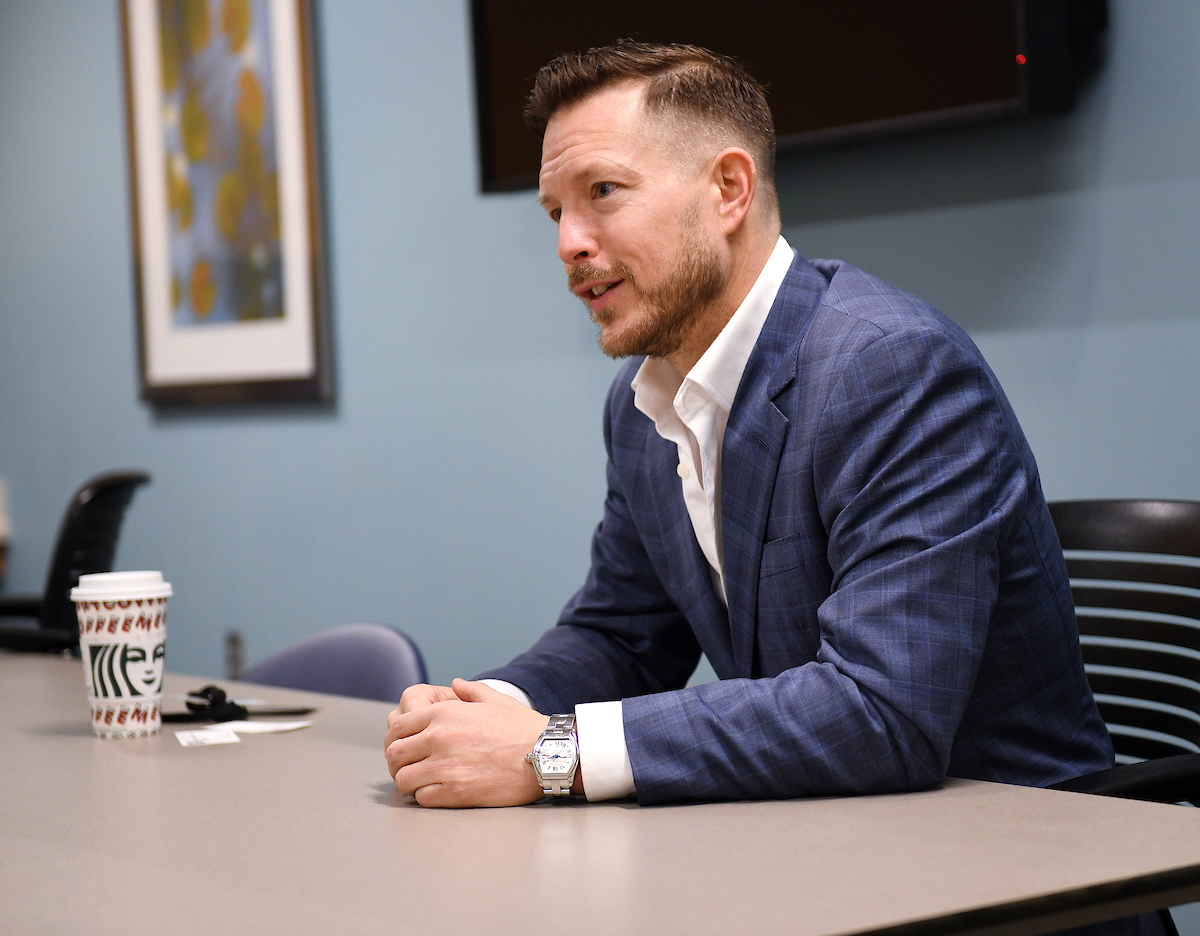 “The reason I love it is the patients, I think,” he said. “I’ve never had so many adults and children give me letters, cards and pictures. Kids can get to you, and they got to me for sure.”

Kids like Lillie, who suffered burns over 68% of her body in an accident at home and has endured multiple surgeries, yet still finds reasons to laugh. And yes, to hug her doctor.

Now in his sixth year at Riley, Dr. Hartman, who also treats adult patients at Eskenazi Health, is most proud of his team for the recent news that Riley’s burn unit has been re-verified by the American Burn Association. Verification by the ABA is the highest distinction a burn unit can achieve.

“I think what’s great about Riley is that we’re a team. It’s obviously not just me, I can’t do this alone,” he said. “From our advanced providers to our therapists to our child life specialists, nurses, social work, school, it’s a team effort. I applaud everybody.”

After working through quality improvement processes and data collection issues, the burn center is now in a position to be re-certified every three years.

“I think that tells the community – patients and families – that we are providing the highest level of care possible. We are the only verified pediatric burn unit in the state and I want to continue that. I want this place to be the best of the best. We have an amazing team.”

Physician assistant Madeline Zieger has been with the burn unit since 1993, and Dr. Hartman says she is what keeps the department humming.

“I couldn’t do this without Madeline,” he said. “She is amazing. She could run this place by herself.”

After 26 years at Riley, Zieger said she stays for the kids.

“I like working with kids and I think everyone here likes working with kids. I think we get to see the full spectrum of the treatment of the child. From when they come in incredibly injured to them getting better to us seeing them as outpatients and following them for reconstruction later on,” she said.

“We see the full span of the illness or trauma. And they get better and we are able to help get them better and return them with spirits that are not broken but rather rejuvenated,” Zieger said. 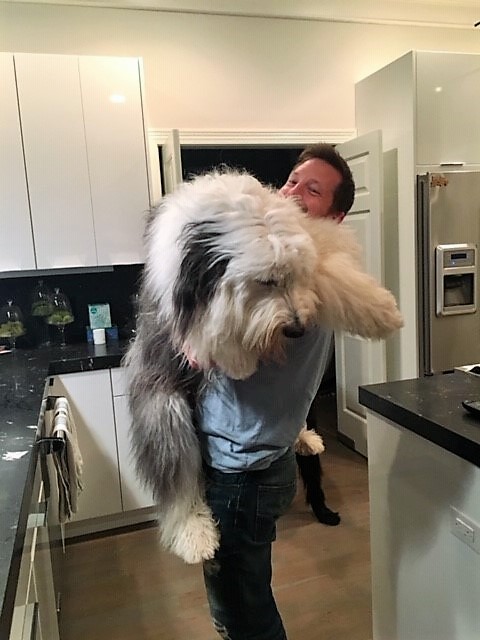 While Dr. Hartman has no children of his own – unless you count his two gigantic dogs Jarvis and Chapman – he does have 11 nieces and nephews, so he’s comfortable around kids – something children can sense.

“He really gets to know the children, and they really like him,” Zieger said. “Some doctors have a hands-off approach, but here, kids will run up and give him a hug. The staff really like him, too.”

“It’s a unique staff who are dedicated to the children. We all work well together, we complement each other. Nobody single-handedly can do it on their own, but together we get things done.”

Riley counts over 3,000 outpatient visits annually in clinic and about 180 in-patient stays, which can last for days to weeks to months, depending on the severity of the burns.

The most common thing the staff sees is scald burns, often suffered when young children pull a hot liquid out of a microwave and spill it on themselves. Dr. Hartman calls them ramen noodle burns because that’s what these children – some as young as 3 – are trying to cook for themselves.

Not every burn requires burn center treatment, but there are very strict criteria defined by the ABA, so almost everything gets referred to a burn center, Dr. Hartman said. Specifically, any burn that is circumferential around an extremity; any burn to the face, hands or genitalia; and anything over 10 percent should be treated at a verified burn center.

He spoke of a patient who was referred to Riley from a hospital in northern Indiana several days after the child was burned over 20 percent of her body.

“The thing with burns that people don’t realize is we have to get rid of all that bad tissue, sooner rather than later,” he said. “This girl had been up there six days. When somebody hits our door, I like to do surgery within the first 72 hours. Once we get the burden of the burn off her, she’ll do much better.” 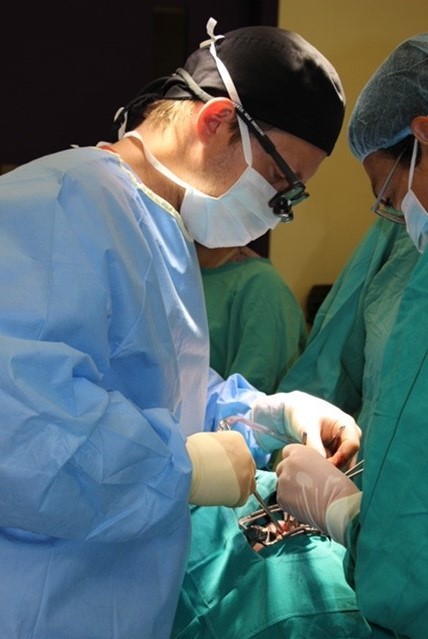 In her case, he said, she would go to the operating room, where her wounds would be cleaned and the damaged tissue removed, then temporary – or cadaver – skin might be put on. After several more days, she would go back to the OR for skin grafts from her own body onto the wound.

“Unfortunately, in order to get burn wounds to heal, I have to take skin (from another part of the body), so now she has multiple wounds to heal. And that hurts.”

Spray-on skin, a revolutionary new treatment approved by the FDA in adults, could change that process. It involves taking a small amount of healthy skin from a patient, dissolving the cells with an enzyme and creating a solution that is sprayed over the burned area. The treatment regenerates the skin, heals more quickly and creates less scarring than traditional skin grafting.

Possibly the worst part of the treatment process for young patients is the daily dressing changes. While the unit has a pain protocol it follows and a child life specialist is on hand, Dr. Hartman is exploring the possibility of using virtual reality to help distract kids from the pain.

“It has been shown to be effective in other aspects of medicine,” he said. “I want to bring that here.”

The surgeon said he has the easier job emotionally, compared to nurses and therapists, because he typically sees the kids for a moment to examine their wounds, again during surgery, then again after their dressings have been changed. By then, he said, “they’re kind of happy.”

“These kids are super resilient, they’re great kids,” he said. “To see them in clinic after all this acute stuff is taken care of and see how well they’re doing is fantastic.”

But it’s not just the physical healing he cares about – the scars are emotional as well.

“Nowadays we can get a lot of people to survive an injury, but the deal for me is what kind of quality of life are they going to have and how is this going to affect their future?”

That’s where Riley also excels, he said. Patients work with Riley teachers during their stay so they don’t fall behind in school, and art therapy plays a “huge role in reintegrating them back into society.” In addition, he said, “the physical therapists and occupational therapists are absolutely amazing.”

Among his goals is to expand mental health access for patients, many of whom suffer post-traumatic stress long into their recovery.

While he says his team makes his life easy at Riley, one of his biggest challenges is educating other physicians and hospitals about the importance of bringing burned children to a verified burn center.

“They need to come to Riley and get the best care possible. We are providing the very highest level of care that a burn unit can provide.”

“I had a steam burn to a 1-year-old’s hand that was taken care of by a primary care physician, and I don’t think they realized the consequences of a burn like that. When the girl came in, her hand had scarred down and stuck so she couldn’t open it. She required multiple procedures to get her hand functional again. A lot of that could have been prevented.”

Dr. Hartman, who minored in art in college and loves to travel, can often be seen in his Old Northside neighborhood walking Jarvis and Chapman – a Newfoundland and an Old English Sheepdog – but his mind is never far from his patients.

“When I take a step back and think about these kids, it’s crazy. But to see them afterward when they’re here in clinic, they yell my name in the hallway and run to me, and it’s the best feeling ever. It makes me feel like I’m doing the right thing.”