IU students have raised millions for Riley. Now a small team has taken that philanthropic passion directly to patients through the Riley Connect Library Cart Program.

The interview for this story was conducted before Covid-19 restrictions went into effect at Riley. The volunteer program has been suspended for the time being. 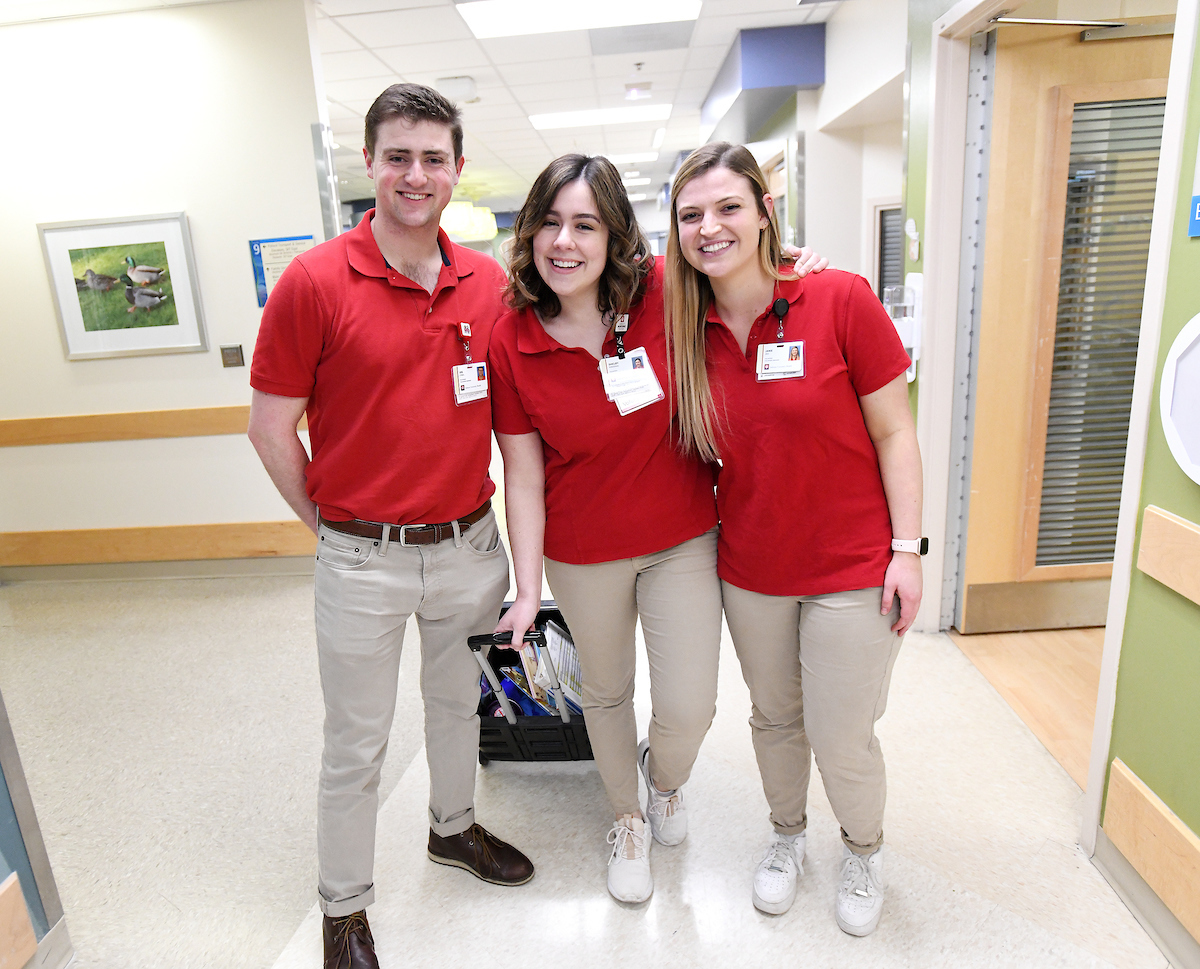 Joe O’Neil hopes to become a doctor someday like his father, and Shelby Rindenau plans to become a nurse. Both are seniors at Indiana University who have fed their passion for children’s medicine by volunteering at Riley Hospital for Children at IU Health.

Together, the two find joy and purpose in visiting sick kids – taking time to read a story, play a game or talk about an upcoming surgery.

Thanks to Joe’s considerable persistence and the support of Susan Schwarz, manager of volunteer resources for Riley, Joe developed the Riley Connect Library Cart Program more than a year ago. Shelby soon joined him as co-chair, and they recruited other students – all members of IU Dance Marathon – to commit to volunteer.

“Joe is a great bargainer,” Schwarz said. “He had an idea, and he was persistent, and he jumped through every hoop I gave him.”

The result is a thriving weekly volunteer program sponsored by IUDM. As of last month, the program is now an official subcommittee of IUDM’s hospital relations committee, which also organizes baby showers in the NICU and meals at the Ronald McDonald House.

We sat down with Joe, Shelby and incoming Riley Connect chair Janie Zeh last week before visitor restrictions went into effect at all IU Health hospitals due to the coronavirus pandemic. While the volunteer program has been halted at this point until restrictions are lifted, we got the chance to see the college students in action – gathering books from the Riley library and wheeling their cart from room to room on the hospital’s ninth floor. 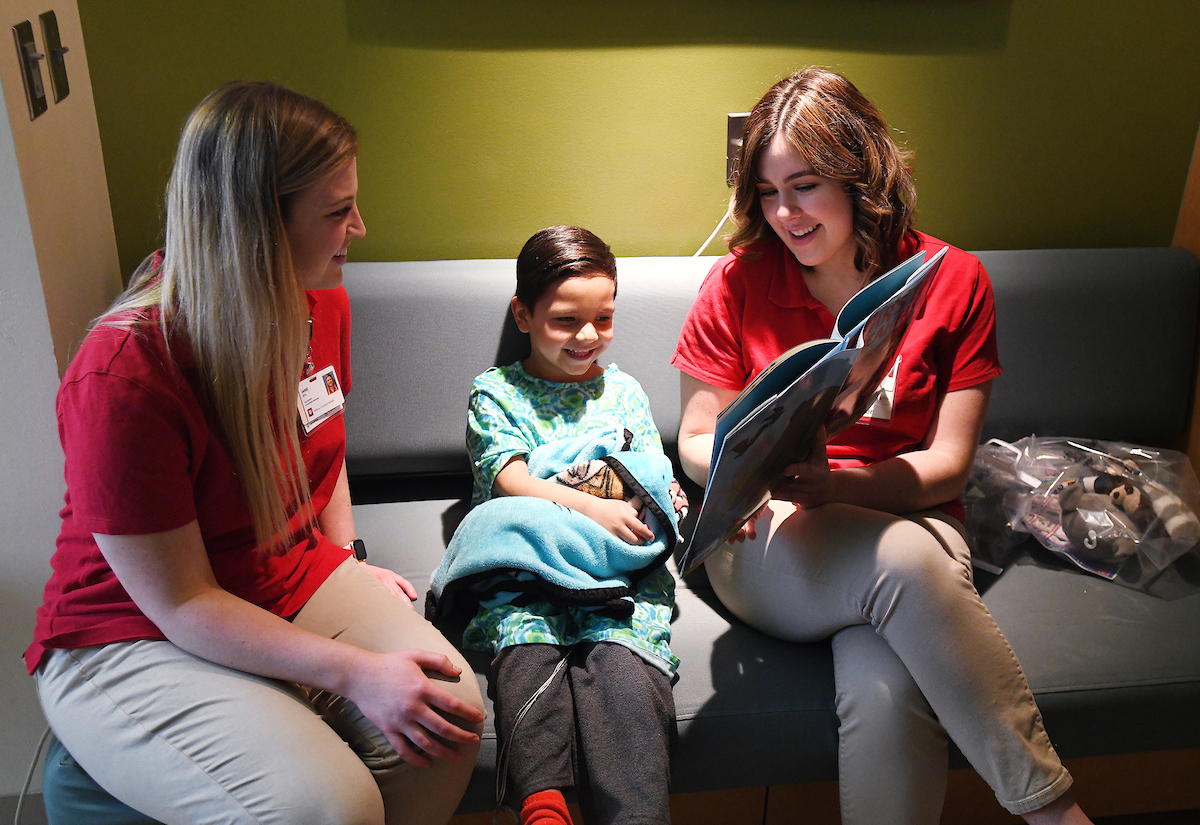 They found a couple of willing patients whose parents were with them, and the magic started to happen as soon as they opened a book. One little boy was shy at first, wanting to keep his mom close while the students took turns reading. Another child had no problem climbing up on a couch between Shelby and Janie while they read “Bear’s Big Breakfast.” The 5-year-old grinned the entire time.

“Anything we can do to make them smile is what we do,” Shelby explained. “We usually get support from the nursing staff to read to the patients because it’s so important in their language and speech development.”

Joe said the idea for the program came to him while shadowing at Riley a couple of years ago and hearing physicians talk about how some patients feel isolated from their peers.

“That triggered something for me,” he said.

Now, the program not only provides an extra level of support for young patients, it also connects IUDM students with the organization’s mission in a real way.

“We see where the money we’re raising actually goes and the difference we’re making,” Joe said.

Every year, IUDM raises money for Riley during its 36-hour dance marathon. In its nearly 30 years, IUDM has raised a whopping $36 million for Riley programming.

“I never thought I would be able to do something so meaningful in my college experience,” Shelby said. “We’ve had a much greater impact that I expected.”

To be a part of Riley’s commitment to protect and promote childhood, even while kids are hospitalized, is a privilege, she said.

Joe, who plans to teach English in Southeast Asia for a year before entering medical school, is thrilled to see the program continue after he graduates from IU.

“The trust that Riley has put in us to do something like this is very special,” he said, adding that his ability to interact and connect with patients in a clinical setting has significantly improved since starting the program.

“To be able to meet a patient on their level and be there for whatever they need – whether reading, playing a game or just talking – is extremely special.” 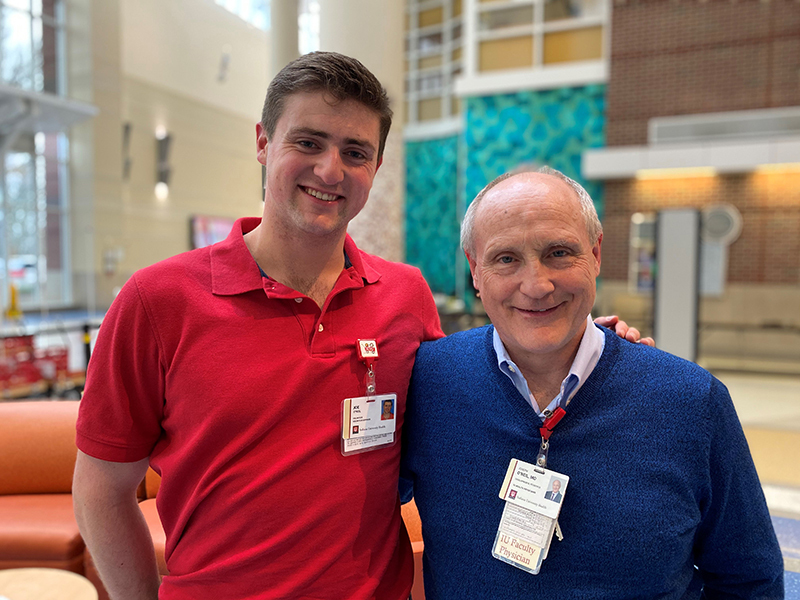 Dr. Joe O’Neil came by to see his son while the younger man was meeting with members of the IU Health social media team. He could barely contain his pride.

“I think it’s absolutely phenomenal what they’re doing,” the Riley physician said. “I take care of a lot of kids with medical conditions who tend to be at Riley for long periods of time, and families can’t always be here. The Riley Connect program is an opportunity for these kids to have someone who is a lot younger than me and can relate to them and make the time they spend here a little bit nicer, a little bit better.”

The IU Dance Marathon Riley Connect program and other volunteer programs will return once coronavirus restrictions are lifted.