Eleven-year-old went from healthy to helpless in a matter of days. Sheer determination and excellent medical care saved her life.

Lacey Miller is a tough kid. So tough that her parents didn’t realize right away when something was wrong with their little girl.

It was just after Halloween last fall when Lacey, 11, started feeling tired. She would take naps after school, and she seemed to be losing weight, but her mom figured she was just slimming down while growing taller. 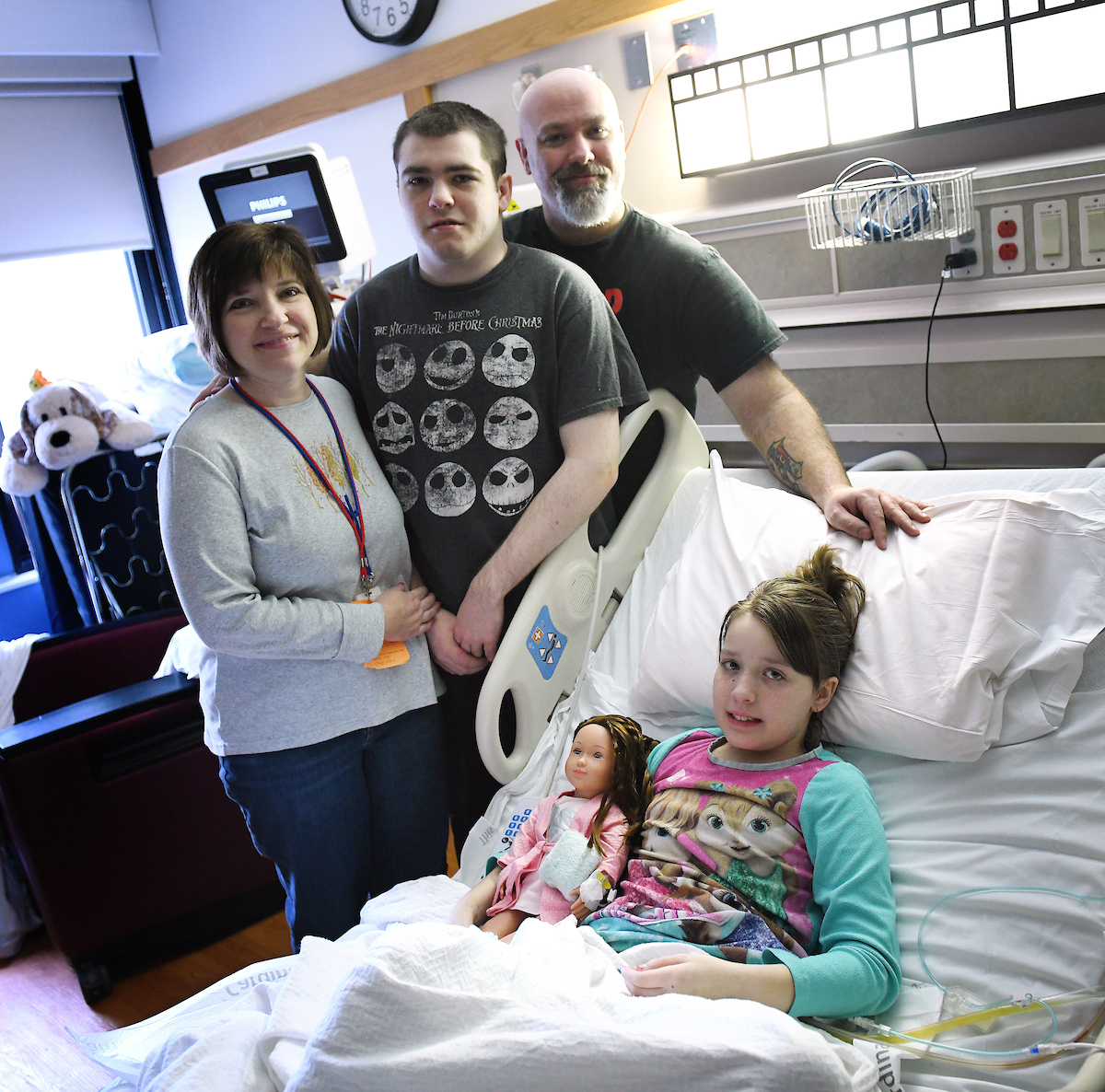 Lacey is a stoic child, Dereck and Felicia Miller say. She doesn’t complain. Still, something didn’t feel right to Felicia.

“I thought she was coming down with the flu. I had decided to call the doctor on Monday,” she said.

Before she could do that, Lacy collapsed at home on Sunday, Nov. 10. An ambulance rushed her to a hospital in Goshen, Indiana, not far from their home. From there, she was taken to a South Bend hospital.

“We still didn’t realize how bad it was until they started putting in all kinds of breathing tubes and IVs,” Dereck said.

Then they heard she would be airlifted to Riley Hospital for Children in Indianapolis, three hours away by car. Dereck jumped into his car and met her at Riley, where he, Felicia and their son Austin would spend the next two months while Lacey battled complication after complication.

Turns out Lacey had type 1 diabetes that had not been diagnosed. Additionally, her intestines were backed up severely, leading to a necrotic bowel, characterized by cellular death due to reduced blood flow to the GI tract. It is a serious and often fatal condition. On top of that, her lungs collapsed at least twice, and she had her appendix and 75 percent of her intestines removed. She also had issues with her gall bladder, liver and kidneys while hospitalized.

It was a lot for the family to endure.

“We were here nonstop until Christmas,” Dereck said, “then I went back to work the day after Christmas.”

Every day at 5:30 p.m., he would walk his wife and son over to the Ronald McDonald House. He would drop them off, grab a plate of food for dinner and eat it as he walked back to the hospital to stay the night. Early the next morning, he would walk back to RMH to pick up Felicia and Austin. Once a week, he would go home to check on their house and pay bills. 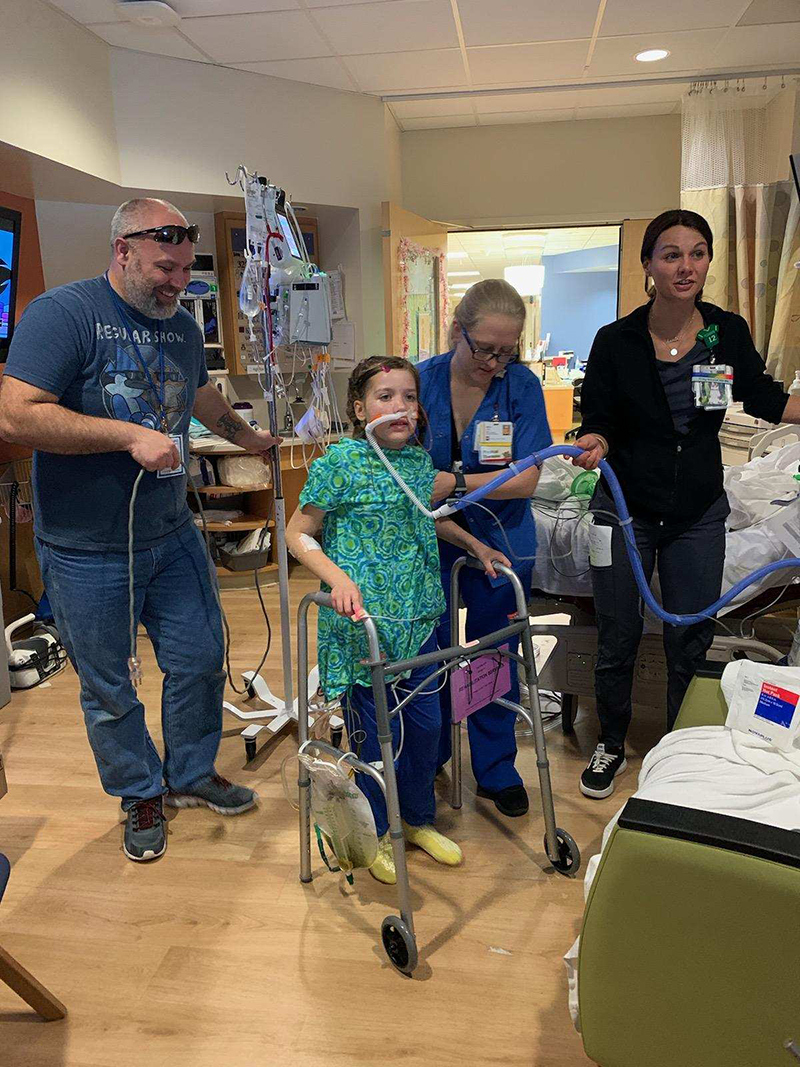 On Christmas Eve, six weeks after she arrived in the PICU, followed by a short stay on the pulmonary floor at Riley, Lacey was well enough to be transferred to inpatient rehab.

While it was good to know she was improving, it was scary to move to a different unit, Dereck said.

“We were so used to the PICU, where you’re tripping over nurses and doctors. It’s a comfort thing, especially when you’ve been there so long and you make friends. It was bittersweet leaving because there are so many nurses you build relationships with. We’ve had good nurses everywhere we’ve gone, but we were there longer.”

One of those PICU nurses, Kelsi Lawless, even presented Lacey with a doll that looks pretty much like the pre-teen. It has her blue eyes, dark hair and freckles. And something else. The doll has a discreet ostomy bag and an IV, just like Lacey.

The sixth-grader, who likes the Beatles and old Sherlock Holmes movies, loves the doll so much she named it Kelsi.

Lawless was impressed by her young patient’s strength throughout her ordeal.

“She is such a little inspiration, a very smart little girl with a lot of determination. I’m telling you, she will be one of those kiddos that changes the world.”

Dereck is an unabashedly proud father. He shares some of Lacey’s talents – art, photography, music and spelling – while she rests quietly in the hospital bed, but he is most proud of her kind heart and her determined nature. 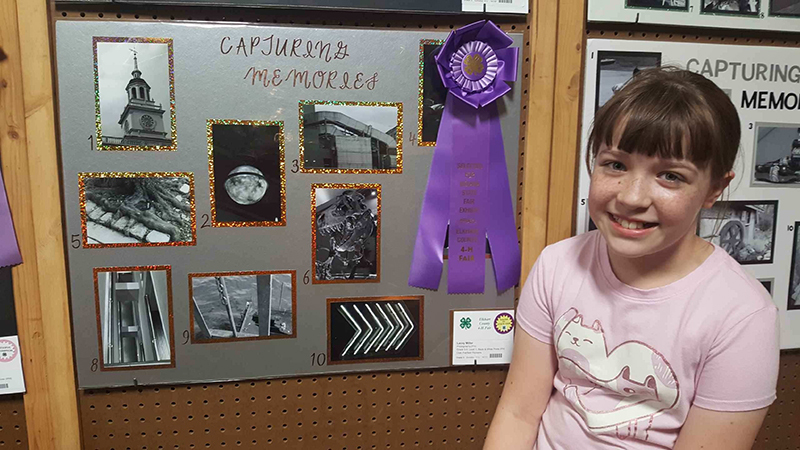 “She’s so sweet, she never wants to offend anybody. Even if something hurts her, she won’t tell you,” he said.

But naturally there have been tears. She even cries a little while she has visitors in the room. Not from physical pain but from the memories of what she’s been through.

“We’ve had talks,” her dad says. “Serious talks. I tell her it’s OK to cry, it’s OK to be mad, but you don’t stop fighting, and she hasn’t. She’s pulled through what a lot of people would not have through sheer toughness and determination.”

During her four weeks in rehab at Riley, Lacey had regular physical, occupational and speech therapy, as well as her favorites – music and art therapy.

Before she was released on Tuesday, she said the thing she’s looking forward to when she gets home is Christmas. The family marked the holiday in the hospital but planned to celebrate again at home, taking advantage of after-Christmas sales to spoil Lacey.

“We got her a whole bunch of Barbies for 70 percent off,” her dad said, adding that everyone’s kindness at Riley has spoiled her just a little. But that’s a good thing. “She deserves it, just like every kid here does.”