It’s all about the babies

Every year on his birthday, a young man comes into the NICU at IU Health Methodist Hospital to deliver a present for a baby born that day. It’s a tradition started by his mom when he was a little boy to remind him of the lifesaving care he received there as an infant.

It’s a memory that Stephanie Emerson will carry with her as she leaves the NICU after 44 years in the department.

Emerson is shift coordinator for the NICU, which is part of Riley Hospital for Children’s neonatal intensive care unit even though it is housed at Methodist. She’s seen a lot and done a lot in her four decades as a nurse, but for her, it was always all about the babies.

“I thought at first I’d be a pediatric nurse, but I came here and fell in love with the whole concept,” she said. “I stayed because I’ve had the opportunity to do a lot of different things, each one really satisfying.”

Among her duties in the NICU over the years was in the education department, a job she loved, but she found herself gravitating back toward the babies.

I found myself lingering more and more over here, not wanting to leave.” 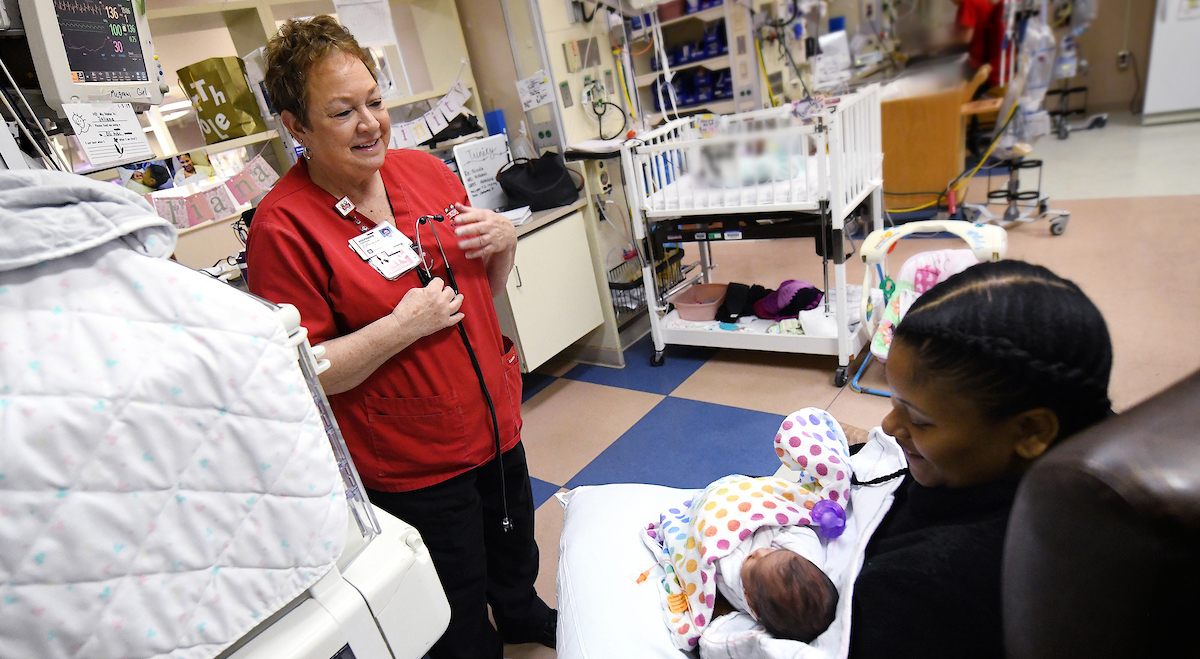 What is she going to miss most when she retires Jan. 25? The babies, of course. And her colleagues.

“I’m going to miss holding the babies, but I’m looking forward to spending more time with my own grandbabies,” she said, even though they’re too big to cuddle now. They’re into sports and school activities, and she wants to be there to see them grow.

Fellow nurses are going to miss her steady presence in the NICU, where as many as 50 babies are cared for at any one time – most housed in an open nursery on the third floor, with eight more in private rooms on the eighth floor. When the new mother-baby unit opens at Riley, all NICU babies will have private rooms, making it easier for parents to stay with their infants and promoting family-centered care.

“We’re seeing people in our unit at an upsetting time,” Emerson said. “They’ve been on this path of joy to having a baby, and now they have to adjust their goals with a preemie. That’s why it’s so important that families can stay, so they’re a part of the team.”

Emerson is the “go-to person” on the unit when an experienced hand is needed, said registered nurse Brooke Cochran, who has worked at Methodist for a year. “She’s awesome at keeping everything organized amid all the chaos.”

Sarah Rhoads said Emerson was a great resource for her when she started her career four years ago at Methodist. “She brings a wealth of knowledge, she is very supportive and patient, and she is a very kind person. I’m going to miss her very much … and you’re going to make me cry.”

When Emerson was in high school, teaching and nursing were the favored careers for most women who went on to college. Emerson remembers how she and her best friend used to grill her friend’s mom – a nurse -- when she came home from working the night shift in the emergency room.

“I’d spend the night over there, and when she came home we’d want her to tell us all the gory stories.”

Both Emerson and her friend went on to study nursing in college. She hasn’t regretted it for a moment.

“I love my job; not everybody can say that. I feel very fortunate.”

In 40-plus years, a lot has changed in the care of pre-term infants. When Emerson started, the youngest gestation-age that a baby could be saved was close to 28 weeks. Now, it’s down to 22 or 23 weeks, thanks to the miracle of technology and new drugs.

Developmental care also has improved, she said. “We learned to pay attention to how we position babies and how light and sound affect them.”

On a walk through the third-floor NICU, Emerson points out how the lights are dimmed, many incubators are covered and babies are tucked in securely to mimic the feeling of the womb.

“We know now that developmental care is equally important,” she said. “These kids were meant to be inside of their moms and protected.”

Alexis McGraw is grateful for the nurses who care for her daughter day and night. Jaliana McGraw was born Jan. 4 at 31 weeks. Her mom comes to the NICU every day to hold her tiny baby, but she must return home each evening to her 2-year-old son, Jaden, who also was a preemie. His twin died at birth.

“She’s not as critical as they were, but it’s scary,” said McGraw, who calls regularly to check on Jaliana when she can’t be at her daughter’s side. “I love the nurses here.”

As Indianapolis dug out from a 7-inch snowfall this past weekend, Emerson recalled the historic Blizzard of 1978, which dumped nearly 20 inches of snow on the city and caused drifts of up to 10 feet. She spent many a night at the hospital during snowstorms to ensure she would be ready to go to work the next day, but not in ’78. She was off having her own baby during that memorable time.

And she won’t have to worry about snow much longer. She intends to escape the winter with her husband and head down to Florida.