Music and art therapy help family heal: “When you’re hurting from the roots of your hair to the souls of your feet, sometimes it’s good to be able to create something beautiful.”

For anyone who has lost a child, the words of this mother will surely resonate:

“We make plans and we’re excited about our futures, and then things happen and we end up in places we didn’t anticipate. It’s totally shocking. We don’t like the scenery at all. But even when our fond dreams are broken or some of them are completely destroyed, as we go on living, step by step God creates a new path and eventually new joy.”

As a member of the Amish community in southern Indiana, faith and family are the foundation of life for Rhoda and Paul, parents of 13 children, including twins born Nov. 25 at IU Health Methodist Hospital.

The couple, who asked that their last name be withheld for the privacy of their children, want to share their story of love and loss, of grief and healing, with the hope that it will help others. (In keeping with their religious beliefs, no photos of the family were taken for this story.)

It began late last fall, when Rhoda, pregnant with twins, was rushed to Methodist after complications set in. Her babies were delivered more than 10 weeks prematurely. The girls – Margaret and Maria – clung to life. Margaret weighed 2 pounds, 11 ounces; Maria weighed 2 pounds, 6 ounces. Each had medical challenges.

“Every child was an increased joy”

Over nearly 24 years, Rhoda had delivered 11 children with no problems – some in the hospital, some at home. To deliver prematurely and to have two tiny lives hanging in the balance was something she had never experienced.

“That was partly what was so devastating to our family,” she said. “It was not something we were used to at all. All of my pregnancies and births were the more romantic type – a lot of joy involved in spite of some morning sickness and going through the birth – but there was still this joy of a new child in the family. They came healthy and ready to live. Every child was an increased joy.” 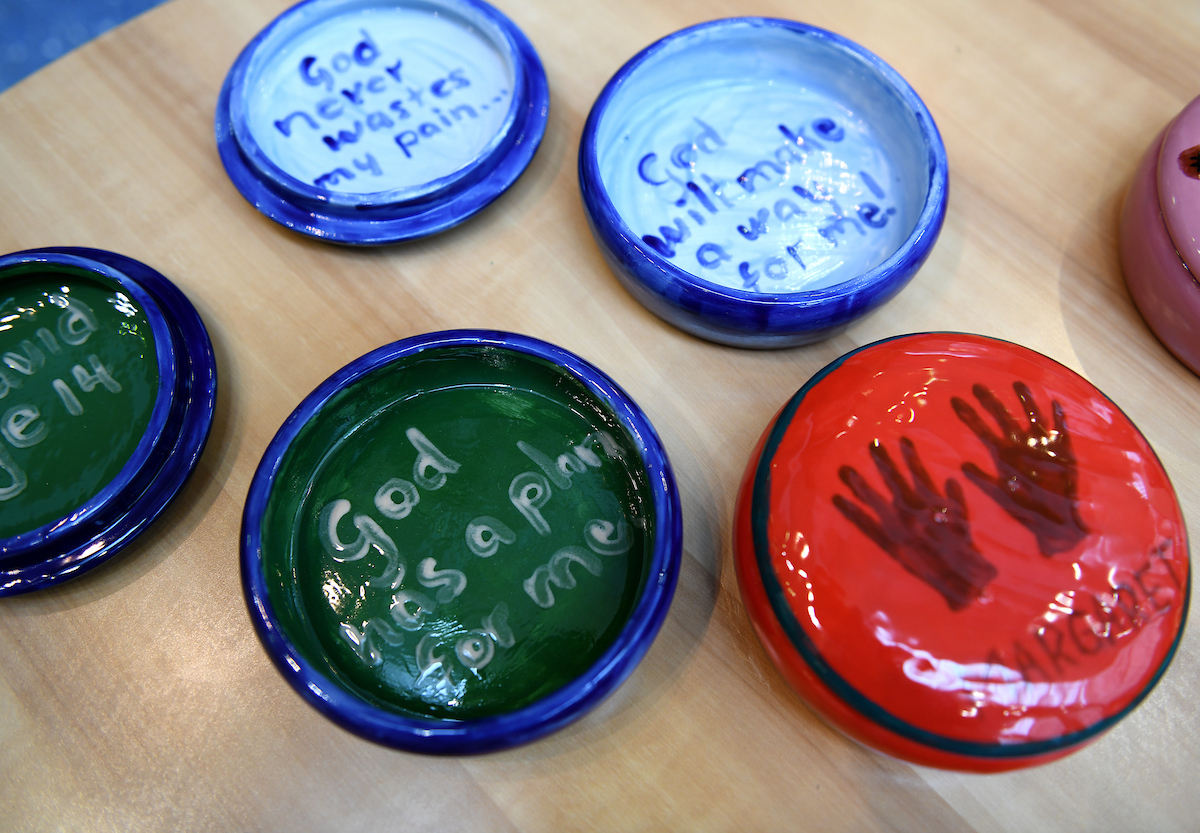 The twins brought joy, too, she said, “but there was so much grief at first that you could not feel it.”

That’s because their health was so precarious. The babies were transferred to Riley Hospital for Children at IU Health, where Maria responded to treatment, but Margaret suffered an infection and her little body began to shut down.

The decision was made to keep Margaret on life support until both parents, an aunt and uncle and the 11 children at home could gather at Riley to say goodbye, just six days after her birth.

“The day we had to decide whether to remove her tubes, it was heartrending,” Rhoda said. “Before she passed, we all took turns holding her.”

Rhoda takes comfort in that moment, saying her little girl would open her eyes periodically and look up. “It seemed like she was telling us it’s OK.”

“This is something I would like to share with other parents who have to release a child,” she said. “A baby will always go where there’s warmth, where there’s light, where there is God. Maybe six times over she would open her eyes and look heavenward and with her tiny arm she’d reach toward heaven and almost wave as if she was beckoning. She wanted to go.”

Everyone had a turn to hold her, from the 23-year-old eldest sibling to his 2-year-old sister. “Then we removed the support and loved her until she passed.”

The journey ahead would be difficult

“It’s a different path of grief than I ever thought I’d have to face,” Rhoda said. “You have a funeral for one baby and then you come back to the hospital and take care of one that looks exactly like her.”

Maria faced months of specialized care in the NICU; the family was separated due to travel difficulties and flu restrictions in the hospital. But the art and music therapy team at Riley provided support that would prove critical to the family’s healing, Rhoda said.

Whether it was creating artwork, pottery or music, or simply talking, the fact that someone else sat with them in their time of sorrow made a difference, she said. For the children, gathering around the table at home and painting small pottery bowls provided by Riley art therapist Cassie Dobbs was therapeutic. 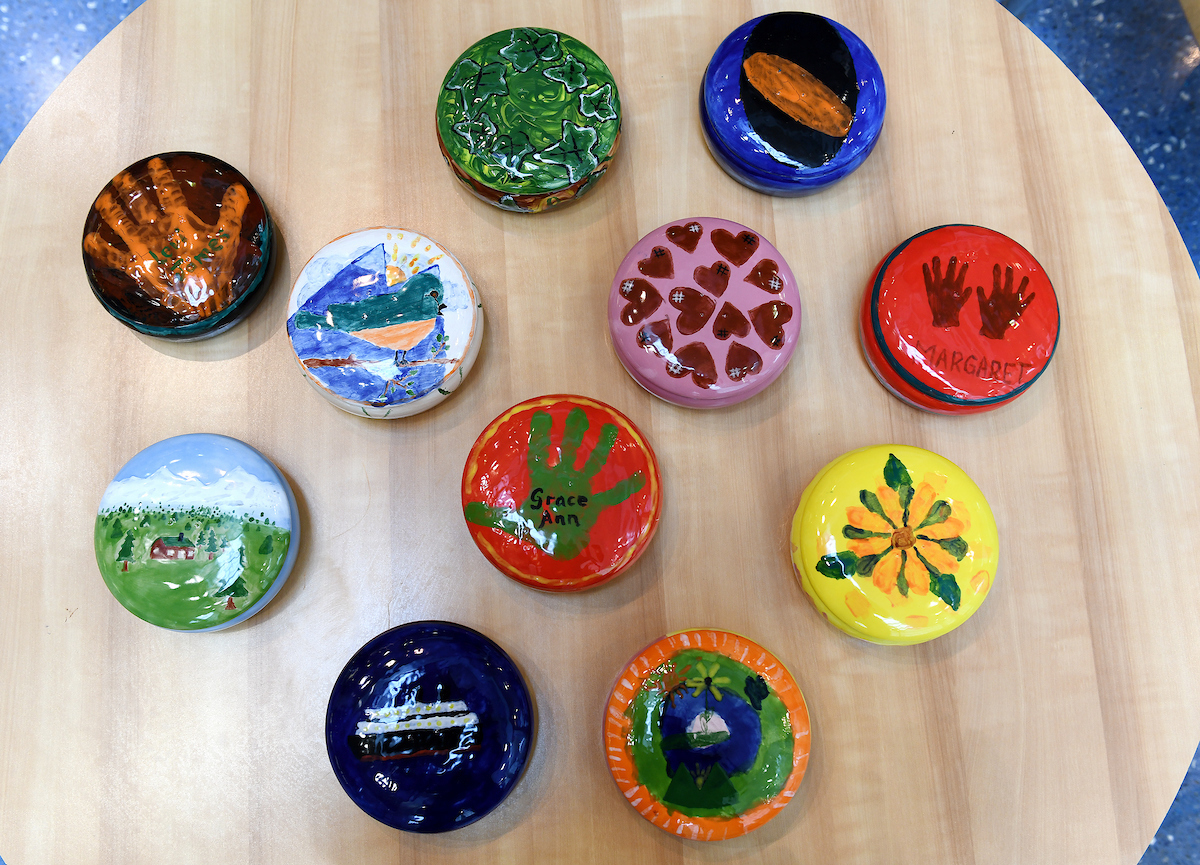 “They could do something special together and immerse themselves in it,” Rhoda said. “The older siblings helped the younger ones. It meant a lot because it was a positive thing to do in the face of tremendous grief.”

The result was 11 little bowls with lids, all to be placed by the children’s beds or on their desks – to hold coins, hairpins and stamps, Rhoda said, and to follow them through life and serve as a memory from Riley, to remember that someone cared.

“I think that was the most of it, to know that someone cared. That means so much.”

For herself and her husband, Rhoda painted a vase that she envisions holding flowers by Maria’s bedside or at a family wedding or other celebration.

“I had the longing to have something that in future family gatherings I could put on the table – a memory of our little girls, of them being twins, of this time. Cassie helped me with the vase and she got me started on colors. I told her I wanted the vase to be the color of morning sunshine through the fog.”

Rhoda worked on it off and on at the hospital as Maria continued to grow, while at the same time the memory of Margaret’s loss cut through to her soul.

“When you’re hurting from the roots of your hair to the souls of your feet, sometimes it’s good to be able to create something beautiful.”

The vase now has a place in the china cabinet right beside the dining table in the family’s home.

Dobbs said that she and other art therapists, who are licensed mental health counselors, try to suggest things that might work for bereaved families, but Rhoda had a lot of ideas for what she wanted to make.

The first thing they did was to create a digital painting, with Dobbs at the computer while Rhoda sat beside her and described her idea.

“She had this vision of an image she wanted to hang in her house of these two little girls – one with wings and whispering to another little girl who looks just like her – in a field with flowers,” Dobbs explained. “I was like her hands and translated her vision through the computer since she doesn’t have experience with that technology.” 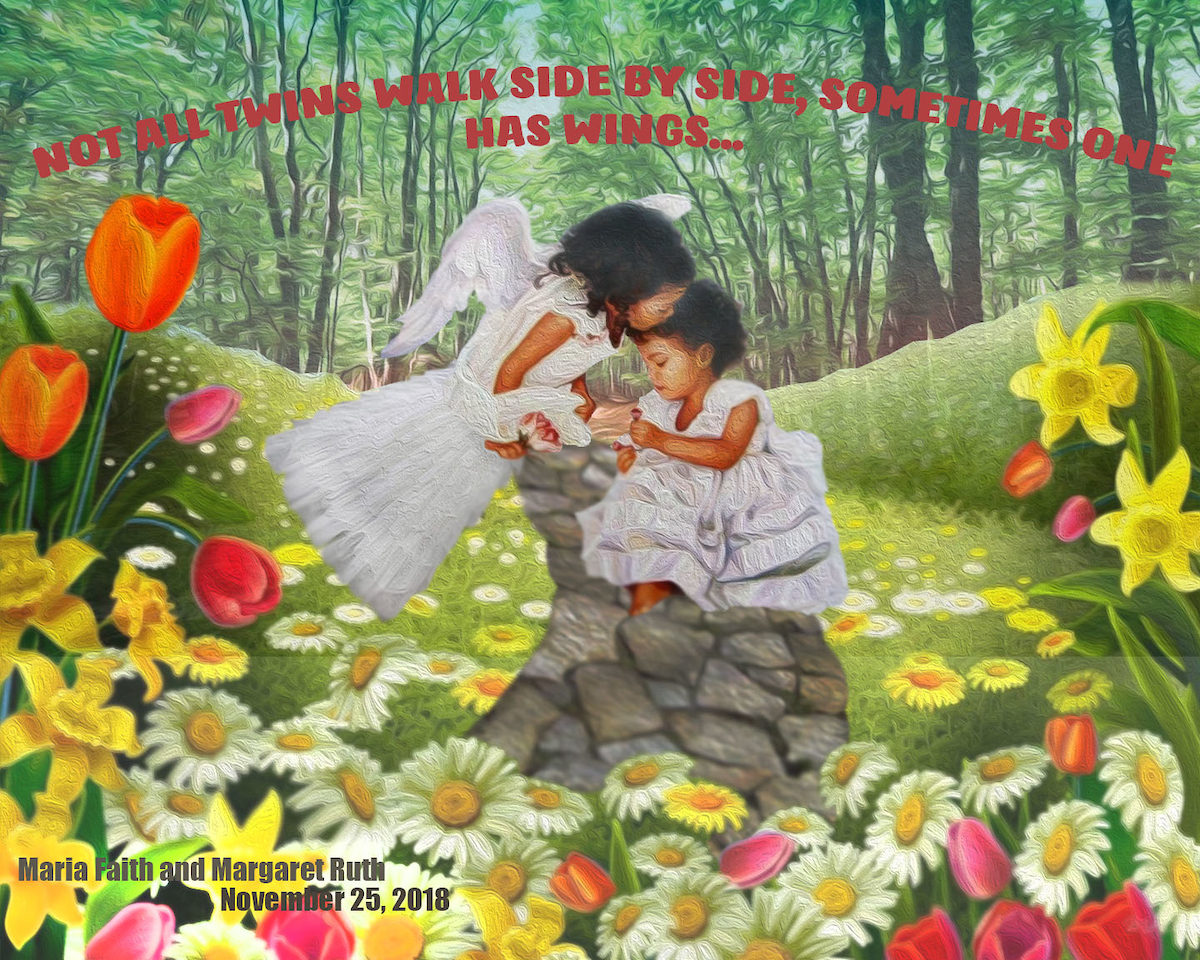 It took several sessions to get it just right, but the finished product includes an image of two little girls with a quote at the top: “Not all twins walk side by side, sometimes one has wings.” The names Maria and Margaret are included at the bottom.

Dobbs created several copies of the digital painting – some to give to the family and one to hang in an art show to be unveiled in the Simon Family Tower on April 1.

When Riley music therapist Lauren Servos met Rhoda, she learned that the family often sang together. Because of their aversion to technology, however, they don’t have any recorded music. They’re not watching YouTube or listening to Disney tunes.

Rhoda, who does not read music, was hoping to learn new songs to share with her family, so Servos helped her find songs, then created sheet music so the older children who do read music could teach them to the others.

But Servos was on the receiving end as well. Rhoda taught her a family favorite – “Happy Happy Home” – guaranteed to put a smile on any child’s face, Rhoda said.

Servos said Rhoda impressed her despite the difficult circumstances.

“She always knew and could say very clearly what she wanted. She never seemed to be floundering or unsure of herself during the experience. It was so amazing, I think she became a role model for the other mothers on the unit.”

After 75 days in the NICU, Maria came home to the welcoming arms of her family and larger community. The date was Feb. 8 – her due date had Rhoda carried her and her sister to term.

It was an emotional reunion, Rhoda said, with the baby’s siblings all gathered around trying to get a good look at their sister. While all were delighted, many also were almost scared, Rhoda said. 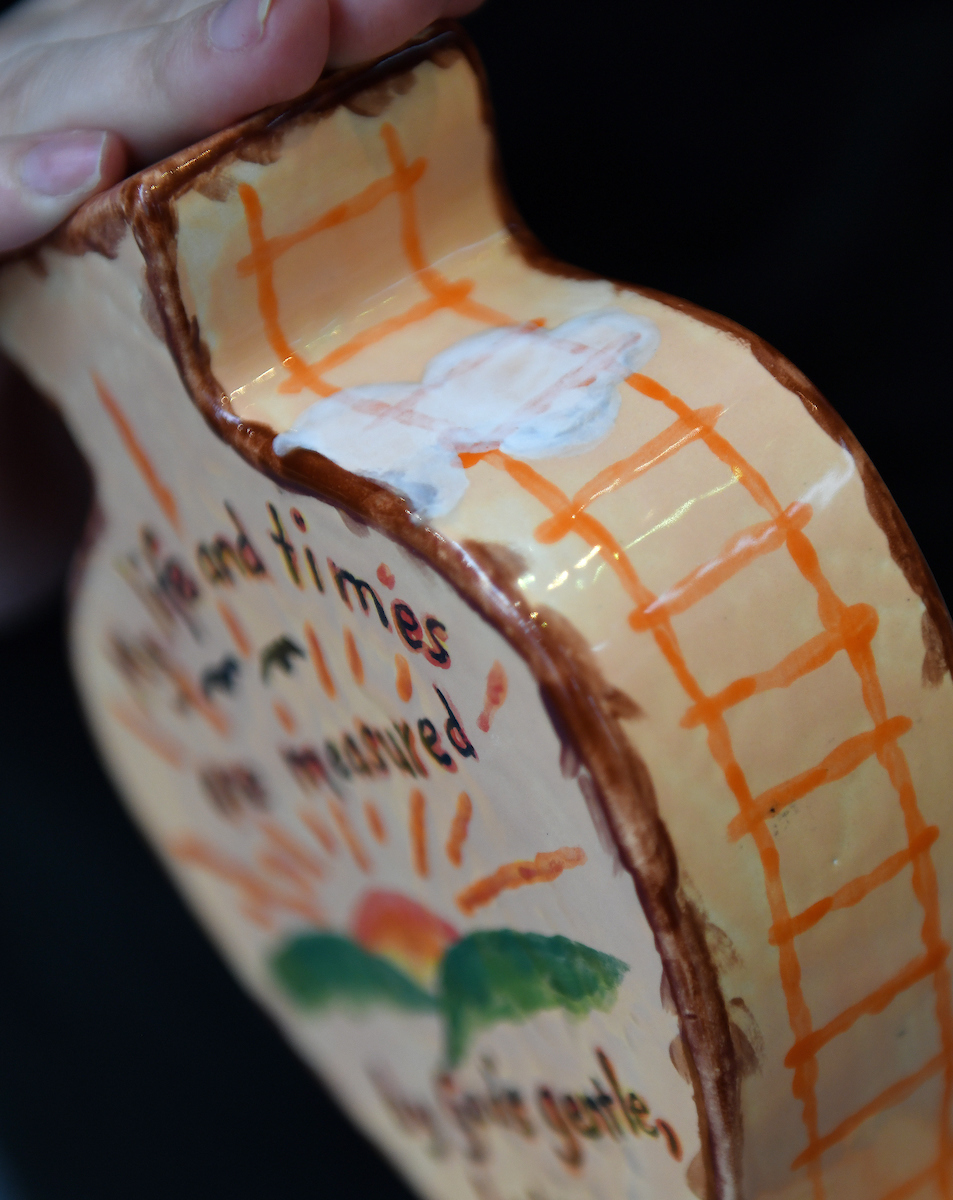 “Everybody took a turn to look at her, some were too scared to hold her right off, but of course she was the focus of attention all around. It was the most fun for the littlest of the children. It was beautiful to see them.”

Especially the 2-year-old, she said. Seeing the baby “sort of brought her life back.” Wrapping her arms around the baby “healed a lot of things for her.”

Maria, who weighs just over 9 pounds now, is like a newborn, her mom said. But she’s doing well. She still has a feeding tube, but she’s learning to nurse.

“It helped me tremendously that I had breast-fed 11 others,” Rhoda said. “I’m amazed at every mom that is able to hang in there and not have the experience nursing and keep pumping milk until that baby is able to breast-feed. There’s no comparison to a baby being born at term and latching on and nursing and one that is so premature.”

The family has always been close, Rhoda said, but with this experience, “you’re more alert to the joys.”

While the grief will always be there, she said, the family talks about Margaret “naturally and easily” because she’ll always be a part of the family.

“We don’t look at it as Margaret not being here. We know she’s in heaven, but we love her. It’s not like she was and now she isn’t. When someone asks me how many children I have, I say 13 and I don’t even explain.”