At 16, she suffered cardiac arrest during a swim meet. Five years later, she returned to Riley to thank those who cared for her.

Mikaela Haller doesn’t remember much about her stay at Riley Hospital for Children five years ago.

Now 22, Mikaela was a high school junior when she was LifeLined to Riley from Muncie after collapsing during a swim meet.

Her sister remembers it all. Victoria Haller, then a senior, was swimming in the same relay, two lanes over, when she had a “weird sister instinct” that Mikaela was in trouble, she said.

It was Victoria’s senior night. A night for celebrating. But when Victoria looked over to lane 1, she saw her sister at the edge of the pool trying to drag herself out.

Mikaela had been diagnosed with epilepsy in third grade, so Victoria suspected she was having a seizure, which typically lasted a couple of minutes. But when she didn’t regain consciousness and an ambulance was called, Victoria was terrified.

“This is my baby sister, this can’t be right,” she remembers thinking at the time.

Mikaela, who suffered cardiac arrest that January night in 2014, remembers nothing of the ordeal. Her prognosis when she arrived at Riley was grim, her parents were told. Her sister stayed by her side, sleeping in the rocking chair next to her bed, singing to her and praying for her.

She returned to Riley last week with her parents, Karen and Ken, her brother Zachary and her sister to reunite with some of her care team and to fill in some of the holes in her memory. 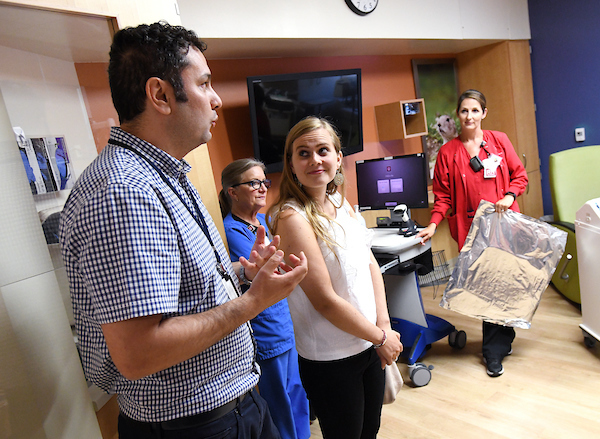 Joining the family was Dr. Riad Lutfi, pediatric critical care service line director, who was the attending physician during part of Mikaela’s two-week stay. He explained to her how she was placed on a cooling device called the Arctic Sun for three days to minimize the possibility of brain damage that she might have suffered due to lack of oxygen.

There was an established protocol for the cooling treatment in adults at IU Health Methodist Hospital, but data for pediatric patients was not yet available at the time.

“We knew that the best thing we could do was cool you down, probably to 32-34 degrees©,” Dr. Lutfi told Mikaela as she looked at a machine similar to the one used on her. “But we didn’t want you to feel that cold, so we gave you a lot of medication to put you to sleep.”

It was a difficult three days on the cooling device, followed by three more days before Mikaela would recover from the medication-induced delirium.

“I remember like yesterday looking at your mom, and I know she’s worried and I’m worried because I want you back at baseline,” he said.

Karen Haller remembers the anxiety of that first week.

“When they brought her back off the cooling machine, it was stressful. We weren’t sure if she’d remember us.”

But one word was all she had to hear to know that things would be OK. Mikaela opened her eyes, looked at her mom and said, “Mommy.”

A nurse encouraged the family to play music that Mikaela likes, and at the time she was a fan of “High School Musical.” So her sister pulled the music up on her phone and put the phone by Mikaela’s ear. Soon, the teen started singing the words.

For three nights, nurse Angie Finley took care of Mikaela in the pediatric intensive care unit. Now a nurse practitioner, she reunited with her former patient in what’s now the CVICU at Riley. The two shared a hug in the hallway.

Mikaela couldn’t hold back the tears, however. “Thanks for taking care of me,” she said.

Also on hand was cardiac technician Susan Gude, who was part of Mikaela’s care team then and continues to see her now during check-ups.

“Susan is wonderful – she’s part of our family,” Mikaela said. “She was there through it all – emotionally, spiritually, physically.”

Dr. Mark Turrentine, the cardiothoracic surgeon who implanted a defibrillator to help control Mikaela’s abnormal heart rhythm, even stopped by to see her and her family as they shared memories.

It’s hard for Mikaela to process that the entire episode happened, that she’s here and alive today, she said. 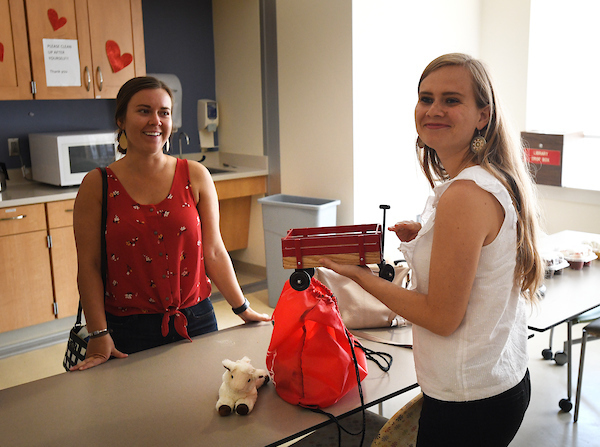 “I’m grateful that God put people here to save my life.”

As a measure of appreciation, the recent graduate of Indiana Wesleyan University worked with the Riley Children’s Foundation to raise money for the dedication of a new Riley wagon.

“This hospital gave me my life back, so donating a wagon is just the smallest thing.”

Mikaela, who earned a degree in sports management, plans to move to Virginia to live with her sister while Victoria goes to grad school.

Karen Haller said Mikaela once talked about looking for a job at Riley someday. “I could see her coming back here.”