“I thought I was going to die”

An explosion and fire left her with burns over 85% of her body. The team at Riley brought this teenager back from near death, and now she’s ready to take on the world again.

The accident happened in a flash. A cozy fire in the backyard of her father’s home on a frosty winter night erupted into an explosion that quickly engulfed 17-year-old Elena Marcum. 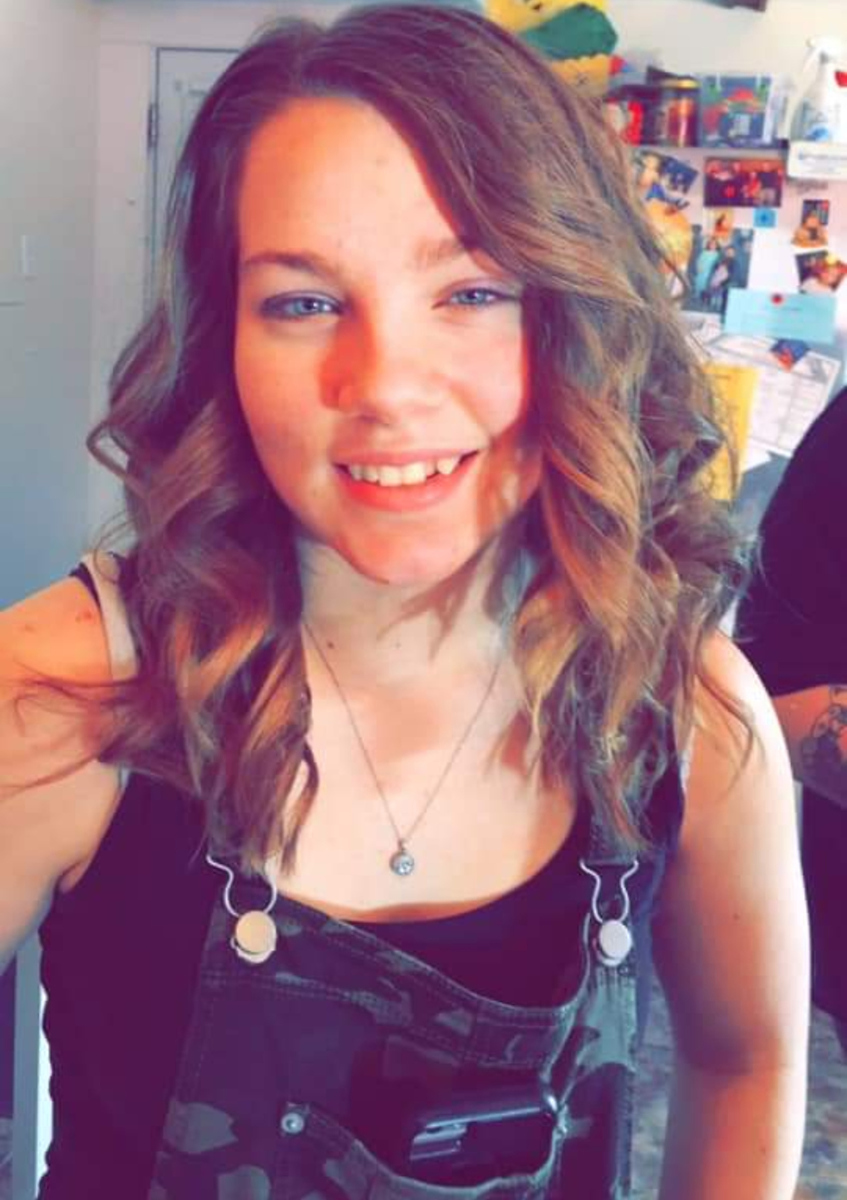 Rob Marcum heard the blast and ran out back in time to see his beautiful daughter careening toward him with flames licking out from all over her body. He had no time to think.

“I threw her to the ground and rolled her,” he recalled, frantic to smother the flames. He pulled her burning clothes away from her body, sustaining second- and third-degree burns on his hands. For Elena, the injuries were catastrophic – third-degree burns over 85 percent of her body. Only her feet, scalp and backside were spared.

The rest is a blur. The 911 call, the emergency vehicles, the LifeLine flight to Riley Hospital for Children at IU Health.

The date was Feb. 21, 2020. A Friday night. It was supposed to be just a little campfire, a nice way to relax with her boyfriend at the end of the school week. The decision to pour gasoline on that fire is one Elena will deal with for the rest of her life.

Yet she is alive. And despite her tortuous recovery, wallowing is not her way.

She is moving forward.

One-hundred-and-thirty days have passed since that night, all of them spent at Riley.

Eighty-two days in the burn unit and another 48 days in the in-patient rehab unit. On her 49th day in rehab – Wednesday, July 1 – Elena is set to be discharged. It’s a month earlier than her doctors predicted, but this girl is motivated to leave this chapter of her life behind. 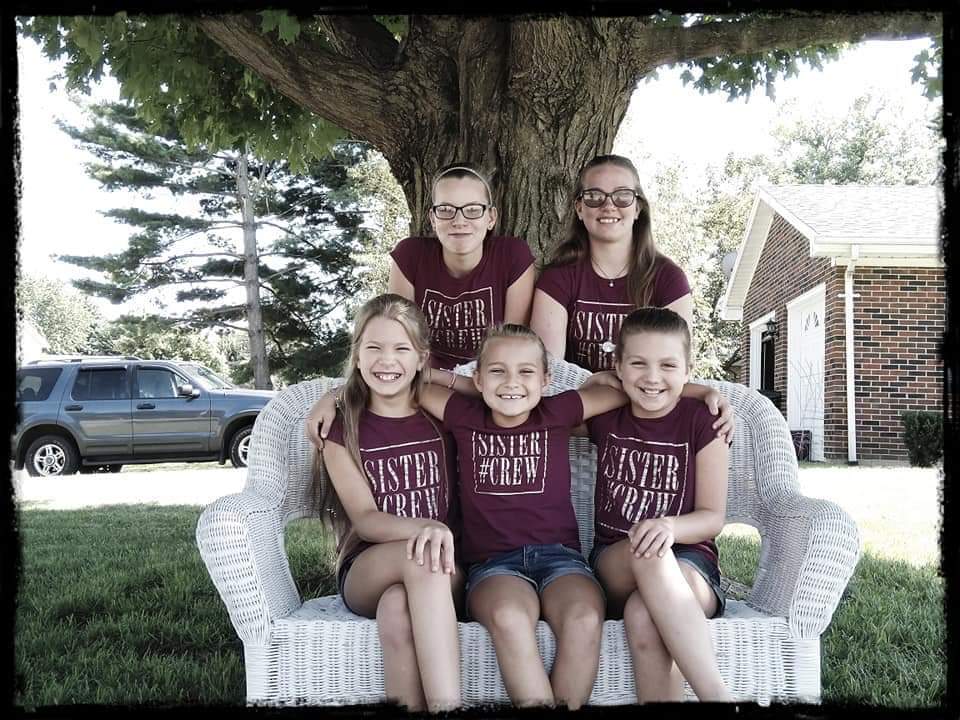 It’s a day she has dreamed about since she became alert enough in the hospital to understand her situation. She just wants to go home to Connersville. She wants to see her sisters again.

“When it happened, I thought I was going to die,” the high school junior says matter-of-factly. Even after the flames had long been extinguished, “I felt like I was still on fire.”

A burn is one of the most painful injuries a person can endure, and treatment is often more painful than the initial trauma. Full-thickness burns like Elena suffered go through the outer layers of skin and deep into connective tissue.

Treatment can include skin grafting, the use of synthetic or spray-on skin, copious amounts of IV fluids and antibiotics to prevent infection.

Elena had it all.

When Dr. Brett Hartman, medical director of Riley’s burn unit, got the call on that February night that a 17-year-old female was being airlifted to Riley with grievous injuries, he and his team jumped into action.

“As soon as she hits the door, we along with our trauma colleagues take care of her and make sure there are no other injuries,” he said, noting patients might have been thrown or hit by projectiles in an explosion.

Once they determined Elena’s injuries were strictly burn-related, the burn team took over her care. From the beginning, the teen’s will to live was apparent.

When someone with injuries as serious as Elena’s comes into the hospital, the priority, of course, is to save their life, Dr. Hartman said. The first 36 to 48 hours are critical.

That first night, they made incisions in her arms and legs to relieve pressure and give her limbs room to breathe, preventing what’s called compartment syndrome, a complication that can lead to necrosis, or death, of the extremities.

At about day 3, they started the process of removing dead skin. About a week into her treatment, Dr. Hartman had a good feeling that his patient would survive. It’s never a given, of course. There’s always the risk of infection and pneumonia, which can be fatal. But Elena has continued her remarkable recovery. 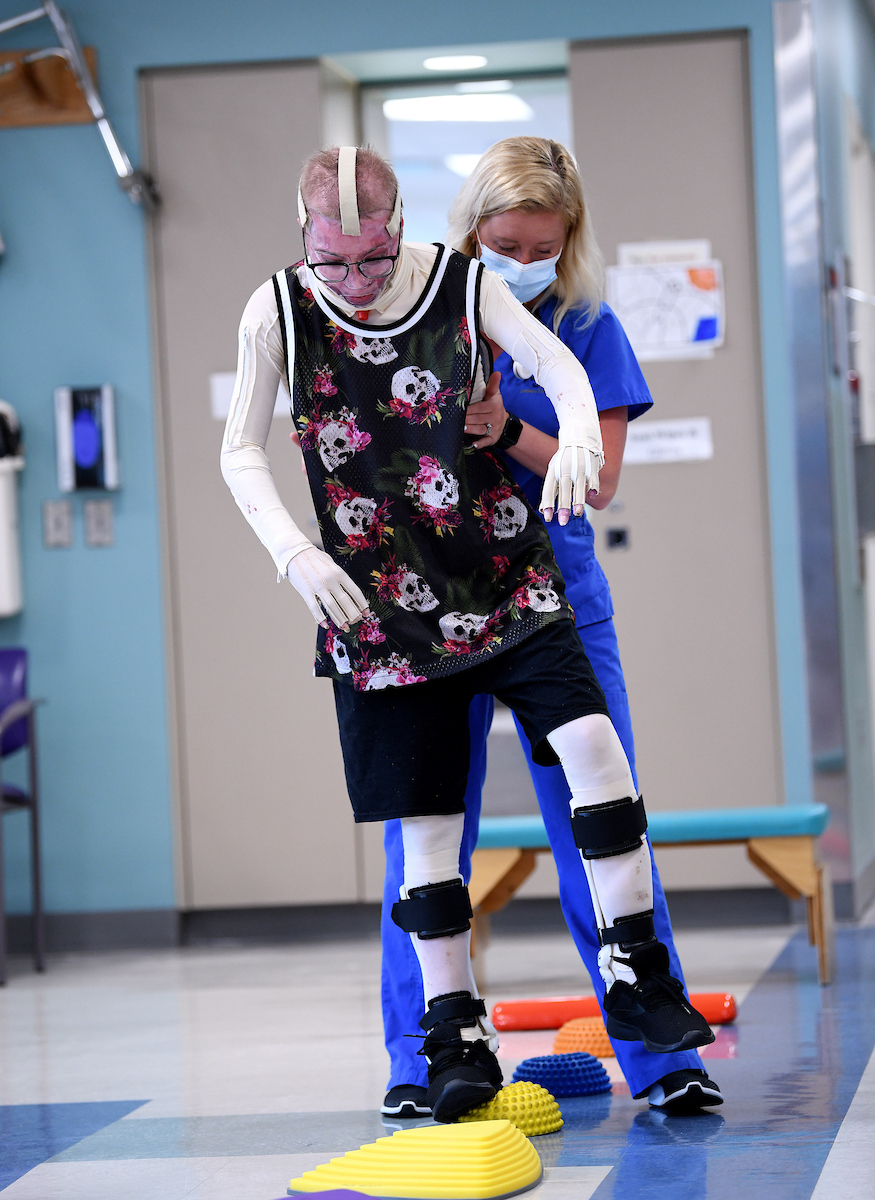 “She’s a very strong person. She tolerated the treatment well, which says a lot about her mindset,” he said. “The mind is a powerful thing.”

And Elena’s mind was made up. With her family’s love and support, she was going to make it.

“Her parents never wavered in their belief that she would survive, and they wanted her to continue with the process no matter what it took,” said physician assistant Madeline Zieger.

That kind of conviction is key. Both Elena’s dad and her mother, Amanda Crawford, know that their daughter is a fighter. Elena’s parents are divorced, but they came together, supported by their new spouses, to see to it that their girl was never alone on her long road to healing.

The journey has been grueling.

“I was terrified that I was going to lose my little girl for the first month because it was surgery after surgery,” Crawford said.

Seeing her in pain was difficult for the entire family. But each day revealed a little more of the spirit and fire that lies within Elena.

“When she feels bad, we just tell her if anyone can get through this, it's her,” Crawford said.

She couldn’t even stand up, much less walk, after two months in bed, her father recalled. She couldn’t use her hands, couldn’t talk. But with the help of her care team, including doctors, nurses and therapists (respiratory, occupational, physical and speech), she climbed back.

“She knows that nothing’s going to be the same, but she’s in great spirits,” her dad said. “She knows that we’ve got to move forward and work with what we have.” 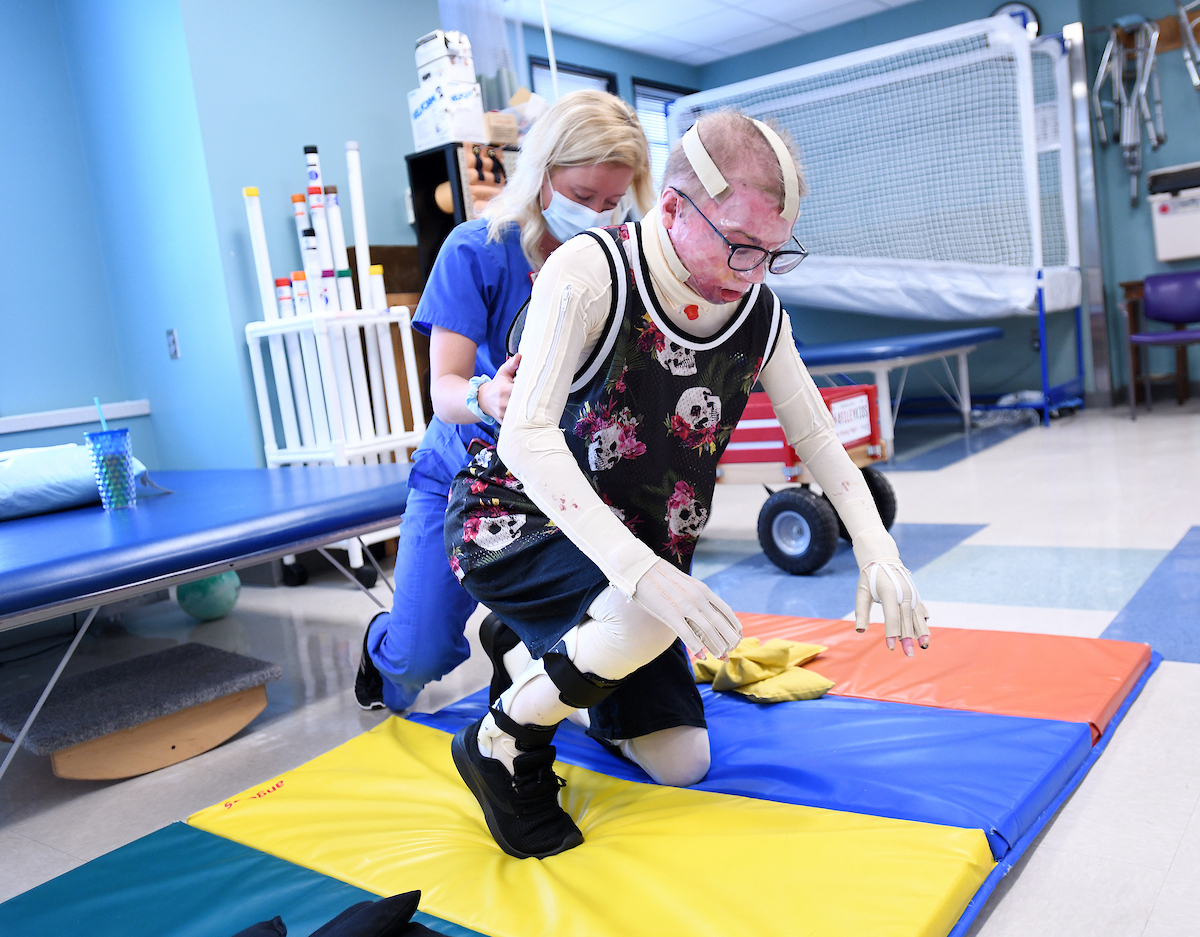 So she has spent hours every day in therapy while in the rehab unit – stretching, cycling, rebuilding muscle mass and improving her endurance.

On the day we visited her, she was working with physical therapist Emily Williams, as Rob Marcum pitched in to help (literally). Marcum tossed a plastic ball to Elena, who practiced hitting it with a plastic bat, then reaching down to pick it up.

Movements that once were so simple for the former fast-pitch softball player now take supreme effort.

“We can throw whatever at her, and she just pushes through,” Williams said. “She doesn’t let anything hold her back.”

That includes Williams, who decides the weights she has put in the back of Elena’s rehab bike aren’t heavy enough, so she pulls up a rolling stool and hangs onto to the back of the bike while Elena pedals and pulls her around the unit.

Williams has been working with Elena since before she moved over to in-patient rehab. She has seen monumental progress in that time.

Early on, Elena was heavily sedated and was not able to follow commands, Williams said.

“We were at a point where she needed support out of bed, from sitting to standing, walking, and now she’s really doing all these things on her own. To see her like this, it’s incredible.”

As if on cue, Elena’s playlist on her phone launches into “Rise Up,” sung by Andra Day.

It’s been a learning experience for Williams, too. The young therapist moved over from the adult world at IU Health Methodist Hospital in October, and Elena is her first pediatric burn patient.

“Honestly, to be able to learn from her and learn from the team has been an awesome experience. The attitude she has makes it easier for me and definitely rewarding.”

The two have an easy-going relationship. They’ve bonded over music, sports and dancing. But that doesn’t mean there aren’t flashpoints occasionally. Elena is strong-willed and not afraid to speak her mind. Williams cajoles but always finds a way to get her patient to do the work.

“She is honestly amazing,” Elena says of Williams. “She pushes me. She believes in me. She doesn’t say ‘you can’t do this.’ ”

Because there’s not much Elena can’t do once she puts her mind to it, her care team and parents say.

“You tell her to take one step, and she’d take four,” Vanamalas said. “She’s a fighter. She’s willing to push herself to get where she needs to be.”

Rowls remembers that Elena was motivated by the promise of eating real food.

“She wanted a cheeseburger and some Olive Garden. She didn’t want the tube feedings.”

After 15 surgeries and breathing with the aid of a ventilator for several weeks, Elena has been treated to some of her favorite foods. Her dad brought her a cheeseburger from a nearby restaurant before her PT session. And she is looking forward to a heaping plate of chicken alfredo when she goes home this week.

FAMILY BY HER SIDE

Elena arrived at Riley during flu restrictions. Those restrictions quickly escalated with the COVID-19 virus by mid-March. Through it all, only one parent was allowed to visit at a time.

“I have to say that her family unit has been incredible through all of it,” said Belinda Frazee, clinical manager on the burn unit. “Someone was always there with Elena. They were incredible advocates for her.”

“For me, it was watching not just the clinical expertise but seeing everybody come together as a team, and that includes her family. That was a huge contributor to her success,” she said.

“She is an amazing young woman, but without all of them, she wouldn’t have gotten to where she is.”

“Not only were Madeline and Brett incredible in coming up with a treatment plan, but the team behind them helped them achieve it, and all along the way, they were so compassionate and caring. It was truly incredible to see.”

Dr. Hartman echoes what Frazee says about the team.

“We can’t do this without them,” he said of the bedside nurses and therapists. “To have the outcome we did as quickly as we did speaks volumes about this place and our team. I couldn’t be more proud. We work very well together, and the outcomes we have here show that.”

As for his patient, Dr. Hartman is optimistic.

“She should do great. This is a life-changing event, but her mentality is great and she has good support to get through this.”