‘I Never Imagined Being A Cancer Mom’

Her little guy will celebrate his 1st birthday in the hospital, but she, her husband and family are grateful for the care he has received.

“For I am not ashamed of the Gospel, because it is the power of God that brings salvation to everyone who believes.”

For Selina and Christian Culbertson, faith and family are what is getting them through the long days and nights at Riley Hospital for Children while their son, Aiden, fights acute myeloid leukemia.

Aiden will celebrate his first birthday in the hospital this week, the same place he celebrated his first Thanksgiving, with his family at his side. Diagnosed in August, he has spent much of the past four months at Riley undergoing three rounds of chemo.

Through it all, he has smiled.

“Our kids are downright amazing,” Selina says, holding Aiden while watching older daughter Makenna take charge in the play room across the hall from Aiden’s room at Riley.

Makenna is 2 going on 12, her mom says. The hospital has become such a big part of the little girl’s life, she likes to pretend she is a doctor and checks her little brother for signs of sickness.

She puts on her little gloves and says to Aiden, “OK, what’s the deal,” while he looks on in quiet amusement.

“I believe we have a future nurse or doctor on our hands,” her mom says. “She’s already joining rounds in the morning,” her dad adds.

Still, being at the hospital 24-7 is hard for any family, especially when your home is three hours away. The Culbertsons live in Evansville, where Christian is a cable salesman and Selina is a stay-at-home mom. 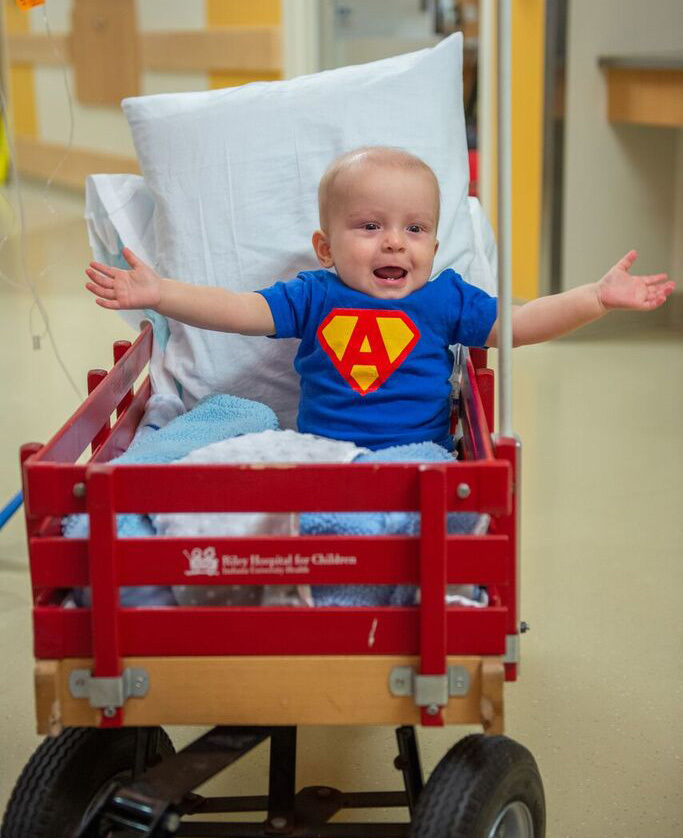 Christian generally goes home during the week to work and returns to Riley on the weekends.

“I get to go home more, but the struggle for me is leaving them here,” he says of his wife and two kids.

For Selina, it’s the opposite. “My struggle is being here and not being home and everything being out of my control.”

She always wanted to be a soccer mom or a baseball mom, she said. “I never imagined being a cancer mom.”

But meeting other parents at Riley has opened her eyes, and it has allowed the young parents to share their faith.

“God has been with us in all of this,” Selina said. “We’re not going to sit in a corner and cry; we did that the first week.”

“If Aiden’s not crying about it, we don’t need to be,” her husband agreed. “As the parents, we have to keep going.”

And so they will. Next up is a bone marrow transplant for Aiden. His dad will be his donor.

Christmas might have to come a little early in Evansville for the family to spend it at home, doctors told the parents, because they don’t want to delay treatment. Once Aiden receives his dad’s bone marrow, it will be another three months before he can go home. That will be followed by weekly, then monthly, check-ups.

The entire process before his immune system will be fully recovered will be about a year, Selina said.

But through it all, he’s been a champ, both mom and dad say. Chemo made him a little sick, but he generally slept it off. 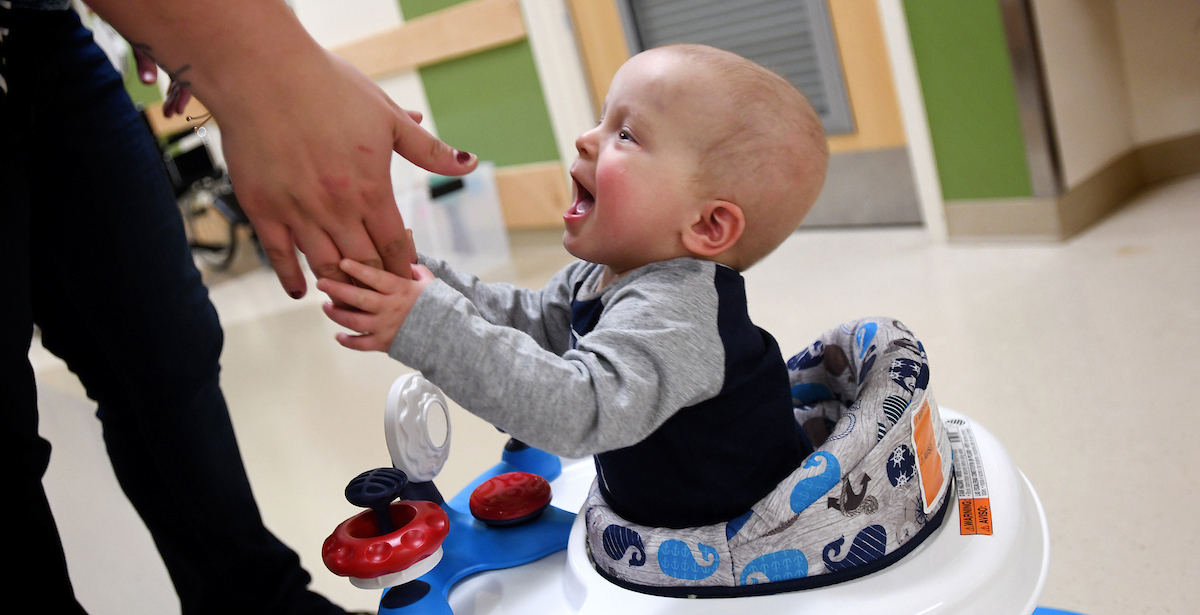 “If he wasn’t handling everything so well, it would be much harder,” Christian said of his son. “Seeing his strength makes it easier. It makes you think about all the things you’ve complained about in life. You don’t really have it that bad outside. You could be here,” he said.

“Seeing all the kids in here handle it the way they do gives you a different kind of strength. It’s absolutely unbelievable.”

Aiden’s first birthday is Dec. 5. He doesn’t know it yet, but he’s going to get a Mickey Mouse cake on his big day. It will go perfectly with the Mickey Mouse toys and trains his parents plan to give him.

This little birthday party is sure to be a big hit on the fifth floor at Riley, where staff have fallen in love with this happy boy.

Count physical therapist Lindsay Schaefer among them. She poked her head in the door one morning to say hi, and the Culbertsons told her that Aiden crawled the day before.

“He’s the best part of my day even when I’m not seeing him,” Schaefer told them. “He is so happy to do anything, and he’s always smiling, no matter what.”

His progress and attitude encourages other patients, Schaefer said. He’s always ready to do therapy and usually doesn’t want to quit.

That’s because he doesn’t want her to leave, said Aiden’s mom.

“He gave some serious snuggles the other day when she stopped by to say hi and would not let her leave,” Selina said.

As she prepares for another week in the hospital with her son, Selina draws on strength she didn’t know she had.

“God has a purpose for us here. So if this is where we have to be, we will make the best of it.”