‘I heard someone scream and realized it was me’

Their 7-year-old “perfectly healthy” son went from a little cough to respiratory failure in a matter of hours. The emergency ECMO team at Riley saved him. “I thank God every day that they made that call. He would have died had he not been there.”

The February day started out so ordinary for Owen Johns. The 7-year-old Columbus, Ind., boy went to the movies with members of his Cub Scout den. By the time he got home, he was coughing. He soon developed a fever and vomited.

As was the habit in the Johns household, his parents set up a sick bed on the couch in the living room so they could keep an eye on their middle son. Christa and Zach Johns, both nurses in Columbus, figured it was a bug that would resolve itself quickly. After all, Owen was a perfectly healthy kid.

But when Christa noticed how restless he was while trying to go to sleep, alarm bells went off.

“He was acting like he wanted to go to sleep but he couldn’t and he was moving around. That is exactly what my patients do when their oxygen is too low.”

The rational mom part of her brain reminded her that he was a healthy 7-year-old boy, but the nurse in her told her exactly what she needed to do – head to the emergency room.

“He was not gasping for breath, he was just very restless. I can see where most parents would not think anything of it. I’m very thankful that we had the knowledge we did,” Christa said.

When they arrived at Columbus Regional Health, where both parents work, Owen still looked pretty good and didn’t act sick. But tests revealed his oxygen level was in the 70s. Normal pulse oximeter readings range from 95 to 100%. Values under 90 percent are considered low.

The ER physician told them Owen had the flu, but the low oxygen levels were not responding to breathing treatments. They made the call to have the boy LifeLined to Indianapolis, but before the flight team arrived, Owen vomited again and went into respiratory failure, Christa said.

“He just fell over in the bed. I heard someone scream and realized it was me.”

Christa still gets emotional when she allows herself to go back to that moment in her mind.

The ER staff intubated Owen quickly and stabilized his oxygen levels in the 70s. They knew he was very sick based on his low oxygen and X-rays that showed the development of plastic bronchitis, a condition that causes severe respiratory distress.

Everything was happening so fast. Their healthy little boy was suddenly fighting for his life and was going to be flown in a helicopter to another city. Neither Christa nor Zach could fly with him. The idea was terrifying.

While Zach stayed behind with Owen as they waited for the LifeLine team, Christa got in a car with her mother-in-law and headed north so they could be at the hospital when Owen arrived.

“I couldn’t bear the thought of him being so sick and not having a mom or dad up there,” she said. 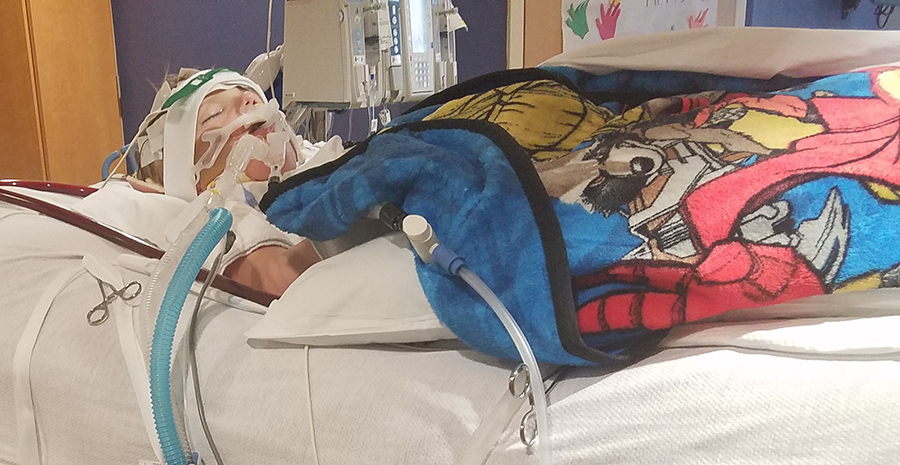 They were told Owen would be flown to IU Health North Hospital, but on their way, Zach called and alerted them to change their course – Owen was going to Riley Hospital for Children at IU Health.

“I thank God every day that they made that call,” she said. “He would have died had he not been there.”

That’s because Riley is the only pediatric hospital in the state with an emergency ECMO program. Extracorporeal membrane oxygenation, or ECMO, is a system that removes blood from a patient’s body, oxygenates it and returns it to the patient, allowing a person’s overworked heart and lungs to rest for days or even weeks. While sometimes used before and after cardiac surgery, it’s typically not available in hospital emergency departments.

By the time Owen arrived at Riley, one of his lungs had already collapsed, and the other was barely functioning. He was diagnosed with tension pneumothorax, a progressive build-up of air in the lungs. 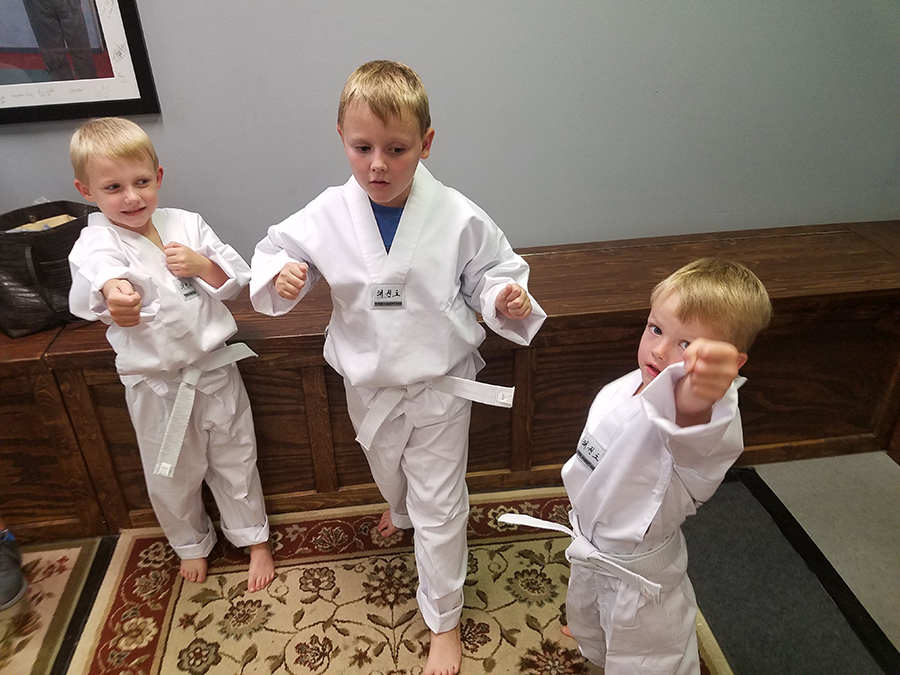 Christa and Zach still couldn’t wrap their minds around the situation. Their sweet boy, who loves to swim, jump on the trampoline and play with his brothers, Hayden and Cooper, was fine a day earlier. He had no history of asthma, no underlying health conditions.

“He was just like a one in a million case,” Christa said.

But he was right where he needed to be.

The resident physician on duty that night earlier this year updated the family continuously. They anticipated everything that happened, Christa said.

“It felt like every worst-case scenario was happening, but they were prepared the whole time. The staff was amazing. They took really good care of Owen, and they took good care of Zach and me.”

Owen stayed on ECMO for six days. During that time, his parents were encouraged to be a part of daily rounds so they could hear everything that was going on medically with their son.

“They were picking the best brains to get the best care for our son. That was absolutely amazing.”

When a physician needed to do a procedure on Owen, she asked what his favorite song was. When she learned it was from the movie “Trolls,” she played the soundtrack while she worked on him, even though he was asleep.

Despite the anxiety that comes with the hospital setting, the whole atmosphere was very positive, Christa said.

Owen was in the hospital for two-and-a-half weeks. On the two-month anniversary of him going on ECMO, he had his first baseball practice. His mom got teary-eyed as she watched her son on the field.

“I was thinking that just two months earlier he was dying, and today he’s out there hitting those balls and running those bases like every other kid and you would never know he was ever sick.” 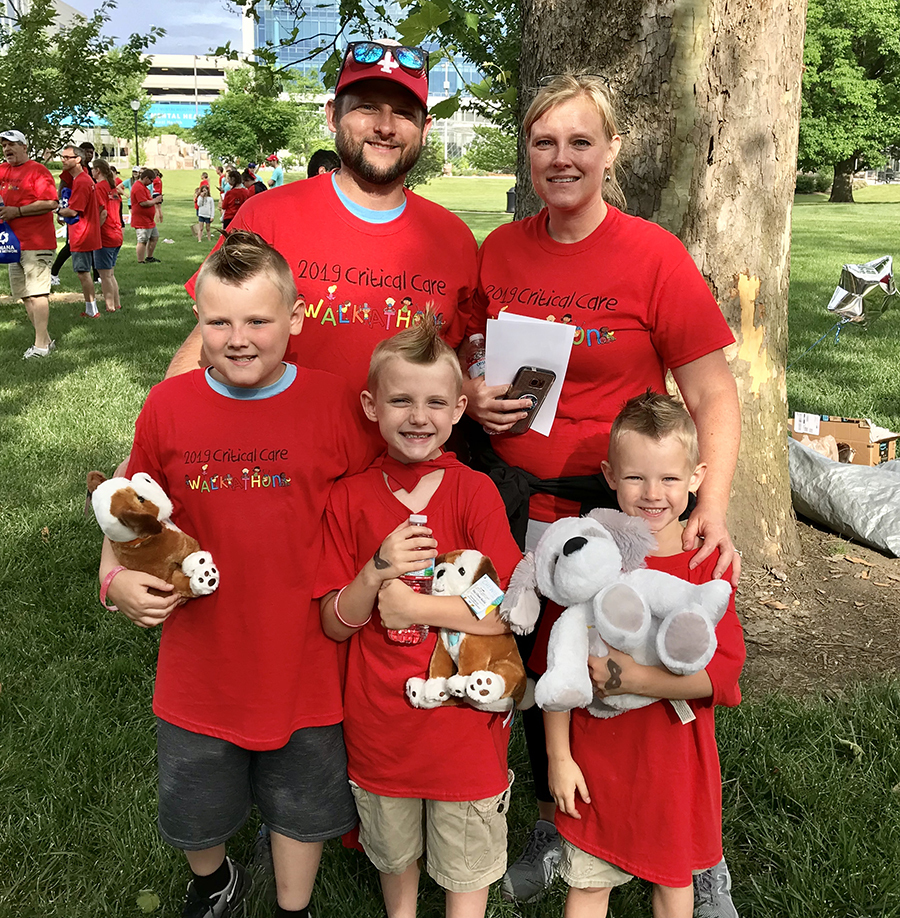 The entire family returned to Riley earlier this month for the Pediatric Critical Care Walkathon. While they were standing outside the hospital, Owen told his mom that there were probably lots of little kids up there looking down at all the fun.

Her son is a bit of an old soul, she said. Quiet and calm. Thoughtful. She told him they needed to pray for those children and families in the hospital.

“Because whether they’re here for a long time or a short time, I’m sure that they’re scared and their parents are scared. It’s out of your control, and people are not used to that.”

When the Johns family returned to Riley, they saw some of the nurses who treated Owen, but they figured with all of the patients they see, they wouldn’t remember Owen. They were wrong.

“They did remember and recognize us, and that really meant a lot. That’s ‘heart work,’ that is exemplary, that is the epitome of compassion and kindness.”

Owen celebrated his 8th birthday the day after he got out of Riley. He’ll be a second-grader this fall, but first he’s looking forward to a summer of fishing, swimming and camping with extended family. His mom, who calls Owen “our miracle story,” is beyond grateful that her son is here to do all of these things, and she has a message for other moms and dads out there.

“I want people to be aware that their very healthy kids can turn so quickly. If you’ve got that gut feeling, it’s so much better to take them in. They can decline so quickly, it’s scary.”