His name is Angel, and he is a light in the darkness

First it was COVID-19, then a neurological disorder called Guillain-Barre left this 9-year-old boy paralyzed. Now he is learning to walk again.

When Angel Morales was born nine years ago, he was a light in a troubled time for his parents.

His birth was a gift, Flor Morales says. And now that he is recovering from a double punch of COVID-19 and Guillain-Barre syndrome, his light shines even brighter. 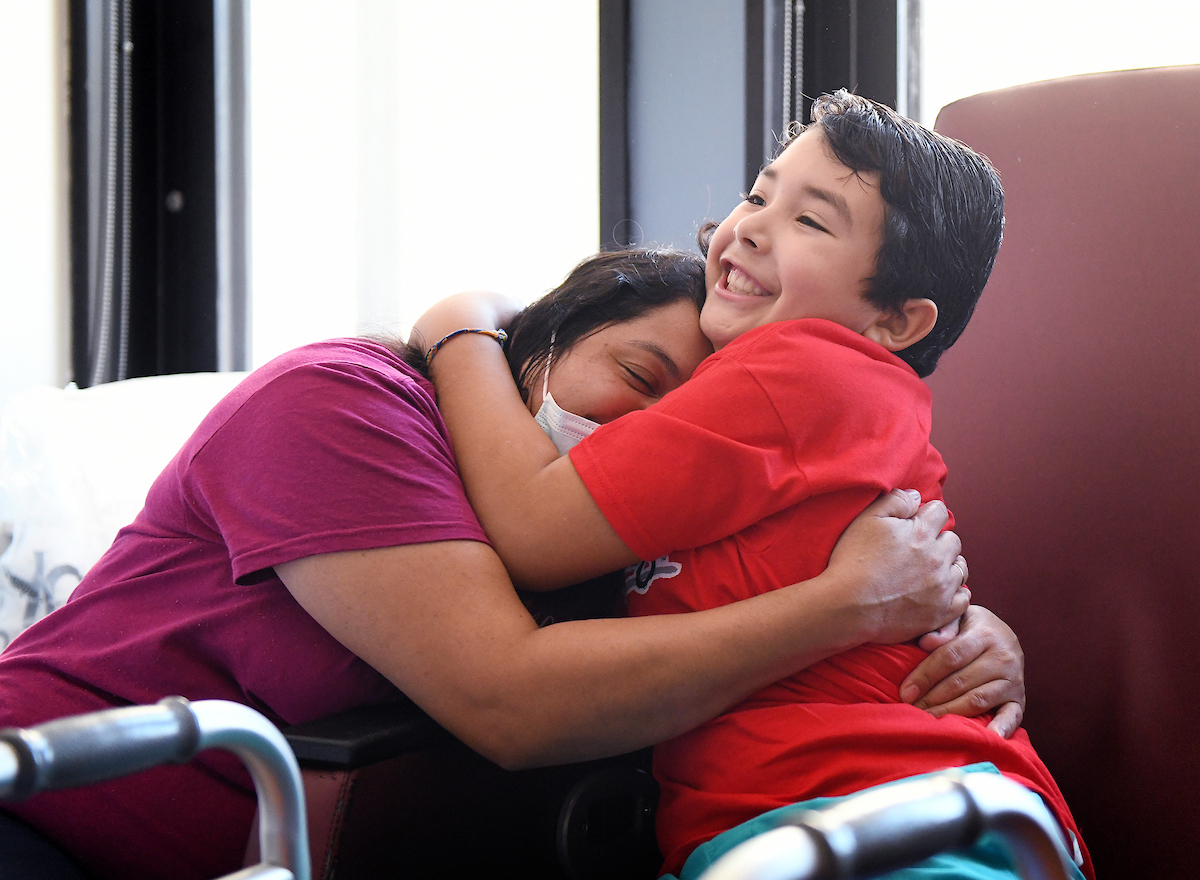 “Angel is a real angel,” Morales says through an interpreter. She speaks no English, but the love between mother and son needs no translation. Angel hugs her tightly as they pose for a photo.

“When he was born, we were going through a very difficult situation, and he came like a light,” she said. “He changed everything for us. He gave us a second chance. And now, we feel this is a second opportunity for us with him.”

Angel, who lives with his parents and two brothers in Washington, Indiana, is well-known around the small town, where most people know each other, his mom says. He’s not an athlete or celebrity, but he is friendly and social and loves to take care of people’s pets when he gets the chance.

When the fourth-grader first complained of pain in his lower back in June, Flor and her husband, Jesus, thought it was because of a fall he had taken. But a visit to his pediatrician ended with the physician telling them to go to the emergency department at the local hospital. He was subsequently referred to Riley Hospital for Children in Indianapolis.

By the time he arrived at Riley on June 12, he was in critical condition, his mom said, and a test for COVID-19 came back positive, despite him not showing typical symptoms for the virus. But it was the diagnosis of Guillain-Barre (GBS) that really shook the family.

A possible link between the virus and neurologic complications inherent with GBS is being explored after a small number of cases have been documented around the world. Inflammation caused by the infection can trigger an immune response that leads to the neurological disorder, one study indicated. 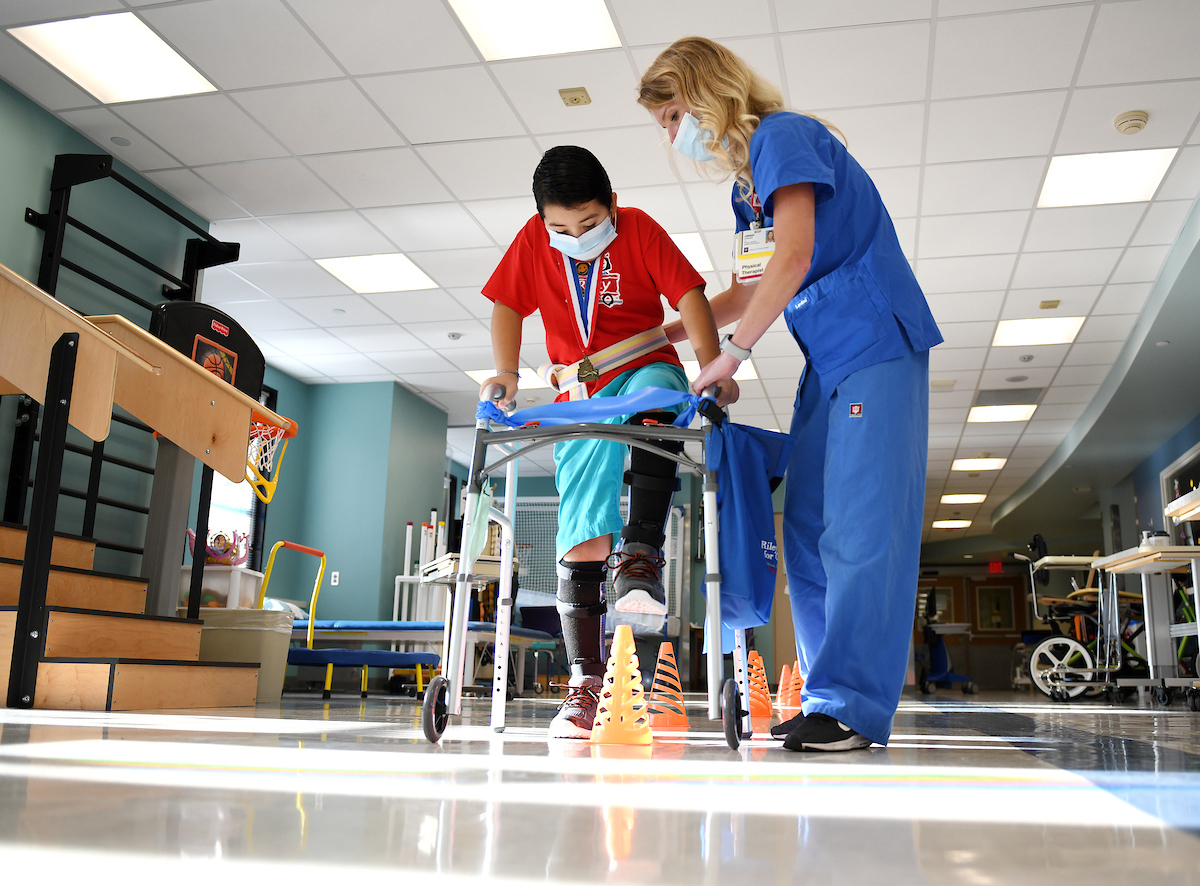 GBS is a rare condition in which the body's immune system attacks its own nerves. Weakness and tingling in the extremities are usually the first symptoms. These sensations can quickly spread, eventually paralyzing the whole body.

That’s what happened to Angel. For weeks, he was confined to his room at Riley. He spent part of that time sedated and on a ventilator, and when he awoke, he was unable to move. The therapy team at Riley knew he needed to begin a regimen of physical and occupational therapy as soon as possible, but he couldn’t leave his room due to COVID restrictions.

“To make sure he stayed safe and the rest of the unit stayed safe, we had to wait quite a while to get him to the rehab unit,” said physical therapist Lindsay Schaefer.

But that didn’t stop them from working with him.

“There were two therapists over at Simon Family Tower who saw him regularly, because we all knew as a therapy team that he needed to be coming here,” she said. “There were just a lot of logistics to figure out. Everyone worked really hard together to figure out a way to get him over here while keeping other kids and families feeling safe.”

Once he was transferred to Riley’s inpatient rehab unit, the therapists planned to work with him in a private room, but in his first week there, he had two negative tests for COVID, so he was allowed to work out in the gym.

“He loves socializing,” Schaefer said of her young patient. “He’s excited to meet new kids on the unit, and he’s always asking everyone their names. I wanted him to be off precautions and be able to experience being a kid again instead of being stuck in a room.”

The transition has been good for him.

“I remember clear as day, when we got him into a private therapy room down here for the first time, I said, ‘What was your favorite part of therapy today?’ And he said, ‘leaving my room.’ That shows how being stuck in one room for so long is hard.”

“When they told us I had the Guillain-Barre with the COVID, that’s bad news,” he said, “because I had to wait a long time to be here.”

Angel, whose birthday came and went while he was critically ill in June, has spent seven weeks on the rehab unit now, and he is counting down the days until his discharge Sept. 2. 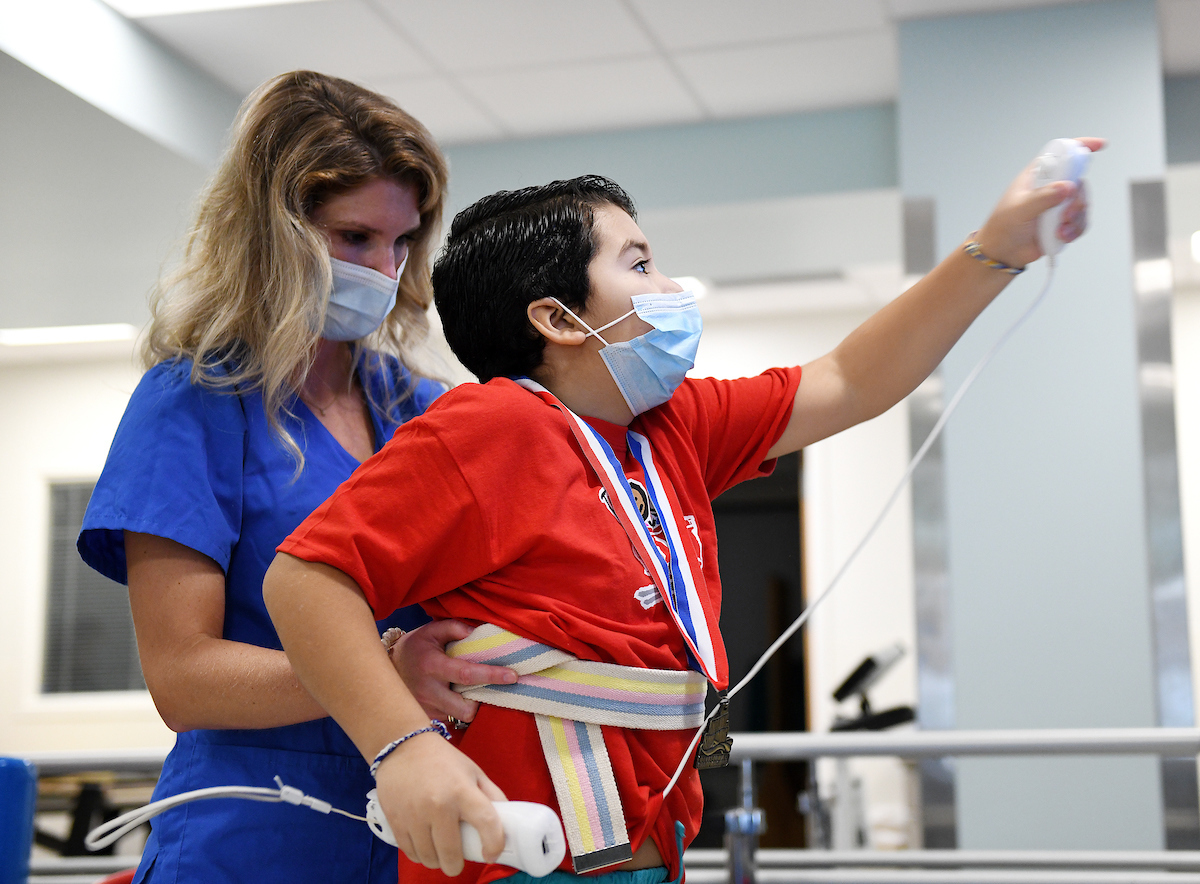 During a recent therapy session with Schaefer, he wore a medal around his neck for tackling the “big stairs” in rehab. In this session, he first works on his arm strength and coordination by playing a video game standing up. Then he builds up his leg strength by stepping up and down a small set of stairs sideways.

He’s come so far, Schaefer said, as Angel took a break between sets. He shakes his head when she asks him if he wants to tell the story. Instead, she goes ahead.

“I can do more without the walker,” Angel says quietly, but when Schaefer asks if he wants to show off a little bit, he is adamant that he does not want to.

Regardless, Schaefer is proud of him.

“Look how far you’ve come,” she says to Angel. “It can be frustrating, but we fight through it because we’re all a team, right?”

He nods, then heads back to the stairs to continue his leg lifts.

Later, while Angel is talking to his mom, Schaefer shares a poignant moment she had with the boy.

Schaefer felt tears gather in her eyes and did her best to answer him.

“I don’t know why you got it either, but you’re here now, and we’re going to fight through it. I’m going to keep you safe,” she told him.

“He looked me square in the eye and said ‘I trust you.’ It was a powerful moment.” 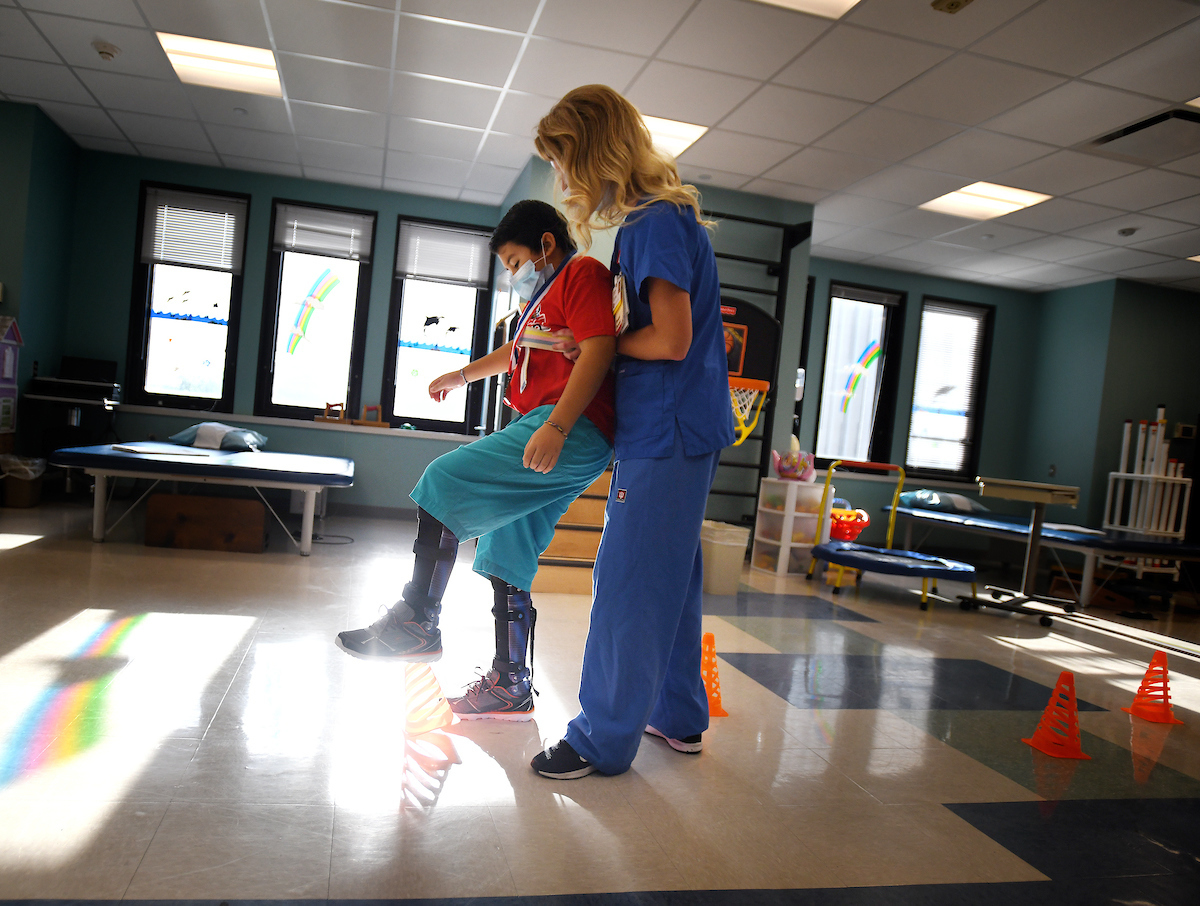 Her goal now is to have him leave the hospital without his walker, and that day should be coming soon.

Angel lets go of the walker and takes a step as his mom stands ready to catch him. She whispers something into his ear, and he shakes his head vigorously.

“She is saying I have to come work here someday,” he tells Schaefer.

“I would love to work next to you, Angel.”

Like any 9-year-old, Angel has good days and bad days, his mom says. She has stayed with him 24-7 since that June day when he first came to Riley, spending the first several weeks isolated with him in his room in Simon Family Tower. The negative COVID tests and move to rehab seven weeks ago have brought a renewed sense of hope to them both.

“This illness caught us by surprise,” Morales said. “But we believe in God, and for God nothing is impossible. We have to have faith all the time.”

She adds that while her son is still a child, he thinks like an adult, and he is grateful for all of the nurses, therapists and physicians who have worked with him.

“Before he goes to sleep, he says a prayer, thanking all the people who have been taking care of him,” Morales said. “Even though his illness has been painful for him, he’s grateful.”