His life started with a traumatic delivery and a heartbreaking diagnosis, but now he’s a happy, active little boy

Evan Brenneman has a rare disorder called Prader-Willi syndrome. One of its cruelest symptoms is chronic hunger.

To look at him now, you’d never know how traumatic little Evan Brenneman’s entry into this world was.

Evan was born at IU Health West Hospital a week before Christmas in 2015. He was full-term – a week late actually, and his parents had no reason to think anything was wrong with him.

But during delivery, he released and inhaled fecal material (meconium) and had to be resuscitated at birth. That wasn’t the worst of it.

Natalie Brenneman is telling the story of her son’s birth while a now 3-year-old Evan shakes off the effects of a nap in his stroller in the lobby of Simon Family Tower at Riley Hospital for Children. 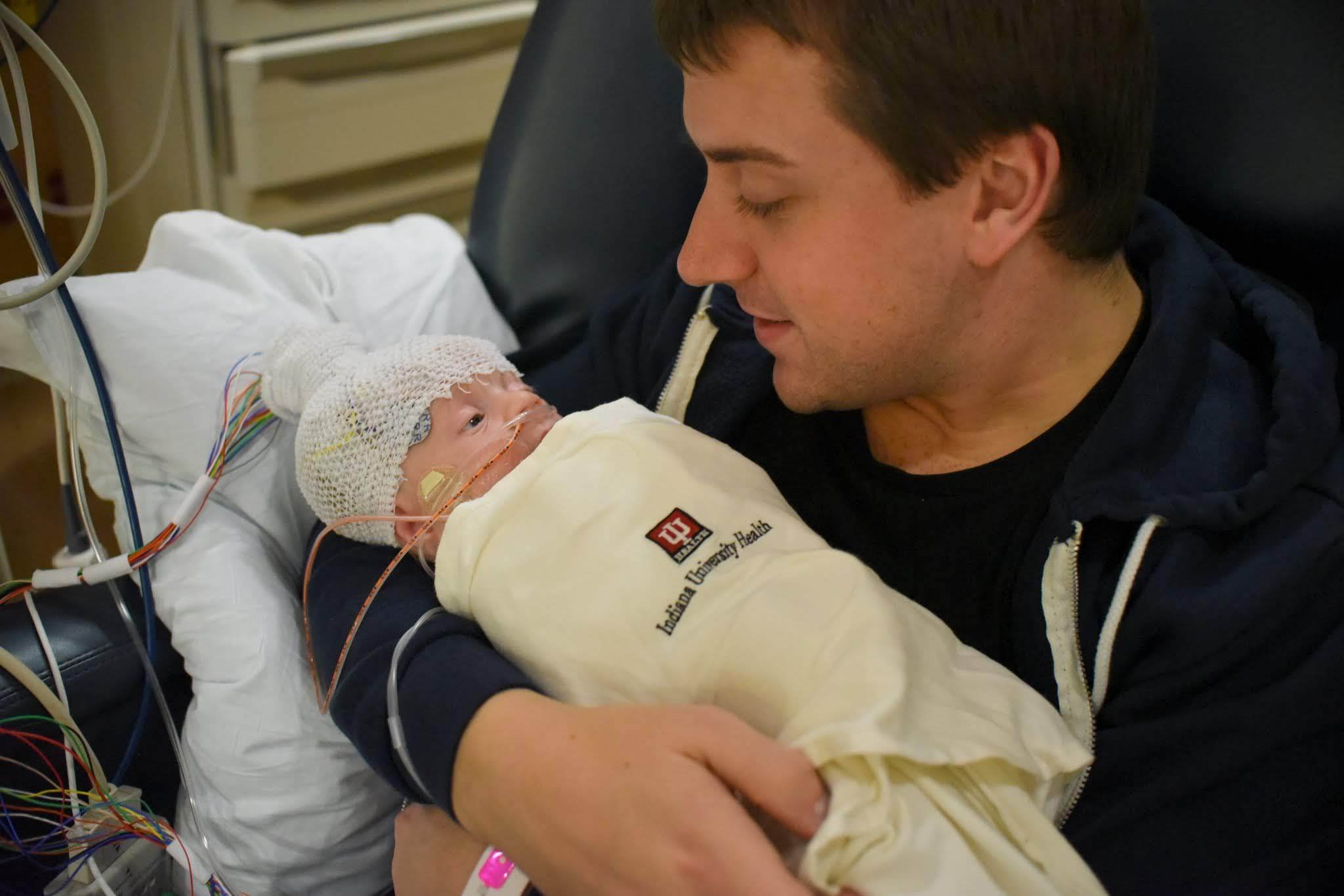 Forty-eight hours after his birth – his mom remembers he was covered in green slime when he came out – Evan was transferred by ambulance to Riley, where he spent three weeks in the NICU.

While at Riley, doctors ordered a blood test for a rare, genetic disorder called Prader-Willi syndrome. Evan had many of the symptoms – low muscle tone, feeding and breathing difficulties, delayed development and unusually fair hair and skin. Prenatal screenings generally don’t include PWS because it is rare, afflicting about one in 15,000 to 20,000 children worldwide.

The phone call after they were released from the hospital sent Natalie and husband Blake into a tailspin. The test was positive for Prader-Willi, a disorder they would soon learn meant unusual challenges for their son, not the least of which is a symptom called hyperphagia – chronic hunger.

AFTER DIAGNOSIS, A BLACK HOLE 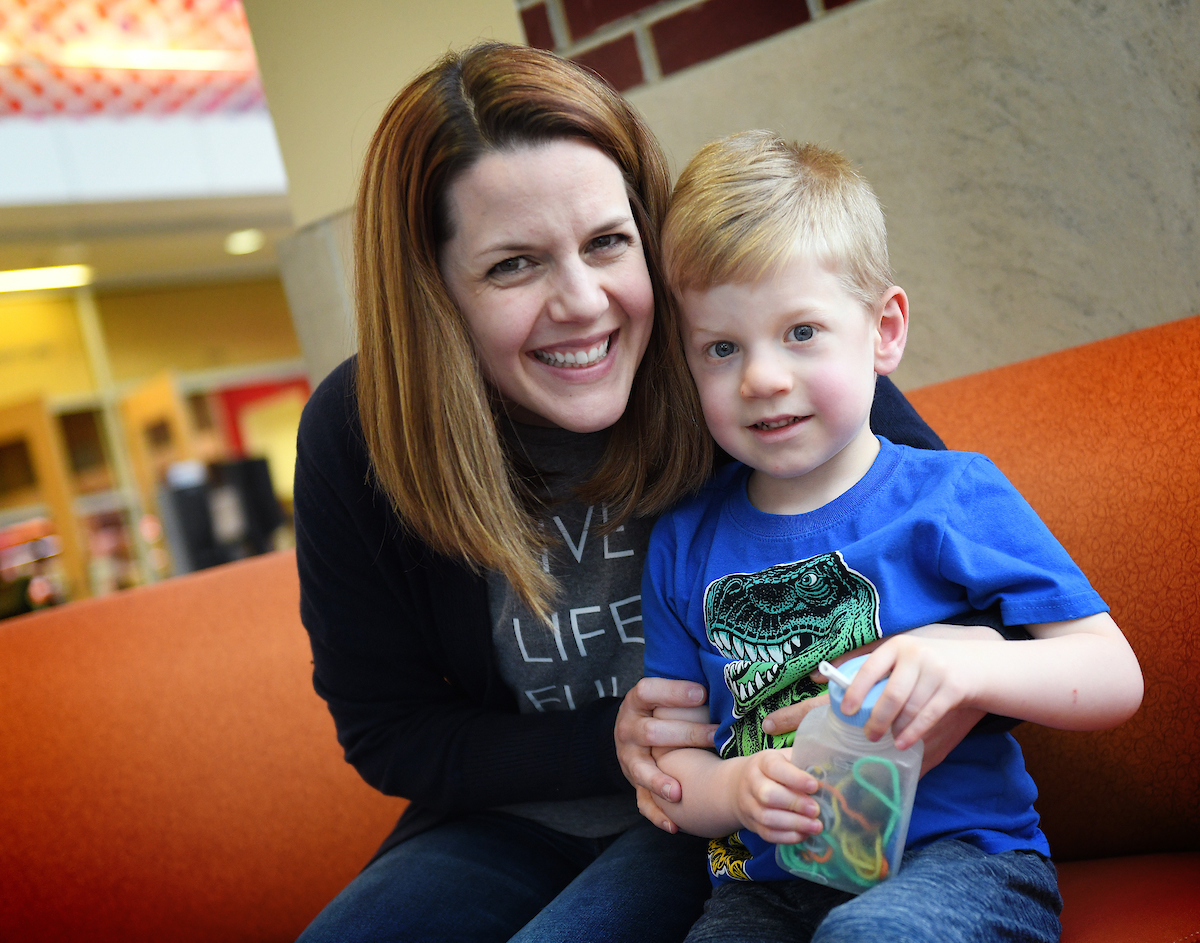 Imagine for a minute what that might be like – to know that your child will always feel hungry no matter what he eats. It’s a cruel trick that PWS plays on the brain. Beyond that, an online search told Evan’s parents that he might be nonverbal and he could die of obesity-related causes as a young adult.

At the time, Natalie said it felt like she and her husband had entered a black hole – there seemed no way that they could pull themselves out of it. But the early diagnosis also meant early intervention. So Evan has had the benefit of physical therapy, speech therapy, growth hormone therapy and a special diet since he was a baby.

Evan has seen a team of physicians at Riley since he was born – Dr. Jordan Huskins in developmental pediatrics, Dr. Tyler Christman in orthopedics, Dr. Katherine Hubert-Chan in urology and Dr. Nancy Johnson in endocrinology at IU North. He is followed by genetics, pulmonology, ENT, neurology and cardiology as needed. Lately, his mom said, they’ve been in a honeymoon phase and haven’t needed to spend much time at the hospital.

Not that raising a child with special needs is ever easy. Especially now that the Brennemans, who live in Plainfield, have added son Benjamin to their family. Benjamin, 14 months, is healthy.

“We were pretty grief-stricken at first,” she said. “That has mostly faded away, though it still comes in waves. Having a kid with additional needs can be difficult and sad – wondering about his future. But it’s been beautiful too. It seems like it’s brought us a lot more joy than sadness.”

Part of the reason for that is because the family has found community among other PWS and rare disease families – they are active in fundraising for the Foundation for Prader-Willi Research. (May is Prader-Willi month.) Friends and family have rallied around them, people they don’t even know have heard their story and jumped on board, and people from their past have come back into their lives. 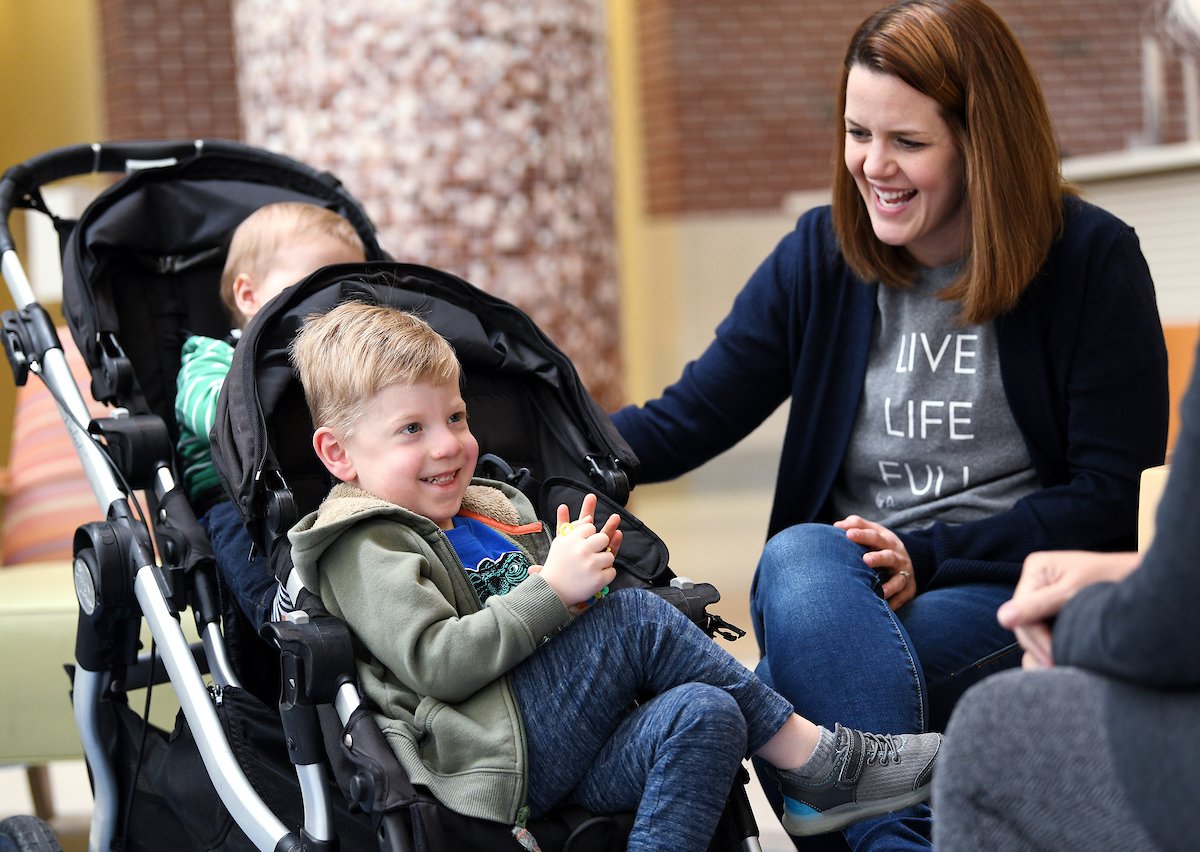 As Evan starts to wake up from his nap at Riley – thanks to brother Benjamin tugging on his hair – his playful personality begins to peek through. He looks at an animal book and mimics the noises the animals make. His monkey imitation is especially good.

His parents refer to him as “the mayor” because he loves to meet people. He’s chatty most of the time, Natalie said, and loves to tell stories and sing, but articulation is difficult. He and his parents used to communicate via sign language, but he doesn’t sign much anymore, she said. “He’s able to vocalize pretty much everything he wants to communicate.”

Thanks to nightly growth hormone injections, Evan is pretty much on par with his physical development. In January, he started developmental preschool after aging out of First Steps and is doing very well. His favorite part? Climbing aboard the big, yellow school bus that comes to pick him up. 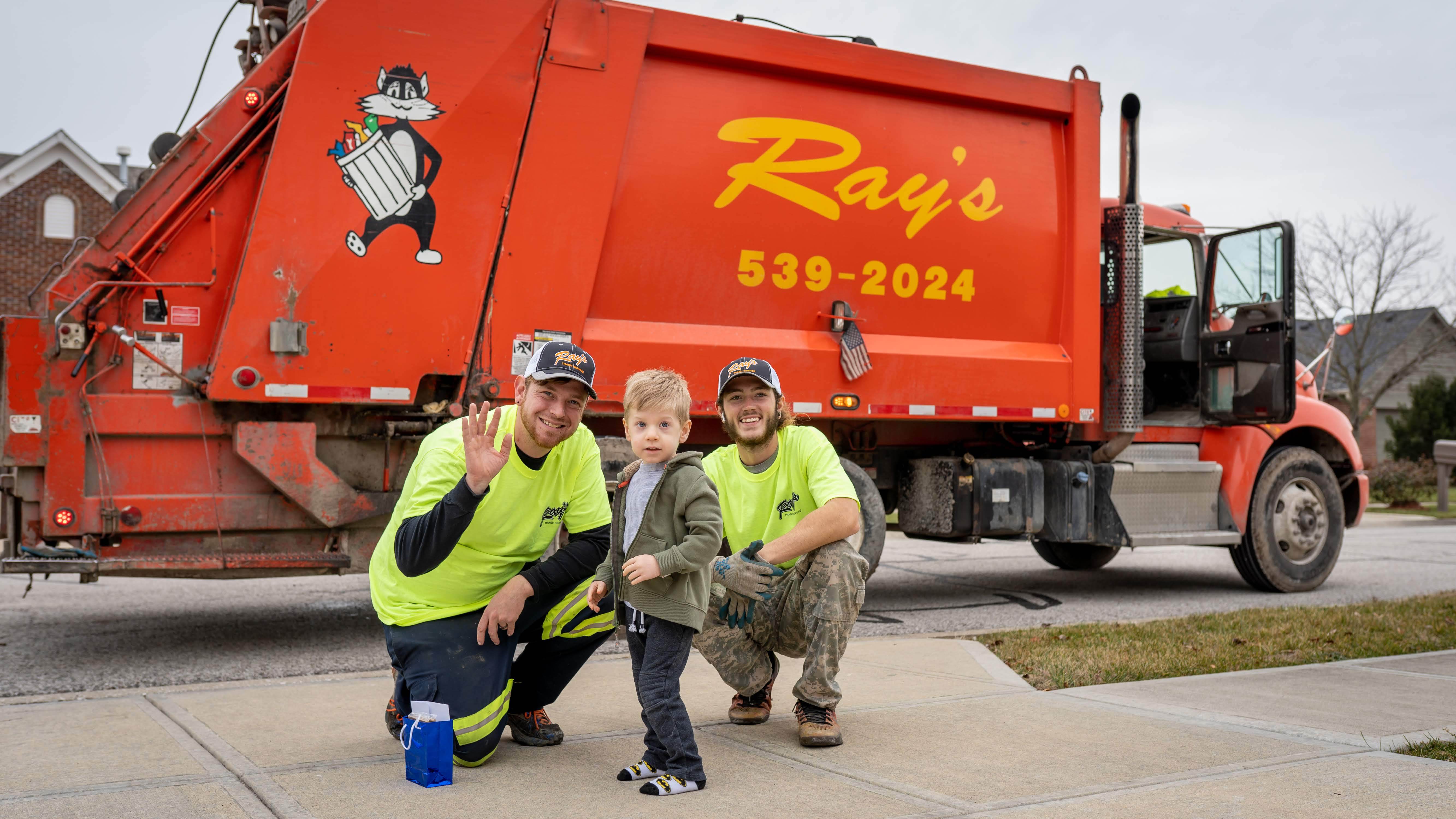 Like many little boys – and plenty of girls – Evan loves anything with wheels. Fire trucks, police cars, school buses. But his favorite vehicle might be a garbage truck. Evan has developed a special friendship with the trash man who comes by his house in the big orange truck every week.

Thursday is garbage day, and Evan routinely likes to greet James Bullock from the door or the driveway. In December, Bullock hopped off the truck to give Evan a hug and a backpack full of Ray’s Trash Service swag. Ray’s has helped sponsor the family’s annual walk to raise funds for Prader-Willi research.

After a story appeared in the IndyStar about Evan’s friendship with Bullock, friends and family gifted the little boy with an entire fleet of toy garbage trucks.

“I THINK HE COULD EAT ALL DAY” 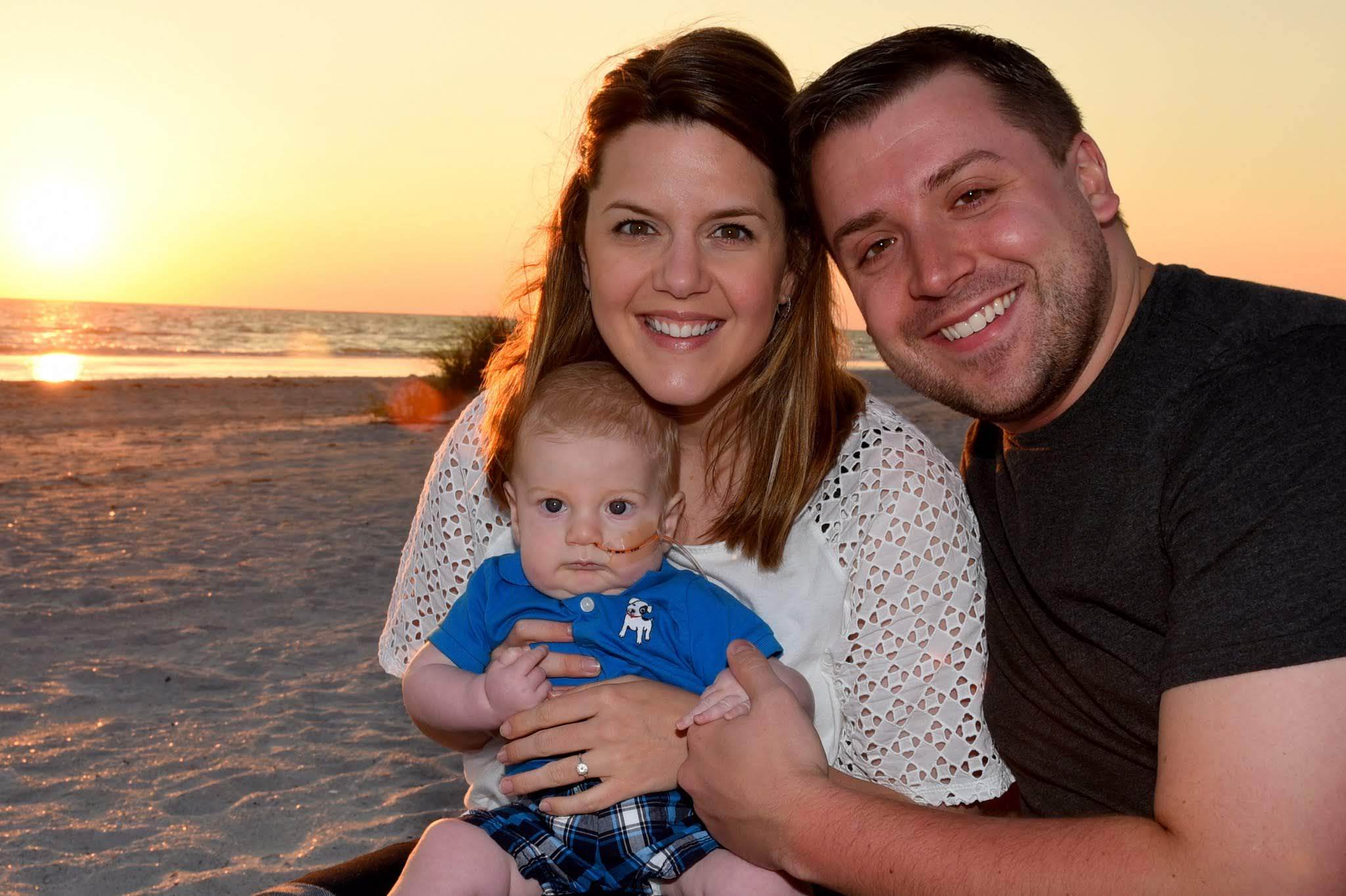 Right now, growth hormone therapy is the only approved treatment for PWS, though there are drugs in the trial stage. But the disorder has a broad spectrum, Natalie said. The chronic hunger doesn’t appear to have set in for Evan yet (researchers say it can kick in from ages 3 to 8). But he is very preoccupied with food, his mom said, almost obsessive. As is common with families dealing with PWS, the Brennemans lock their refrigerator and pantry.

Evan’s meals are strictly controlled – a low-carb, high-quality-fat diet with no added sugar. There is no grazing outside of meal and snack time. Evan always eats everything on his plate.

“I think he could eat all day,” Natalie said.

As a form of mental training, the parents have taken their endocrinologist’s advice and practice saying “I’m full” and rubbing their stomachs after a meal. Evan, who has a slow metabolism, has started doing it too.

“I don’t know that he truly experiences that sensation, but it seems to work well,” she said. “We’re very serious about his nutrition and believe that can help alleviate some symptoms of the disorder. A lot of families with older kids will report that hyperphagia is more in control when their diet is controlled.”

Natalie doesn’t know what her son’s future looks like, a fact that really bothered her at first. But then she realized that is true of all kids.