Traci Dayhoff thought she might want to be a police officer, but she took her problem-solving skills to the field of nursing. “Looking back, I think God had a plan all along, because I was made for this job.”

Traci Dayhoff used to think she wanted to be a police officer or a lawyer. Lucky for patients at Riley Hospital for Children, she did neither, choosing instead to become a nurse.

“Looking back, I think God had a plan all along, because I was made for this job but I didn’t know it,” she said.

Dayhoff, now in her 16th year at Riley, works as a patient navigator on 8 West. It’s a role that plays perfectly with her clinical skills, her organizational prowess, her compassion and her warm personality. She works with fellow nurses, physicians, residents, interns, patients and patients’ families to keep things rolling on her unit.

And she does it with equal parts tenacity and encouragement.

“It takes a certain type of person to make it here,” she said. “You have to be able to comfort people at their worst times and emotionally be able to handle the kind of stress we see that involves children and their families.” 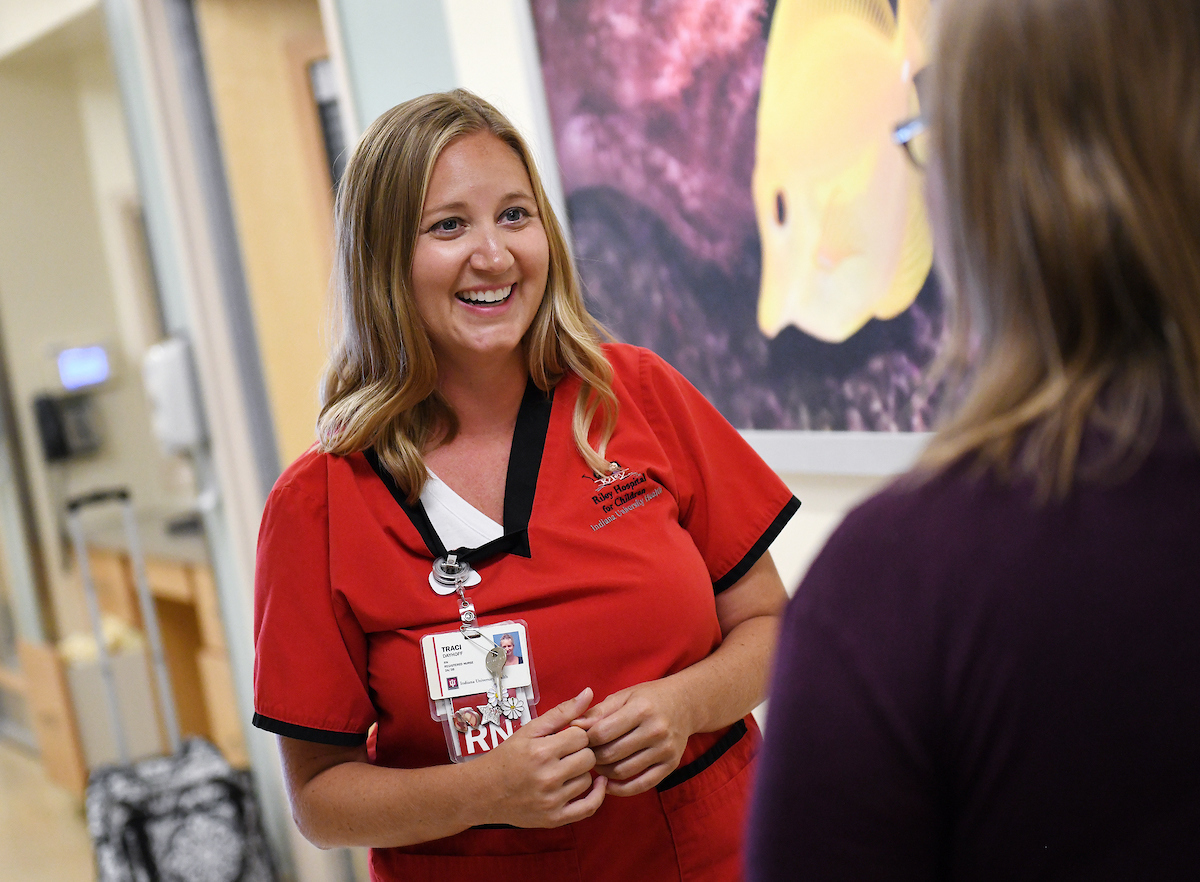 For some, Riley might be a stepping stone. For others, like Dayhoff, it’s the only place they want to be.

“I don’t know if I’ll always be in this role or do something different, but I do know that it will be at Riley. I’m a lifer.”

8 West is the pulmonary unit, so a significant portion of the patient population includes children with asthma and cystic fibrosis. Dayhoff’s goal is to keep the lines of communication between patients (and their families) and physicians open.

“We have patients who are here for weeks at a time and some who are here for only a day or two. But regardless of the length of their stay, this is a really scary time for them,” she said. “Their child is ill, they’re in the hospital, and stress levels are high.”

She understands firsthand what they’re going through.

Dayhoff was a Riley mom 10 years ago. Her son Landon was seriously ill after birth – he’s fine now – but it opened her eyes to the struggles parents go through.

As a nurse, she felt like she was kind and compassionate, but as a parent, she saw from the other side how even a small delay could frazzle nerves.

“When my nurse said she’d be back in 30 minutes and it took longer, I understood from a nurse view (she probably got busy with other patients), but those minutes really dragged on from a parent perspective. Now I make a point to update parents on the dot even if I don’t have the answer at that time.”

And she learned this: “The days are really long in the hospital for parents. A few minutes of adult conversation (completely unrelated to patient care) really goes a long way!”

Dayhoff makes it her job to ensure parents are as comfortable as possible with their child’s treatment and, most important, that they understand what to expect from the care team. That means answering a lot of questions and serving as a liaison between physicians and families when necessary.

She rounds with the care team every morning, visiting each patient, then follows up with the families before the end of the day to make sure they have the information they need.

She comes in at 6 a.m. every day through the week so she can spend an hour with the night shift to find out how their night went, discuss treatments and close any gaps between night and day shift. She reviews patient charts and makes sure that any patient who is due to be released has everything in order – from prescriptions to car seats.

“It’s the perfect role for me,” she said. “It’s a hodgepodge – part nursing, part social work, part chaos coordinator. I just love it.” 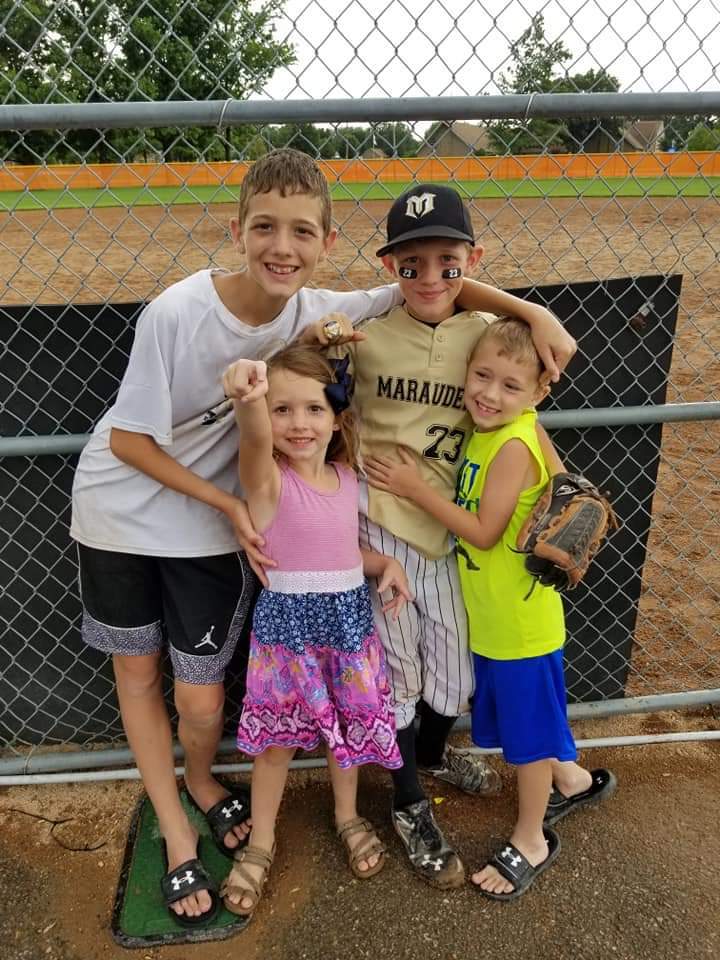 Dayhoff, a mother of four, knows all about chaos. When she’s not at work, she’s hanging out with her children, ages 13, 10, 7 and 5, and husband Kevin. The family had just returned from a trip to Holiday World and were heading to a baseball tournament recently when Dayhoff raced down to Riley in the middle of her vacation.

Why? She had to bring in candy and cards for the departing interns and residents who were leaving after a month-long rotation on 8 West. It might seem like a small thing, but to her – and to them – it’s important.

Each month, a new crop of interns and residents rotates through the unit. She helps them acclimate to the floor and the patient population and offers a sympathetic ear when they have concerns. She also makes note of their favorite candy.

“Every month we shake things up. It can be challenging, but we get a month with them so we need to make the most of it,” she said. “We need to make them feel welcome and comfortable talking to us and asking questions. We embrace that on 8 West.” 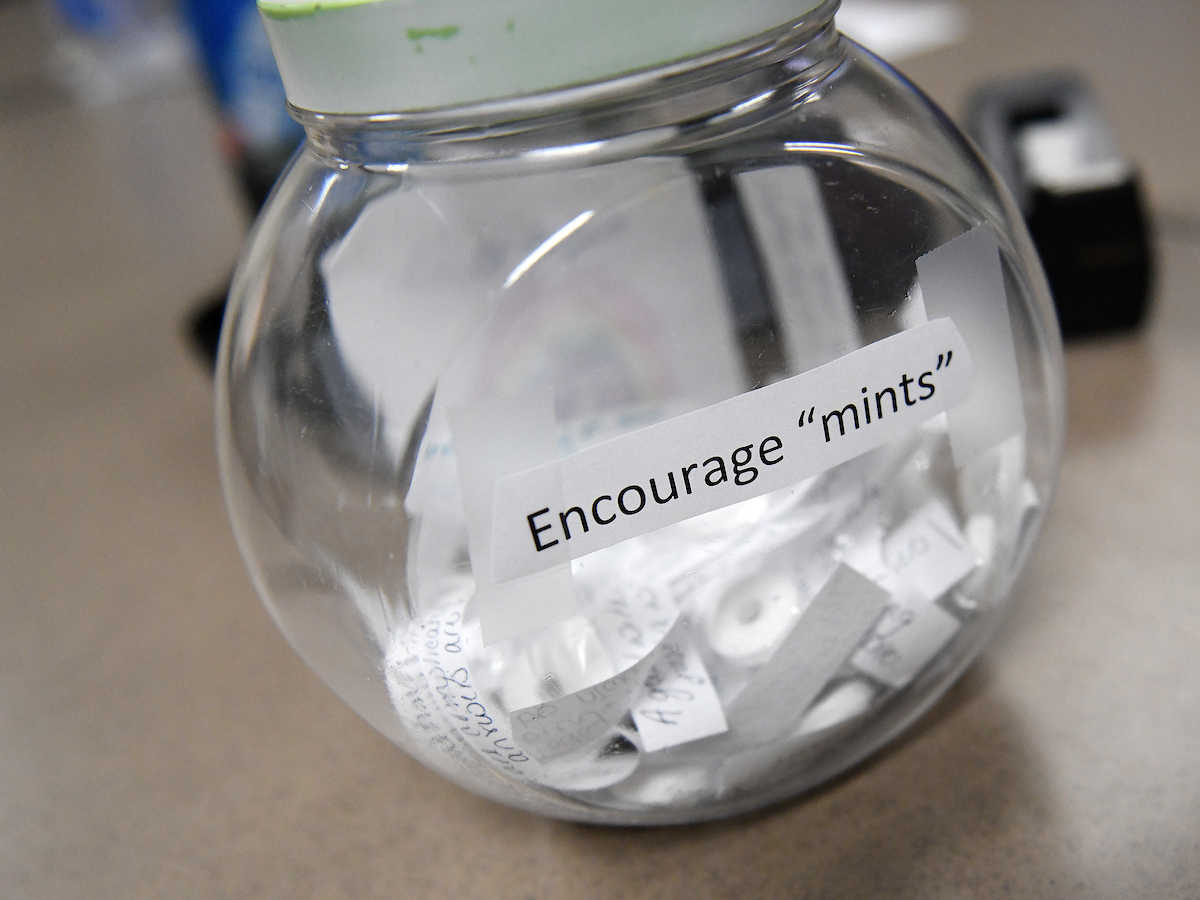 Channeling her inner positivity, she stocks a jar of “encourage mints” in the doctors’ room off the floor. She buys LifeSaver mints in bulk, then writes down a few words of encouragement or a joke on paper and wraps it around the candy. A Wall of Encourage Mints features some of her best work, as selected by the visiting physicians.

Dayhoff is on the receiving end of kindnesses as well. She keeps a box of awards and keepsakes from patients at home. But in her desk drawer, she has a folder filled with notes from doctors who’ve been touched by her thoughtfulness and appreciate the role she plays in making their job easier.

“Keep breaking barriers and keep building a culture that we can be proud of here at Riley. You are the best,” reads one card.

And another: “For your amazing selfless love, your constant motivation, your positive spirit and your commitment to both your colleagues and patients alike, you’re the reason this rotation leaves a smile on our faces. Thank you. You make every day better.” 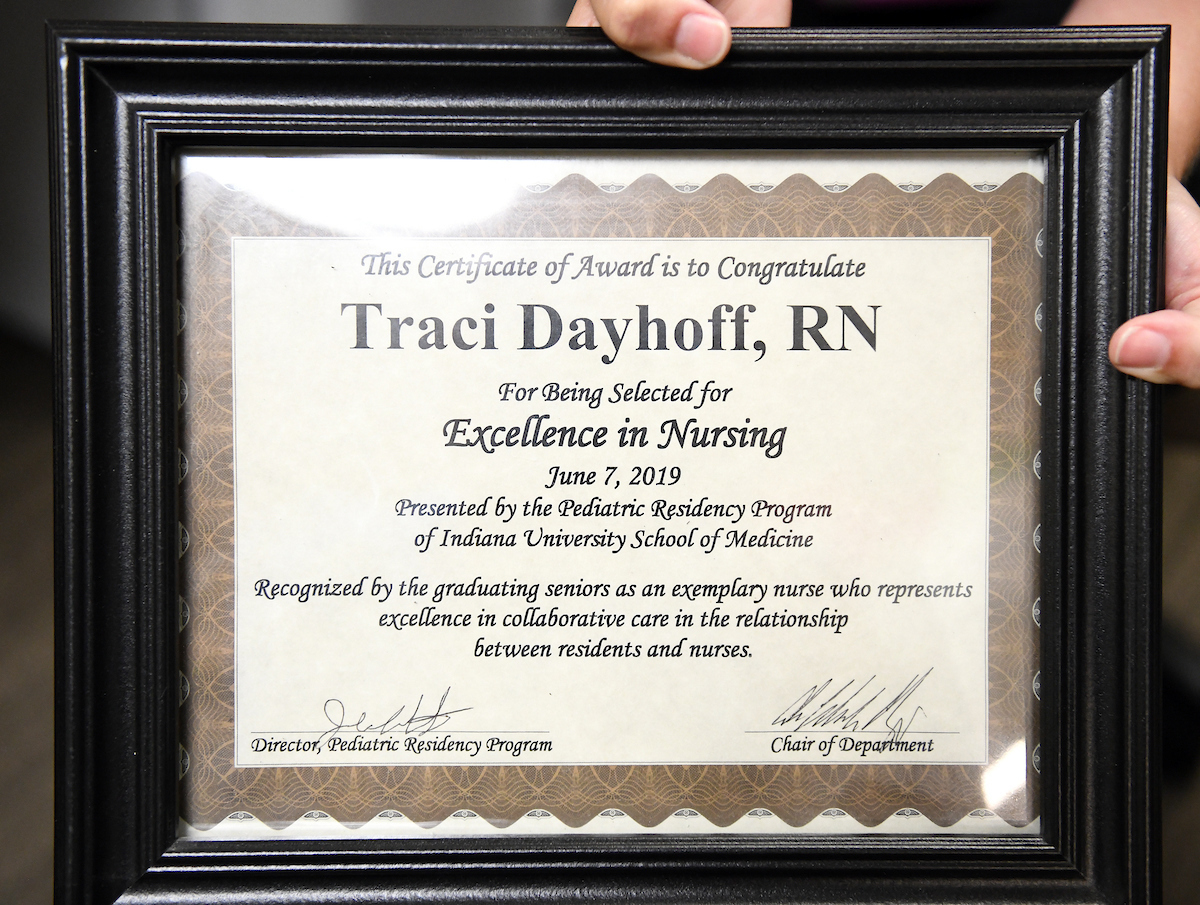 SHE SAW THE LIGHT

Dayhoff started out as a staff nurse working nights when her kids were little, then transitioned to charge nurse before moving to days.

When a position opened up as a clinical adviser, she took on the responsibility of helping mold new nurses throughout the hospital.

“I loved that role, but then this role (patient navigator) was created on 8 West.”

So instead of working in different departments, she can make the same kind of impact on her unit every day.

“What I do now is support everyone,” she said.

In addition to the physicians, she’s a resource for other nurses who want to bounce an idea off her or need a second pair of eyes on a patient. She works with case managers, physicians, respiratory therapists – all to make sure everyone is on the same page and working toward the same goal – “which is the good of our patients.”

Kayla Arthur, who now works in case management on 8 West, started out on the floor as a nurse with Dayhoff on 8 West more than a decade ago.

While she sometimes misses bedside nursing, Dayhoff still gets plenty of opportunities to step in and help when the unit is short-staffed. In addition, she handles orientation for new residents and teaches a boot camp to new hires on the unit, making sure they are schooled in the latest treatment of patients with asthma, CF and tracheostomies.

“There are so many things I love about what I get to do now,” she said. “I can see the difference it makes for families, physicians and nursing staff. I always say not every day is great but there’s something great in every day.”

So even on the bad days, “when it seems everybody is drowning, that’s when I can step in and say ‘what do you need me to do?’ I love that.”

Dayhoff decided not to be a police officer, but she does consider herself a problem-solver.

“I think that’s why I wanted to be a detective. I love to figure out what is wrong and then fix it. I get to do that here and I get to do it with kids.”

Other days, she likens her role to a firefighter, where she is consumed with putting out fires all day trying to fix problems. And then there are the days when she feels like Santa Claus.

“These kids need activities in their room, so I’ll help Child Life and go get activities and play games with them. It’s just the best of all worlds. I love it.”