This Riley patient has lived much of her life in hospitals, where she spends her days doing school work online, playing video games, posting TikTok videos and talking to other gamers through her PlayStation.

At 13, Haley Hardsaw has never been to school, and her best friends are kids she’s never actually met in person.

The teen, who has suffered heart/lung ailments since birth, spends her days doing school work online, playing video games, posting TikTok videos and talking to other gamers through her Playstation.

Haley was admitted to Riley Hospital for Children on Oct. 2. It was just the latest in a string of hospitalizations that began when she was born.

“Her story is a long one,” said Pamela Hardsaw as she prepared to spend yet another night in the hospital next to her daughter, alternating between sleeping on the pull-out bed some nights and dozing in the chair other nights.

“Since she was born, I’ve always stayed in the room with her. I’m used to not getting sleep.”

Haley was diagnosed at birth in a Louisville hospital with tetralogy of fallot (a combination of four congenital heart defects), as well as pulmonary atresia and severe pulmonary hypertension.

“They told us to say our goodbyes the day she was born because they didn’t think she was going to make it through the night,” Hardsaw said. 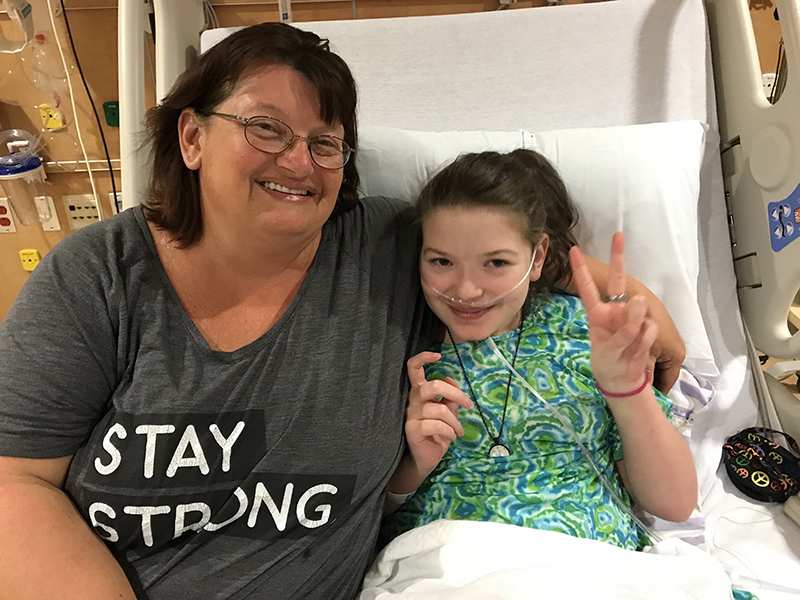 Well, Haley – whose family calls her “warrior princess” – surprised them all.

She first came to Riley about three years ago and, by her mom’s count, has undergone five open-heart surgeries here. She’s also had four strokes and two aneurysms in her young life and struggles with respiratory infections.

Her cardiologist at Riley is Dr. Michael Johansen. Her pulmonologist is Dr. Gregory Montgomery.

A heart-lung transplant could be in her future, but she is not a good candidate for the procedure at this point, due to the high risk of organ rejection, her mom said.

“She’s lived most of her life in hospitals; she doesn’t know any different.”

She misses her dad, Jamie, too. She even misses her brothers a little bit, though they are “annoying,” she said with an angelic smile.

Her friends are online, her mom said. “She talks to kids all over the country.”

Those online friends are her strongest connection to the world outside the hospital. One day she hopes to meet them in person.

In fact, if she could get up and leave her hospital bed now, she knows where she would like to go. That would be Minnesota. “To meet my two best friends in real life.”

In the meantime, she does have a new friend who just happens to be in a room down the hall from her at Riley.

Giancarlo Gomez, 7, is waiting for a heart transplant. During a walk in the hall recently, he crossed paths with Haley and then learned she loves to play the video game Fortnite, one of his favorites.

The two have not had a real conversation face to face, but they chat via their video game.

Despite her circumstances, Haley is quick to smile and to flash a peace sign for visitors. Next, she’s hoping to wave goodbye to her hospital team this week and head home with her mom.

A heart catheterization set her back a little Wednesday, but when she gets home, she’s looking forward to moving into her own bedroom and redecorating.

The theme is yet to be determined, but the color will be sky blue – just the way she likes it. As for the rest, “it will probably be something with wolves and dream catchers.”