Hearing her baby’s first cry was “the sweetest sound ever”

June 27 was a big day for Ava Brooks Breeden. She turned 100 days old, she got to test out her voice for the first time, and she had a Riley red wagon dedicated in her name.

For Alyssa Breeden, hearing her baby’s first cry was “the sweetest sound ever.”

It happened on Day 100 of Ava Brooks Breeden’s young life. That was the day a tube placed in her throat at birth to help her breathe was finally removed.

It was also the day a red wagon was dedicated in her name thanks to more than $2,800 raised for Riley Children’s Foundation by Ava’s family and friends. The license plate reads “Hitch your wagon to a star! Ava Brooks Breeden.” 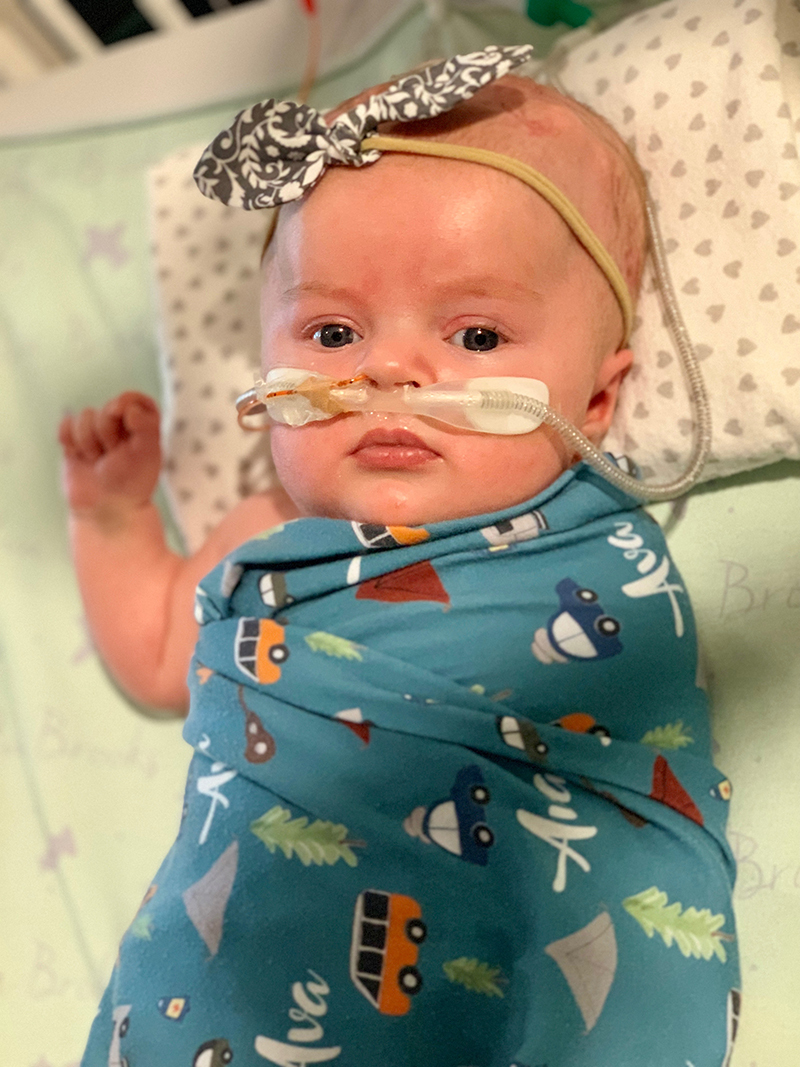 Ava has not yet known life outside of Riley Hospital for Children, but every day “she’s doing big things” to help her prepare for the day she can go home, her mom said earlier this week.

“She’s been off the ventilator for a week and a half, and she tolerated it well. She’s going strong.”

Now just shy of 4 months old, Ava relies on high-flow oxygen to breathe, but that’s a big improvement over the ventilator, Alyssa said.

“It almost feels like she was just born. We feel like new parents because we’re finally able to pick her up on our own without the help of nurses, and we’re able to take care of her more on our own.”

And now that she doesn’t have her mouth taped, she’s smiling, cooing and crying, Alyssa said.

“She has found her voice.” 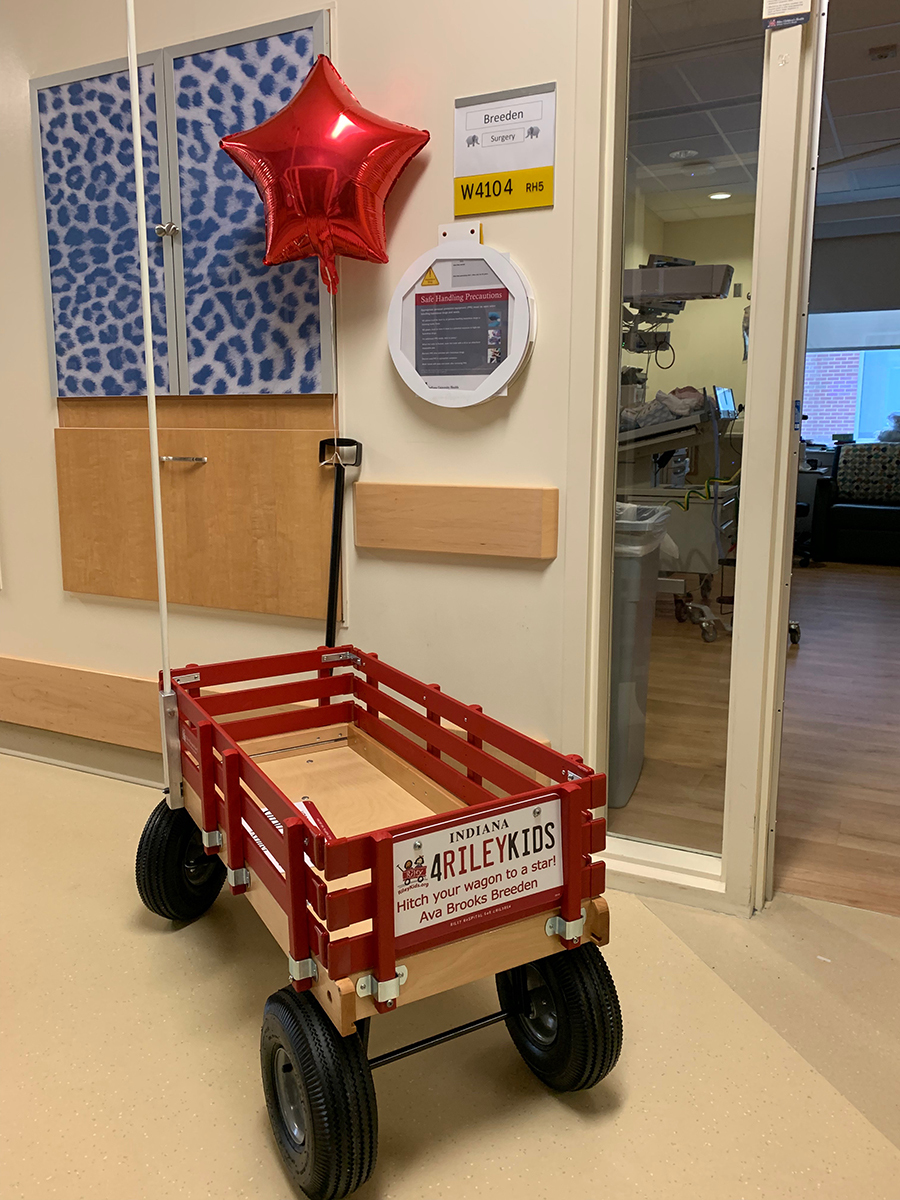 Ava was born with a little-known condition called congenital diaphragmatic hernia (CDH). It created a hole in the muscle between the chest and abdomen in utero, allowing the contents of the abdomen (stomach, intestine, liver, spleen and kidneys) to move up into her tiny chest.

Jacob and Alyssa Breeden learned of her condition during prenatal testing and have been surrounded by a Riley Hospital team since before she was born at IU Health Methodist Hospital. Ava was kept sedated for weeks after her birth to keep her underdeveloped lungs from working too hard.

She remains on a nasogastric (NG) tube for feedings, but she is able to receive her mom’s milk because Alyssa has been pumping breast milk since Ava’s birth.

“She’s already having full feeds of breast milk, and the rest I can save for her. She has a mechanized pump that delivers my milk to her.”

It’s certainly not how she envisioned feeding her baby at this point, but Alyssa is grateful Ava is at least getting her milk for now until she is able to take it orally. 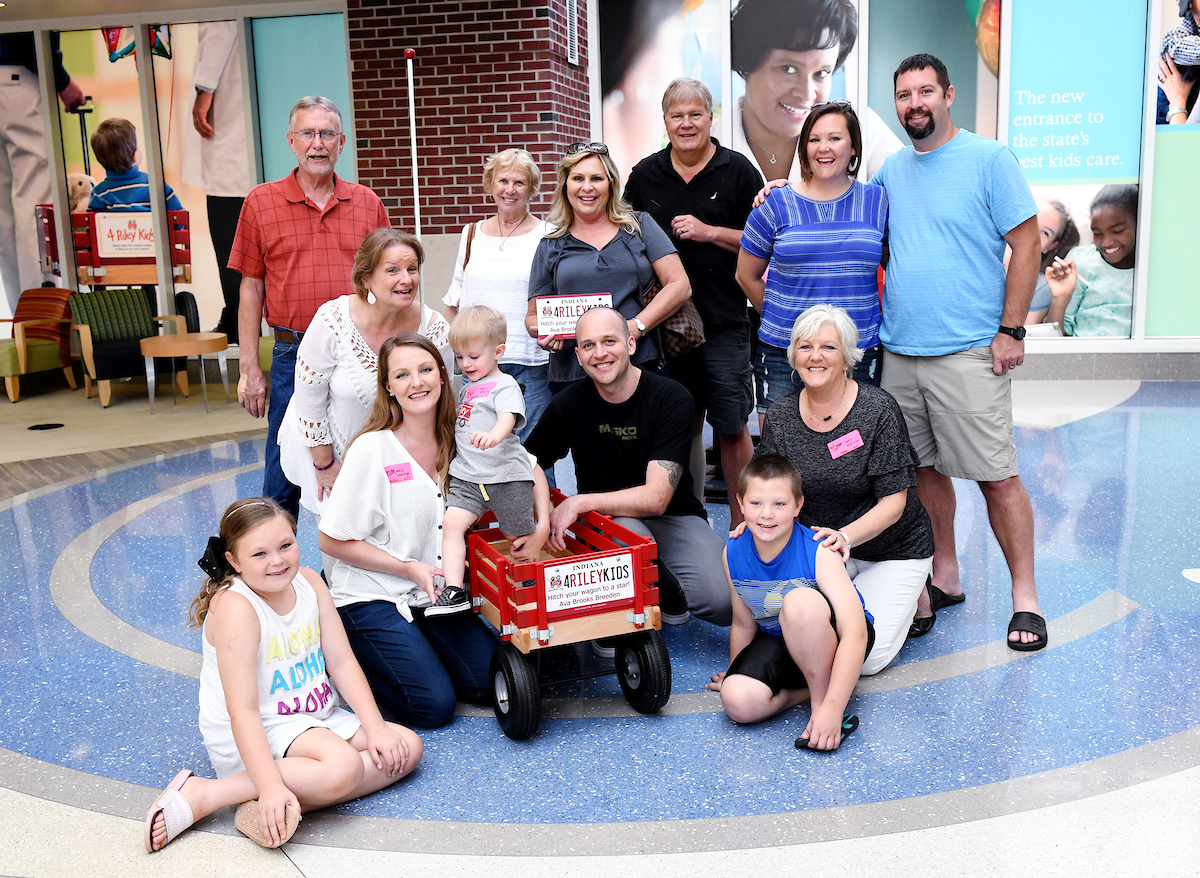 Aside from her medical team, Ava has a large group of family and friends supporting her. Many of them turned out June 27 for the Riley wagon dedication in her name at Simon Family Tower. Ava was resting in her room at the time, but her big brother Tilman, 2, couldn’t wait to climb in for a ride in the lobby.

Before the family released the wagon to the fleet of those used to ferry kids and bags through the hospital, they took it up to Ava’s room for a bit to get more photos. They’re hoping that soon they can get pictures of Ava in the wagon herself. In addition to the license plate on the back of the wagon, the family received a duplicate copy of the plate. Wagons are named for the duration of their circulation at the hospital.

Alyssa said she is grateful for all of the people who donate to Riley, not only for Ava but for all of the other kids. The wagon fundraiser in her daughter’s name “symbolizes how much support we’ve had through this whole process.”