Each year, Dr. Turrentine and his Riley team take surgical trips to China, Africa and the Middle East, spending their own vacation days operating on underprivileged children.

The diagnosis of a heart defect in a child is an emotional event. Each year, in the United States, about 40,000 babies are born into such circumstance. Parents, often struck by unprecedented fear, turn to pediatric cardiology teams for care. 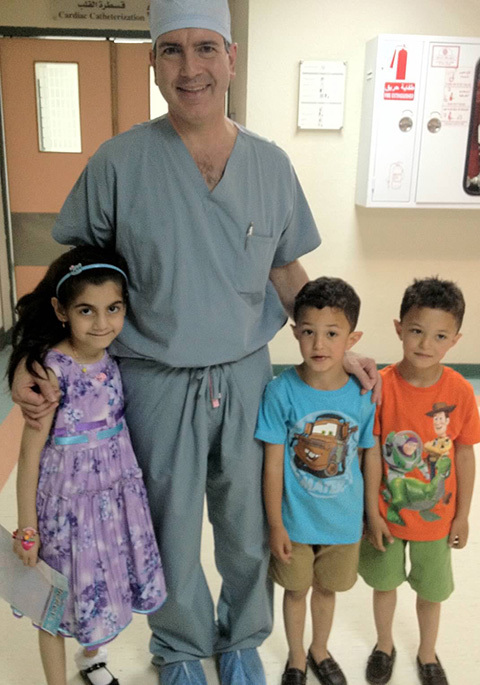 For over 20 years, pediatric cardiothoracic surgeon, Dr. Mark Turrentine, has served as a touchstone for parents and children affected by heart disease. The physician began his work at Riley Hospital for Children at Indiana University Health in 1991. Since then, he has operated on sick children in Indiana—and beyond. Each year, Dr. Turrentine and his Riley team take surgical trips to China, Africa and the Middle East, spending their own vacation days operating on underprivileged children. Since 1998, they have partnered with the Gift of Life program through Rotary International, meticulously organizing these trips months in advance to aid others abroad. The team lends their time while the Gift of Life program covers all patient medical and travel expenses.

Looking back, Dr. Turrentine says, the process started out small. “We began by operating on one to three kids a year. We’d take on global patients but do the surgeries on site at Riley,” he recalls. “However, it soon became clear that we were not going to be able to operate on as many children as were in need. So, in 2007, we began to travel abroad to treat children closer to where they lived, starting with the Middle East in Amman, Jordan, later adding on Beijing and Uganda.” Each trip, he says, consists of five to six operating days. “In that span, we strive to complete at least 10 pediatric heart surgeries,” explains Dr. Turrentine. To date, he says, 25 surgical missions have been completed.

The team that travels abroad with Dr. Turrentine is created to cover all potential bases, explains pediatric cardiologist Anne Farrell, MD at Riley Hospital for Children at IU Health. “The first time I traveled with Dr. Turrentine, it was the two of us, an operating room nurse, a scrub nurse, two intensive care unit nurses and a perfusionist,” she recalls. “Ultimately, we found our little team could complete 10 pediatric surgeries overseas for the same price of operating on just one child in the United States. We could help a larger amount of kids in a shorter period of time. It was incredible.”

How are patients selected? “It’s a need-based program,” Dr. Turrentine explains. “Potential cases are submitted to the Gift of Life program by cardiologists, friends or family based on the details of their specific heart condition and their personal circumstance. In our experience, a third of the cases are often children from Iraq, a third are from Jordan and Syria or from Palestinian refugee camps. We operate on a spectrum of cases,” says Dr. Turrentine, “from minor to more complex.” Heart transplants and other complicated cases, he explains, are unfortunately exempt due to challenges with equipment and extended care. 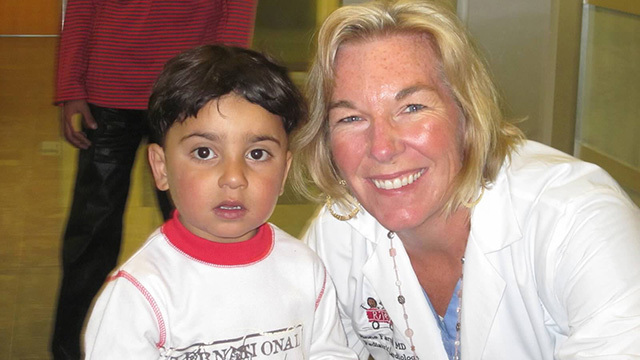 Still, no matter how firmed up the final patient list is, last minute changes inevitably arise, explains Dr. Farrell. “Often, upon arrival we learn that a baby was just born that needs urgent care so we have to alter our plans.”

From a physician standpoint, patient stories and symptom sets can be extremely unique. “Often, the children we operate on are much older than they would be if they had been born with the same condition in the United States,” Dr. Farrell explains. “Take Tetralogy of Fallot (TOF), for instance, here we’d operate on a child with this condition by 6 months of age. There, we’ve operated on kids up to 10 years old. By the time these patients are diagnosed and can even get the medical care they need, they are much older,” she says.

The result: “We encounter physical findings that you just don’t see in the States because the kids here don’t have to handle being undiagnosed for so long. We see TOF kids who have had been blue for years or have clubbed hands due to lack of circulation,” explains Dr. Farrell. “We treated one older boy whose father literally had to pick him up and carry him everywhere because this child could not walk by himself without losing breath. And then after we operated on him, he began to walk back and forth by himself,” Dr. Farrell says. “We help give kids a less complicated life.”

The success of such surgeries naturally prompt an onslaught of patient appreciation with families typically showering the team in kisses, hugs and gifts of prayer beads. “We had one family that invited us out to their refugee camp to thank us personally. Every trip, we experience this deep appreciation on a very emotional level.”

When asked why his team opted to give back in their very scant off time, Dr. Turrentine replies, “we just wanted to do something on a bigger scale and we have, and we will continue to do so. When we organize our trips we bring over only Riley team members, we don’t solicit outsiders. Due to this, our Riley team relationships are significantly strengthened. We collaborate and often work under extreme circumstances to achieve a greater good. It’s medicine at its most basic. In my opinion, there is no better team building exercise.”

Mike Rhinaman served the house he loved until the very end, and hundreds came to honor his spirit at Riley. “God bless him for his love and his service to this house. We are better because of it.”

The Man With a Magic Castle: How Riley Volunteer Bob Baxter Changes Lives

Bob Baxter volunteers at Riley Hospital by rolling around a Magic Castle full of toys for children.

Lee Neff was recently named as an honoree for the Indianapolis Business Journal’s 2017 Health Care Heroes Awards in the Volunteer category.