Michigan brewery/distillery owner shifts from beer and spirits to hand sanitizer. When he heard that Riley dialysis families might be running low, he made a special trip.

Aaron Hanson is a brewery owner by profession, but like everyone else, his life has been changed by the coronavirus pandemic.

Rather than fretting about the loss of business at his breweries in Downtown Indianapolis and Lansing, Mich., he decided to do what he could to support patients and healthcare workers in their fight against the virus. 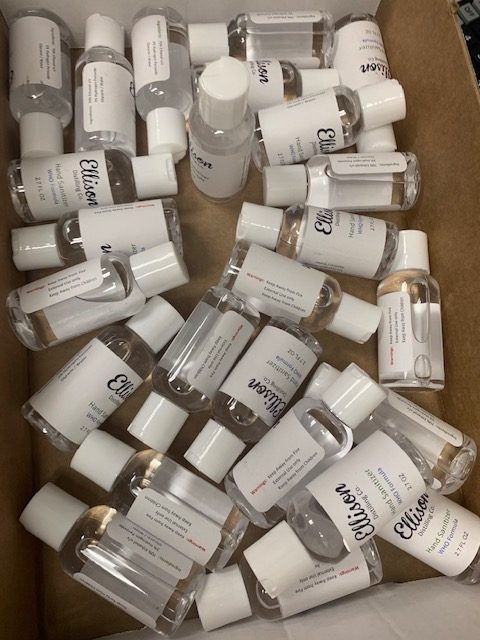 Lucky for IU Health, one of the hospitals he was able to help was Riley Hospital for Children.

“We’re just trying to do our part,” Hanson said in a phone call from Michigan, where he lives with his wife and two small children.

Rather than ship the dozens of individual-size hand sanitizer bottles and the five-gallon container his company manufactured, he had a better idea.

“I just threw it in the back of my plane and made a quick trip,” he said.

That’s right, he jumped into his small plane early Saturday morning and made the roughly one-hour trip by air, landing at Eagle Creek Airpark, where he keeps a car for frequent visits to his Indianapolis brewery.

“I’m up early on Saturday mornings anyway,” he said. “I didn’t want to ship it, thinking it could get delayed.”

He dropped it off at Riley with little fanfare – there weren’t too many people around early on a Saturday morning.

“I just slipped in and out,” he said.

It was Dr. David Hains, division chief for pediatric nephrology at Riley, who wanted to get the word out about the donation. He was bowled over by the gesture, which came as a result of friends and neighbors coming together when they heard about a need.

“Aaron had a call with our unit and personally flew and delivered enough sanitizer for all of our families to get through the lockdown,” Dr. Hains said, explaining that Riley families who do dialysis at home go through quite a bit of the infection-protection product.

“When we asked him how much it would cost, he said he would never be able to charge Riley for something like this,” Dr. Hains said. “Truly remarkable.”

Hanson said as a father, a Marine Corps veteran and the son of a woman who taught developmental education to young children for years, he wouldn’t think of charging a children’s hospital for his service.

“This was a no-brainer.”

Meanwhile, the virus has touched him in a more personal way. His 89-year-old grandmother, who lives in an assisted-living facility in Michigan, was diagnosed with COVID-19 about a week ago, but he said she is doing well today.