He helps kids discover their power amid pain

Physical therapist Jacob Copeland finds a way to relate to his patients, often using play to help them heal.

Jacob Copeland believes in the healing power of fresh air and sunshine. That’s why the physical therapist takes his patients outdoors whenever possible.

Copeland, a physical therapist at Riley Hospital for Children for five years, finds motivation from his young patients, just as they do from him. 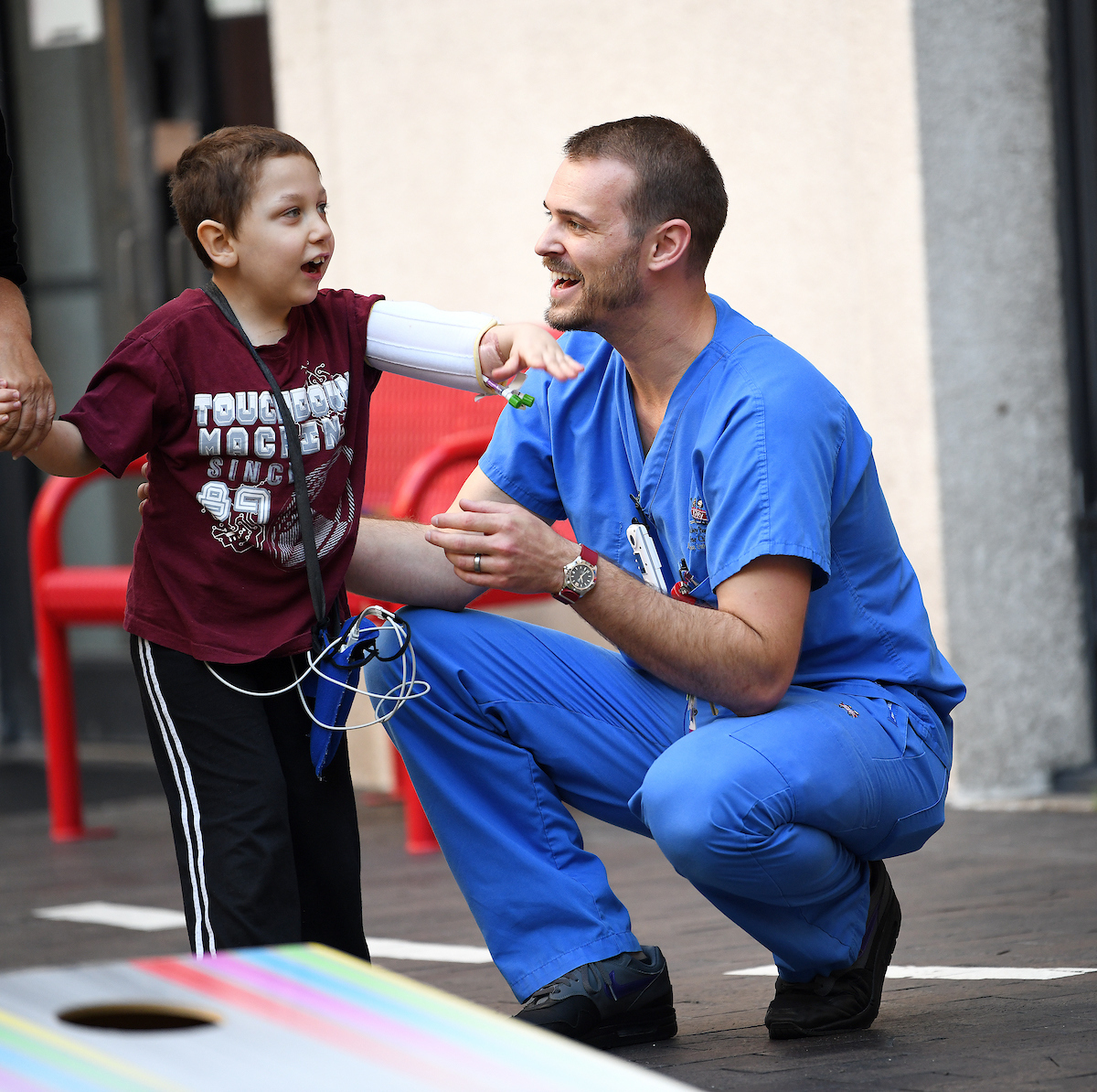 On a beautiful late-August day, Copeland is taking 6-year-old Sammy to the Child Life Zone’s outdoor area for therapy disguised as play.

“You want to go outside, buddy?”

He doesn’t have to ask the always energetic Sammy twice. Before they can go, however, there are socks and shoes to put on and a slow walk down the hallway to the “big green circle.”

That’s the spot where Sammy can climb into the wagon to go outside. As Sammy reaches out for Copeland’s hand, the therapist grabs it and says, “I’m here for you, Sammy. Show me what you can do.”

Sammy was hospitalized for an infection near his heart and is nearing the end of six weeks of antibiotics. The little boy has a heart condition and suffers from epilepsy and cerebral palsy, so walking is difficult.

“Sammy’s ankle is very contracted and stiff, and we’ve been trying a couple things like serial casting to get some range of motion back,” Copeland explained.

“Mainly what I’m working on with him is trying to build strength. All the time he’s been here he’s gotten a little debilitated, so we’re working on sitting to standing, a lot of squats and building up endurance and hip strength so that Sammy can get back to being independent.” 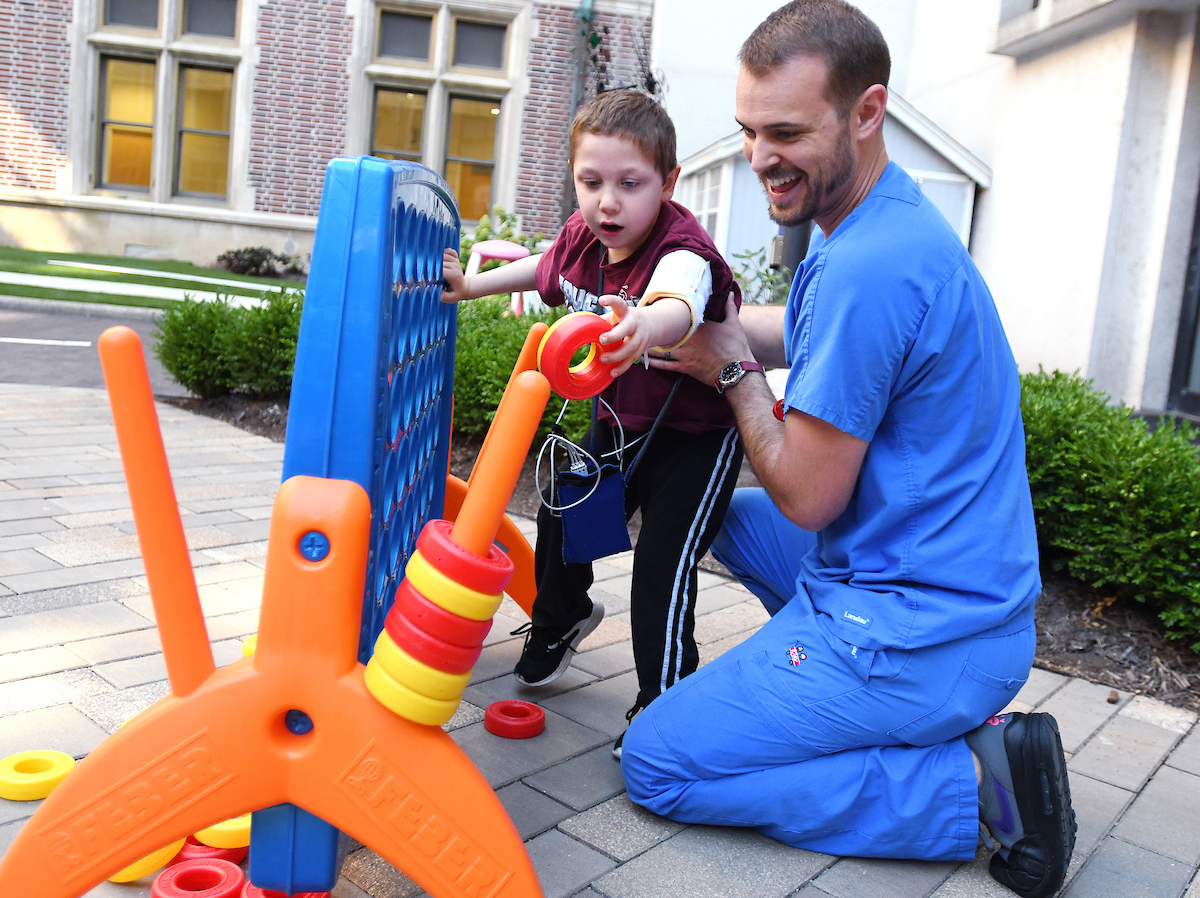 Sammy doesn’t know he’s in therapy. For him, it’s playtime and that’s just fine with Copeland, who encourages him to dump out game pieces, then pick them up, alternating between sitting and standing.

High fives all around.

As far as Sammy is concerned though, he is playing a giant game of Connect Four, tossing bean bags into a hole and playing peek-a-boo inside a playhouse.

Every activity, every movement is closely watched and supported by Copeland to help his young patient become stronger.

Observing Copeland as he cajoles Sammy into picking up his game pieces is Crystal Gomez, a third-year clinical physical therapy student from Northwestern University. This was her second day of a 13-week rotation at Riley. She’s learning not just technique as she shadows Copeland, but also how to relate to children.

“What strikes me about Jake is that with every kid, he instantly brings a smile to their face. They’re so excited to see him,” she said. “I know what he’s working on, but with all the kids it just looks like they’re having fun. He’s very creative in the interventions he chooses for the kids.”

Kids like Sammy remind Copeland why he does this kind of work.

“I appreciate their innocence,” he said. “They want to be active and are less likely to get bogged down and depressed. To see the drive to get through what they’re going through, it’s kind of amazing.”

Copeland, who has a 2-year-old daughter with his wife, Katie, earned his undergrad degree from Purdue University and his graduate degree in physical therapy from the University of Indianapolis. He loves exploring his Downtown neighborhood and other places in the city with his family when he’s not working 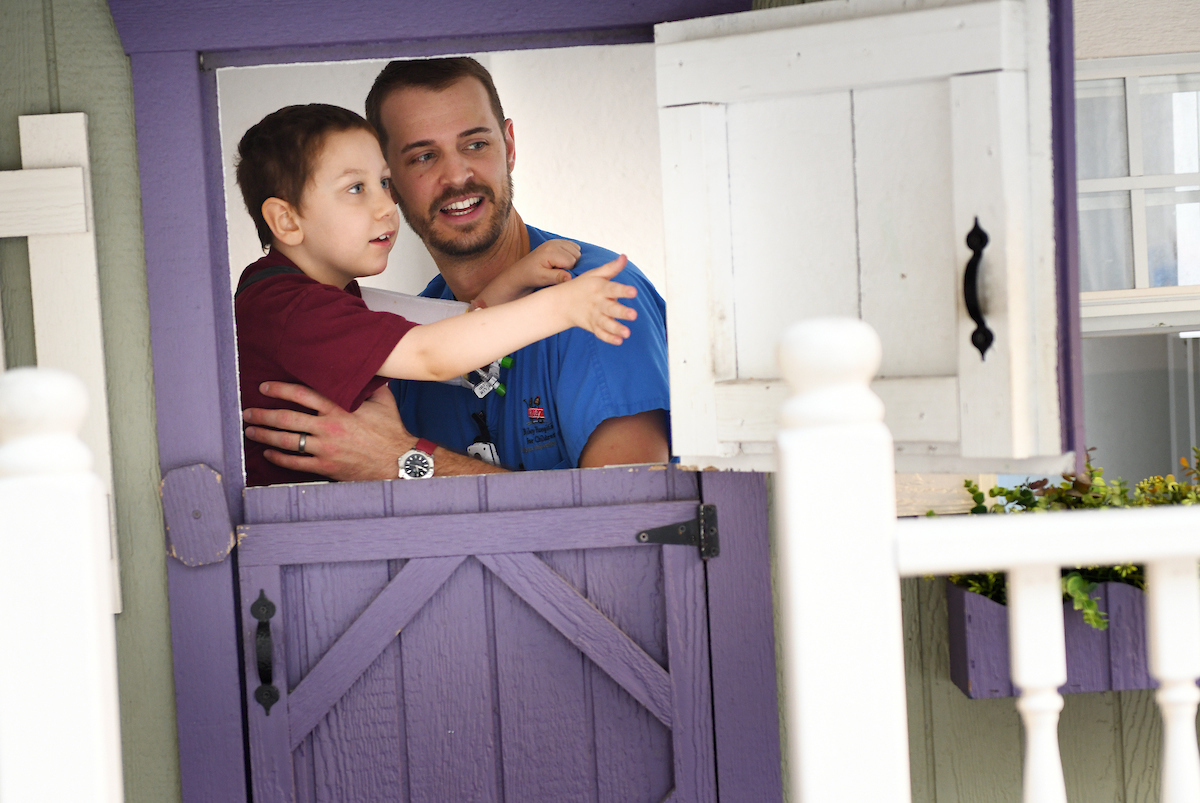 He’s also a huge sports fan – don’t ask him about Andrew Luck’s recent retirement – and loves muscle cars. He has a 2016 Chevy SS that he can talk about for hours.

It’s the kind of thing he can talk about with some of his older patients.

He learns from them too, because Riley can be a tough place to work.

“One thing you learn from most of your patients is the resolve they have,” he said.

“My favorite patients tend to be the ones that I’ll find in a dark place when they’re about ready to give up on themselves – that challenge is what excites me.

“You know in there somewhere is that resolve and you just have to figure out how to tap into it, get them back to believing in themselves.”