Respiratory therapist David Westenkirchner’s job is one of the most crucial and amazing inside Riley. He trains families on how to take their children home on ventilators.

David Westenkirchner is used to the questions. He’s gotten them his entire life.

Did you play basketball? No. (He’s a competitive power lifter)

Can you make it through the doorways? Yes.

Are you the tallest person in the hospital? No. (There’s a 6-10 painter)

Inside Riley Hospital for Children at IU Health, Westenkirchner is known as the “tall RT” guy. That’s short for tall respiratory therapist.

And the questions? Well, he’s happy to answer all those about his height.

But, more importantly, he’s ready to answer some of the most crucial questions inside the hospital: How to take a child home on life support.

Westenkirchner, who came to Riley nearly 10 years ago as an RT, soon discovered what he liked most was ventilator management and the high acuity patient population. 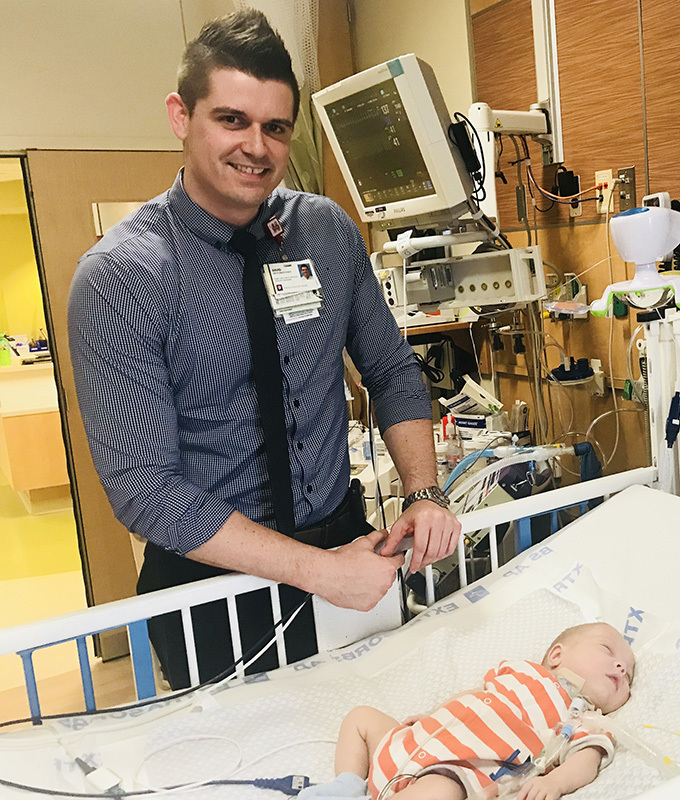 He found a passion for training and teaching families how to take their children home with ventilators. That’s now his focus full time as a respiratory therapy clinical specialist.

Westenkirchner’s presence is huge, but he is a calm, funny, caring spirit.

“If we didn’t have David, these kids would not get home,” says Kathy Shields, a nurse in the pediatric ICU, who also works in the home ventilator unit. “He does such a great job teaching them and making sure they are understanding their vents. And the families just love him.”

Riley’s In His Blood

Westenkirchner was born in Memphis in 1984, but was raised in Zionsville. His family moved to Indiana when he was a young boy for his father’s job.

That job? His dad was a physician at Riley and worked for 25 years as a pulmonologist in the PICU. His mom was a nurse.

Medical care was in his blood. But Westenkirchner, one of three boys, didn’t immediately go for the field. At Indiana University in Bloomington, he was unsure of a major.

His junior year, his dad suggested something in the allied health field, maybe a radiologist or a respiratory therapist.

Westenkirchner thought RT sounded interesting and, after shadowing at Riley, he was hooked.

He applied to get his IU degree in Indianapolis at IUPUI and, before graduating, did an internship at Riley. When he graduated in 2009, he came full time to the hospital, working nights in the PICU.

Four years ago, Westenkirchner moved to his current job – giving families the incredible gift of taking their children home.

It often isn’t easy. When Westenkirchner first meets parents, they are scared, nervous and a bit overwhelmed.

“They see the vent as this intimidating piece of equipment, a box with lights, numbers, sounds, and all these tubes and wires,” he says. “I tell them, ‘Look, it’s my job to make you guys as comfortable with this equipment as I am.’”

Westenkirchner goes at the pace they need. He explains things as many times as they want. And he answers questions.

On average, 30 to 35 children go home each year from Riley with a ventilator. Westenkirchner has helped send more than 100 children home.

He loves being such a big part of helping families get to leave the hospital. He loves giving them the freedom – finally – to go home or to the museum or the pool or the zoo with their children.

“It’s hard not to be emotionally attached to these families,” he says.

But the best part of his job, Westenkirchner says, is when his teaching is no longer needed.

“My favorite part of all of this is when I get to make that phone call to them -- after they’ve had the sleep study and it confirms they no longer need a ventilator,” he says. “Those are usually teary-eyed, emotional phone calls.”