When her grandson was a patient at Riley Hospital, one woman experienced first-hand a hospital stay during the holidays. Now, she’s brightening things up for other patients.

Her husband’s name is Tom and her name is Jerry. So they take in stride references to the Hanna-Barbera animated series about a rivalry between a cat named “Tom” and a mouse named “Jerry.”

On most days Jerry Adams hears a special name “grandma.” Between her son and two daughters, she has 12 grandchildren ranging in age from three to 13. After working in the world of retail since the age or 15, she retired and helps take care of those beloved grandchildren. 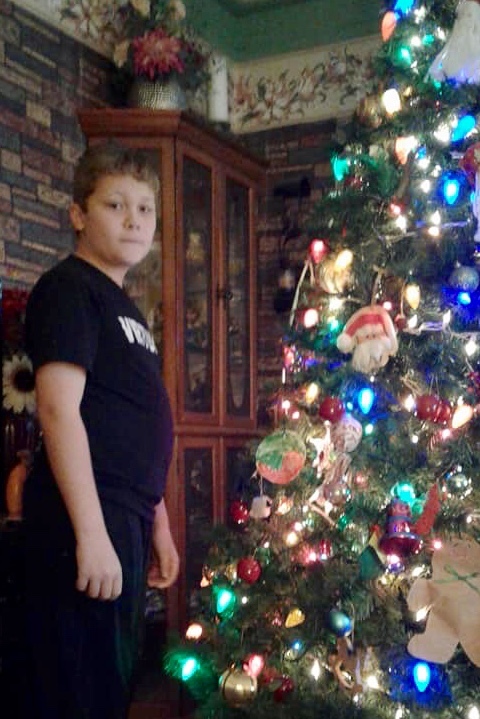 A few years ago when her grandson Taylor Dennis, became a patient at Riley Hospital for Children Adams saw the hospital during the Christmas season. She began to think about how she could brighten the holidays for other patients.

“Taylor had surgery and almost had to spend Christmas in the hospital. We walked the halls and saw all the kids trying to be so brave,” said Adams. Taylor came home Christmas Eve and the family hurried to put up a Christmas tree and wrap gifts. But Adams couldn’t stop thinking about the other patients.

“I don’t think people understand what these kids go through. Our situation wasn’t nearly as bad as so many of the others. Some are there for so long that moms have beds with matching bedspreads. It’s their home away from home,” said Adams. Taylor, a sixth grader continues to go back to Riley for check ups but is an active 11-year-old who enjoys playing football, basketball, and baseball.

And together with his grandma and mom, Karen Dennis, Taylor makes a special three-hour trip from his home in Fremont, Ind. to Riley Hospital every December. Their car is loaded with stockings for the other children.

Years spent working in retail paid off for Jerry Adams. She begins bargain shopping the day after Christmas and continues up until the day of the delivery. Each stocking is filled with everything from activities like coloring books to necessities like lip balm.

Eight plastic totes in Adams’ basement serve as storage for stockings and all the items to fill them to the top – crafts, games, hand-written cards – whatever she can find on sale.

“Sometimes I think it’s just a little thing and I wish I could do more. But then I think if everyone just did a little thing, how much brighter would it make the holidays?” said Adams. “The first year we made the delivery I fell in love with the project and I look forward to it every year. I guess it’s a grandma thing.”