Gosho And His Incredibly Perfect Adoption

Gosho Kelly spent the first years of his life sitting in an orphanage in Bulgaria, with spinal muscular atrophy. Then along came the parents that would give him a family. His mom, Katrina, an Indianapolis attorney, and his dad, Russel, adopted Gosho specifically because of his condition. Katrina has SMA, too. Together, with his parents and the care at Riley, Gosho is making tremendous strides.

His twinkling eyes and sweet smile are infectious. The joy in his face aglow.

And yet, here he is at Riley Hospital for Children at IU Health doing all of that. He is seeing specialists, getting physical therapy and making tremendous strides.

Gosho has spinal muscular atrophy, a genetic disease that affects the part of the nervous system that controls voluntary muscle movement. 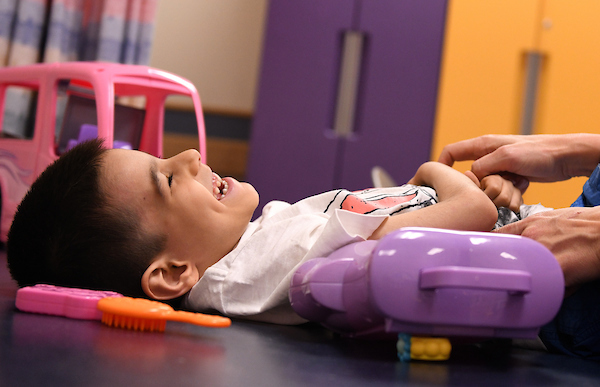 Inside Riley, he is giggling and squealing. Gosho now has a family, with parents who adore him. He has a story that is almost too beautiful to believe.

A story of an incredibly perfect adoption.

Katrina Kelly and her husband, Russel, decided it was time -- time to start a family. They started looking at international adoptions.

On a website, they found a listing of children available throughout the world. In Bulgaria, they came across a little boy who was described as very helpful to his friends.

When Katrina looked further, she saw that this little boy had spinal muscular atrophy. 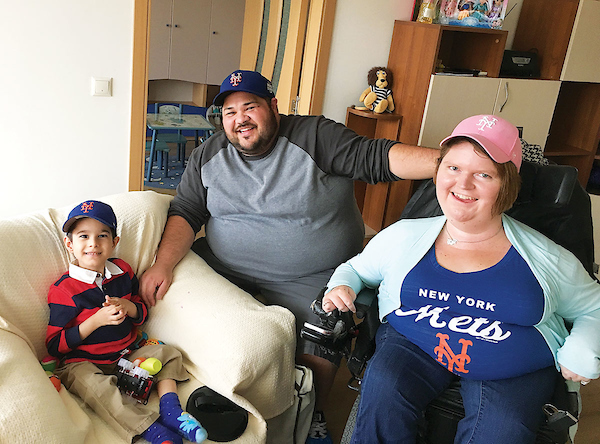 “It just kind of felt meant to be at that point,” says Katrina.

Meant to be because Katrina also has SMA. A business litigation attorney in downtown Indianapolis, she uses a wheelchair with extremely limited movement of her body.

Bulgaria was open to allowing parents with disabilities to adopt more than some other countries. And the answer to the Kellys adopting Gosho was yes. Less than five months ago, Gosho came home to Indianapolis.

“He looked so small. He looked so tiny, but it was just incredible to see the person you’ve been looking at the pictures of for a year,” says Katrina, who as a child was also treated at Riley. “You almost can’t believe it’s really real.”

Gosho quickly adapted to life with the Kellys. He embraced life in America. He spoke virtually no English when he came to Indianapolis and, within months, was putting sentences together.

“He is the happiest kid,” says Russel. “He’s the greatest kid in the world.”

Part of Gosho’s comfort may be the bond he has with his mom. After all, he sees her with much of the same equipment he has. 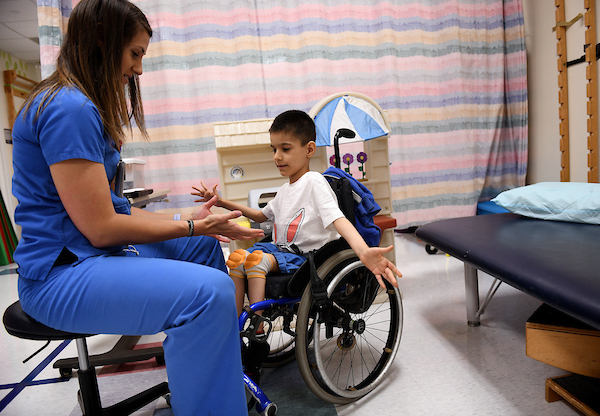 “He knows mommy has a wheelchair just like he does,” Katrina says. “I think that is interesting and cool for him.”

But it’s possible that Gosho might one day not need that wheelchair. There are new drugs he is expected to start soon to improve movement. There is the therapy he gets at Riley.

And Gosho is tough, no matter how hard it is some days, and determined to do his absolute best.

His legs are weak and his muscles shortened from sitting so much the first years of his life.

As Johnson works on range of movement with Gosho, she talks about her short-term goal of wanting to give him a way to move. 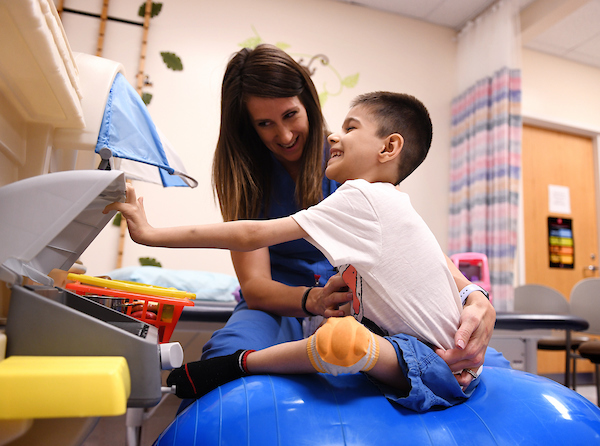 “I like Sarah because she helps make food,” Gosho says. “Soup.”

Together Johnson and Gosho concoct soup on the play kitchen set. His joy, even in that little act of play, is infectious. He clearly loves life.

At church, he loves to shake hands with people and say hi to everybody, Russel says. At home, he likes playing with cars and his new train set, Katrina says.

They read books every night. “If You Give A Mouse A Cookie” is his favorite at the moment.

And as a family, they just enjoy hanging out. After all, they are still getting to know each other.

But in many ways, Katrina feels like she already knows her son inside and out. She knows the struggles he faces each day. They are her own struggles. She knows the trials that are yet to come.

“Ultimately, what I’m going to teach him is to be strong,” she says. “To be strong and and not let the hard times bother him.”