From strangers to sisters: Riley NICU moms support each other

Their babies brought them together, now they share a lifelong bond

If not for the miracle of their babies, the three women likely would never have met. But fate had other plans.

Dashana Sebree, Deanna Adams-Robinson and Casey Froschauer all found themselves in Riley Hospital for Children’s NICU this month, their newborns each requiring life-giving care after birth.

The young mothers met in the family lounge outside the unit, each trying to grab a minute’s rest from the long days and nights spent at their baby’s bedside.

Thrown together by circumstance, the women decided to make the best of a difficult time. They’ve cried together and laughed together. They’ve shared videos of their babies. They’ve even made T-shirts marking their bond as NICU moms.

“It’s hard for all three of us,” Sebree said. “It’s an up-and-down battle, a roller coaster.”

All the more reason for sharing the journey with someone who understands.

Meredith Murray, a child life specialist in the NICU, said the women have made a valuable connection.

“That bond is really special and needed here on the NICU,” she said. “Building that relationship so they can bring one another up on hard days and celebrate the little victories is really important and special.”

The women came down to the tree-trimming party in the Simon Family Tower lobby last week – a chance to get off the floor and soak up a little holiday spirit. They came to pick up an ornament kit and take it back up to their rooms, so they’d have something to do later.

“I heard about the party and said, ‘Let’s go.’ It’s good to get off the unit,” Adams-Robinson said. Her little girl, Kailey, is 2 months old; she was born just shy of 27 weeks, along with her twin sister, who did not survive.

Adams-Robinson and her husband, Eric Robinson, have two other daughters at home, ages 7 and 13. Adams-Robinson spent her first weekend away from the hospital recently for her older daughter’s birthday.

“It was hard being away from Kailey, but my big girls need me too.” 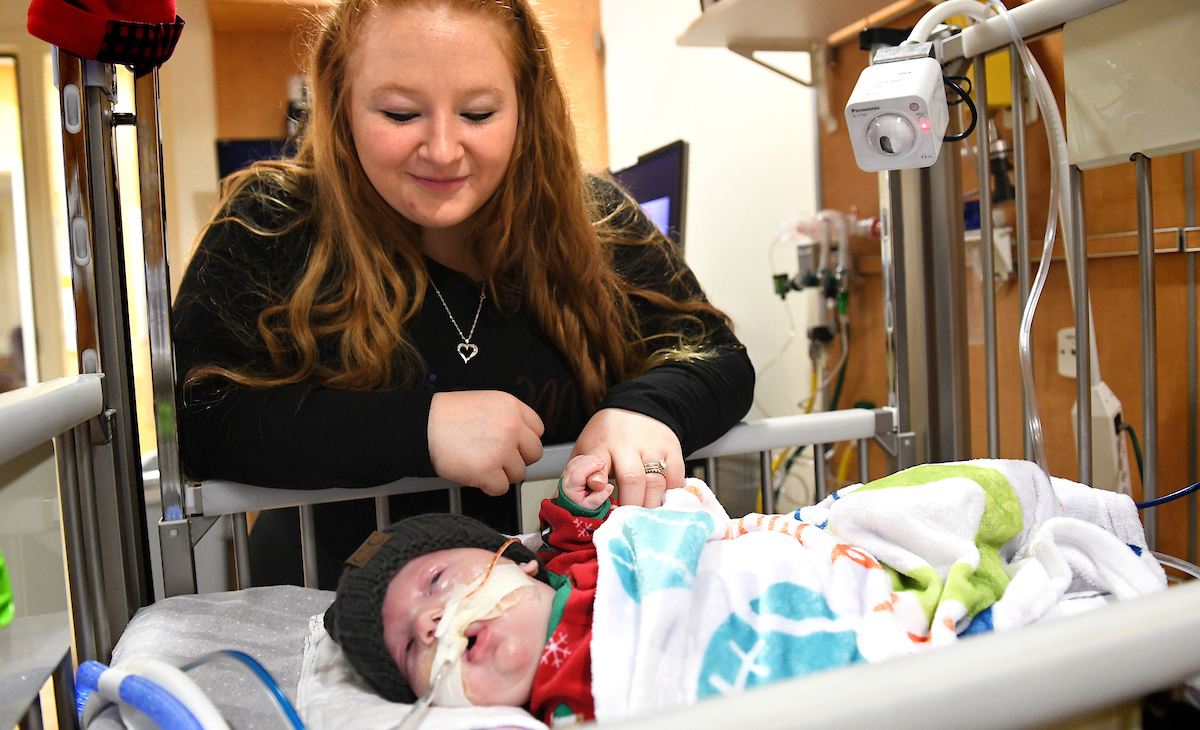 Froschauer said the other NICU moms dragged her down to the party, but she was glad for the chance to laugh and share pictures of her and husband Cody’s 6-week-old son, Zander. He was a full-term baby but suffered brain damage. For now, she said, he functions like a typical newborn, clutching her finger and waving his little arms. And she treasures every smile, every cry.

Each mom's situation is different, but the love they have for their child is unwavering. Each understands this about the other.

All of the women also have two older children at home, so they know the pull of life outside the hospital, but for now, the primary focus for each is their NICU baby.

At 3 months, Sebree and fiancé Jay Johnson’s son, Jamier, is the oldest of the three babies. He was delivered at 33 weeks after suffering renal failure in the womb. Jamier weighs nearly 11 pounds now and is undergoing dialysis.

Sebree calls him her miracle baby.

“They said he wouldn’t make it to a month, and here he is,” she said. Jamier was decked out in a Christmas outfit, perfect for seeing Santa. The bearded guy in the red suit stopped in to see each of the NICU babies last week, delivering music boxes to all.

Also visiting Jamier last week was Dr. Paulomi Chaudhry, who has been following his progress.

“I knew Jamier when he was still cooking in mama,” she said. “It’s been a long road so far, and we’ve still got a bit of a journey for him, but we’re happy he’s where he is at this point. And we’re happy that his story has continued beyond where we thought it might be.”

Taking a peek in his bed, she says, “You look fabulous in your Christmas jammies, and oh, those socks!”

Chaudhry said the moms’ bond during this difficult time is healthy.

“It becomes a family here. And our families are a fabulous support for each other,” she said.

Sebree, whose son’s room is decorated with touches from home, said her faith won’t allow her to give in to sadness, even during the holidays. “We’ll be here for Christmas, but this is my second home now.”

As long as her son fights, she said, “I’m gonna fight with him.”

She shares that same spirit with her new friends. “I try to keep them encouraged, uplifted.”

One way she does that is through the T-shirts they all wear; another is the tattoos they got, each with their youngest child’s name.

It’s a bond they’ll share forever. From strangers to sisters.