From Riley patient to white coat

Braeden Estes is familiar with the world of medicine. He was once a cancer patient at Riley Hospital for Children at IU Health. Now he’s working his way through medical school.

There are two photos that paint a picture of Braeden Estes’ journey through IU Health. The first one is of a crowd of friends and family members gathered in the lobby of Riley Hospital. It was taken in October 2011. The second photo was taken last August. Estes is wearing a broad smile and a white coat with the words “IU School of Medicine” stitched above the left pocket.

It was June 22, 2011 when Estes heard the diagnosis – “Ewing’s sarcoma.” Friends and family members rallied around him at Riley Hospital.  The son of Michelle and Bill Estes, and older brother to Gabe Estes, Braeden played soccer for Mount Vernon High School. He initially thought the bump on his thigh was a sports injury.

It was the summer before his junior year and “Bray Strong” was about to learn how to slay a giant.

Ewing’s sarcoma is a rare cancerous tumor that grows in the bones and around soft tissues around the bones. It typically affects people between the ages of 10 and 20. Estes was 16.

“I was kneed in the side of my thigh during a game so I just thought that was it but after a few weeks of rest there was no improvement,” said Estes. His diagnosis was confirmed by his family physician.

For the next year, he was under the care of Riley Hospital oncologist Dr. Kenneth Lazarus and received chemotherapy every two weeks. “Dr. Lazarus helped me tremendously throughout my treatment. He is truly one of the most compassionate and caring individuals I have ever met. He was very helpful to me and my family through a difficult time,” said Estes, 24.

“The surgery was performed to remove the tumor and replace it with a bone graft/rod, so that I could walk going forward and to replace the bone that the tumor invaded,” said Estes. “Doctor Wurtz played a major role in my treatment. Thanks to the surgery and treatment, I am now able to perform nearly all of my normal daily activities. While initially I thought permanent disability was a foregone conclusion, the efforts of my surgeon and the entire treatment team gave me the mobility and independence I assumed would be lost.”

As another part of his treatment, Estes spent nearly a month in Riley Hospital due to a drop in his white blood cell count, resulting in sepsis. 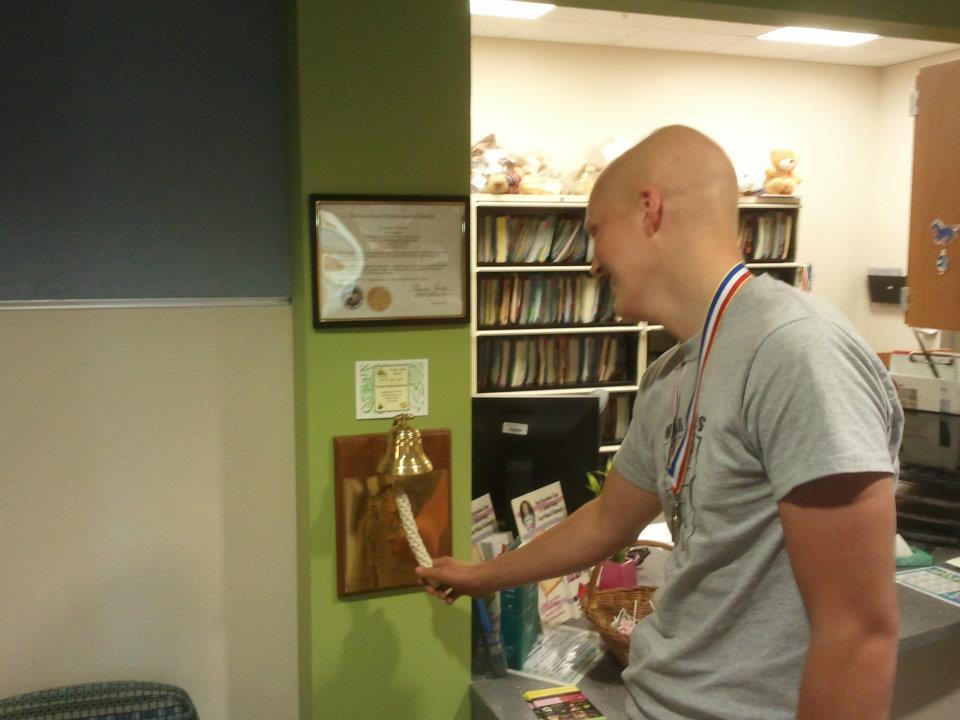 “I was very close to losing my life and spent several weeks in the ICU. During that time, the staff at Riley, my family, and my friends helped me through one of the most difficult challenges in my life,” said Estes. “The time I spent recovering from this taught me the importance of perseverance through adversity and molded me into who I am today.”

He completed treatments in June of 2012 and graduated from Mount Vernon High School a year later. After completing an undergraduate degree in biology from IU Bloomington he applied to and was accepted to IU School of Medicine with plans to graduate in May of 2020.

“As of right now, I’m interested in orthopedic surgery,” said Estes. “My time at Riley Hospital had a profound impact on my career decision. Going through the treatment at Riley, I gained a first-hand experience into the fascinating capabilities of medicine. As a future physician, the opportunity to pay it forward and help patients who are suffering from diseases would be satisfying. I am doing fantastic and feel fortunate to be where I am today.