Four legs, one wrinkled mug and hundreds of fans

Gus, a 130-pound Bullmastiff, is the ultimate cuddler and a welcome distraction for kids, families and team members at Riley.

Gus is used to the attention – he doesn’t get excited. That’s not in his nature. Gus is a 130-pound Bullmastiff, a breed created by crossing the English Mastiff with the Old English Bulldog. 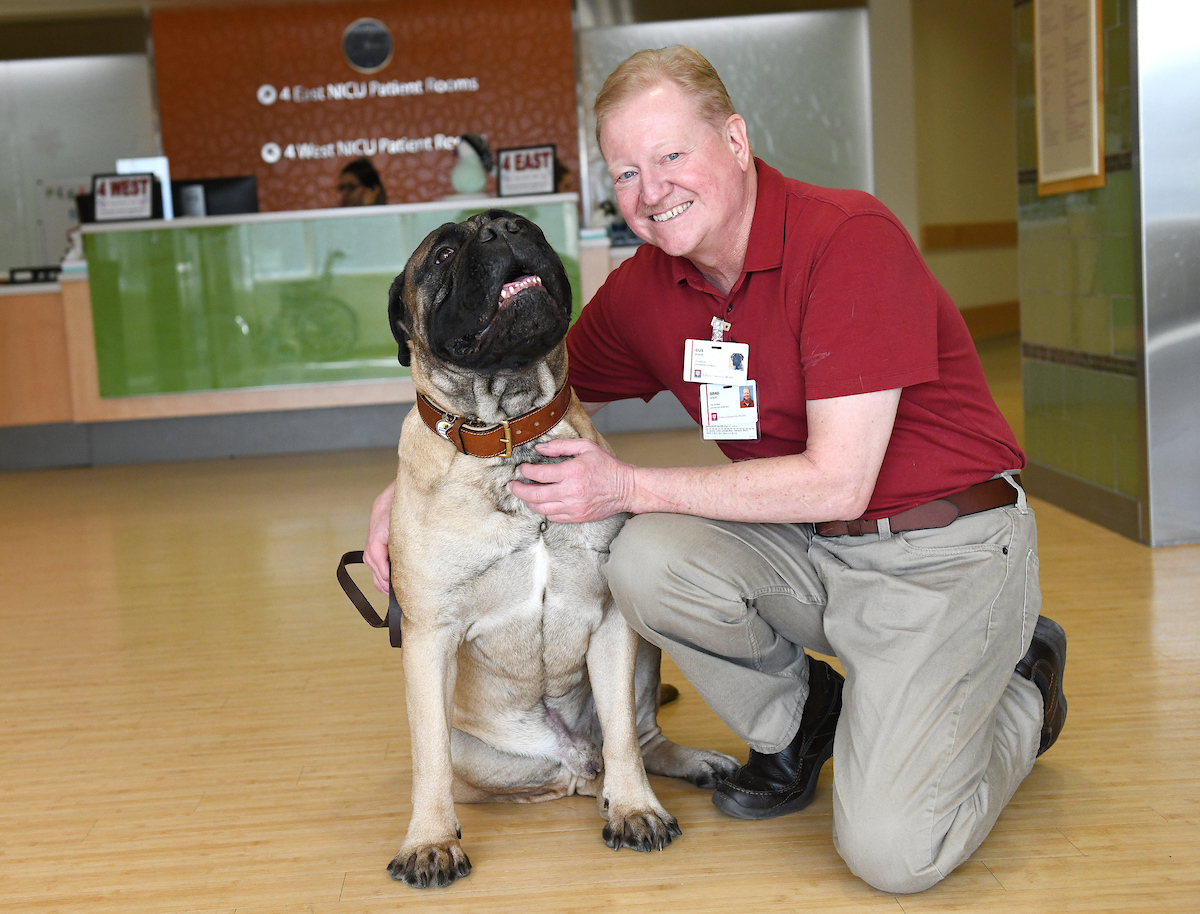 He is a new addition to the Riley Hospital for Children pet therapy team, visiting patients and staff every Tuesday with his human, Brad Hoop.

Hoop, a cancer survivor who was treated at IU Health Simon Cancer Center, met his first therapy dog while he was waiting to get blood work done at IU Health North Hospital. It was love at first sight for Hoop, especially because he has a fear of needles.

The dog helped him forget that he was about to get lab tests done that day, and it inspired him to want to help others forget about their medical issues for a bit.

“I told myself when I get through this, that’s what I want to do, I want to have a therapy dog and be with patients.”

Hoop, 52, grew up with dogs, so it seemed a natural fit to fill his time after treatment for a rare form of testicular cancer. He had run a construction company for nearly two decades but has been on disability for the past few years after developing fibrosis in his lungs from chemo.

The cancer has given him the gift of time with his family and with 4-year-old Gus, he said. Hoop and his wife, Jennifer, are celebrating their 30th wedding anniversary this year, and they have two daughters.

After training with Paws & Think’s pet therapy program in Indianapolis – which included Gus learning to maneuver around a minefield of crutches, wheelchairs, toys and dropped food – man and dog were cleared to start volunteering at Riley last fall.

Now it’s not clear who enjoys it more. 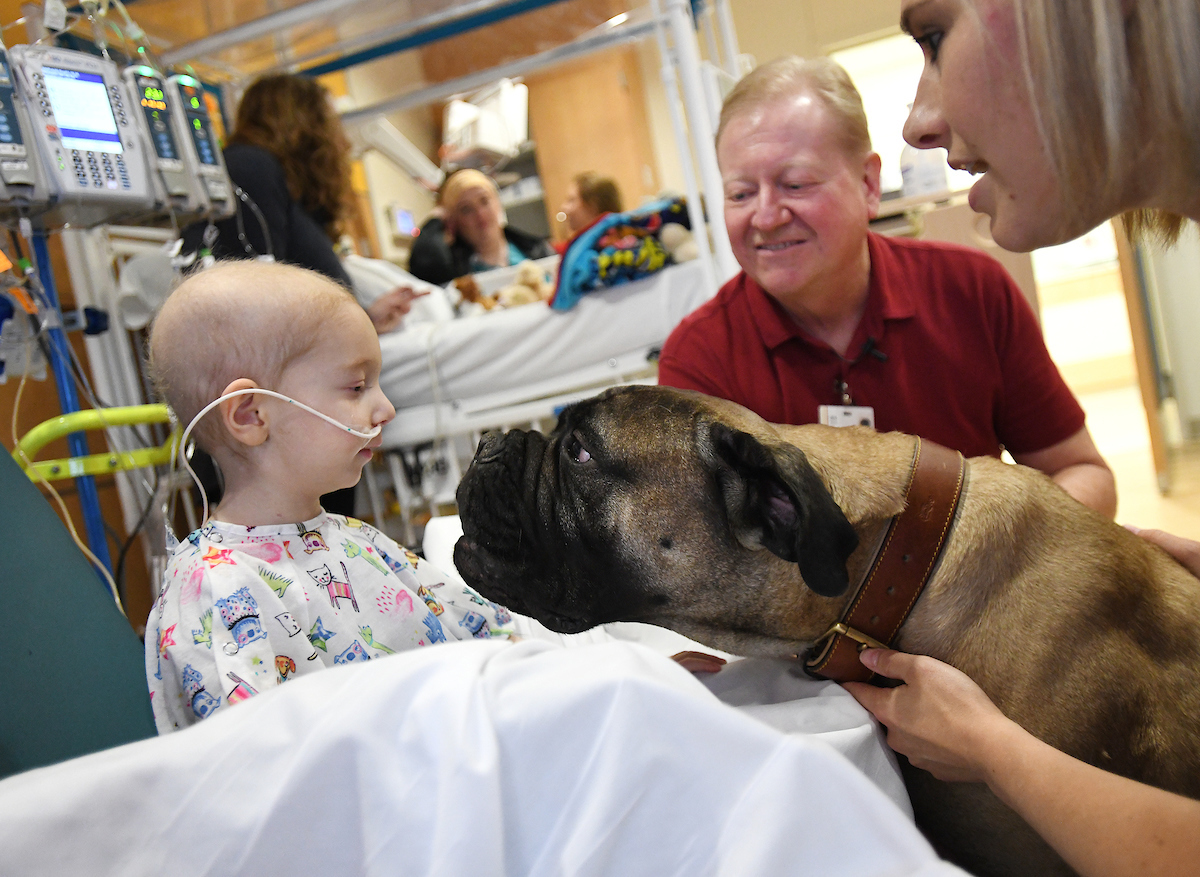 Not just with the kids, but with the team on the front lines of the fight, he said.

“When you’re going through chemo, the staff becomes your family. You get really close to them. They have bad days like all of us, but they never show it. They’re always caring and comforting.”

He can’t bring Gus over to Simon Cancer Center to show his appreciation, but he’s paying it forward at Riley.

“He knows what kids are going through, especially in this wing. It’s a very special connection,” she said.

Meanwhile, Gus laps up the attention of adoring kids and grownups, whether he’s working in oncology, neuro or even stopping in the NICU to give parents and team members a mental health break in the middle of the day.

Before he and Hoop enter a patient’s room, Ziegler speaks to the child and others in the room to determine first if they want Gus to come in, and second if they prefer him to stay on the floor or to put his front paws on the bed or chair. She puts a clean sheet down on the bed or chair before allowing Gus or any therapy dog to interact with a patient.

Per hospital protocol, each child has his or her hands sanitized before and after petting the dog, as does everyone who enters and exits the room.

“He loves to be loved,” Ziegler tells the children. When Gus inches closer, she says, “The way he says hi is he sniffs.” 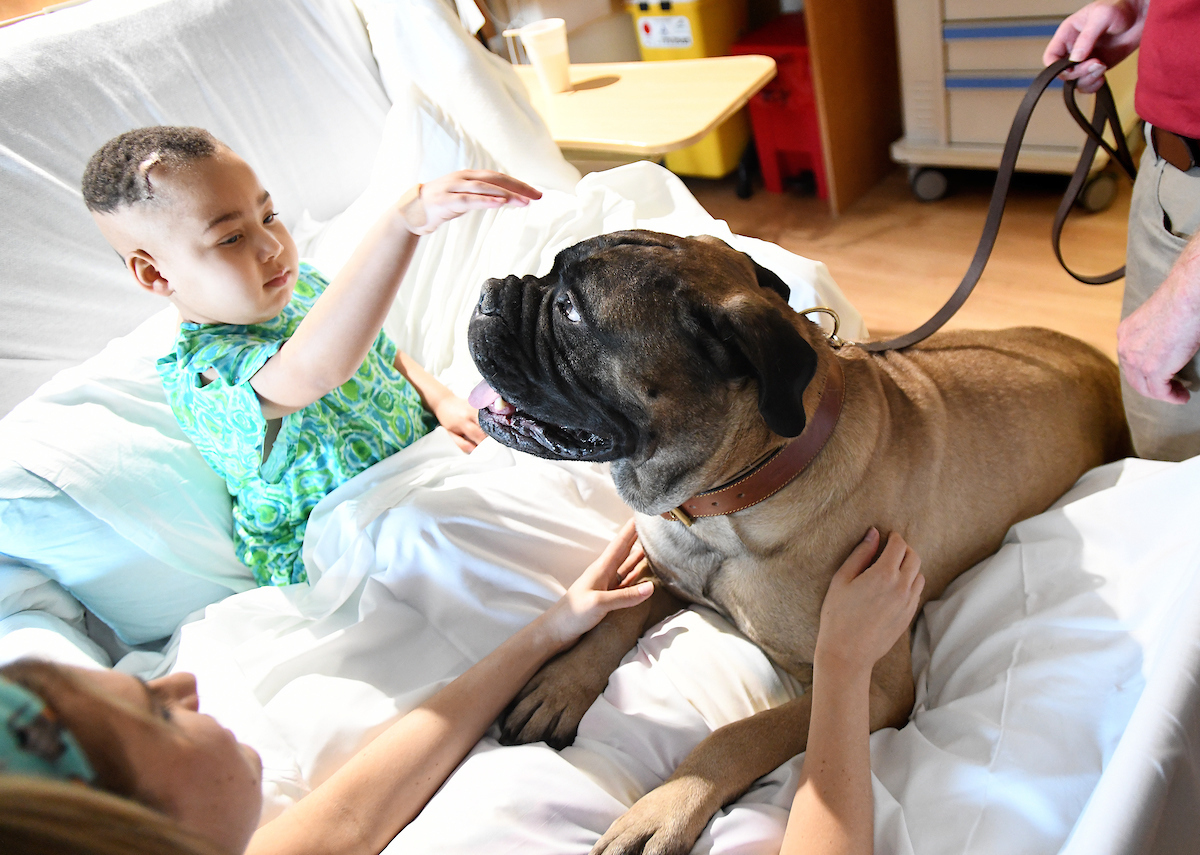 They stay for a few minutes, answering questions and giving out Gus’ card. That’s right, Gus has a business card, featuring his wrinkled, tender mug on the front and his birthday and breed on the back, along with his favorite things to do: sleeping, eating and cuddling.

“He’s so laid back, and he loves kids,” Hoop tells everyone he meets. Gus, in particular, is “real low-energy,” Hoop says. “He and I get along great because we don’t like walks and we love naps.”

When Gus stops in Charlie Nussbaum’s room, the 7-year-old lights up as his mom, Emily, watches. Her son climbs out of bed to get closer to Gus, stroking his head and giving him a quiet kiss.

“It just makes Charlie so happy to see Gus,” she said. “This is the highlight of your week, isn’t it, Charlie?”

The boy, who is wearing a hat that looks like a pug, is hardly listening as he nestles his head in Gus’ neck, then wraps his arms around the dog. He’s missing his own dog at home and holds on to Gus as if to keep him right there.

“You can borrow Gus anytime,” Hoop tells him.

“Whatever he wanted at this point I think I’d give it to him,” Emily Nussbaum replies, eager to give her son comfort and strength as he continues his cancer fight. “These two have bonded.”

“You can’t feel sorry for yourself when you leave here. Everybody ought to spend time volunteering here. I love it.”