For Riley recovery nurse: ‘They’re all my kids’

She’s been clobbered by a toddler and head-bashed by a baby, but Mari Saucedo says this is where she’s meant to be.

“I’m a mom, and it’s scary to see them sick,” she explained in the simplest terms possible. “It’s like a different (heart) string that they pull.”

But when she interviewed for a nursing position in the pre-op and recovery area at Riley Hospital for Children, she knew she had found the place for her.

“I just knew in my heart that this is where I was called to be.” 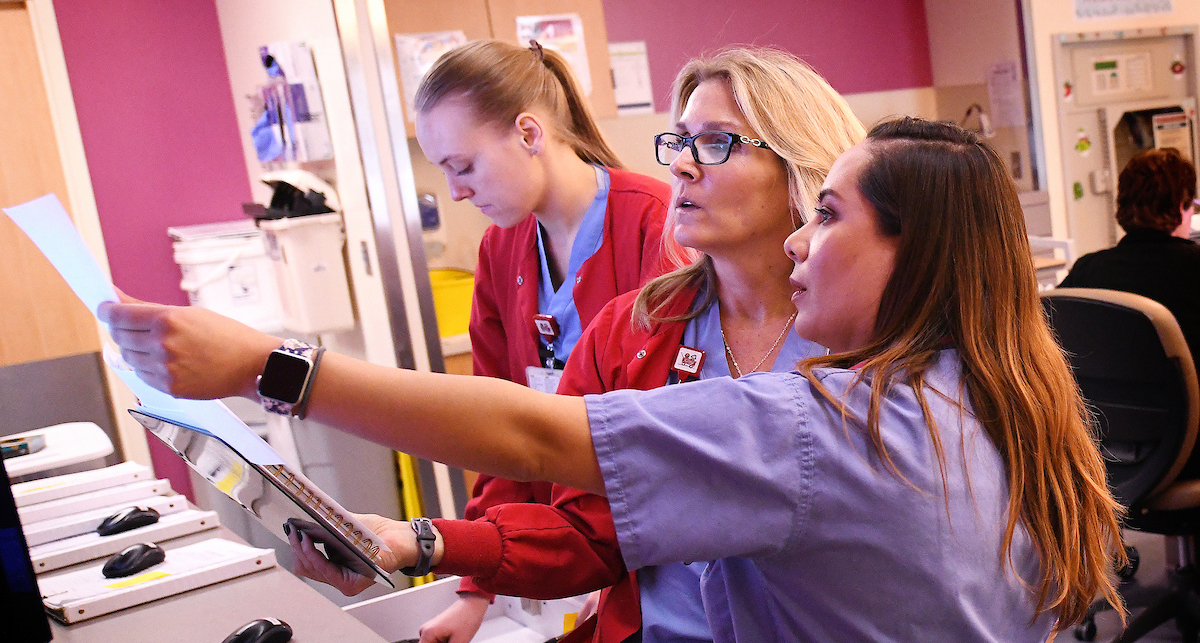 Saucedo, mother of a 12-year-old girl, is a native of Chicago, where she grew up speaking Spanish as her first language. She has a heart for the Hispanic population and hopes to one day be able to serve them more fully as a nurse practitioner.

In the pre-op and recovery area, she works with families before and after surgery, helping parents and children prepare for the unknown – explaining procedures, answering questions and calming nerves.

With her ready smile and good humor, she’s a natural for the job. Saucedo puts everyone she meets at ease, even in the sometimes scary setting of a hospital. To her, everyone is a friend. 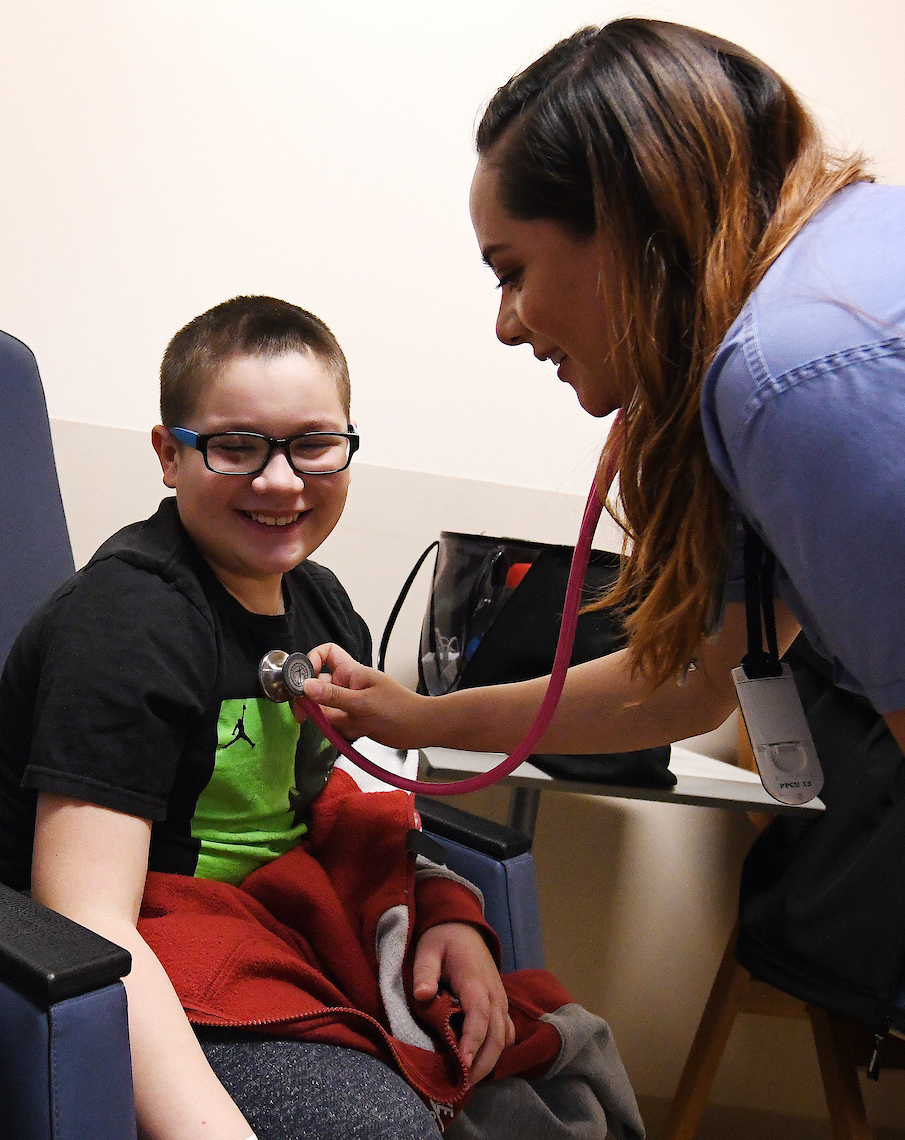 One of the friends she’s just met is a boy named Caleb and his mom, Kara. Caleb, 11, is at Riley for an outpatient surgery that’s expected to take less than an hour. Still, he’s nervous, his skeptical eyes taking in everything going on in the small waiting room where he and his mom will meet with Saucedo, as well as an anesthesiologist, nurse practitioner, surgeon and child life specialist.

The goal is to make everyone as comfortable as possible before the surgery, explaining every step in the process.

By the time, Saucedo finishes her questions, checks Caleb’s vitals and attaches his ID wristband, the boy is smiling, joking and relaxed in the chair. “I’m gonna wear this for the rest of my life,” he declares.

That’s her gift. She coaxes smiles and laughs out of even the toughest patients and their parents.

“It’s rewarding to be able to talk to someone and calm their fears,” she said.

“I trust them,” she said of the Riley team. “His brothers both had surgeries here. They both went really well, and the recovery went really well. We’ve never had a bad experience with anybody during the process.”

That kind of trust is earned over time, but Saucedo has just 30 minutes to talk with families when they come in for surgery.

“I don’t want to rush the process. We only have 30 minutes to bond.”

Still, it’s enough for her to make an impact.

She received a Christmas card in the mail from the family of a little boy she saw in pre-op last year. She remembered that he was grumpy. So grumpy, she said.

Determined to make him smile, she went over to the cabinet where they keep a ready supply of toys for patients and dug out a little basketball for him. That did the trick. And he remembered that gesture, months later.

In the card, the little boy had written her a note to say thanks for the basketball. “I almost play with it every day,” he wrote. “P.S. God bless you.”

“That just made me cry,” Saucedo said. “I might not be with them for a long time, but it’s nice to know I made an impact.”

Another patient she remembers was a child whose mom came to the United States to seek treatment for her. They spoke no English, so Saucedo was their interpreter, a role she particularly enjoys in her job.

“Sometimes families don’t understand the whole picture, the complications, especially people from my culture. They don’t speak English, they don’t understand. That’s where I come in. I interpret and make sure they understand everything.”

The young girl and her mom returned to Riley on Valentine’s Day, bringing Saucedo a teddy bear as a token of thanks.

“Things like that reassure me that I’m where God has called me to be. When it gets hard, I just think about those moments.”

Most days, Saucedo works either pre-op or recovery, not both. But this day, she will follow Caleb from pre-op through to his recovery later in the day. She understands not just his anxiety, but his mom’s.

“I know how scared parents are to send their kid off to surgery, but I tell them that in recovery, they’re my kid until you come to the bedside. They’re all my kids.”

In other words, she will care for them like her own.

When Caleb is wheeled into recovery after surgery, she is ready to administer any pain medication he might need, but she’s also there as a reassuring voice, speaking his name, rubbing his arm, telling him he’s OK and gently bringing him out of his anesthetic fog.

She won’t call for his mom to come into the room until she has ensured that he is alert and free of pain.

“I’m looking for eye contact. When I see eyeballs, when I see that pain is controlled, then we’re good.”

She jokes that she’s been beat up by a 2-year-old in recovery and had her lip busted open by an 18-month-old’s head recently. It goes with the territory. What’s most important to her is that they recover well.

When it’s time for her to “recover” during a 10-hour shift, she heads down to the cafeteria and grabs a seat by the window. It’s her time to feed her body and her soul.

“I like to read or listen to a devotional. That’s my time with God. It helps me come back in a good mood.”