Susan Henderson-Sears and her team in Riley Hospital for Children’s NICU noticed something when they checked on parents whose children were in the intensive care unit. They were always on their phones.

“We were working on parent engagement, trying to get families here and involved in their child’s care,” said Henderson-Sears, director of the Riley NICU Family Support Program, otherwise known as the NICU Nest. “Parents were actively on mobile devices all the time when we were in their rooms, so we started discussing bringing education and support services to them through the phone.”

And that’s how NICU Companion was born. The app, available in English and Spanish and free on all smartphones, was first piloted about three years ago, but it has grown every year since. Funded by a former NICU family, the app launched with information on respiratory support, something generally all babies need in the NICU. 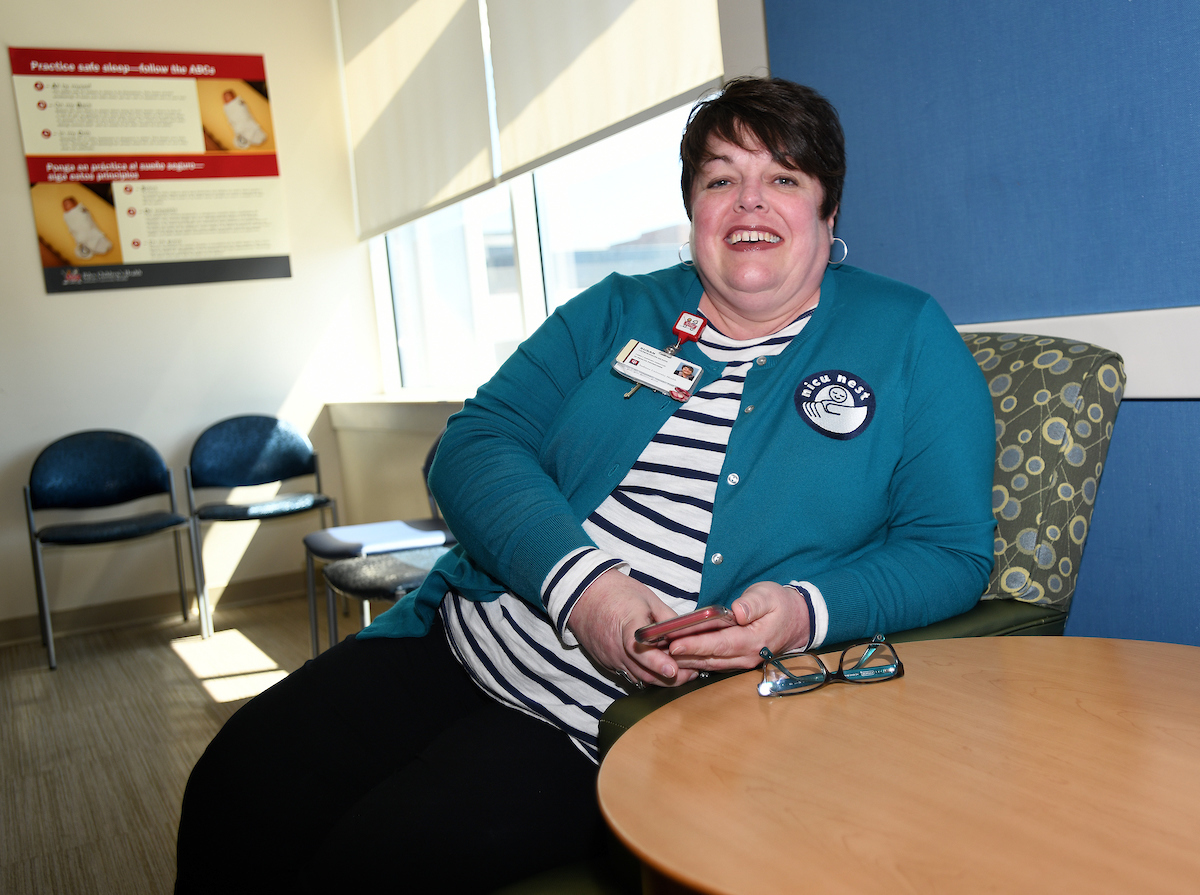 That was followed by lactation support. “We were still tracking breastfeeding and pumping with pencil and paper, and that seemed kind of archaic,” Henderson-Sears said. They added trackers for breastfeeding, diaper output and skin-to-skin to the app.

Moms can easily upload all of that information to a spreadsheet and email it to a pediatrician or a neonatologist to discuss nutrition and related issues.

“We used parent focus groups along with multidisciplinary groups to help create content and decide what would be helpful to parents.”

Now, the NICU Family Support Program is working to update the app for the third time. Team members have partnered with the team in the Riley Fetal Center to add prenatal information, especially regarding neonatal abstinence syndrome (NAS), conditions caused when a baby withdraws from drugs he or she has been exposed to in the womb before birth. The goal is to evolve into an all-encompassing NICU app, Henderson-Sears said, with plenty of extra content, including personal stories.

A section with parent stories in their own words – video and narrative – offers advice for new parents and explains what to expect in the NICU, whether it’s deciding on a tracheotomy procedure, best practices when breastfeeding or learning about the equipment that will be used to support their child.

“Hearing from other parents talking about the NICU experience helps new families understand that they’re not alone in the fear and the anxiety and the grief that they are feeling,” Henderson-Sears said.

A former NICU mom herself, she understands well the fears they have. After being put on bed rest for 16 weeks during her pregnancy, Henderson-Sears delivered triplets at 34 weeks years ago. They spent several weeks in the NICU at a south-side hospital. Those babies are now seniors in high school, all doing well.

“I am a visual learner,” she said. “I wanted to see what the equipment would look like on my babies, wanted to hear what it sounded like. On the app, you can see and hear what our ventilators look and sound like, what kind of space they take up in the room. That provides comfort as a parent to be informed.”

NICU Nest originated more than 25 years ago as a one-stop resource for education and support for families who have or may soon have a child in the NICU.

Every person on Henderson-Sears’ team has lived the experience.

“We have degrees in social services and public health, but we also have children with chronic health conditions who have had NICU stays, PICU stays,” she said. “We are still parenting under complicated circumstances as well.”

The NICU Companion app is just one way to make the journey a little easier for new parents.

“There are a ton of breastfeeding trackers and NICU apps out there,” Henderson-Sears said. “It’s just the convenience of having it all in one place and not 14 apps on your phone.”