It’s impossible to count the number of wheelchairs Tim Berglund has fixed or adjusted or put together or torn apart in his three decades at Riley. But what is known for sure: He’s put a lot of smiles on kids’ faces whose freedom depends on that set of wheels.

Inside a workshop tucked away in the halls of Riley, the makings of a hospital disappear.

And something fabulous reveals itself. Someone fabulous, too.

Tim Berglund sits in an apron with tools all around. Drawers filled with washers and nuts and bolts, pieces that – throughout his three decades -- he has realized are vital to what he does.

And what he does, Berglund’s job, is one of the most magical and magnificent inside Riley Hospital for Children at IU Health.

Berglund makes sure the wheelchairs that give kids their freedom are working and that they fit their bodies just right.

It’s a job he landed in 1987 -- after an 8-year stint working as a technician in theatres -- at a time when most wheelchairs were shiny silver, plain and manual. 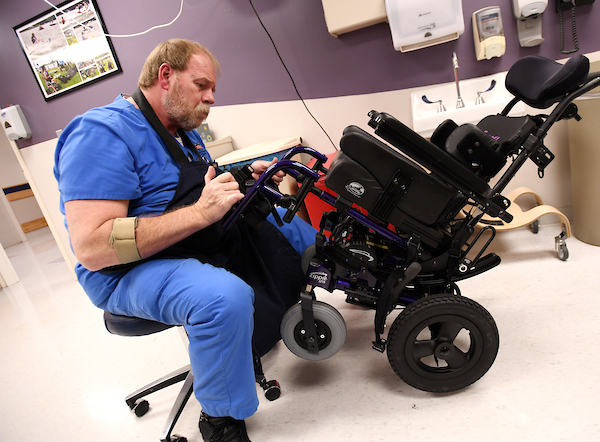 Power chairs with all sorts of mechanisms for movement – sip and puff, sonar in the headrest, joy sticks, laser pointers.

He works on chairs that are lime green, shimmery purple, cobalt blue and hot pink.

But through the years, no matter what the chair, his mission has been the same.

Customize each and every wheelchair so it fits the patient perfectly. So the wheelchair becomes an extension of them. So they feel completely comfortable.

Take the little boy Berglund helped last week. His legs were too short to get the leg rest high enough. So, Berglund took some plastic, heated it and shaped it into a leg plate that would work.

“I like the challenges,” says Berglund, whose official title is adaptive equipment technician for rehabilitation.

He likes doing anything and everything he can to help his patients.

Berglund works 7 a.m. to 5:30 p.m. four days a week. On a given day, he and his partner, Roy Vaughn, might see anywhere from two to a dozen chairs. 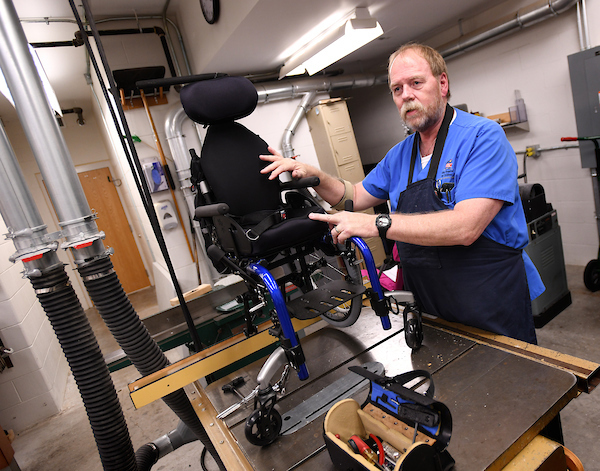 In a year, thousands of wheelchairs come through their doors, each with its own need.

Things, of course, have changed a lot in 31 years. When Berglund came to Riley in 1987, the hospital was the only one in the United States building custom seating for wheelchairs.

He would take those old wheelchairs, tear them apart and build the seating around them.

Through the years, Berglund has crafted all sorts of creations and concoctions to make wheelchairs work for his patients.

Down the hall from the workshop, there is an upholstery room with a big sewing machine. Berglund uses that to upholster seats or sew whatever comes his way.

As part of his job, Berglund also builds specialized wagons. Not the usual ones seen in Riley – but bigger, red wagons with extra space and storage for kids who might have oxygen or ventilators with them.

As he explains a trailer he built to add to the back of a wagon, for a pair of twin patients, a knock is heard at the door.

“Can you take a look at the tilt on a chair?” Berglund is asked. 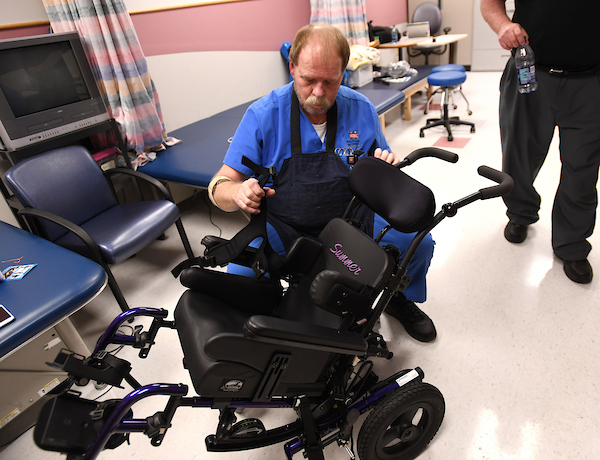 He goes into a room where Summer Tate lies on a bed. Her new wheelchair isn’t leaning back the way her mom, Sarah, wants it to.

Within minutes, Berglund has fixed the problem – and Sarah Tate is extremely grateful.

Berglund then helps get 6-year-old Summer comfortable in her chair and, as the family leaves, a sweet voice yells out.

“Thank you for fixing my sister’s wheelchair.” That is Autumn, Summer’s twin sister.

Berglund smiles. This is why he does what he does. And why it’s going to be tough to leave. But after more than three decades, Berglund plans to retire next summer.

“I will miss it. I will probably cry when I walk out of the building,” Berglund says. “But I will leave without any regrets.”

Personal: He is married to wife, Toni, and has two stepdaughters and three step-grandchildren.

Growing up: Berglund was born in Ithaca, New York, and lived all over the world as a child; his dad was in the military. The family moved to Indianapolis in 1968 when Berglund was a freshman in high school. He graduated from Lawrence Central and then went on to get a technical theater degree from the University of South Carolina.

Before Riley: He worked for small, regional theaters after graduating from college. Then, in 1978, he landed a position with the Indiana Repertory Theatre. He stayed there for seven years.

Outside of the hospital: Berglund likes to camp, kayak and fly fish. He is also a pilot and owns a farm in Pennsylvania.