Fmr. Colts’ Overton: Even With Another Team, His Heart Will Belong To Riley

After being let go from the Indianapolis Colts, the long snapper said Tuesday he’d love to nab another NFL spot. But even in another city, he won’t forget Riley.

In Matt Overton’s heart, there is football. And there is Riley Hospital for Children. Or maybe it’s the other way around. Riley and then football.

Overton adores both. And -- if he can find a way -- both will still be part of his life.

“I’m hopeful to be playing with another team,” Overton said Tuesday, one day after the Indianapolis Colts released the long snapper. “Right now, I’m definitely all on board with Riley. Forever. I’m always there to support those doctors, nurses and patients.”

Overton came to the Colts in 2012 and quickly after, he came to Riley.

“From my first visit, it became obvious why it was such a special place,” Overton said. “It is certainly a place filled with a lot of hope.”

The doctors, the nurses, the staff. They are all incredible people, Overton said. He would visit that hospital and forget about the big, glitzy world of the NFL.

“Riley made a huge impact on me,” he said. “That’s where I gained a lot of inspiration --  from these kids.”

Overton can’t name all the patients he’s grown close to. The ones he adored who passed away. The ones he met for a brief few minutes in the burn unit or ICU or rehab and never forgot.

He can tell plenty of stories of children he met at Riley, children still close to him. Mia Benge is one. She’s the first name that comes out of Overton’s mouth when asked about Riley. 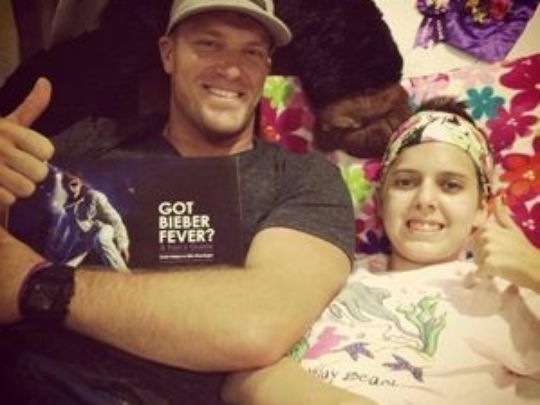 It was 2013 and Overton was taking 10 Riley patients – all girls – to a Justin Bieber concert. Mia was supposed to be one of those girls. But she was battling a brain tumor and was too sick to go.

Her sister and her best friend went in Mia’s place and, as Overton and those girls were enjoying Bieber, a phone call came from Riley. Mia had taken a turn for the worse and might not make it through the night.

“It was just one of those moments where it was just so surreal and I really couldn’t believe it was actually happening,” Overton said. “While the nine other girls were having the time of their lives, this girl that is supposed to be there is on her death bed and the future didn’t look very good.”

But Mia, with the care of Riley, pulled through. And Overton has been with her ever since, every step of the way. When she moved out of the ICU, he was there. When she went home from Riley, he was there. Her first day back at school, he was there. And not long ago, the two were on the field of Lucas Oil Stadium as Mia cheered as a junior Colts cheerleader.

“The bond I grew with her is pretty incredible,” Overton said. “She is what inspired me to help at Riley even more.”

Mia’s is a happy story. But there have been others that weren’t. The little girl Overton sat with, who was just 7 years old when she died. The teenage boy battling cancer who loved Luke Bryan.

“He got healthy enough and I said, ‘Man. Let’s go see your hero,’” Overton said.

The two of them went; it was incredible. Months later, that boy died.

He found out the boy had passed away right before a Colts game in Houston. It put that football game, the NFL, professional sports – and life -- in perspective.

“I still wear his wristband to this day,” Overton said. “And I think about the spirit and strength he had.”