Flesh-eating disease was killing their child. Doctors brought him back from the brink of death

Katie Wilson-Perez would go into her son’s room while he was sedated and hold his little foot – his good foot. “That’s the only part of him I could reach with all the tubes and wires. I would just kiss his little foot.”

Flesh-eating bacteria. The very words are enough to make a person shudder. Imagine if someone you loved had the disease.

Katie Wilson-Perez doesn’t remember a lot from that time a year ago when her son nearly died. Trauma-induced memory loss, she calls it. And she’s almost thankful for it.

Jonathin Perez, then 4, had been feeling sick for a few days; he’d been to the doctor but wasn’t getting better. At first Katie and her husband, Evodio, thought it was just a bug that would run its course, but this “bug” came very close to killing him.

It was a Friday afternoon in April of 2018 when Katie took her son to his pediatrician for blood tests. While in the office, his arm started to swell. He told his mom his legs were hurting. Lucky for them, the physician sent Jonathin to Riley Hospital for Children, not wanting the family to have to wait over the weekend for test results. That move saved his life. 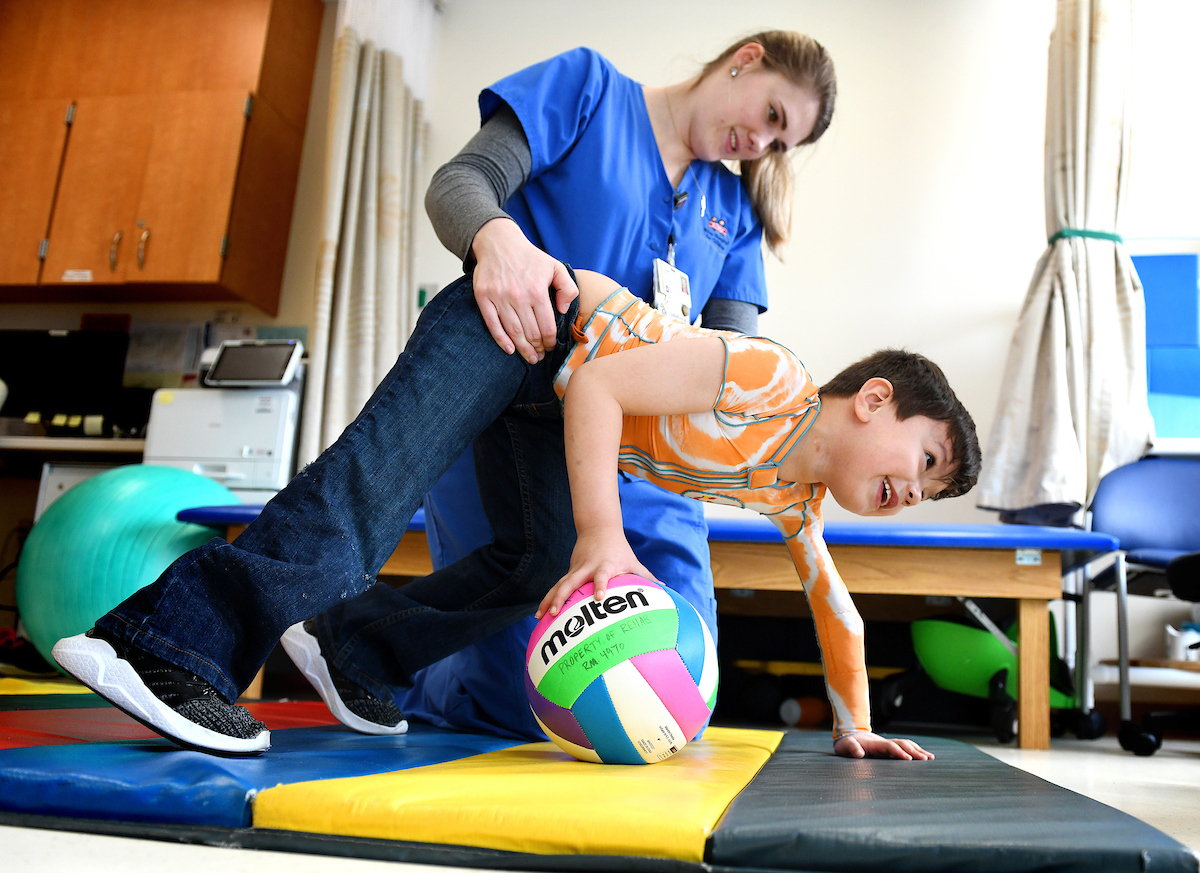 While at the hospital, Jonathin’s leg began to swell. By 6 o’clock the next morning, he had gone into septic shock, a severe and potentially fatal condition. Sepsis develops when the body has an overwhelming response to infection.

“Thank goodness we were in the right place,” Katie said.

FROM STABLE TO SEPTIC

Riley orthopedic surgeon Ryan Fitzgerald was in the operating room with another patient that same night. It was the wee hours of the morning, he said, when his resident got a call that there was a boy in the emergency department with a bacterial skin infection, but he was stable. They asked the physician to come by the ED when he finished surgery to take a look.

About an hour later, as Dr. Fitzgerald was finishing his surgery, the ED called back. The boy was now in the ICU, he was septic, and he was being pumped with vasopressors, meaning doctors were giving all of the medications they could give him just to keep him alive. 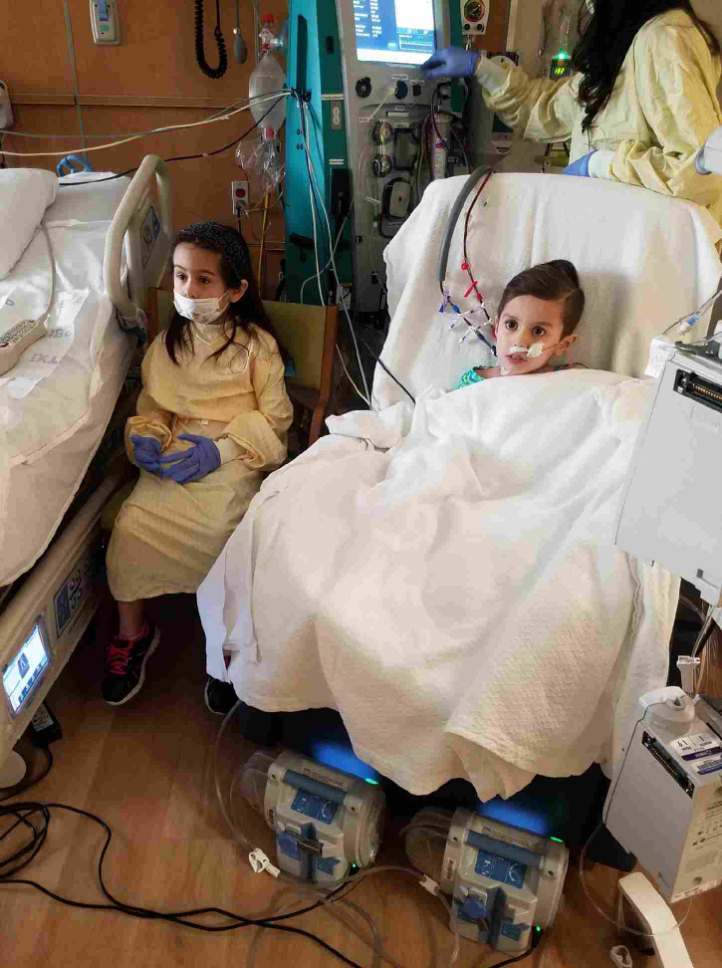 Jonathin had necrotizing fasciitis, commonly known as flesh-eating disease, a rare but potentially deadly infection that spreads rapidly and results in the death of parts of the body’s soft tissue. Symptoms include red or purple skin in the affected area, severe pain, fever and vomiting. It is most commonly caused by Strep A, the bacteria that causes strep throat. When it penetrates the body through a small cut or sore, it can cause necrotizing fasciitis.

In Jonathin’s case, it appeared to have started in his elbow and in a matter of hours had spread up and down his left arm.

“I immediately went to the ICU and saw him, and it was already enveloping his entire arm, the doctor said. “It was up to his armpit, coming around his shoulder, getting down to his hand, extending almost to his fingers.”

Doctors pulled the boy’s parents into a consultation room and told them Jonathin was very sick. He’s probably the sickest kid in this hospital right now, Katie remembers them saying, “and we don’t expect him to make it.”

“I think I was in shock most of the time,” she said.

She and her husband stayed in that small consultation room for a long time, while a crowd of specialists came in and out of their son’s room.

“There were so many people on hand to help they couldn’t even fit in his room. It was crazy.”

EMERGENCY SURGERY IN THE ICU 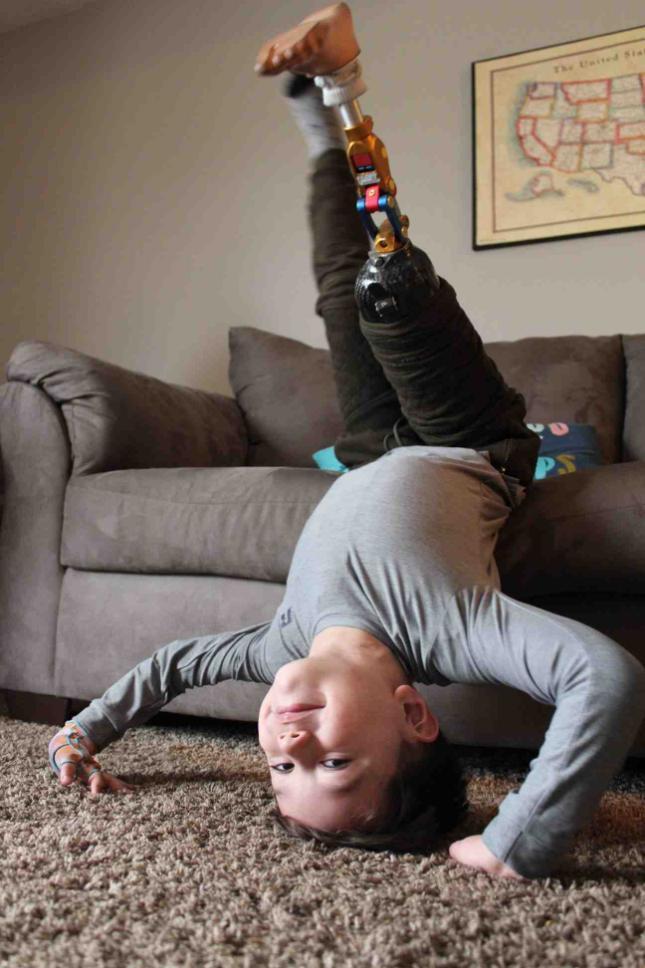 Dr. Fitzgerald knew the boy needed surgery right away to release the infection and wash as much of it away as possible. But Jonathin was too unstable to go to the OR, so they were forced to do it as his bedside in the ICU.

While ICU doctors kept pumping medication into Jonathin to keep blood flowing to his major organs, Dr. Fitzgerald made two incisions – one on either side of the child’s left hand – that ran up the arm.

“You need to know how serious of a condition this is, to be aggressive with irrigation, debridement and releasing the infection,” he said. “You have to know the anatomy and get through the fascia, the thick coating that surrounds all of our muscles, and take away any dead tissue. It’s lucky we got there when we did because it was just a few inches from his chest wall. We were lucky to get it before it made that turn.”

The mortality rate for those who contract necrotizing fasciitis can be as high as 80 percent.

While the pressors were keeping blood flowing to vital organs, they were taking blood away from the extremities. Jonathin’s right leg suffered compartment syndrome, a condition in which increased pressure results in insufficient blood supply to tissue.

“We had to do a fasciotomy of that leg to decrease pressure and increase the body’s ability to get blood flow to the leg,” Dr. Fitzgerald said. “Because it was pushing all the blood flow to the internal organs it couldn’t push it into the leg. That’s why he ended up with his amputation; the infection wasn’t there.”

Jonathin was placed in a medically induced coma for several days while the medical team struggled to keep him alive. He underwent dialysis for a time when his kidneys began to fail.

Doctors first feared they would have to amputate the boy’s left arm and right leg, but after determining the arm still had good blood flow, they were able to save it. Riley plastic surgeon Sunil Tholpady used skin grafts from the child’s thighs to cover exposed bone and muscle on his arm.

“We were able to salvage that and he has a functional arm – all of his nerves are working, which is surprising,” Dr. Fitzgerald said.

The leg could not be saved, but Dr. Fitzgerald was able to save half of the knee. An above-the-knee amputation would have been much more difficult for Jonathin to deal with long term. Because they were able to amputate between the leg bones in the middle of the knee, Jonathin won’t have to have surgery on his bones as he grows, his mom said. 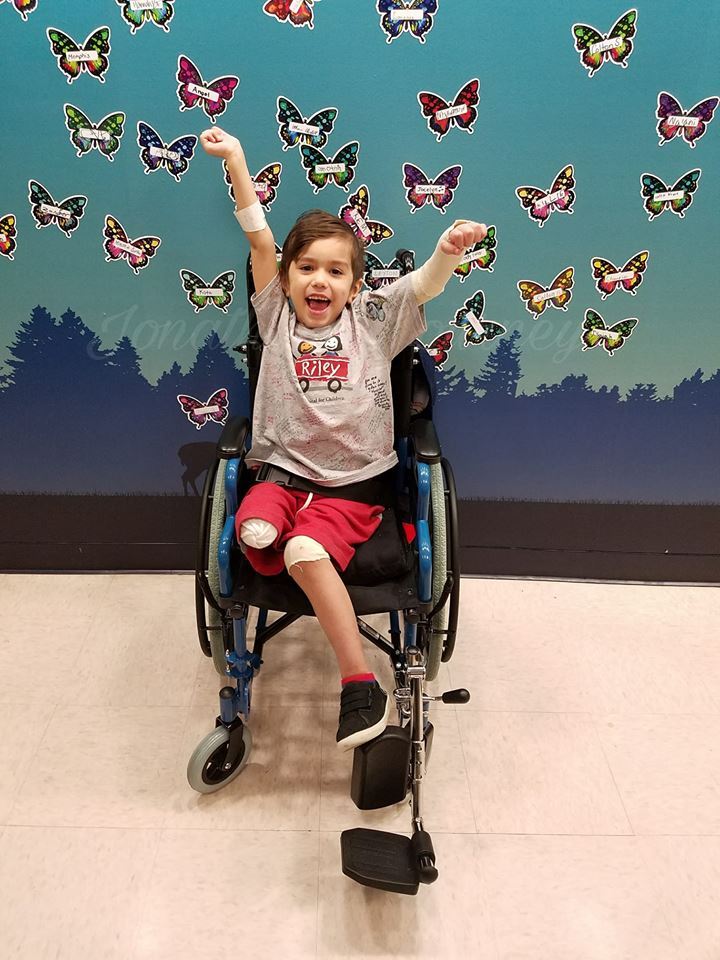 It was 20 days from the time Jonathin’s parents were told of the seriousness of his condition until the surgery to remove part of his leg.

During that time, Katie would go into her son’s room while he was sedated and “just hold his little foot – his good foot,” she said. “That’s the only part of him I could reach with all the tubes and wires. I would just kiss his little foot.”

She and her husband stayed with their son night and day those first few weeks, sleeping in the waiting room on the seventh floor. Family members cared for their daughter, Sophia, until they could be reunited. Jonathin would be in the hospital for nearly three months.

Believe it or not, Katie said she got through those dark days after the worst of it with a lot of sick humor and bad amputee jokes, she said. Jonathin went along with it.

“He actually named his stump,” she said. “He calls it Hinata (an anime character). Now it’s like Hinata is a second son. When I’m trying to sleep, Hinata is hitting me in the face, telling me to wake up,” she laughed. “It’s like when a kid has an imaginary friend and they blame everything on them, Hinata gets into a lot of trouble, not Jonathin.”

Katie laughs a lot, now that she and her family are a year out from this ordeal. But there are other days when she’ll just start crying. Those early days in the hospital are a blur to her, but her husband remembers every detail, so it’s been harder for him, she said.

The people at Riley made it easier, she said. “Everybody was so amazing. We met a lot of other families and just cried through it together.” 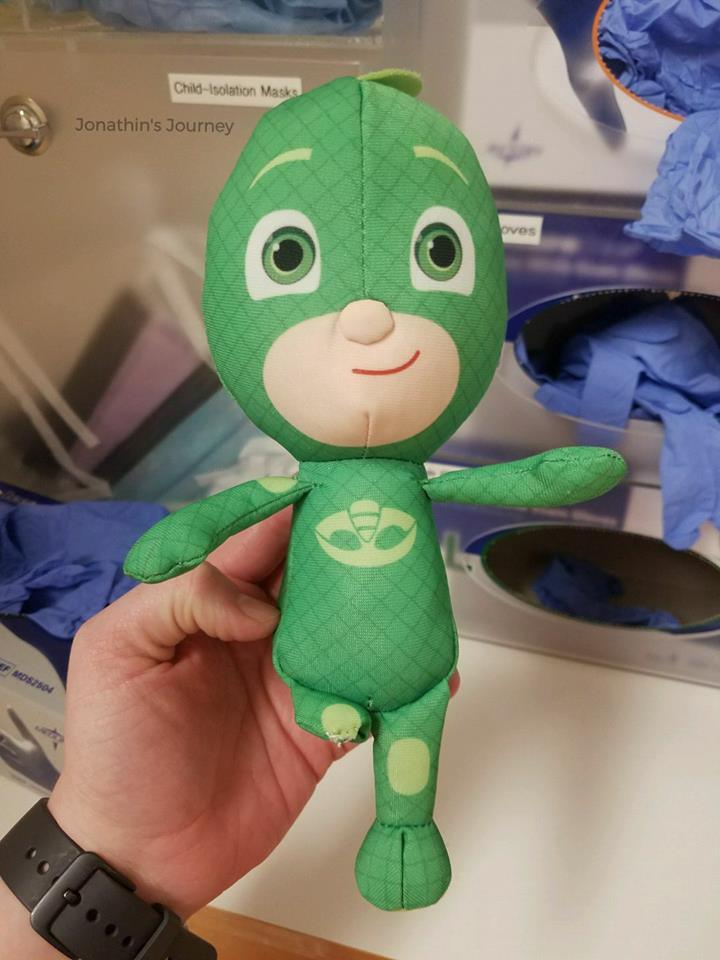 After the surgery to remove her son’s leg, Katie went to the store and found a toy figure of one of his favorite characters, Gekko from “PJ Mask.” She cut off his right leg and showed it to Jonathin.

“You still love Gekko, right? He’s just a little different,” she told her son, “but he’s still a super hero.”

The preschooler took her lead and did the same with another “PJ Mask” toy for a little boy he met who suffered the devastating loss of all of his limbs.

A month after his release from the hospital, Jonathin participated in the Ice Cream 5K for Riley Children’s Foundation. His parents pushed him in a wheelchair for most of it, but for the last few steps, Jonathin used a walker and one leg to hop toward the finish line. His mom cried, as did everyone around her. 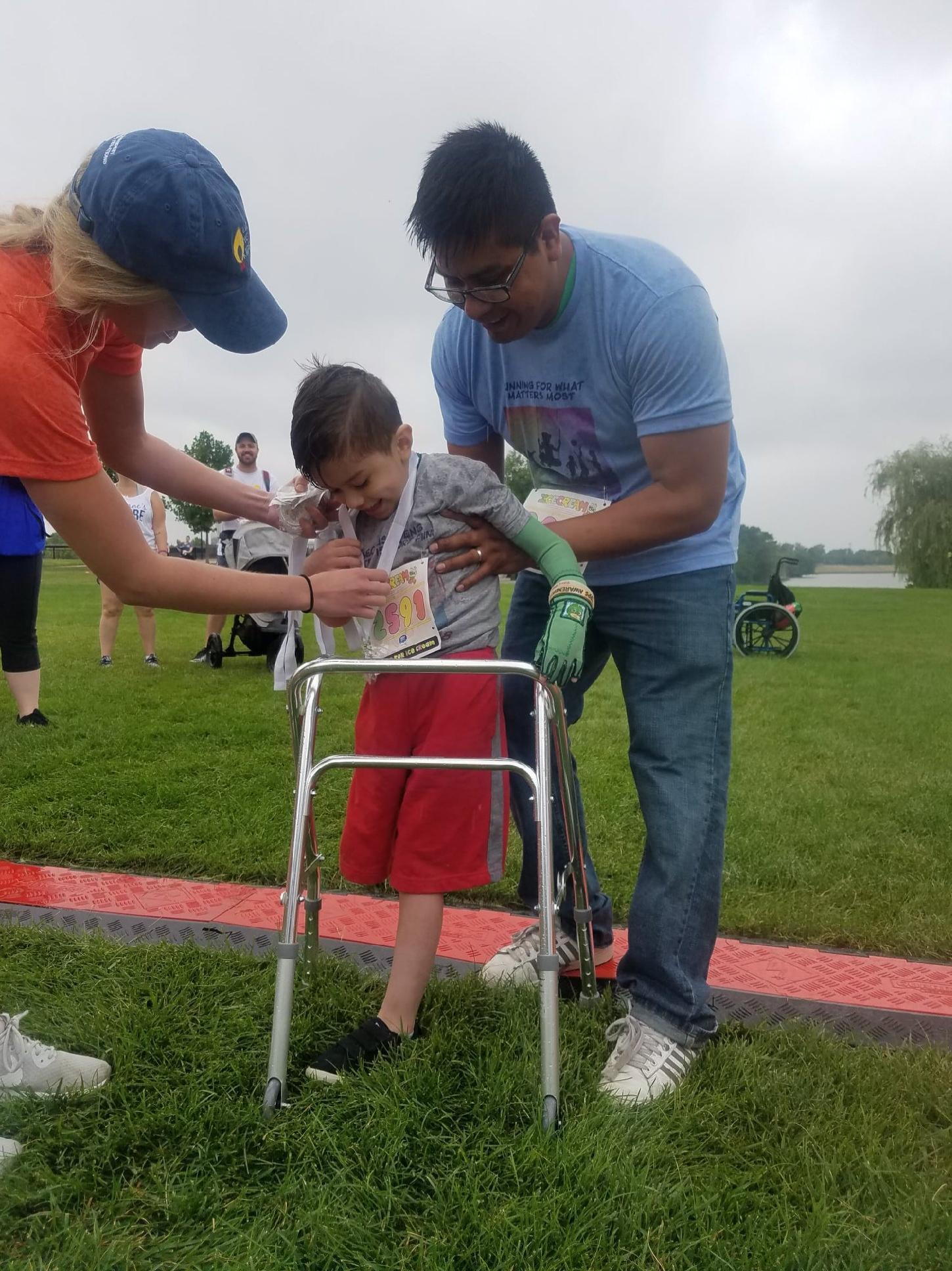 “It was raining, the grass and dirt were bumpy, and he fell twice, but he still got up and kept going with a smile on his face,” she said.

Jonathin, now 5, got a prosthetic for his right leg in late August and is back to normal now, his mom said. What’s normal?

“A crazy child who doesn’t stop moving. He goes nonstop.”

The Necrotizing Fasciitis Foundation heard about Jonathin’s story and invited Katie to serve on its national board, and on May 18, Jonathin will run in the group’s inaugural 5K in Louisville.

Jonathin’s story is a scary one with a mostly happy ending, but Dr. Fitzgerald doesn’t dance around the danger of his condition. Although rare, it can happen to anyone, even a perfectly healthy 4-year-old.

“He was on the brink of death, and we were able to pull him back from that. If he’d been here a couple of hours later, he probably would have died,” he said. “Now, with modern medicine and technology, we have a kid who can do pretty much anything he wants to do.”

At Riley, where he goes for physical and occupational therapy, he can be seen almost skipping down the halls on his prosthetic leg. He’s no longer on any medications. 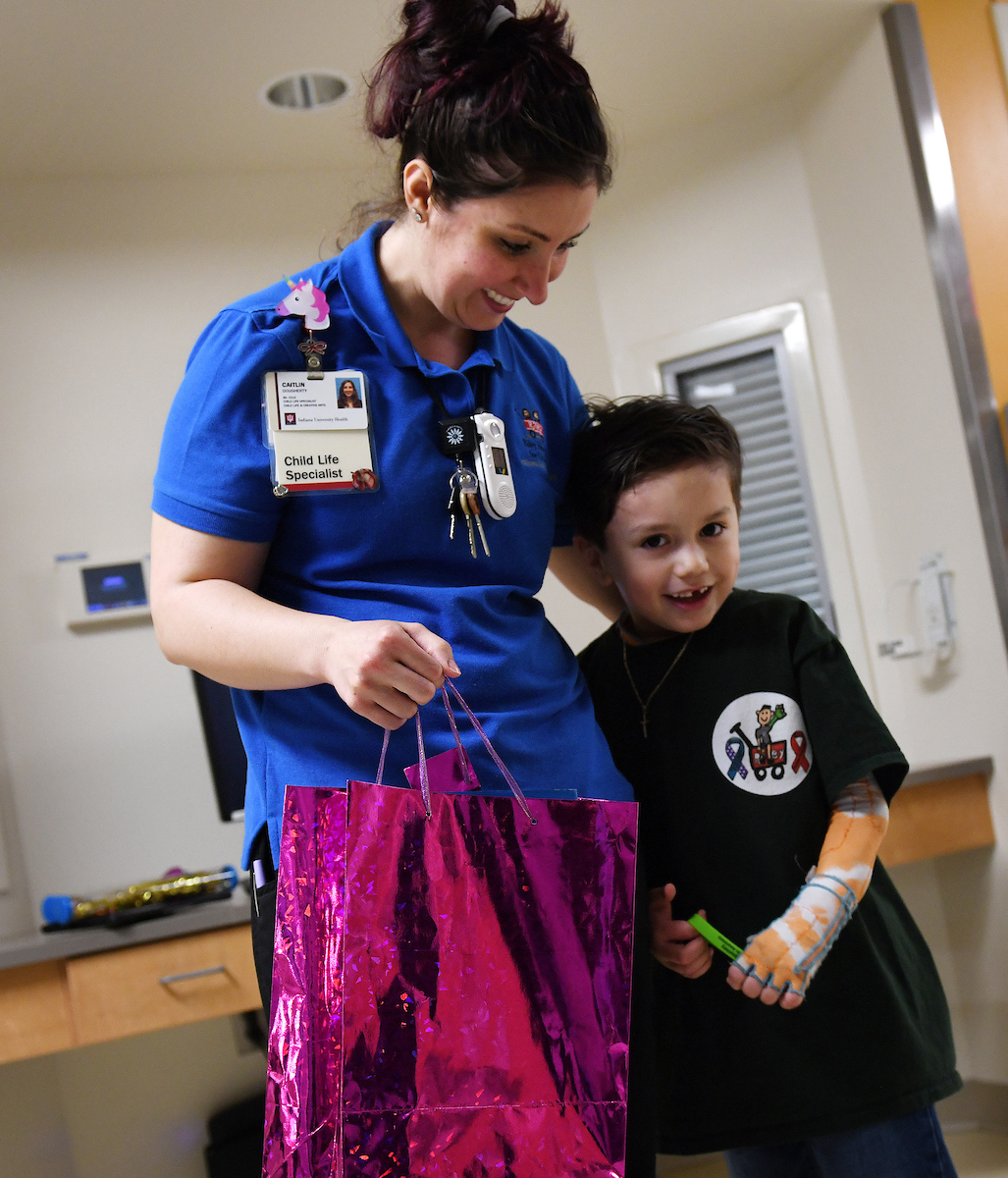 Jonathin and Katie were back at the hospital Friday for a therapy appointment, but first they made a stop on the fifth floor to see child life specialist Caitlin Dougherty, who helped during Jonathin’s healing. The family sold T-shirts and raised $235 for the child life team to help other kids facing life-changing challenges.

As Katie and Caitlin talked, Jonathin raced up and down the hallway. His mom couldn’t help but remember a different time.

“It’s crazy because this hallway is where he took his first hops with the walker, and now we can’t get him to stop.”