First came the cancer, then seizures that threatened to kill him – Noah beat both

Riley neurosurgeon Jeffrey Raskin performs a delicate operation to disconnect part of a 10-year-old’s brain to limit severe seizures. Similar to disconnecting the wires of a ticking time bomb, “it’s as aggressive as any epilepsy surgery gets, and we’re doing it here.”

Noah Howard was just 17 months old when doctors at Riley Hospital for Children removed a grapefruit-sized tumor from his brain, saving his life.

Nine years later, he was back at Riley for another surgery – a rare neurological procedure called a functional hemispherotomy to give him relief from worsening epileptic seizures he has suffered for years.

And last week, the 10-year-old went home, after spending weeks in rehab learning how to walk, talk and be a kid again.

It has not been an easy journey for Noah or his mom, Susan Pahls, of North Vernon, Indiana. Pahls has lived in a state of near constant anxiety for years, first with the cancer, then with the seizures.

After the malignant tumor was removed nine years ago, Noah went through 33 radiation treatments. 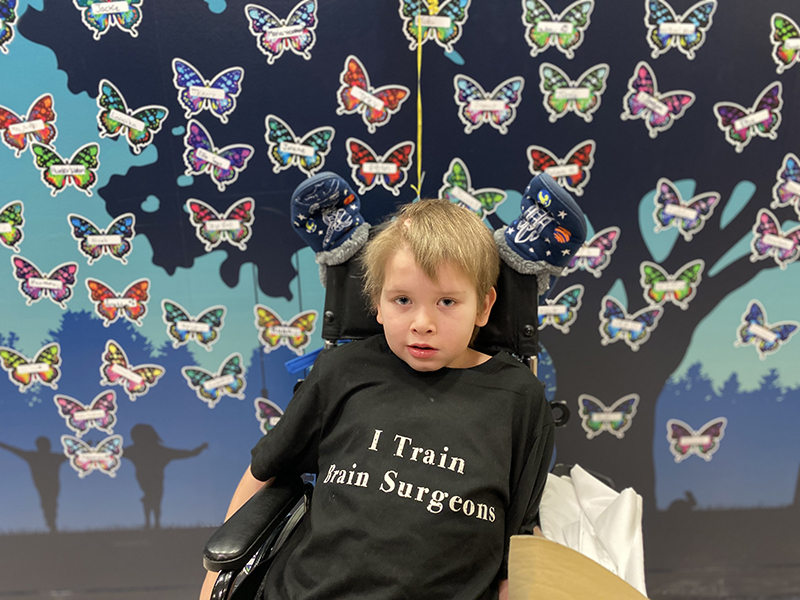 “He beat the cancer, thank God,” said his mom.

But the tumor and the radiation damaged the boy’s brain, contributing to severe seizures that threatened his life. It got so bad he had to wear a helmet to protect his head.

“The reason we brought him here was because of the drop seizures,” Pahls said.

Noah would fall hard to the floor in the midst of a seizure, often striking his head. It happened once in the driveway at home.

“If he didn’t have that helmet on, we would have been digging gravel out of his brain because he hit the ground so hard,” she said. “It was as if someone would hold him by his feet 10 feet in the air and drop him flat on his head.”

But those days are in the past, his mom hopes, based on the Dec. 23 operation performed by pediatric neurosurgeon Dr. Jeffrey Raskin.

A functional hemispherotomy is a disconnection of one cerebral hemisphere from the body and the brain, Dr. Raskin explains. It is used to isolate abnormal brain activity in one half of the brain to limit serious seizures. It offers fewer complications than a hemispherectomy, which involves physically removing the brain tissue. 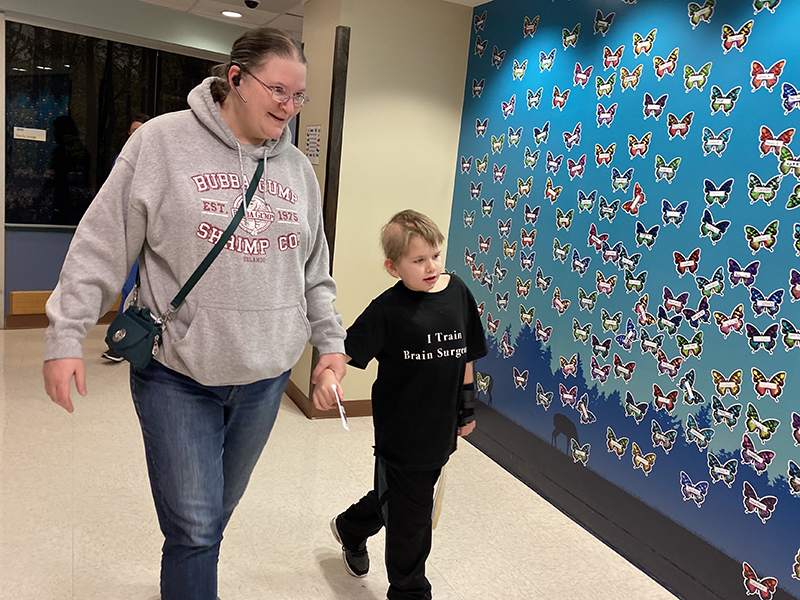 “In the early days of neurosurgery, they used to remove the whole cerebral hemisphere, and those people developed hydrocephalus (fluid accumulation in the brain) at a very high rate,” he said. “We found over time that if you leave brain tissue behind that’s disconnected, it seizes by itself but it just takes up space.”

In other words, it is no longer connected to the brain, so it can’t signal any distress to the body.

Dr. Raskin likens the delicate five-hour surgery to disconnecting the wires of a ticking time bomb.

“It’s very similar because there are literally wires that are bright red, pulsating arterial blood. One of the steps of the procedure is to disconnect a very large cerebral artery, and that’s a part where things can go bad pretty quick,” he said. “There are lots of wires in there, but it’s a really cool surgery. It’s as aggressive as any epilepsy surgery gets, and we’re doing it here.”

Noah’s family initially wasn’t sold on the idea of such a radical surgery, but when testing showed that the boy was having near constant seizures while he was sleeping, they agreed.

“One seizure alone is not all that bad. But if you get multiple seizures without the brain being able to rest, it releases all these neurotransmitters that then constantly activate the brain and create these strong pathways that are abnormal.”

For weeks after the surgery, Noah rehabbed at Riley before being released amid cheers and well wishes from hospital staff last week. The active boy could often be found during his rehab hanging out at the front desk of Virginia “Gin” Barnett, talking up a storm and “helping” her do her job as unit secretary.

Barnett, also a certified tech and phlebotomist, gets attached to the children on the unit, all of whom face challenges when they go home.

“When they say it takes a village, this is us – the nursing part of it, the rehab part of it,” she said. “The children can’t call out for us when they’re home. That’s why those tears drop, I believe, because they know that it’s a lot of us that help. They’re happy to go home, but they miss their village.” 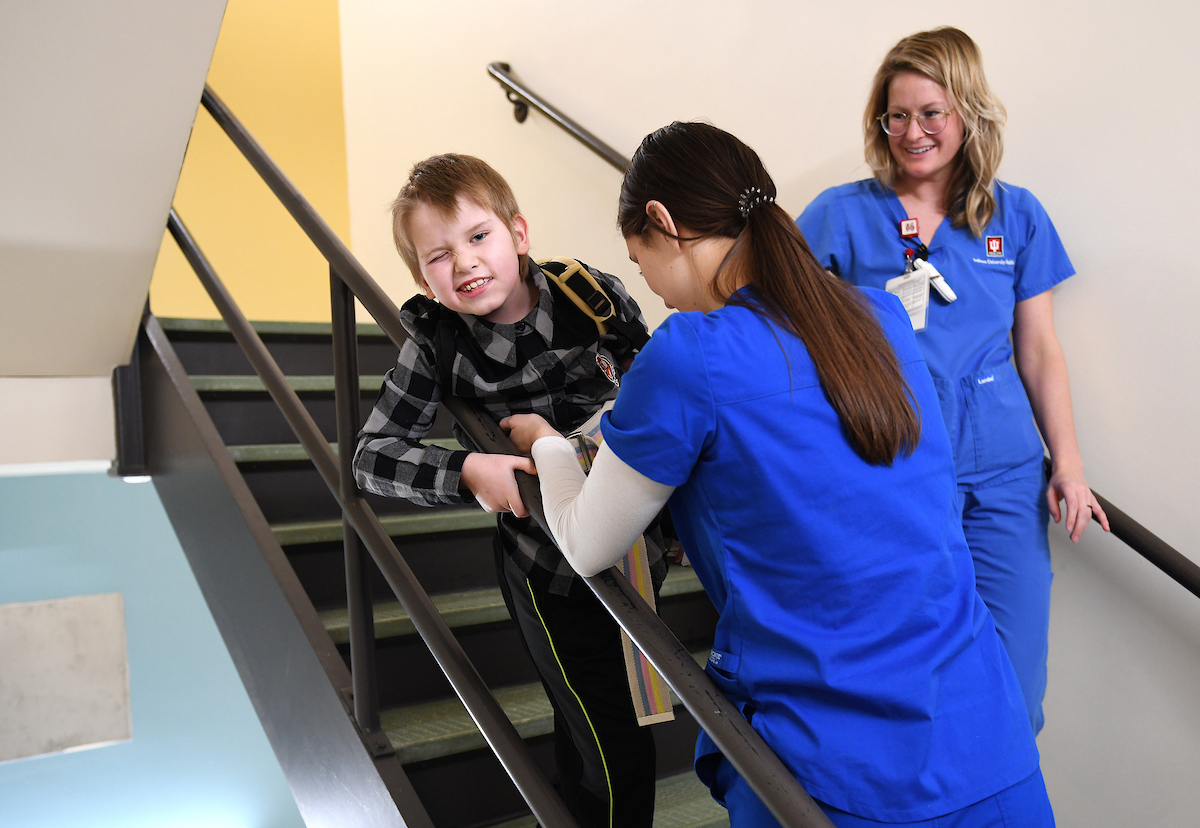 Physical therapist Kristina Davey, who worked with Noah for several weeks before his discharge, said his biggest challenge probably was his consistency in therapy, “but we’ve seen a huge improvement in him. We’ve worked on him getting up and down safely in his wheelchair, strengthening and balance, walking and taking stairs to be ready to get on and off the school bus.”

As Pahls watched her son work with Davey in his last PT session before going home, she marveled at how far he’s come.

“I think he’s progressed tremendously. I would tell anyone who has a child with total drug-resistant epilepsy about Dr. Raskin and this surgery. It stopped the drop seizures – they were going to kill him,” she said. “If he didn’t have the helmet, there’s no doubt in my mind we would not have him.”

Dr. Raskin had warned the family that the boy could suffer partial paralysis, but Noah proved him wrong. He said, “Noah, you’re calling me a liar and I’m loving it.”

Since the surgery, Noah’s seizures haven’t completely stopped, but he’s gone from near constant seizures to just a handful at night. It’s possible those seizures are coming from the other side of his brain.

“Our goal is no seizures and no side effects from medications,” Dr. Raskin said.

To that end, Noah will return to Riley later this month for a minor second surgery to disconnect a tiny part of his frontal lobe. The procedure is a minimally invasive laser ablation of one little connection, Dr. Raskin said. The hope is that this “touch-up” will do the trick.

The surgeon jokes that Noah never says anything nice to him, telling him to “shoo” when he would check up on his young patient. But he doesn’t take it personally.

“Like all of these kids, I’m very attached to him because we went through a ton of stuff together. I was inside his brain for five hours, I was talking about him for weeks before the actual surgery, and I would see him every day in the hospital.” 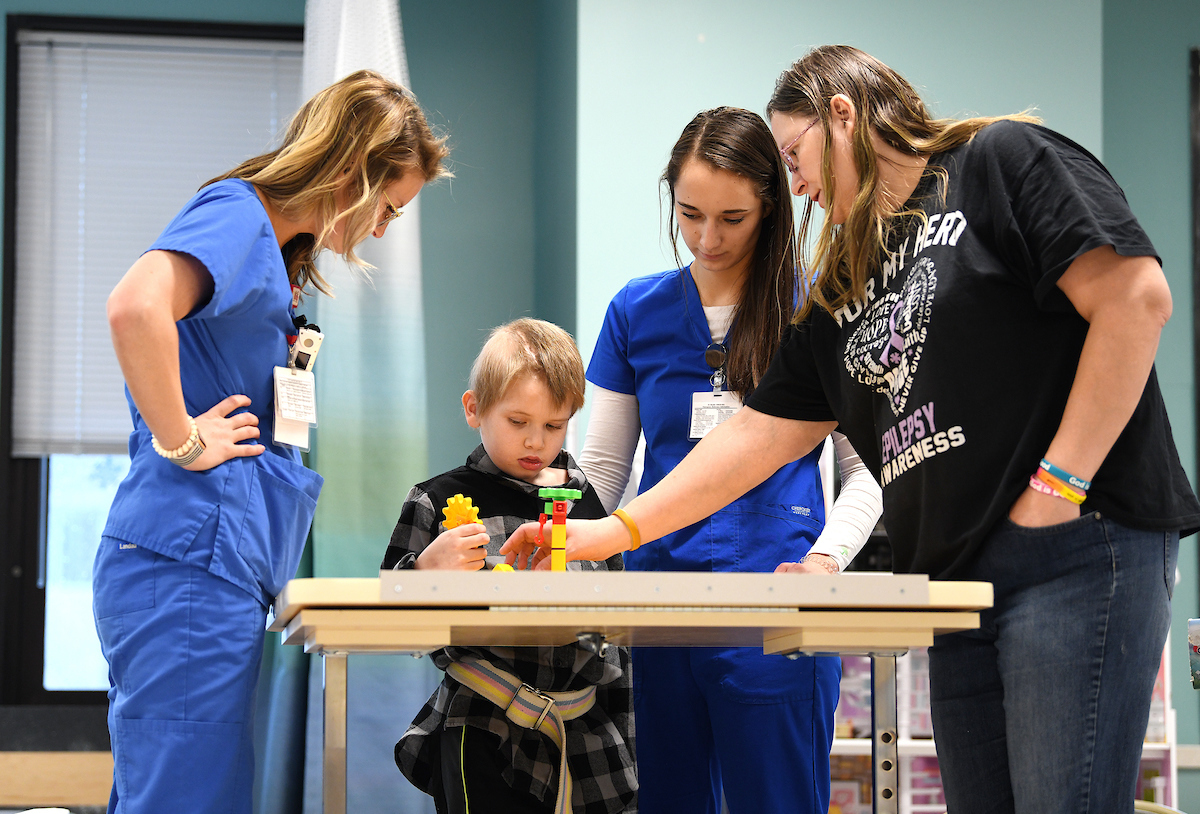 With continued therapy and family support, he believes Noah could recover to the extent that he reaches independence. His language skills are good and he’s walking with assistance.

“This is a really good illustration of how seizures have more of an impact on quality of life than tumors sometimes. His original problem was a brain tumor and it was an aggressive tumor. It’s because of the tumor and treatment that he had the seizures and that was really what was impacting his life. To remove or reduce the seizures is the most meaningful thing we can do for him. “

HE BROKE THE BELL

Dr. Robert Blake, Noah’s neurologist, was among a large group of clinicians who celebrated with the third-grader on his last day in the rehab unit. 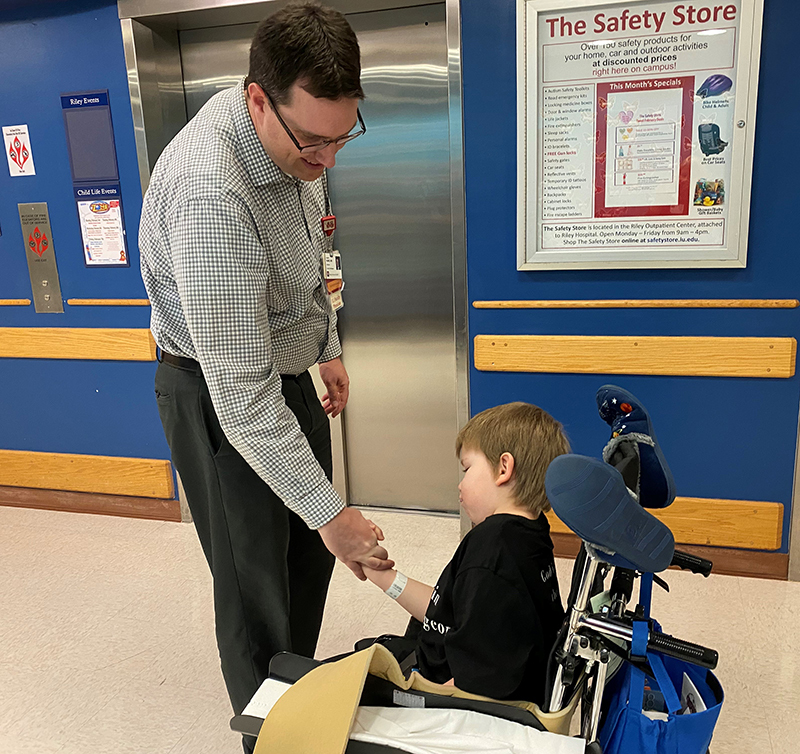 “Noah has suffered from medically intractable epilepsy, meaning seizures are hard to control, even with multiple medications. Since the surgery, there has been a definite decrease in the frequency and severity of his seizures. It’s an ongoing process, but he’s been a very brave and active boy throughout,” Dr. Blake said with a smile. “He’s very spirited.”

True to form, Noah rang the bell in rehab so hard it fell off the wall, but it didn’t faze him. He quickly pivoted in his wheelchair and proceeded out the doors to the butterfly wall, where he pinned his name in the lower right-hand corner and gave high fives and hugs to the staff.

Pahls recalls a point over a year ago when Noah was on a new medication that helped him live seizure-free for six months. The results did not last, but she remembers it as a magical time when her son was just beginning to live. He noticed the world around him for what seemed like the first time.

And now, she said, “he’s beginning to live again.”