He didn’t win many races on the track, but this lovable pup is winning the hearts of patients and staff.

He was a racing greyhound in Florida with the nickname Outlaw. Today, he’s known as Finn, the newest member of the therapy dog team at Riley Hospital for Children.

Finn is 75 pounds of lean muscle, long legs and a sweet disposition. He’s the first greyhound in the Riley program, but if child life specialist Kim Ziegler has her way, he won’t be the last.

“He has a very calming presence, he’s just very chill,” Ziegler said as she and Finn’s owner, Kathi Moore, prepared to take him on evening rounds to see patients. “That’s what I look for in my therapy team dogs. If you have a hyper dog, it’s not going to be that great of a visit.” 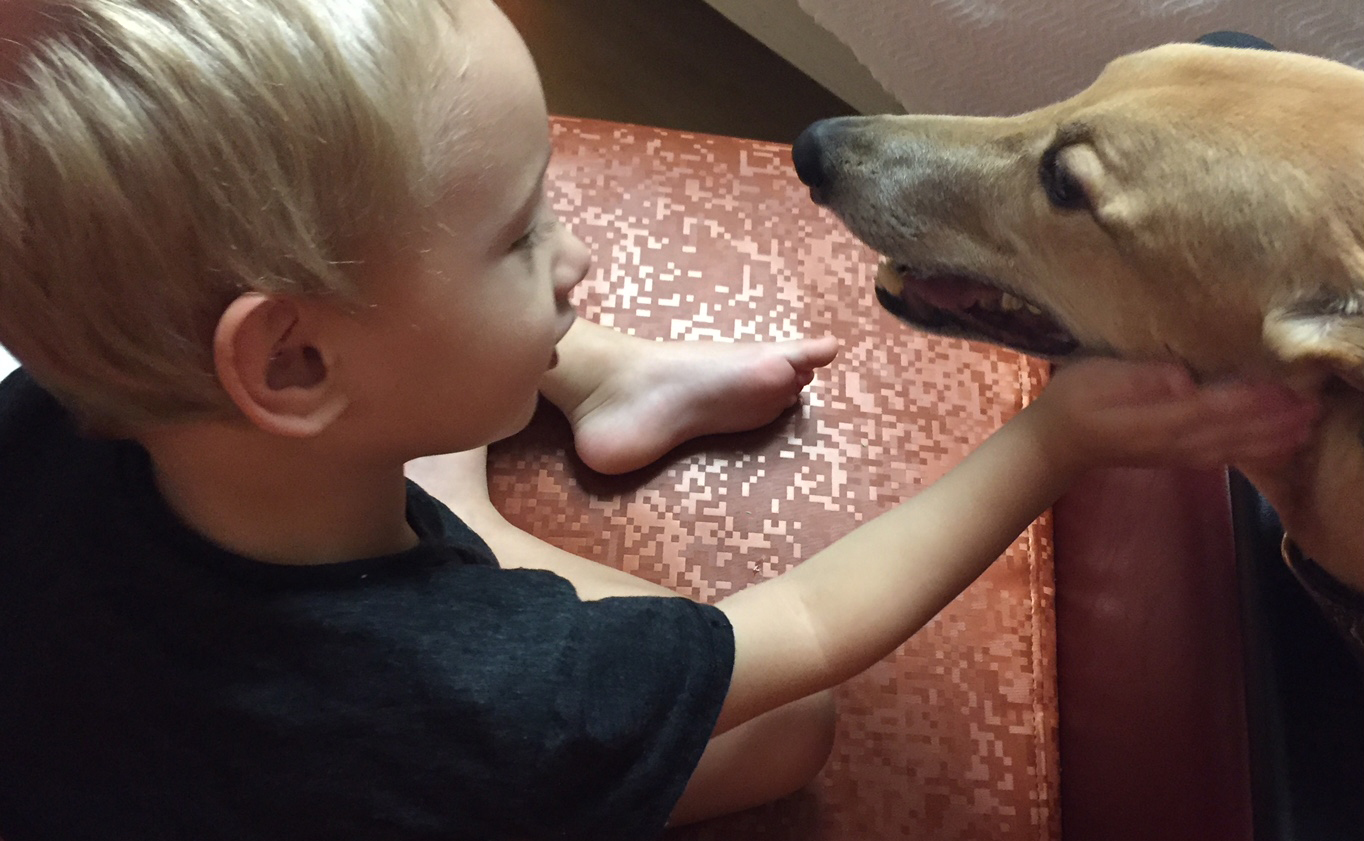 Greyhounds are known for being affectionate, intelligent, quiet, gentle and even-tempered. Finn is all these things, Moore said. “I know I can totally trust him.”

Finn, 4, came to Indianapolis by way of Prison Greyhounds, a nonprofit that rescues and retrains the animals. Moore adopted him and enrolled him in the Paws & Think pet therapy program. The organization serves at-risk youth, at-risk canines and children and adults with disabilities and special needs in Central Indiana.

Moore has seen video of Finn’s two-year racing career and said he might not have won a lot, but he loved to run. “He just didn’t care if anyone ran in front of him. He didn’t care if he won or not,” she laughed. 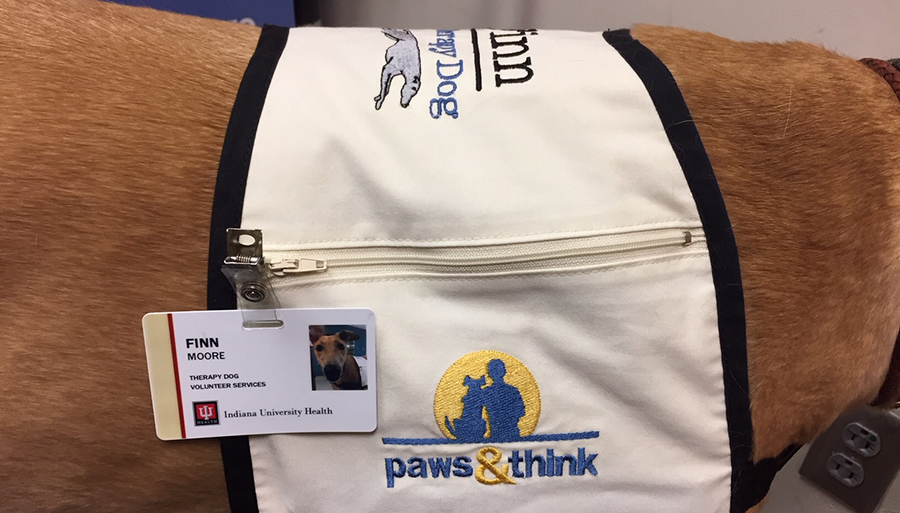 Since May though, when he came on board with Riley, he’s been winning the hearts of patients and staff.

Lily Bales, 10, Muncie, is a fan. She met Finn this week when he and his team stopped by her room at Riley. Her eyes lit up when Finn, who weighs as much or more than she does, leaped up onto her bed with permission.

She gently pet him and talked about the pup she has at home. Her English bulldog is a lot shorter and pudgier than Finn. She also loves rabbits and shows them in 4-H, but it’s a good thing there wasn’t a rabbit in the room with Lily.

“Very little fazes him unless it looks like a rabbit,” Moore said.

As Finn settles in for a snooze on Lily’s bed, Ziegler hands the fourth-grader Finn’s “business card,” a picture of him with stats on the back. “He’s sleeping on the job,” Ziegler said. 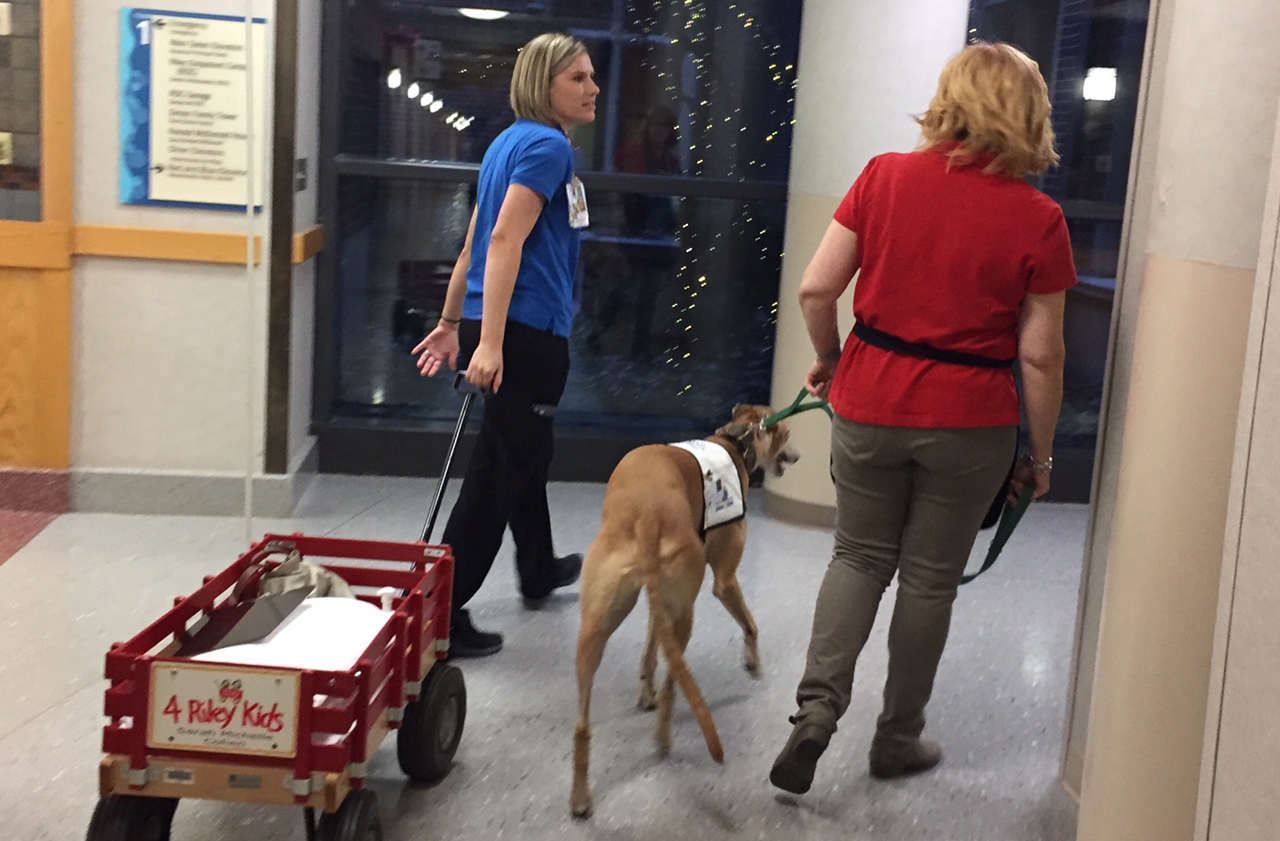 Moore brings Finn in twice a month for pet therapy. It’s the first time she’s been involved in the program, but she knew Finn would be a good fit.

“He’s just so easy-going, I thought he’d be good at this.”

There are 17 dogs in Riley’s pet therapy program, which Ziegler oversees. The most common breeds are Labs, Golden Retrievers and Doodles, she said.

“I was so excited when I saw Finn because he is so different. You don’t see greyhounds very often.”

Ziegler hopes to get her own greyhound someday. She and her mom have talked about adopting one of the thousands that will be displaced in the wake of Florida’s recent decision to outlaw dog racing.

On Nov. 6, Florida voters approved a measure that bans all wagering on dog races as of Jan. 1, 2021.

When the visit with Lily is over, Finn jumps up from his comfortable spot on the bed and follows Moore and Ziegler down the hall to the next room.