Four months ago, Olivia Stoy was told her T-lymphoblastic lymphoma had returned. She would be fighting the cancer battle again, but this time with a little warrior at her side. Her 7-year-old brother, Preston, will be the donor for her bone marrow transplant.

The people closest to Olivia – and even the people who hear her story for the first time – are amazed by the strength of this 14-year-old girl. 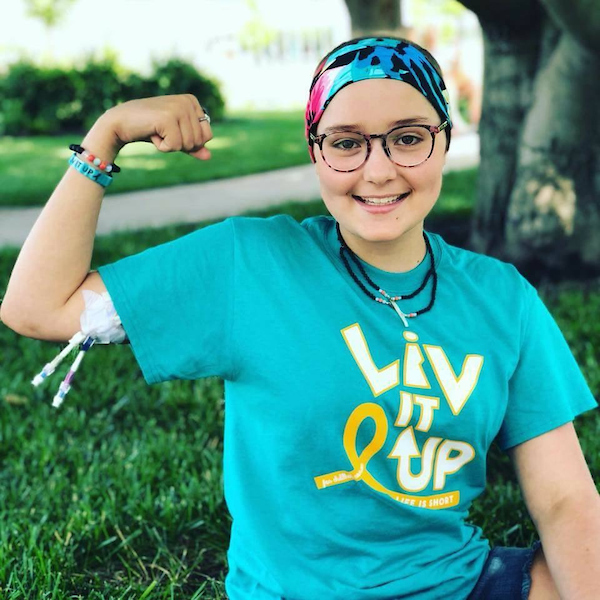 “I just don’t focus on the negative things,” says Olivia, of Angola, Ind.

But Olivia could focus on the negative things and no one would blame her. After all, she’s had a tough journey the past two years – a scary and painful journey fighting cancer.

As Olivia sat at Riley Hospital for Children at IU Health Wednesday, she was on that journey a second time, going through the unknown all over again.

At age 12 in 2016, Olivia was diagnosed with T-lymphoblastic lymphoma. She went through the treatments and in February of 2017 was declared cancer free.

Just when she thought it was all over, four months ago, the cancer relapsed.

And now she will fight again. 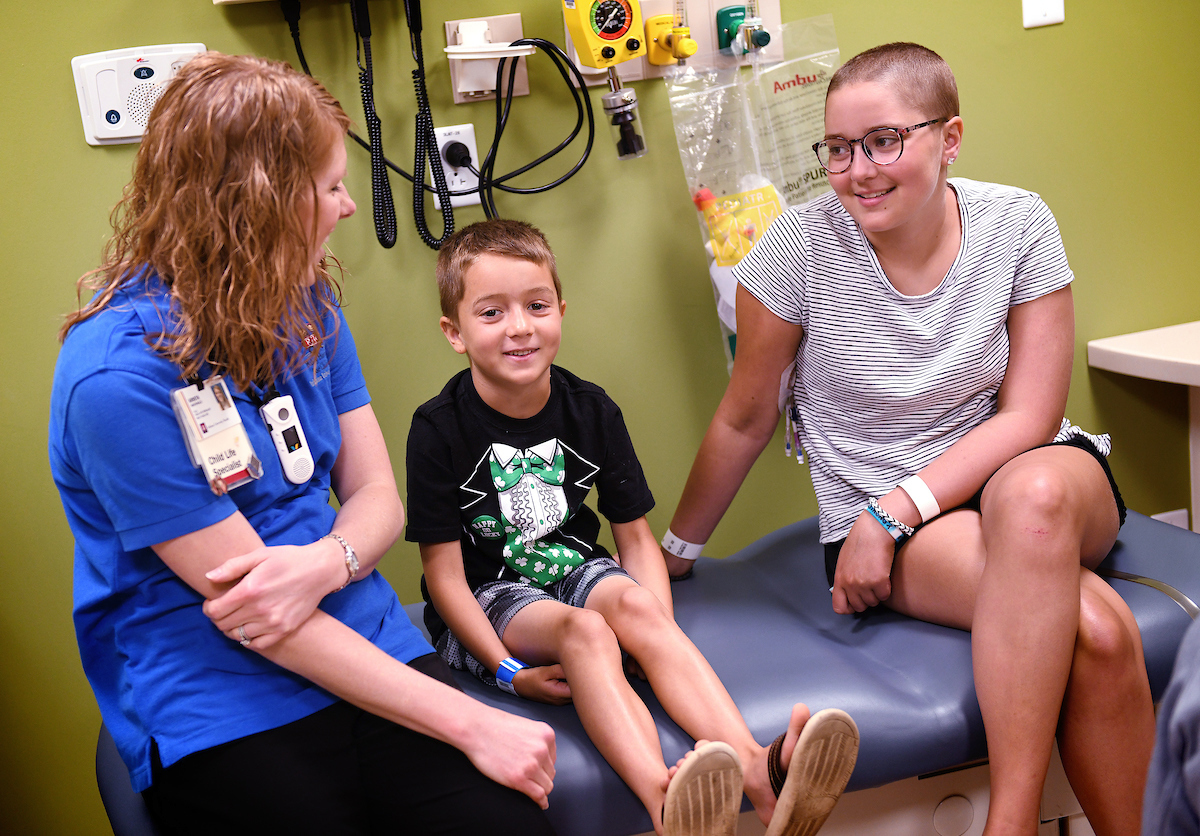 “I just look ahead to the positive,” she says, “and what the future has. And put my faith in God.”

This time, Olivia has a little warrior fighting with her. Her 7-year-old brother, Preston, will be the donor for her bone marrow transplant next month. He was a 100 percent match.

Preston was a little hesitant about the procedure at first, Olivia says.

“We just had to explain everything that would be happening,” she says. “Now, he’s good.”

Lymphoblastic lymphoma is an aggressive form of non-Hodgkin lymphoma. It starts when white blood cells, called lymphocytes, become abnormal and grow in an uncontrolled way. Those abnormal lymphocytes then build up in one or more parts of the body.

The disease is relatively rare, accounting for about 2 percent of all non-Hodgkin lymphomas.

“Olivia is amazing, so strong,” says Jodi Skiles, M.D., director of stem cell transplant at Riley. “The patients I take care of, they have lived and breathed life and death in front of me every day. They really know more than most of us. They know what the important things in life are.”

For Olivia, one of those important things is giving back. She will be a freshman at Angola High School in the fall. She plans to go to college to study to become a pediatric nurse practitioner.

“Going through all this medial stuff is what has inspired me,” she says. She wants to help children fighting battles like her own. 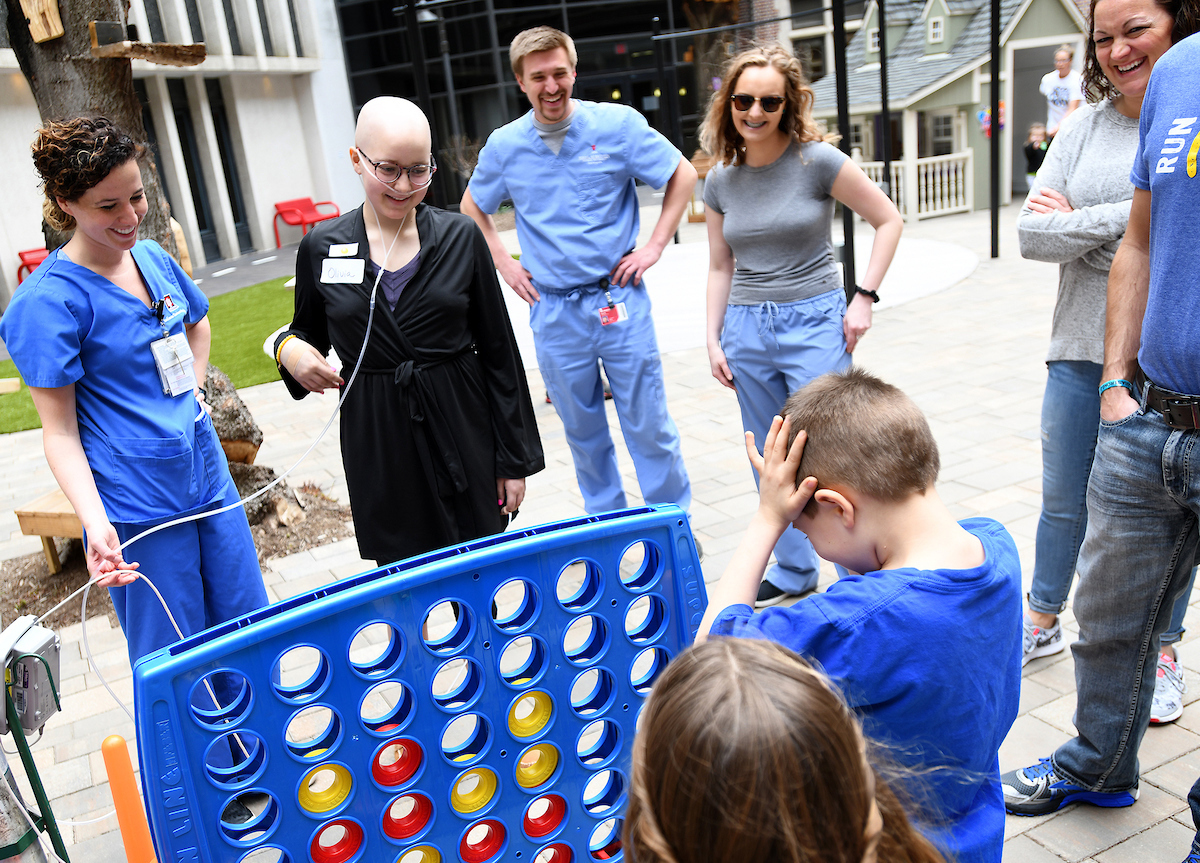 In her free time, Olivia likes to cook and try out new recipes. She likes to swim, ride her bike and hang out with friends and family.

She’s also been busy finding ways to help other kids with cancer.

Olivia’s bone marrow transplant will cost $350,000. With donations made on her GoFundMe page and proceeds from selling bracelets, Olivia has raised the needed $350,000. Olivia designed the bracelets with the help of Emily Bryan, owner of EmilyKai in Fort Wayne, who sold the bracelets on her website as a fundraiser.

Now, the upcoming fundraisers in Olivia’s honor will go to added medical costs after her transplant. But they will also go somewhere else.

“I’m hoping to give it back to other patients,” Olivia says.

“Patients like Olivia, they have this air of wisdom,” she says. “This air about what is important.”