After Mitch Mitchell spent 126 days at Riley Hospital for Children at IU Health watching nurses care for his newborn daughter, he made a big decision – to go back to school for nursing. He’s now an oncology nurse at Riley.

As he checks the blood pressure of Janelle Alexander, 4, Mitch Mitchell prompts his young patient to sing the ABC’s. From a window seat inside an oncology room at Riley Hospital for Children at IU Health, Mitchell shares stickers of Janelle’s favorite Disney characters, and takes turns with her pumping the pressure cuff.

“I’m using my special power to keep the cuff in place. Just like Elsa,” he says, referring to the character from the Disney movie, “Frozen,” who has the ability to turn almost anything into ice. And just like the character, Mitchell’s bedside care of his young patient is like a moment frozen in time. 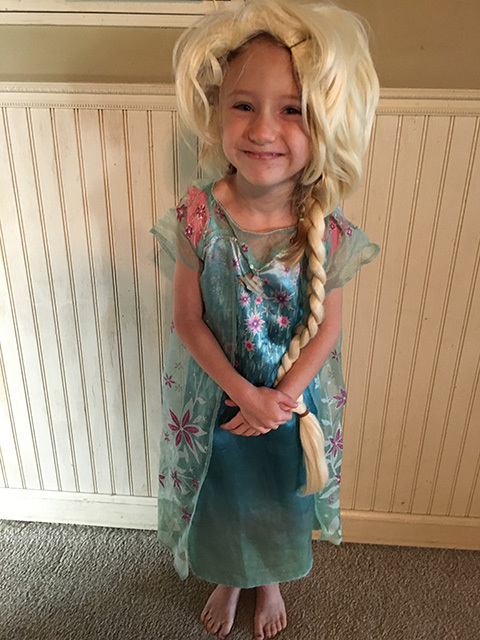 For 126 days, Mitch Mitchell listened and watched as nurses at Riley lovingly cared for his newborn daughter. He became so familiar with the NICU that he learned the “lingo” and researched terms and conditions. It was that loving care that persuaded Mitchell, 36, to change his career. He went back to school, got his nursing degree, and recently returned to Riley Hospital as an oncology nurse.

“The nurses constantly sat and talked to me. In NICU, you can’t just pick up your baby and love on her. A lot of the time was spent just looking at her and and wondering what was next,” recalls Mitchell. “The nurses helped us navigate the path. Every day was different. Two steps forward, 10 steps backward. And when we were down, they kept going. You could tell they were exhausted, but they never quit. That compassion really stuck with me.”

So 13 years after receiving his first degree, in health administration, Mitchell went back to college to become a nurse. The whole time he had his sights set on one thing: Working at Riley Hospital.

It was in December of 2011 when Mitchell and his wife Nickole learned they were expecting their third child – a pregnancy they were initially told would not be possible. They already had two boys Evan, 3 and Aiden, 5. His wife had severely high blood pressure with her first pregnancy and delivered four weeks early.

But two months after they announced their pregnancy – on Valentine’s Day, 2011 - the couple celebrated the gender reveal. They were having a little girl. Her name would be Addison Grace. They began to imagine this sweet little angel playing with dolls, braiding pigtails, and chasing butterflies in the backyard.

But a little more than a month later, on March 26, Nickole Mitchell went into pre-term distress. She was transported from their Shelbyville home by Lifeline helicopter and delivered Addison “Addy” at IU Health University Hospital. The newborn was 26 weeks old and weighed just over a pound. Her little body was the length of a sheet of paper, 11 inches.

That day was just a blur for Mitchell. He drove from Shelbyville to Indianapolis on autopilot.

“Everything just happened so fast. Addy was born at University Hospital and was immediately taken to Riley NICU,” said Mitchell. “My wife was in one hospital and I just remember walking back and forth with the boys. We stayed at Ronald McDonald House so we could be close by.”

When he visited his newborn, her footprint just the size of a quarter, Mitchell said she was so vulnerable that she didn’t seem real.

“There were so many issues – chronic lung disease, retinopathy of prematurity, staph infection  - but the nurses were always right there, encouraging us, helping us find our way through the NICU journey,” said Mitchell.

A video the couple made for their family and friends chronicles that journey. There are pictures of Addy hitting a milestone of two pounds, Nickole Mitchell holding her daughter for the first time at a week old, and Addy later modeling her first outfit from Mitchell, a cotton jumpsuit with “Daddy’s Princess” printed on the front.

When her eyes were covered protecting them from the UV lights of NICU, her mom sat nearby telling Addy that she’d take her to the beach when she got stronger. And photos in the family video show a healthy 15-month-old near the ocean, wearing a floral bathing suit and a stylish pair of shades.

Another photo shows Addy all dressed in pink, her hands clasped in prayer with a caption that reads:  “Praying I get to go home soon.”

Eventually, the blue eyed, blonde haired wonder gained enough strength to join her two brothers at their Shelbyville home. Pictures show her sitting in a wagon, her older siblings riding bikes by her side. And other pictures show Addy modeling a red tutu by a Christmas tree, her feeding tube still attached.

Mitchell thinks he may have always been destined to become a nurse, but his experience at Riley sealed it.

In his valedictorian speech at Southwestern High School graduation, Mitchell announced he was pursuing a career as a pediatrician.  But the timing wasn’t right. He and his wife met their senior year of high school. Both went on to graduate from Indiana University in 2003 and were married a few months later. At the same time, his mom was fighting a battle with melanoma. She passed in 2004. His dad died of lung cancer six years earlier. Both were patients at IU Health.

After college, Mitchell, the youngest of three, stepped in to run the family bakery business.

“It’s so strange how things happen. The time wasn’t right then for me to pursue a career in a medical field. But having mom and dad both at IU Health and having my daughter here – well, let’s just say I wear the emblem with pride,” said Mitchell. And all through nursing school, he said he knew where he wanted to work – oncology.

“Oncology just felt right but there’s also something about the atmosphere at Riley in general,” he said. “People want you to succeed and we all have the same goal. It’s all about the patient’s quality of life.”

As Mitchell recently spent time caring for the young Janelle Alexander, her parents watched their daughter’s mood change. She didn’t want to be poked or prodded one more time. But soon, she looked at the care as a game. She tried on Mitchell’s stethoscope, and then helped adjust her blood pressure cuff.

“He is wonderful. He’s so good to her,” said Janelle’s dad, Bada Alexander, who along with his wife Evelyn Alexander and their year-old daughter Jadyn have been in and out of Riley for two months. Janelle has undergone surgery and chemotherapy to treat Wilm’s tumor, a cancer that starts in the kidneys.

Mitchell remembers what it was like as a parent.

“These are going to be some of the hardest times they’ll ever go through and their child is going to experience a lot of hurt and a lot of pain. If I can take their minds off of it for just a few minutes then hopefully they will know the disease isn’t what defines them. I know that rollercoaster. I know how they are feeling. I want to give them hope.” 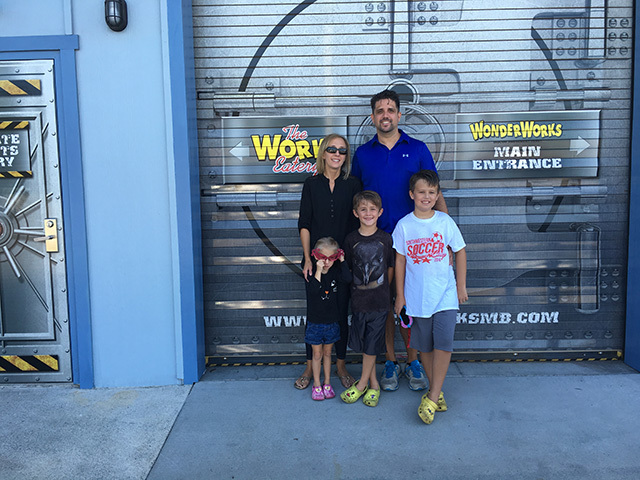 “Addy is feisty and definitely keeps up with her big brothers. She pretty much runs the show,” said Mitchell, who coaches his sons’ youth basketball and soccer teams.

And what does the future look like for Addy?

“When she was in NICU my wife kept telling her if she would make it out, we’d buy her the prettiest prom dress ever,” said Mitchell. “My wife had a beautiful prom dress but I have a feeling my daughter’s prom dress is going to cost more than my wife’s prom dress and wedding dress and that’s just fine with me. I look forward to that day. She’s worth it.”