“I remember her dad telling me that Kyrie’s favorite song came on the radio while they were driving shortly after her implants had been activated and he was nervous about what Kyrie would think about it,” says Katie Jones, an audiologist at Riley. “Adults with cochlear implants have said that music doesn’t sound like what they remembered before they lost their hearing.” Kyrie liked what she heard. She smiled ear to ear and started dancing along in her seat.

The hearing loss came rather suddenly for Kyrie Norris, about a year ago when she was 3 years old. “Last April, Kyrie developed dual ear infections that just wouldn’t let up,” recalls Travis Norris, Kyrie’s father. “She wasn’t responding to her name or directions at daycare anymore, and her hearing started to go downhill.”

An ENT in Terre Haute, Indiana, where the Norris family lives, suggested that Kyrie get ear tubes implanted in her eardrum to equalize pressure in the middle ear and relieve the fluid buildup that they suspected was causing the hearing loss. But after the procedure, Kyrie’s hearing did not improve. “It was obvious she could not hear a word anybody was saying when she got out of surgery,” says Jennifer Norris, Kyrie’s mother.

“The doctor said he didn’t find much fluid in Kyrie’s ears after all. So we asked, ‘Then why can’t she hear us?’ The staff looked at us and said they weren’t sure but that Kyrie was deaf,” says Travis.

Devastated, the family rushed to the emergency room at Riley Hospital for Children at Indiana University Health that evening. Though they didn’t expect an immediate intervention, Jennifer and Travis wanted to get Kyrie into the Riley system quickly in order to get help as soon as possible. “Kyrie had been without hearing for about five weeks at that point and we didn’t want her to lose any speech abilities,” explains Travis. “We couldn’t afford to wait.”

The staff at Riley understood the urgency and booked Kyrie an appointment for the very next day with Rick Nelson, M.D., Ph.D., a pediatric otolaryngologist. After a hearing testing in the audiology lab, an auditory brain stem response (ABR) test, a CT scan, and an MRI, Dr. Nelson diagnosed Kyrie with enlarged vestibular aqueducts. The genetic condition, which often becomes apparent during childhood, is associated with full or complete hearing loss. 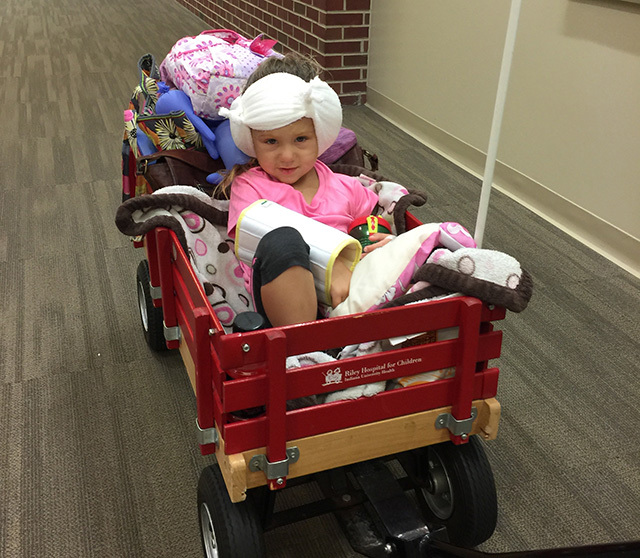 Dr. Nelson determined that Kyrie would be an excellent candidate for cochlear implants, which are electronic devices that are surgically positioned inside the ear to replace the function of the damaged parts of the inner ear. The implants work by electronically stimulating the cochlea’s hearing nerve, which then sends signals to the brain that are interpreted as sound. The system also includes a battery-charged sound processor that’s usually worn behind the ears to capture sound, turn it into digital code, and send it to the implants.

After a required trial with hearing aids, which provided no benefit for Kyrie, she was cleared for cochlear implant surgery in both ears. But as Jennifer and Travis waited for their August surgery date, they had a hard time adjusting to their new normal. “We were grieving the loss of her hearing,” says Jennifer, who began teaching Kyrie and the family’s two other children sign language. Jennifer and Travis were worried about how Kyrie would adapt to the implants and how her speech would be affected long term. “Kyrie loves to chat and though she was able to communicate with us all along, she did stop talking at school,” says Jennifer.

Still, Kyrie was a trooper and the Riley staff was a huge support. “They let us show Kyrie the implants and helped her understand what she would soon have,” says Travis. “The doctors, nurses, and audiologists were in constant contact with us. We never felt alone.”

Finally, in late August, Kyrie had the 5 hour bilateral cochlear implant surgery. The medical staff kept the Norris family informed every hour that the surgery was going smoothly. Then, at the end of September, after Kyrie’s surgical incisions had healed, the audiologists at Riley “activated” her cochlear implants.

“When we first turned on the device we set the volume levels conservatively to slowly introduce sound to the hearing nerve,” explains Katie Jones, an audiologist at Riley who has worked closely with Kyrie.

When the implants were first activated, Kyrie was scared because she had not heard any sound in five months. “It probably sounded like beeps or something mechanical to her,” says Jones. “But kids’ brains are like sponges and they’re able to learn to take the new information they get and interpret it auditorily.”

A week later, at Kyrie’s next appointment, the audiologists increased the volume levels and adjusted Kyrie’s implants during a process they call “mapping,” which they do periodically over several weeks and months after cochlear implant surgery to fine-tune the system to each patient. And it was at this second post-operative appointment that Kyrie truly understood she could hear again. “She was really happy,” says Travis.

Soon afterward, Kyrie seemed to begin hearing things almost without missing a beat. “I remember her dad telling me that Kyrie’s favorite song came on the radio while they were driving shortly after her implants had been activated and he was nervous about what Kyrie would think about it,” says Jones. “Adults with cochlear implants have said that music doesn’t sound like what they remembered before they lost their hearing.” Kyrie liked what she heard. She smiled ear to ear and started dancing along in her seat.

These days, Kyrie wakes up each morning, grabs her external ear processors and asks her mom to put them on so she can hear. She also has speech therapy twice a week to keep her skills on track.

“She is the same jovial little girl,” says Jennifer. “She’s a miracle.”