Engineer by day, drummer by night

Paul Franklin spends his days in the basement of Riley Hospital for Children overseeing the repair of lifesaving medical equipment.

As team lead in the clinical engineering department, he has found the perfect career in a place that means so much to him.

But there’s more to Franklin than meets the eye. Off the job he’s a drummer and songwriter for the Christian rock band Follower, which is set to release its third album, “Fly or Fall,” next month. 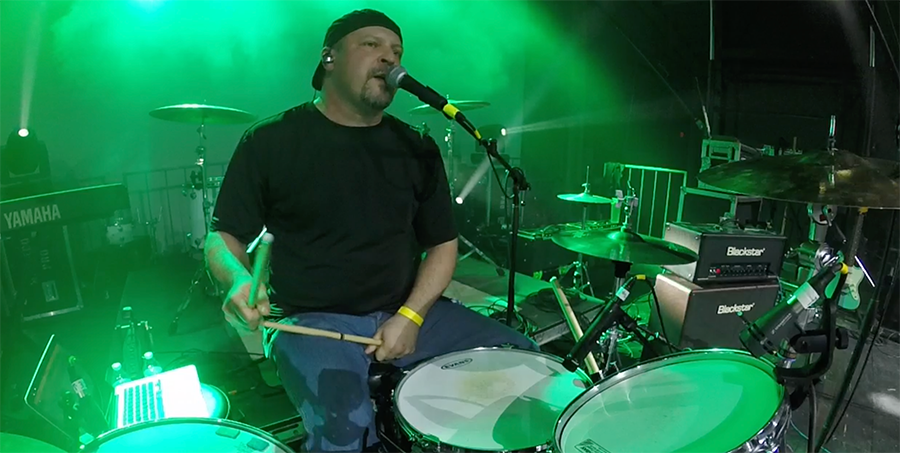 Now, Franklin wants to combine his passion for music with his love for Riley, specifically the Riley Cheer Guild and its music therapy program. He and the band will perform a benefit concert February 2 at Mount Auburn Methodist Church, 3100 Stones Crossing Road, Greenwood. All proceeds after expenses benefit the Cheer Guild.

Franklin, who says he landed a job at Riley more than 15 years ago “by the grace of God,” has been making music since he was about 6 years old. The son of a pastor, he practiced playing drums on the back of a broken guitar and began playing a real drum set in church, forced to “learn on the fly.”

It was after he lost his own son at birth that Franklin decided to give up his quest for a career in music and his job in the auto industry to strike out on a new path. He earned a degree in biomedical electronics and came to work at Riley.

“I knew I wanted to be around this special place because I felt that at the very least, I had the understanding of what fears a lot of these families and kids are going through,” he said. “It was healing for me to come here. I’m not a surgeon or a nurse or a doctor, so I’m not directly involved with patient care, but I’m working with the things they’re using, so it’s what I have to give.”

And when he saw the impact that the Cheer Guild and its music therapy program had on patients, he wanted to draw attention to the good that they do.

Music therapists are on the battlefield with kids, he said. “They’re the ones in the rooms, singing to the kids, teaching them music. That’s healing, they are promoting healing and spiritual wellness.”

It’s the same message the band is promoting with its music, Franklin said. “Caring for others, doing for others.”

Follower, which has won multiple awards from the International Music Entertainment Association, including Christian Group of the Year, doesn’t play typical church music. It has the feel of classic rock, mixed with modern music and a little smooth jazz.

The group embodies the mission of the Riley Cheer Guild to enhance the patient experience at Riley, said Ann Hannan, director of the Cheer Guild and the music therapy program.

“They are dedicated to music in their personal lives, so the music therapy program is a perfect match for their philanthropic work,” she said. “Their support will help to spread the word about the Riley Cheer Guild and create connections in the community for others to share their talents with Riley patients and families.”

Hannan will make a special guest appearance at the concert, singing one of the band’s new songs with them.

While not a performer per se, she said, “I’m excited to perform with them. They are a great group of guys and have welcomed me into their mission!”

Admission to the 6:30 p.m. concert is $8. Advance tickets are available at www.followerband.com.