Lopes’ career choice came naturally: Inspired to become a pediatric physical therapist in high school (after watching a close friend rebound back from a tragic car accident), she says she immediately felt connected to the calling.

She came from a different continent intent on changing children’s lives. Yet when Riley Hospital for Children physical therapist, Eli Lopes first moved to the United States from South America back in 1993 she braced herself for the worst. Challenged by a change in culture and climate, Lopes also couldn’t speak the language. ‘It was hard,” she says. Still, she persevered she says because, she truly wanted to help children.

Lopes’ career choice came naturally: Inspired to become a pediatric physical therapist in high school (after watching a close friend rebound back from a tragic car accident), she says she immediately felt connected to the calling. “My friend had suffered a serious head injury and I was really involved with the family at the time, doing whatever I could to help. Watching their physical therapist work was a powerful experience.”

It was an experience that prompted Lopes to attend Brazil’s Tuiuti University to specialize in physical therapy. “I received my bachelor’s degree there and got my training and certification afterwards specializing in cardiopulmonary care.”

Armed with her education, Lopes then signed on to work at a pediatric hospital in Brazil, spending her days in an intensive care unit. However, when a job unexpectedly sprouted up in the States at a Florida nursing home, Lopes was intrigued. “It was very different from what I had been doing and an exciting change for my husband and I,” she recalls. “So, I accepted the job.” 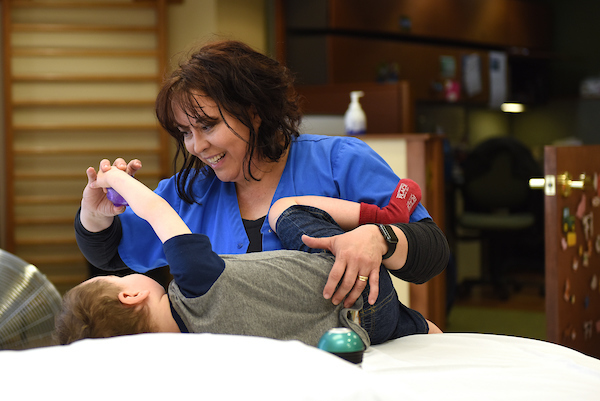 It wasn’t long, however, before Lopes began to miss kids. “So, several months later when IU Health approached me about a role at Riley, I changed gears.”

That was 22 years ago and Eli Lopes has never looked back.

“I really loved the cardiopulmonary part of the training I had so when I came to Riley I wanted to continue that,” Lopes says.

Becoming a mother also made Lopes look at her job differently.

“My son was born with chronic lung disease. Suddenly, I became a Riley mom--on the other side of the table. We were in and out of the hospital frequently. There were times when he even went into cardiac arrest,” she says. “It totally changed my perspective.”

Her son’s condition made Lopes more aware of the pulmonary patient experience in relation to the physical therapy program at Riley. “Having been on both sides of the experience as a clinician and a mom I immediately began to realize that we had this whole area that we were not tapping into. So, I became the point person for the pulmonary component for physical therapy at Riley.”

Ironically, she recalls, this collided with a time in her career where she was becoming frustrated.  “I’d have patients come in and they would leave and look the same and I’d think ‘why am I not getting the results I feel like I should be seeing?’ So, I started reading a lot of research and remembering all of the experiences I had with my son. All of those times where I had taught him how to move and use his brain when talking about how to best breathe with his lung disease. And I saw firsthand how this helped his ability to function. I thought, if scientists can do this in research and I tried it with my son, why can’t we do it here at Riley?”

And so, Eli Lopes made some changes.

“I began to read research on a regular basis and I switched the way I was using my hands with patients, the way I communicated with patients, I altered everything,” she says. “I had settled into a way of doing things, falling into routine. When people do that they end up not seeing the bigger picture.”

Little by little, the tweaks Lopes made began to take off.

“One of my patients, a 3 year old child, was throwing up every time he moved,” recalls Lopes. “So, I talked to the family about training his respiratory muscles based on the research I had encountered to help this child hold his head up and be able to better move. A few days later, this child was no longer throwing up and he could breathe better, hold his head up and sit with support while engaging in an amazing giggle with his mom. He also stood up with little help for the first time—it was amazing results.”

Today, the mother of three continues to work with pulmonary pediatric patients, though Lopes admits that most of her current cases are individuals with neurodevelopmental disorders. Still, she says she continues to pull her pulmonary training into every situation.

For Lopes though, it’s watching the smiles from her patients and their families that make her role at Riley well worth it.

“The best part of my job are my patients--to see their little eyes light up from doing something that people told them they would never do. I see that on a daily basis and it’s amazing, she says. “I wake up and think ‘who is going to be doing that today?’ And I truly love that part of my life. It’s huge—and that’s why I’m here.”