“I think sometimes we have to remind ourselves that what we do is pretty awesome. Everyone is facing their own fears, suppressing their own fatigue and their own frustration to do what needs to be done for these patients. It’s pretty amazing.”

Sarah Bevington laughs when she talks about being the “new kid” over at IU Health Methodist Hospital.

“It’s a weird phenomenon to walk in somewhere and be so unsure of yourself,” said Bevington, a nurse for 18 years. “It’s an experience I’ve not had in a really long time.” 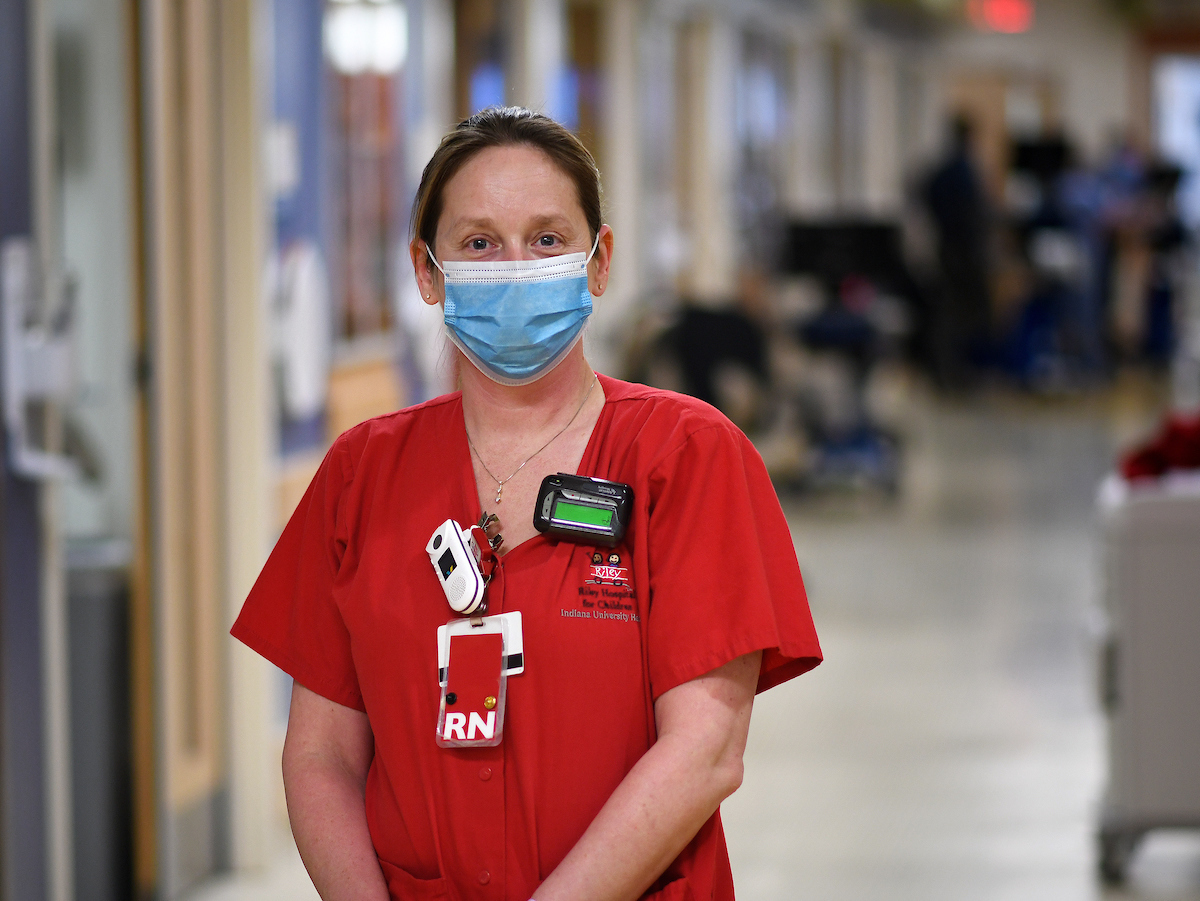 She has spent nearly two decades taking care of pediatric patients at Riley Hospital for Children. But several weeks ago, Bevington gathered her courage and volunteered to pick up shifts at Methodist caring for critically ill adult patients.

Uneasy doesn’t quite capture how she felt before that first shift supporting the ECMO team at Methodist.

ECMO stands for extracorporeal membrane oxygenation, considered the highest form of life support. It involves providing prolonged cardiac and respiratory support to patients whose heart and lungs are unable to provide an adequate amount of gas exchange or perfusion to sustain life.

“Most of my career has been in the neonatal ICU, so I’m terrified of big people,” Bevington said.

But the need was bigger than her fear, she reasoned.

Bevington became certified as an ECMO technician 12 years ago and knew her skills could help support the team at Methodist as they ramped up capacity to care for COVID-19 patients.

She and fellow Riley ECMO technician Brian Ludlum were tapped from among the Riley volunteers to receive training and orientation at Methodist, but they were not alone. About 15 IU Health clinicians from around the state stepped up to help the ECMO team.

Many of them are perfusionists, a specialty with similarities to an ECMO clinician. A perfusionist operates the cardiopulmonary bypass machine during certain surgeries. Those same skills can transfer to ECMO, and because elective surgeries were on hold for several weeks, those professionals had the flexibility in their schedules to help manage ECMO patients.

An ECMO circuit is a simplified version of a heart-lung bypass, said Tracie Layne, ECMO program manager at Methodist, but the equipment is a little different, “and certainly management of a patient in an ICU setting is very different from an operating room.” 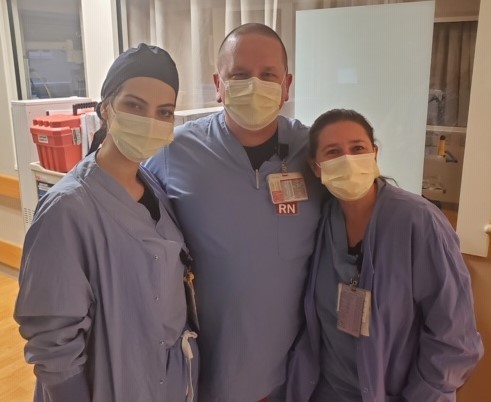 Despite the learning curve, perfusionists from the adult Academic Health Center in Downtown Indianapolis, as well as team members from Riley and IU Health hospitals in Bloomington, Muncie and Lafayette stepped up to the challenge, Layne said.

It represents another shining example of teamwork across the IU Health system, she said, and one she wanted to highlight.

“We’re just such a good team – everybody has their strengths,” she said. “Perfusionists are definitely experts when it comes to the equipment and the technical skills, but if something more specific is going on in the ICU, they can lean on our nurses and respiratory therapists. People can benefit from each other’s strengths.”

Shane House, inpatient ECMO coordinator at Methodist, said the willingness of others within IU Health to lend a hand where it’s needed speaks to the culture of the organization.

While there was a certain level of intimidation early on for some team members, it was a call to action, Layne said. And the anxiety was addressed by sharing as much information as possible.

“Knowledge will always decrease your anxiety. And the more people learned how we were going to manage and cohort the patients, looking at how the organization was guiding us through that in terms of our PPE and other things, that helped diminish the fear.”

The warm welcome they received from the Methodist team also went a long way.

“All of the nurses are beyond fantastic to jump in and help in any way,” said Bevington, who has worked multiple shifts at Methodist while also continuing to work at Riley. “It’s just been incredible to be a part of their team.”

Even after working in the adult world for several weeks now, Bevington acknowledges that it’s still a little scary going into the hospital, but she is glad she volunteered to help.

“If the tables were turned, I think they would bend over backwards to come over and help us.”

Layne has appreciated the Riley team’s willingness to pitch in.

“They know ECMO well, but with adult patients, it’s a little different. Even our equipment is a little different,” she said. “But they really stepped up to that challenge and gave their time to come to Methodist and learn our system and go through labs and shadowing at the bedside to get up to speed. It’s been very nice to have them.”

Allie Stewart, a nurse in Methodist’s cardiovascular critical care unit for five years and an ECMO clinician for three, appreciates the help from all the hospitals.

“It’s great that they can come in and support our team so we can flex up to these large volumes of patients,” she said. “They can be there to back us up and have eyes everywhere.”

The COVID pandemic came on the heels of this year’s flu season, so it’s definitely been a tough few months, Stewart said. She has been working 50-60 hours a week taking care of COVID patients on ECMO, and not doing much else.

She misses seeing her parents but doesn’t want to risk spreading the virus. So she counts her Methodist team as her family.

“Everybody at work has been super supportive of each other, staying positive, making sure everybody has what they need and making sure we are giving the best patient care that we can give under these circumstances.”

For Layne, seeing her team and others around the system respond to the challenges presented by the virus is inspiring.

“I think sometimes we have to remind ourselves that what we do is pretty awesome. Everyone is facing their own fears, suppressing their own fatigue and their own frustration to do what needs to be done for these patients. It’s pretty amazing.”