​Dr. John Brown on his young patient: “He is a tough little guy”

Six-month-old James Guzman has never been outside the walls of a hospital. But after four major heart surgeries and another one to go, he’s impressing his medical team with his strength.

At six months old, James Guzman can’t appreciate all the fuss being made around him.

Sitting in his bouncy seat in his crib at Riley Hospital for Children, he is mesmerized by Mickey Mouse on TV and resists attempts by his dad to get him to smile.

He doesn’t understand what a complicated case he is. He doesn’t know that he’s been under the care of a world-class surgeon, who has been proceeding carefully to correct the multiple heart defects that threaten the boy’s life.

Pediatric heart surgeon Dr. John Brown knows how the odds were stacked against little James from the moment he was born last March at IU Health Methodist Hospital.

“He has so many things wrong with his heart, six major cardiac malformations,” Dr. Brown said. “Of those, we’ve repaired all but two.”

James has had major procedures at the age of one week, two months, three months and five months, “and we’ve still got a ways to go,” Dr. Brown said. “He’s going to need another major open-heart operation in the next month to six weeks.”

That will be a repair of everything on the inside of his heart, but the medical team is waiting for him to get bigger and for his oxygen levels to improve so he can better tolerate the surgery. 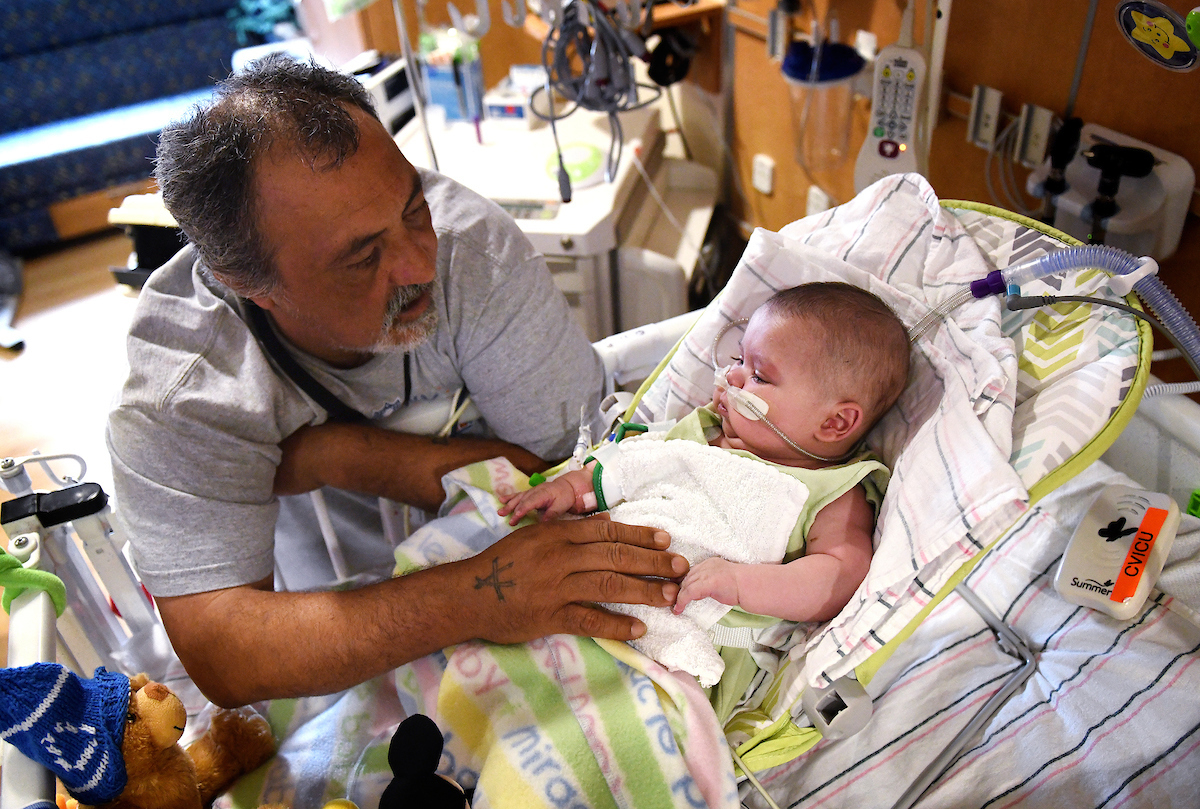 James has been hospitalized at Riley since shortly after his birth at Methodist. His parents, Sam and Francesca Guzman of South Bend, have watched as their son has been wheeled into the operating room no fewer than nine times in his short life.

One procedure in the heart catheterization lab sent him into cardiac arrest. He’s been on heart-lung bypass three times.

“He is a tough little guy,” Dr. Brown said. “His biggest problem right now is his blood oxygen level is lower than we’d like it to be, and he’s outgrowing the connections we’ve made to get blood into his lungs.”

James was born without a valve from his heart to his lungs (pulmonary atresia), so Drs. Brown and Jeremy Herrmann had to create one. It’s a surgery Dr. Brown has done many times in his 40-year career, but James is especially challenging because he has so many heart defects packaged in one tiny body.

Dr. Herrmann has worked alongside Dr. Brown on each of the heart procedures to date. Seeing the complexity of problems in one patient is good training, Dr. Brown said.

“Jeremy and I have tackled each one of them, taking them one at a time, and we’ve been able to get him through all of them.”

James will eventually outgrow the tube connections the surgery team made between the right ventricle and the lung artery, so that valve will have to be changed again. In his lifetime, it might need to be replaced another two to four times as he grows.

James also suffers from heterotaxy syndrome, which occurs in four out of every 10,000 births. The congenital heart defect exists when the organs in the chest and abdomen develop on the opposite side of the body from their normal location. Heterotaxy can affect multiple organs, including the heart, lungs, liver, stomach, intestines and spleen.

While Dr. Brown has seen complicated patients like James before, he is the most recent to require so much intervention. The key is to approach the repairs in stages, he said.

“You can’t do a complete correction on a child like this all at one time. You have to go step by step.”

And while he’s optimistic that he can get him through all of the repairs he needs, James may be in the hospital another three months in order to get it all done.

Already, James has missed so much, said his dad, who has four older children who live hours away. 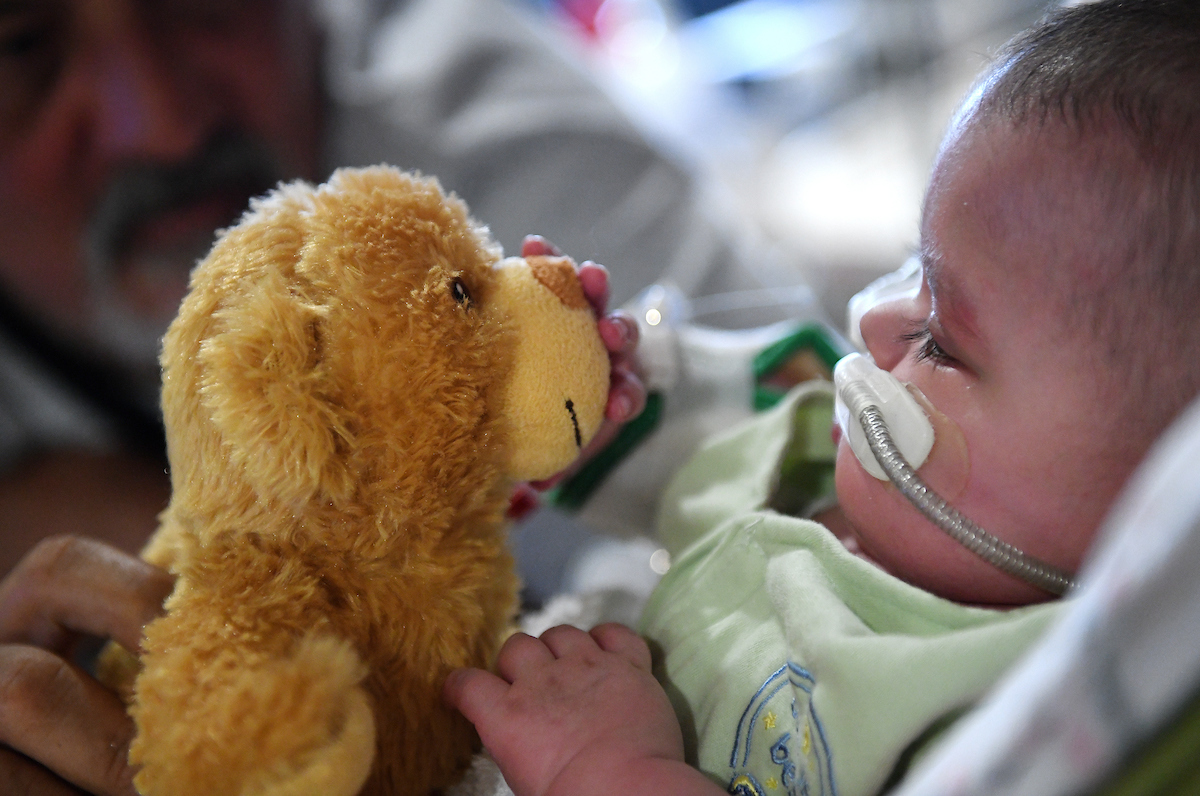 “By now he should be on the floor having tummy time, trying to reach for things,” Sam Guzman said as he entertained his son with a stuffed puppy. “He should already have some mashed potatoes in him and know what it feels like to go outside.”

While James’ parents have stayed close to him throughout his ordeal – they are living in the Ronald McDonald House – it’s hard to be away from their family in northern Indiana.

There are good days though, Guzman said.

“Every time I walk into Riley Hospital and I see my baby, that’s a good day.”

Despite the complexity of James’ case, Dr. Brown is encouraged by the fight in his young patient.

“Based on other children over the years, we know that if we take these surgeries step by step, we can get these kids through.”