‘Do you know how lucky you are to work here?’

For NICU nurse Stacia Nickell, it’s a privilege to be part of the Riley team.

When Stacia Nickell was new to her nursing career at Riley Hospital for Children at IU Health, a young physician said something that she would not fully understood until years later.

“Do you know how lucky you are to work here?” That’s what she remembers neonatologist William Engle saying to her. He explained how amazing Riley is and what a privilege it is to be part of the hospital team, she said.

That was 30 years ago, and both Nickell and Engle are still here – working in the NICU.

“I think that has always stuck with me – gosh, I’m really lucky to work in this place. We have so many specialists, so many people working together to do the right thing. It makes me want to do the best I can for the people who are here,” Nickell said.

For 31 years, Nickell has been a nurse in the NICU at Riley. She’s worked at bedside, as a charge nurse and, most recently, as shift coordinator. Several years ago, in one of her most challenging but most rewarding roles, she helped orchestrate the NICU’s move from large, open rooms with multiple patients and nurses working together to the new private rooms in use now at Riley.

That was a culture shock, she acknowledged. It changed how nurses train and how families interact. But she loved handling the logistics of the move, embedding herself on the unit while construction was still going on, and outfitting the NICU and other units with supplies before each move was complete. 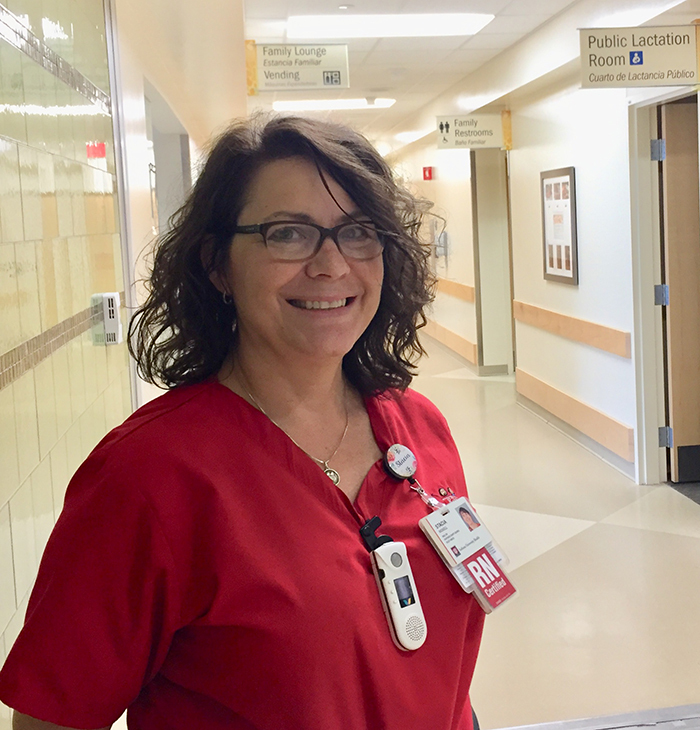 Obviously, she has a gift for organization, but in her mind it’s about helping people see possibilities. That’s what her career with Riley has been all about. She is sandwiched amid three generations of family who work at Riley. Her mother works in guest services, and her daughter is a secretary in the unit.

She and her husband, Mike, have four grown children. Until a grandchild enters the picture, they are exploring new hobbies, including cooking and making cakes for special occasions. She’s working on one for her nephew right now – an elaborate tiered cake with fancy flowers.

One of her good friends in the NICU, RN Susie McSwain, persuaded her to go on a girls’ trip this spring. The two regaled the nurses back home with photos from their “Thelma & Louise”-style vacation. Just like the 1991 film, the two traveled in a convertible, went to a bar in the desert and “shot some guns,” Nickell said, laughing at the memories.

They hiked in Red Rock Canyon, rode a dune buggy and posed for pictures in a fake jail in one town.

The two nurses have worked together pretty much their entire careers. They bonded in the early years when they cared for tiny surgery babies in the old NICU modules. They know they can count on each other.

“Stacia is a jack of all trades,” McSwain said. “That girl can do anything, and she knows everyone. We walk down the hall, and it seems like there’s not anyone in the hospital she doesn’t know.”

She comes across as tough, McSwain said, “but she has the biggest heart. She’s very dedicated to our unit.”

Nickell has traveled to Africa twice with Dr. James Lemons, a Riley neonatologist who founded a children’s hospital there. Those medical mission trips, while gratifying, can be “heartbreaking and humbling,” she said. “It leaves you wanting to do more.”

After three decades, Nickell said, she now has two families – her Riley family and her real family.

“A lot of the physicians either started when I did or have been here since I came and we’re all old now. We joke around a lot. We’re serious about the work that we do, but we also care about each other. This feels like home.”