Four-year-old Deacan, who is being treated for cystic fibrosis, loves dinosaurs, motorcycles, music and … broccoli.

Deacan Kesner has just woken up, so he’s a little shy at first, but my goodness, that smile.

The 4-year-old is sprawled on his bed on the eighth floor of Riley Hospital for Children, where he is nearing the end of a two-week stay for a cystic fibrosis “tune-up.” It’s the sixth one this year, so it’s been rough on the boy and his mom, Kaila, yet you wouldn’t know it to talk to them. 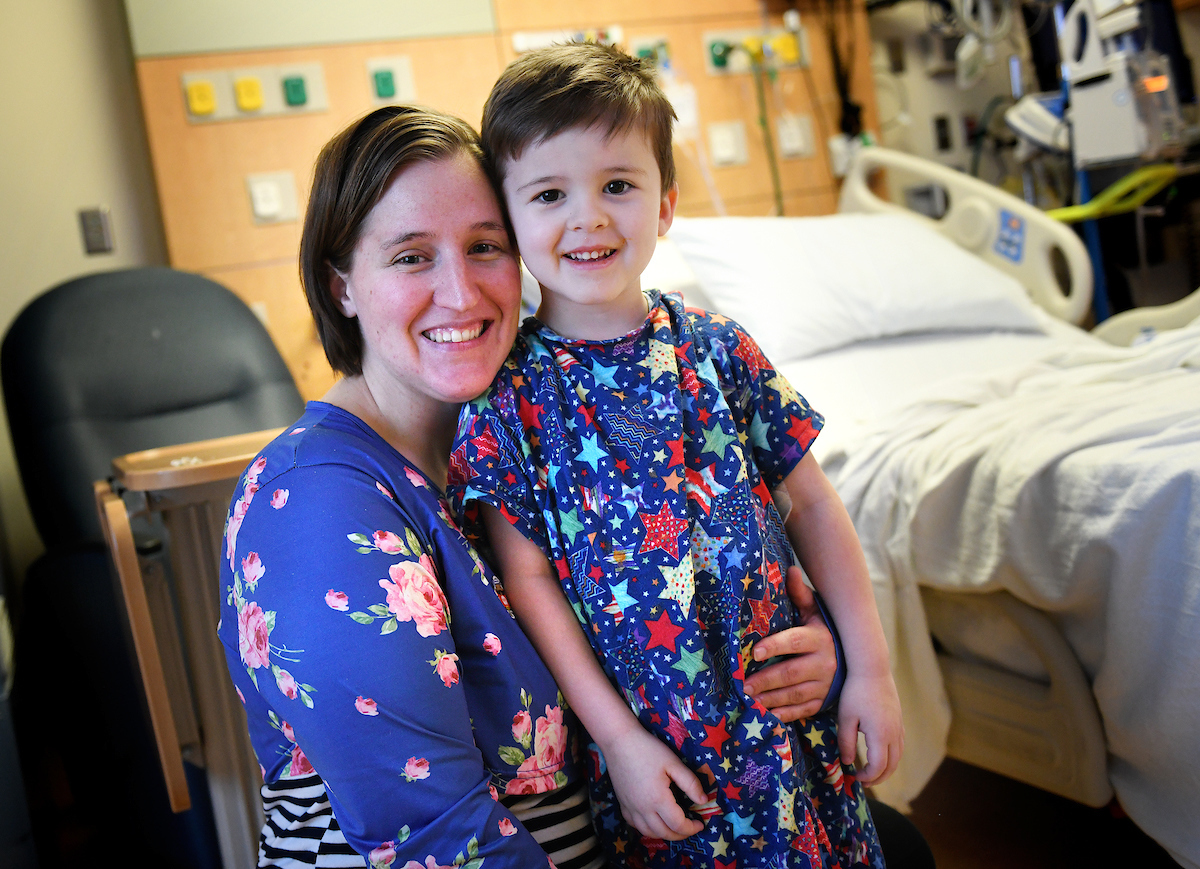 Kaila Kesner sleeps on the fold-out couch in her son’s room, while her husband, Chris, holds down the fort at home in Terre Haute, caring for the couple’s three other children, ages 8, 3 and 17 months.

Both Chris and Kaila are in the U.S. Air Force and work at Hulman Field in Terre Haute. Kaila is pregnant with their fifth child, due in May.

It’s a lot for any family, especially when you throw in a serious illness like cystic fibrosis, but Kaila prefers to count her blessings.

Blessings like the nurses who love Deacan – taking him for night rides on his trike through the empty hallways – and the child life specialists and therapists who keep him active with fun exercises, art activities, music and play during his hospitalizations.

That’s why it was so important to Kaila and Chris that the Blue Knights Motorcycle Club, of which Chris is an honorary member, raised $2,000 during its annual charity ride earmarked for 8 West at Riley. The money will help support the child life program, music therapy and toys and books for the kids on 8 West, among other things. 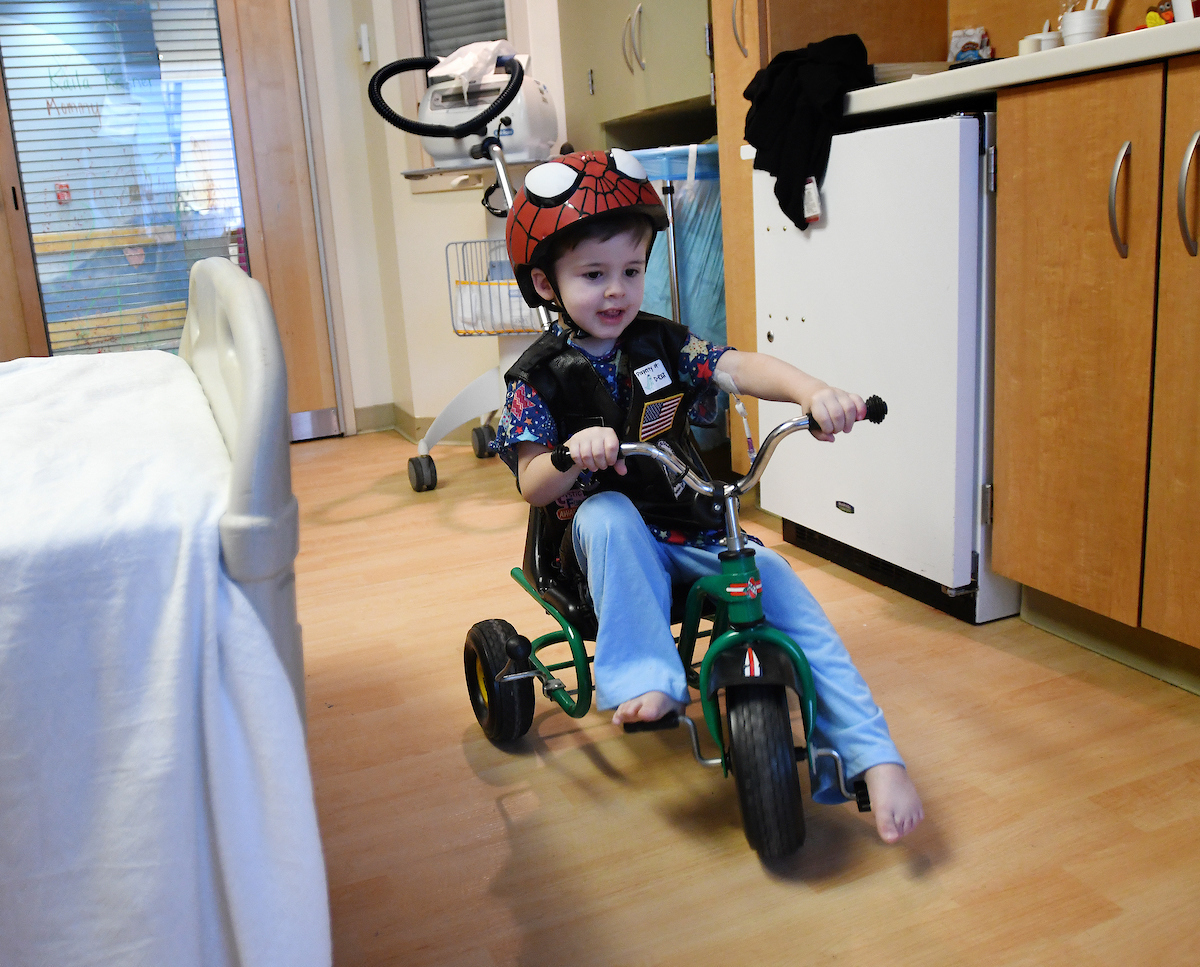 The Blue Knights gave Deacan his own custom leather vest that he proudly shows off in his hospital room. With a little encouragement from his mom, he slips the vest on over his pajamas, dons a Spiderman helmet and takes two fast laps around the room on his three-wheeler.

During the charity ride last summer, he had a front-row seat to the action as he sat in front on his dad’s motorcycle while the Blue Knights roared by, revving their engines, honking their horns and waving to Deacan. They even made him an honorary road guard.

The ride to benefit CF is a great way to bring the community together, Kaila said. “It’s important because it brings awareness to a disease that is not as commonly known,” she said. “This year, we were able to get 30 bikes so it was one of the better rides they’ve done. We’re hoping next year it will be even bigger.”

As she talks, she’s showing photos of the ride, photos of a grinning Deacan. 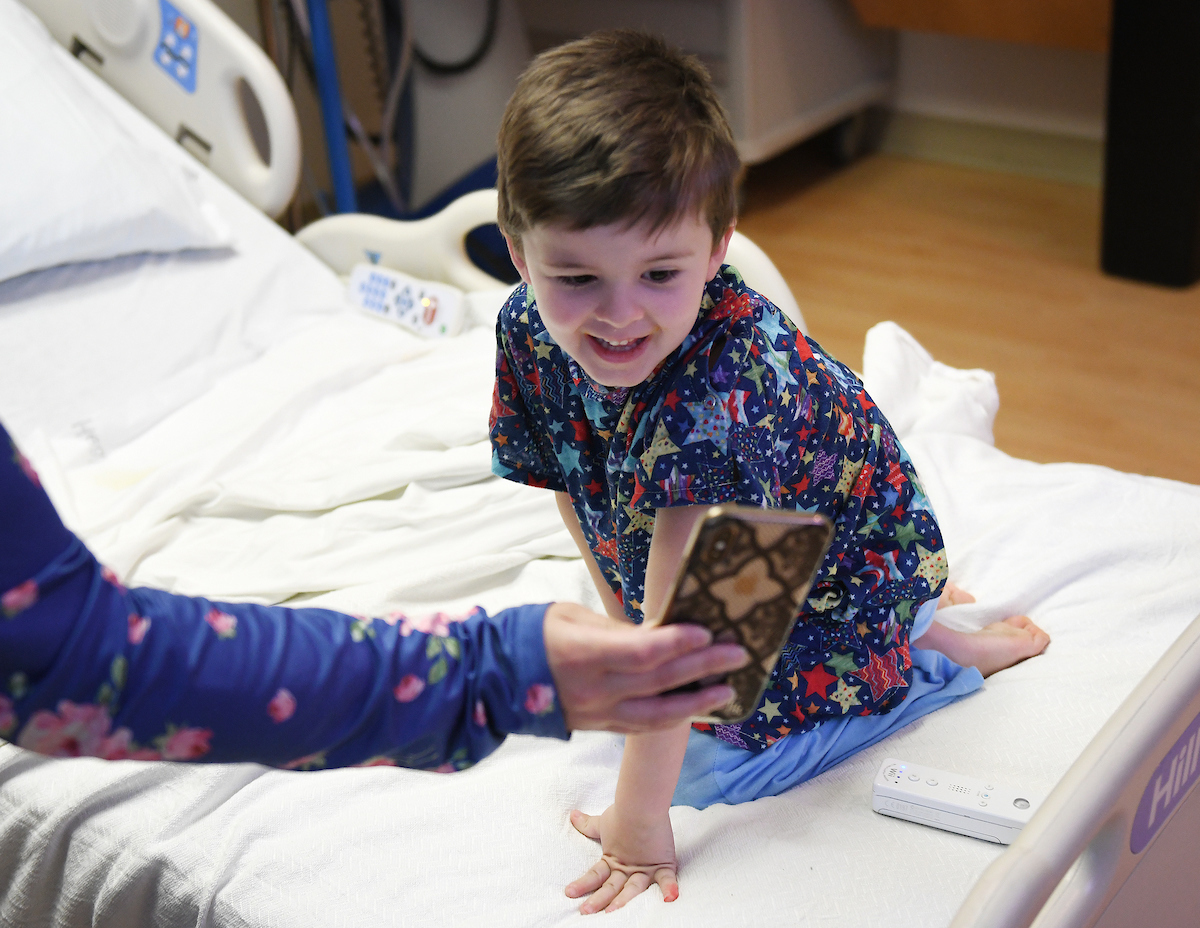 Kaila and Chris were among those who knew nothing about CF when Deacan was born 4 ½ years ago. They didn’t know they were carriers of the CF gene until their son was diagnosed.

“It was completely foreign to us. When we found out he had CF, I was actually holding him for the first time – he was about five days old and we were sitting in the NICU,” she said.

Deacan had been LifeLined to Riley from a Terre Haute hospital shortly after birth because he had suffered a perforated colon during labor and he became septic. It would be three weeks before his parents were able to bring him home.

But that CF diagnosis while they were at Riley was a significant blow. CF is a hereditary disease that affects the lungs and digestive system. The body produces thick and sticky mucus that can clog the lungs and obstruct the pancreas. People with the condition tend to have a shorter-than-normal life span.

“As the doctors were explaining it, my heart started to sink and I realized this is a life-threatening illness,” Kaila said.

But in that despair came another blessing. Deacan’s particular CF gene mutation was so rare that he was eligible for a new drug treatment as part of a research study before he was 2 years old. Kalydeco works by easing the transport of salts and water in and out of cells to improve hydration and mucus clearance.

His parents hope that by participating in this study and others, Deacan can help other kids down the road. Of their four children, Deacan is the only one who has CF. Their youngest child is a carrier like the parents, and the other two are not carriers. Kaila’s unborn baby has a 25 percent chance of having the disease.

Deacan is a pretty agreeable patient. When the nurse comes in to get his vitals and give his medicine, he is active in his own care, assisting her at every step.

He used to get scared when they would have to change the dressing on his PICC line because the tape pulls at his skin, she said. “But this last time he didn’t even cry. He’s my brave boy.”

Like most boys his age, Deacan loves dinosaurs – his nickname at Riley is “D-Rex.” He also likes Super Mario Brothers, cars, movies and music. He watched “Chitty Chitty Bang Bang” this visit and loved it, his mom said. But “Fantasia” is by far his favorite.

Deacan doesn’t have much of an appetite because he gets a nutritional formula through his G-tube at night, but he does have a favorite food. It’s not pizza or chicken nuggets or pancakes. It’s steamed broccoli dipped in butter.

“Whenever we go to restaurants, I always get an extra side of broccoli for him and that’s all he wants,” Kaila said. “Just keep the broccoli coming.”