For 21 years, Teresa Ray has volunteered to keep the toys flowing to young patients.

When Teresa Ray traded her office manager job in the private sector for the new title of “CEO” of the Riley Cheer Guild Toy Room, it was the best career move she ever made.

Ray is the senior member of the Toy Room troupe of volunteers. She’s been at it for 21 years, so she knows her toys.

“We couldn’t do what we do without her,” said Susan Schwarz, volunteer coordinator at Riley Hospital for Children at IU Health. “She does everything; she really is the CEO of the Toy Room.” 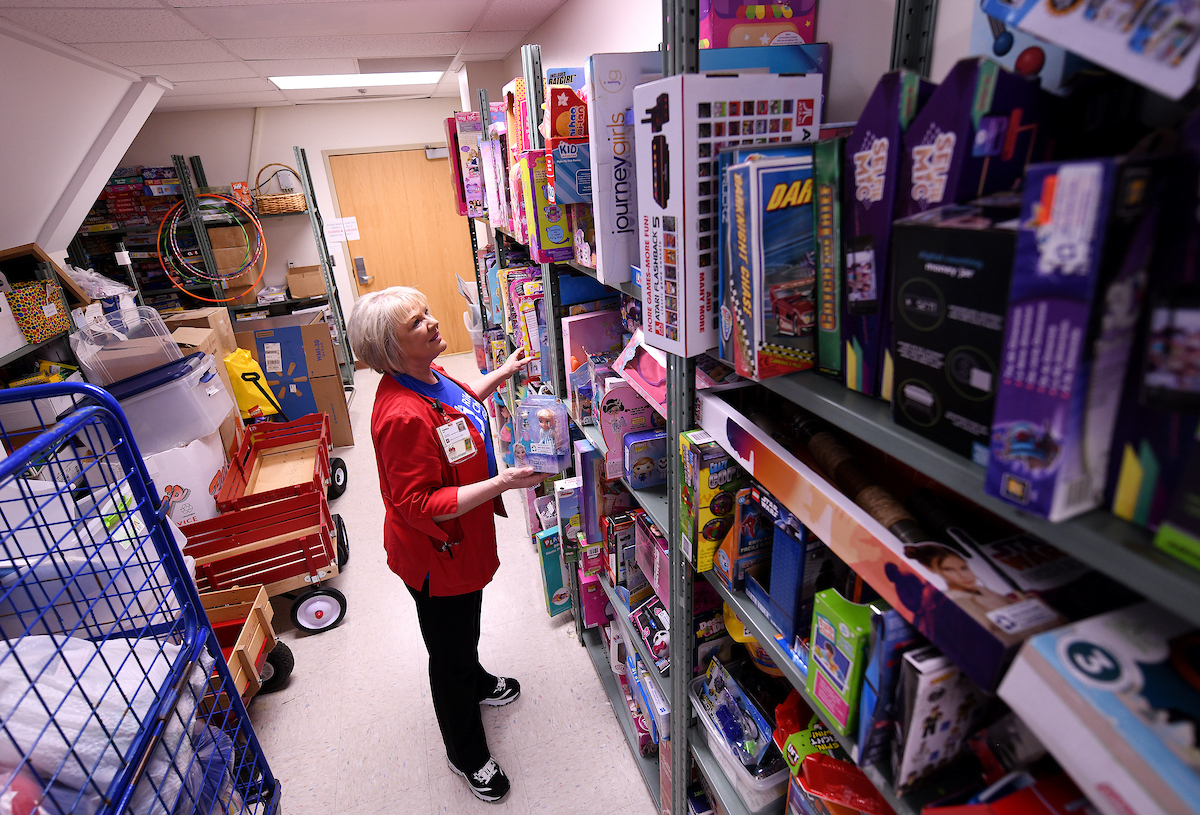 It’s just one of many hats that Ray wears in life. She’s also a wife, mother of two, grandmother of five and a full-on Disney fanatic. To that last point: Minnie Mouse is her favorite character because she’s always happy; the family has been on so many Disney vacations over the years that Teresa and David Ray’s youngest daughter went to work for Disney as a vacation planner; and Mickey and Minnie welcome visitors to the Rays’ Greenwood home thanks to a decorative plaque given to them by a neighbor.

If Disney’s Magic Kingdom is the happiest place on Earth, Riley’s Toy Room might be a close second – if only for the thousands of donated and purchased toys just waiting for their chance to bring a smile to a child’s face.

Every month, more than 10,000 toys hop off the shelves in the Toy Room – tucked up on the fourth floor of Riley – and into the arms of child life specialists and nurses who distribute them to patients.

In years past, Ray and her team used to get joy from loading up carts with toys and delivering them to children room to room, but policy changes designed to protect patients put an end to those trips. 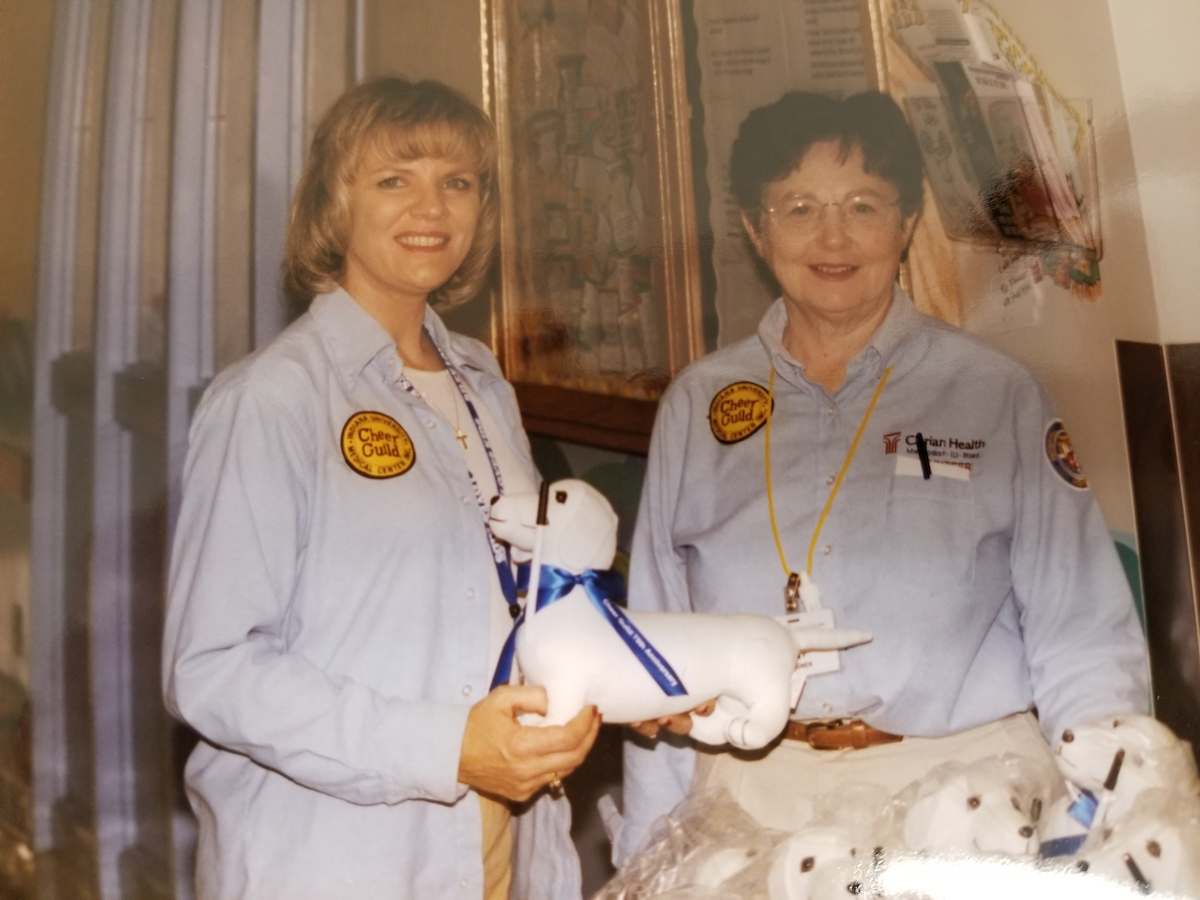 “Those were fun days,” Ray said, “but it’s nice to do outpatient center gift days. You never have a day that goes by that somebody doesn’t thank you for what you’ve done for their child. They may have had just a terrible day and they get a little toy and it makes their child’s day. It’s good to hear those things, it’s what keeps you coming back.”

Now, Toy Room volunteers inspect every toy that comes into the room to determine if it meets safety standards before tagging it and putting it with like items in the cramped headquarters. Then team members who work in the units can select toys as needed.

While not everything makes the cut, Ray said most donated toys, games, books and crafts will find their way to young patients. Items must be new and in their original packaging. A Wish List details the most popular donations.

When Ray first became a Riley volunteer, she said she felt an instant connection to the people and to the mission.

“This was home. I felt very comfortable, and I felt needed.” 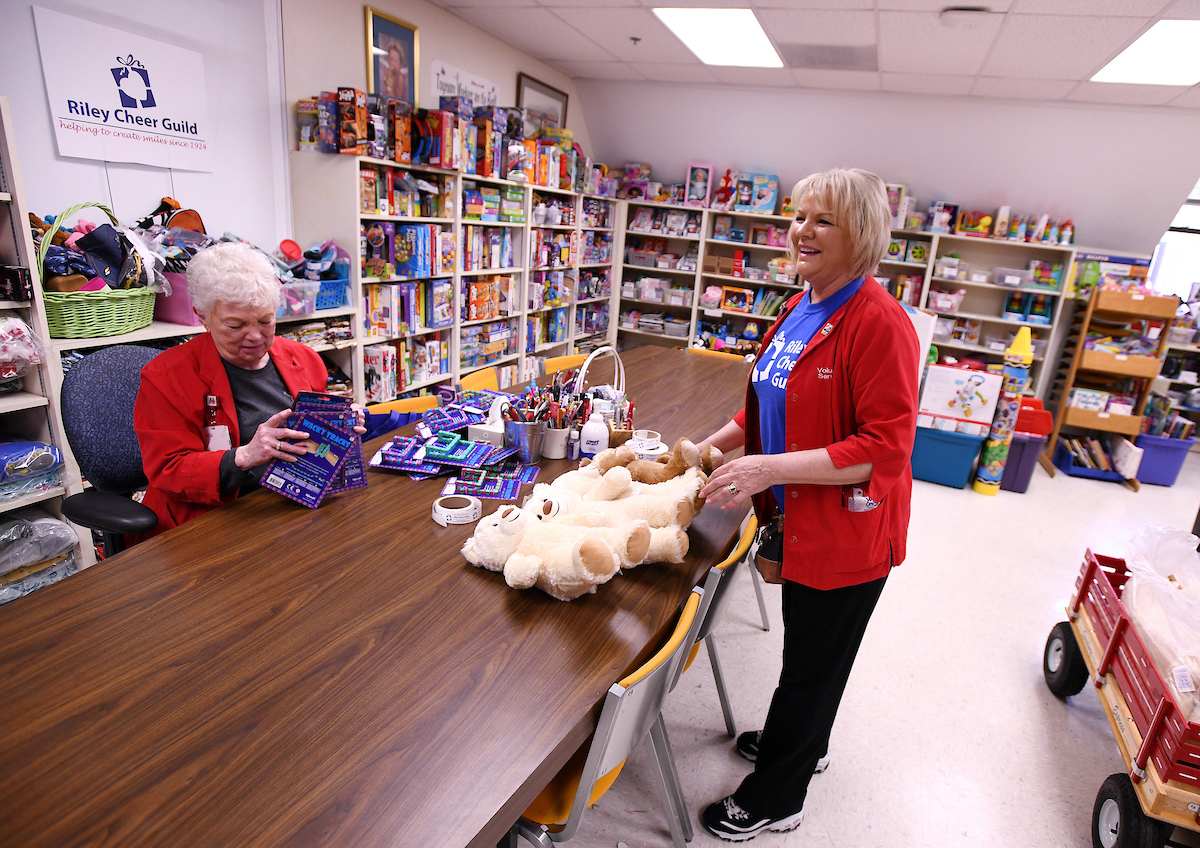 Since those early days two decades ago, she has served many years on the Riley Cheer Guild board, including multiple stints as president. Cheer Guild members can be found throughout the state, all donating time, money and talent to the Guild and the Toy Room.

Volunteer Gretchen Sullivan can be found in the Toy Room every Tuesday, sorting and tagging toys. She looks forward to this day every week.

“Riley is my special day,” she said. “I love to come here. I get to see all the nurses, the volunteers and the people who give to the hospital.”

Her husband spent much of his youth at Riley being treated for polio, she said, so this is her way of giving back to the place that cared for him.

For Ray, it’s volunteers like Gretchen, patients and Riley team members who make her glad she made the decision to walk through the doors of Riley 21 years ago.

“I’m paid in love and friendship triple times over.”