Lindsay Terry and Angel Gaskins forged a friendship on the job 20 years ago.

They were practically babies when they started working together. Angel was just 18, and Lindsay was 21.

They met in the Cancer Center at Riley Hospital for Children at IU Health, and the two formed a bond that has endured for nearly 20 years now.

They are each other’s “person,” as the fictional character Meredith Grey likes to say on the TV medical drama “Grey’s Anatomy.” And yes, they watch the show religiously.

Angel Gaskins and Lindsay Terry are nurses on the fifth-floor Cancer Center at Riley, where they deal with so many emotions pretty much every day – joy and sorrow, hope and fear.

They have been witness to the marvels of new cancer treatments that have saved the lives of so many young patients, and they have grieved together when sick kids could not beat the odds.

Through it all, the two have faced each day with a sense of resolve to do their best for their patients but to also find the joy and humor in difficult situations. 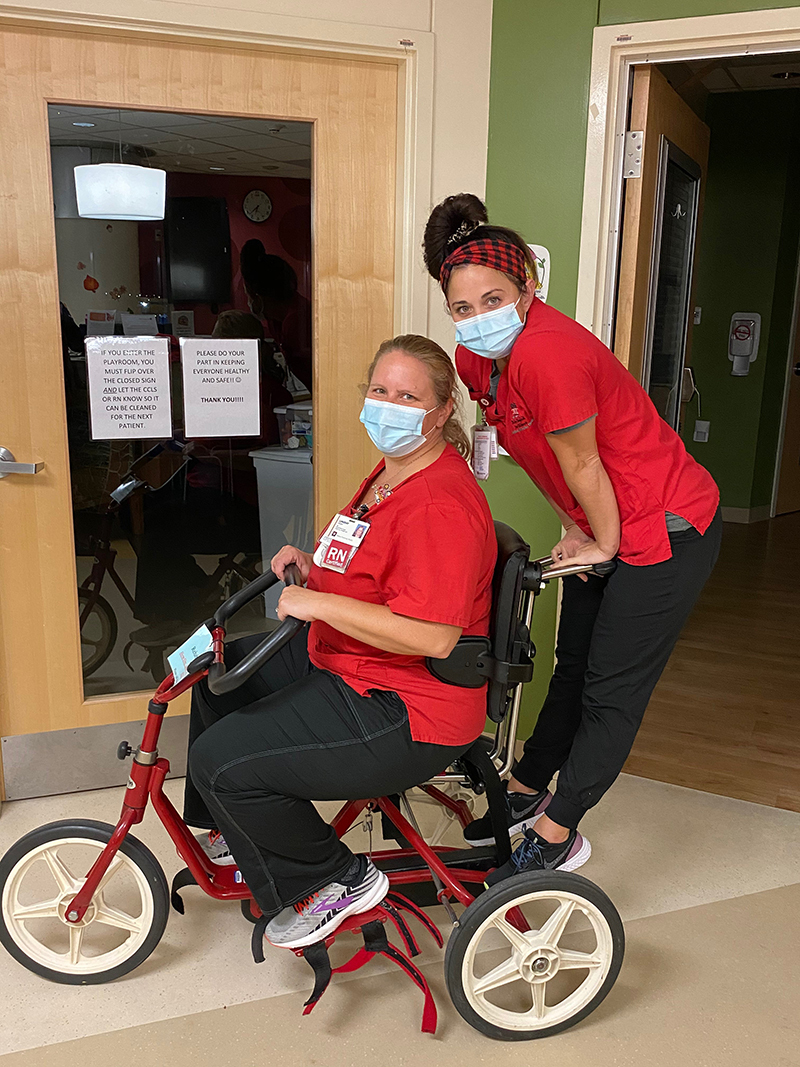 So it was that a couple of weeks ago, when circumstances found them both working the night shift, they climbed aboard a Riley trike and wheeled down the hallway at 3 in the morning.

Gaskins usually works nights and Terry works days, but that hasn’t stopped them from always being present in each other’s lives.

“Lindsay was very quiet when I first met her, and I’m not quiet at all,” Gaskins said with a laugh. “I think I just started talking to her and wanted to know more about her. We were both young, I was 18, she was 21. I’m thinking, ‘I want to talk to this girl, she seems pretty cool.’ So I continued to bother her.”

Terry was in nursing school at the time and knew she wanted to work at Riley. A recruiter said the stem-cell unit needed help, so she applied and started working weekends while going to school. It was all pretty new and exciting 20 years ago, but she was in serious study mode at the time, she said.

Still, it didn’t take long for the two to forge a friendship.

They became roommates and lived together for several years before Gaskins got married. In fact, Terry introduced her friend to the man she would marry. That man, Mike Gaskins, went to high school with Terry.

“We’ve helped each other through some rough years,” Terry said. “And we’ve grown our families together.”

While having kids can complicate friendships, Terry believes her friend’s heart reflects her name.

“Angel will do anything for anyone. She’s just kind.”

Gaskins said her friend is the kind of person who is always there for her.

“We can talk about anything at any time of day. And as far as work goes, we depend on each other,” she said. “To know that that person understands what you’re talking about or has been through that situation … we’ve been through rough times and heartache. We’ve seen each other at highs and lows. You just can’t even explain it; you’re just able to connect on so many levels, without even talking sometimes.” 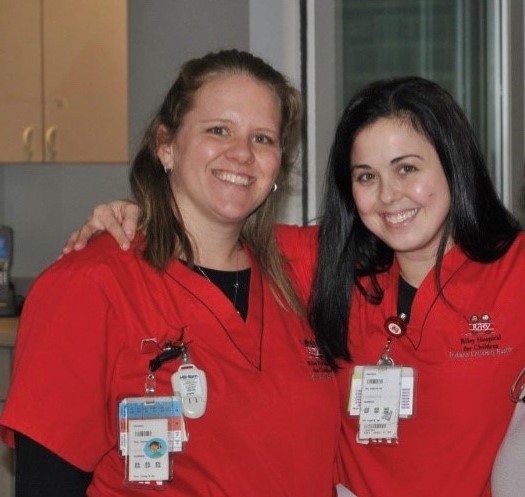 Working as nurses in the Cancer Center requires a level of compassion and empathy that comes naturally to these two. And caring for kids is a joy, they say.

For Gaskins, who announced at her kindergarten graduation that she would be a nurse someday, seeing the good even in bad situations is important.

“That’s what I love about Lindsay. She can see the good moments in spite of all the trials. We can both be a light in these kids’ lives and have fun and joke with their families and make them more comfortable,” Gaskins said. “When we’re both doing that together, it makes it fun, even for our co-workers. It improves the atmosphere.”

Neither can imagine life without the other. In a word, it would be boring, they say.

Back to “Grey’s Anatomy,” the two laugh at some of the plot points of the show but understand how the bonds that form in a high-pressure job can make a difference in your ability to be your best.

“You can definitely call Angel my person,” Terry said. “She has been my person for so long. The bond we have is crazy.”

And working together in the Cancer Center, where they rejoice in the advancements they’ve witnessed in pediatric cancer care, is where they want to stay.

“We’ve seen the outcomes change; more patients are surviving with fewer side effects. And kiddos are going on to live good-quality lives after (stem cell) transplant. Fifteen years ago, they didn’t do that,” Terry said.

“To see those things happen and how it changes the way you work as a nurse and the way your patients are cared for … all of that stuff is what keeps me here,” Gaskins said.

That and an unbreakable bond with her friend of 20 years.