Keegan and Maddox O’Connor battle mitochondrial disease, a rare disorder that has no cure. But their love for each other and their family gives them a special kind of strength.

The two brothers might be separated by 13 years, but they are united by a painful, debilitating disease … and their love and concern for each other. 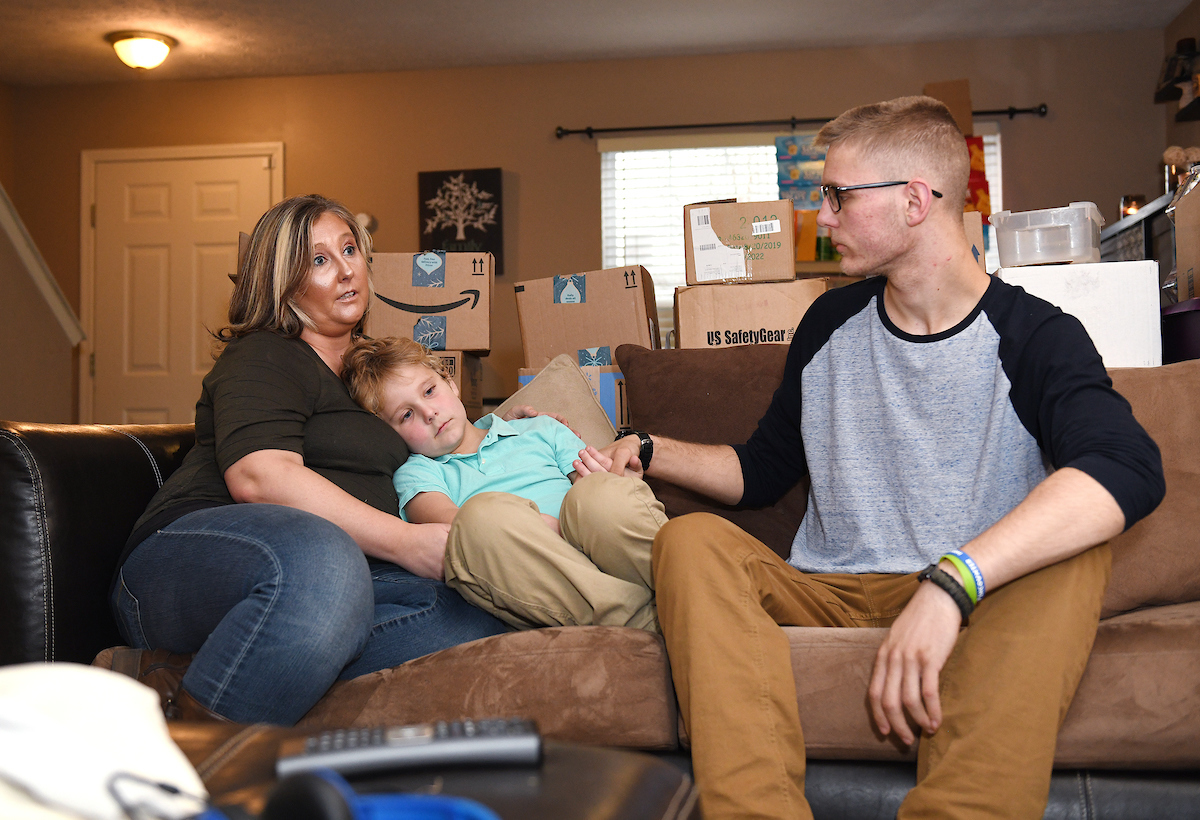 Keegan O’Connor, 21, and Maddox O’Connor, 8, sit side by side on the couch in their Fishers home, listening as their mom, Shawn O’Connor, describes what it’s like having two children who are living with mitochondrial disease, a rare, inherited disorder that has no cure. Symptoms differ for each brother, but they include muscle weakness, pain, fatigue and developmental delays.

Mitochondrial disease is difficult to diagnose, because it affects each individual differently. More serious cases can lead to seizures, strokes and an inability to walk, talk, see and digest food. The parts of the body requiring the most energy, including the heart, brain, muscles and lungs, are primarily affected. That’s because mitochondria are key to creating 90% of the energy needed by the body to sustain life.

Keegan, the second oldest of Shawn and Ian O’Connor’s four children, was 12 before he was diagnosed with a neuromuscular disorder, with probable mitochondrial disease, at Riley Hospital for Children. Though he had symptoms that suggested mitochondrial disease, doctors weren’t convinced because he was walking, talking and growing. But his mom remembers how he was sick a lot because he had no immune system and he had horrible asthma.

“It was an unknown battle that Keegan was fighting his whole life,” she said.

But his diagnosis at 12 made it a little easier to understand what was happening to his brother Maddox when he was born.

“At the time Keegan started having symptoms 20 years ago, we knew less about mito than we do now,” Shawn said. “When Maddox was 8 weeks old, our pediatrician noticed something was really wrong and called Dr. (Joseph) O’Neil in developmental peds at Riley.”

Describing Dr. O’Neil as “the most amazing human being I’ve ever met in my life,” Shawn said the physician examined her son and gave the family the news that his condition certainly appeared to be mitochondrial disease, but they couldn’t do certain muscle tests to confirm the diagnosis until Maddox was 2. Today, Maddox has a clear mitochondrial diagnosis, she said. 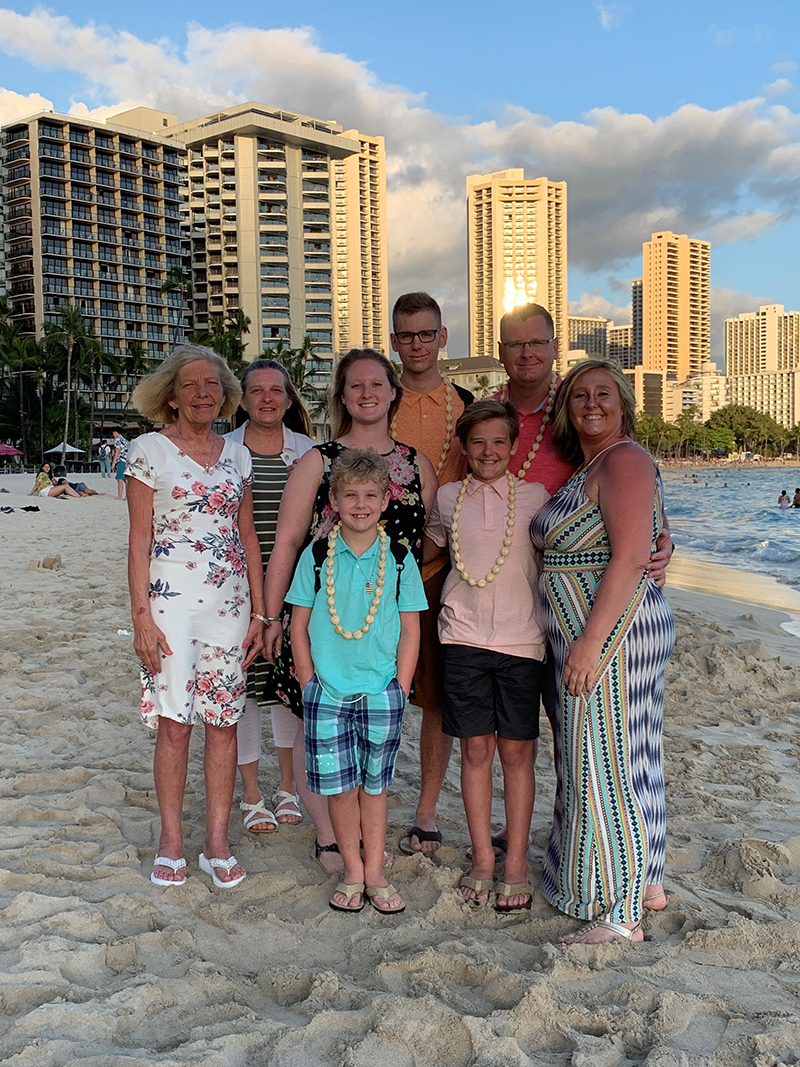 With Maddox’ diagnosis, it became more evident that the brothers shared a genetic component, so their siblings were tested. While they all have some gene variant, 13-year-old Caleb and 22-year-old Emily are non-symptomatic, Shawn said.

“They don’t know what other gene kind of flipped its switch for Keegan and Maddox to become symptomatic.”

Today, Keegan is a strapping young man with a military haircut, military boots and the firm handshake and politeness of a member of the armed services, though he is not in the service. He deals with muscle and bone pain, as well as fatigue, but says he has learned to push through these limitations.

Due to developmental delays attributed to the disorder, he is not fully independent yet, but he understands more than most people the values of love, kindness and compassion, his mom said. He earned a certificate of completion from Hamilton Southeastern High School and works part-time in an after-school program. He is hoping to get his driver’s license soon.

He and his brother are close, though sometimes Maddox’ exuberance is a bit much for Keegan. But his little brother’s big personality is just what the 8-year-old needs as the driving force behind a special ministry he was inspired to start while traveling back and forth to Riley over the years.

You have to look no further than the O’Connor living room to see what Maddox’ Mission is all about. Boxes and boxes are stacked high in the front room – filled with toiletries, hats, gloves, hand warmers, snack foods and water. The items are destined to be placed in the hands of the homeless – those people Maddox noticed on the streets and near bridges Downtown on his frequent trips to Riley.

It started with an extra lunch that Maddox would pack before leaving for his appointments at Riley a few years ago. He would hand it to whomever was standing outside, often on Indiana Avenue near the hospital.

But he wanted to do more.

“One day he started getting sad and he was crying, and when I asked what was wrong, he said he understands what the homeless are going through,” his mom said.

His is a world of sickness, but he is surrounded by a love that never fails.

“When I come to Riley, I have my mom and my dad and my sister and my brothers to tell me they love me every day no matter what I’m going through,” the third-grader told his mom. “These people don’t have a mommy and a daddy telling them every day that they’re loved and that they’re important.”

So Maddox’ Mission was born. Now, thanks to donations from around the country and right here at home, Maddox and his family hit the streets every three months to pass out hundreds of weather-proof bags filled with the items mentioned above. In December, they also handed out blankets, coats and clothing to people in need across from the Central Library in Downtown Indy, as well as Wheeler Mission, homeless camps and a shelter in Noblesville.

Keegan is impressed with his brother’s commitment. “I think what he’s doing is amazing. For somebody who is so small, who is so young, he has the biggest heart of anybody I ever met.”

“BEING A RILEY KID MADE HIM A BETTER PERSON”

Despite the energy it takes to run Maddox’ Mission while the boys’ own bodies often run on empty, Shawn wouldn’t have it any other way.

“I’m just amazed by this little boy who has every right to be angry and upset, and being a Riley kid just made him a better person. It didn’t take anything away from who he was,” she said.

When others ask her how she handles a high-strung, determined child, she tells them God knew he needed that fighting spirit to go through the things he has and to come out on the other side.

“That’s what I love the most about him, he never quits,” she said. “He’s got this determination to succeed, but he’s a little goofball and he’s just unapologetically Maddox.”

While others might bemoan the circumstances they find themselves in, Shawn fully embraces the life they are leading, a testament to the family’s strong faith.

“It’s all by the grace of God to be honest. Having a diagnosis like that is hard because you never want your children to go through pain, you never want the uncertainty, but mitochondrial disease has given us so much more than it’s taken. We’re a stronger family because we have it.”

As she talks, tears well up in her eyes, and Keegan reaches over and takes her hand.

“I watched my daughter give up high school football games and dances to sit in a hospital room with her brothers,” Shawn added. “I watched my 13-year-old pick Maddox up off the floor when he passed out at a store. I watch them pray over each other every day. I watch them beg God to take it away from the other sibling and give it to them.”

The prognosis for both boys is unclear, their mom said. Keegan’s illness hasn’t progressed significantly since puberty, a blessing she said. Like his brother, he has a feeding tube, though it’s supplementary to his daily diet, and his organs don’t appear to have been affected. Maddox has severe gastroparesis (his stomach can’t empty itself in the normal fashion), so he receives nutrients through a gastrostomy-jejunostomy tube. 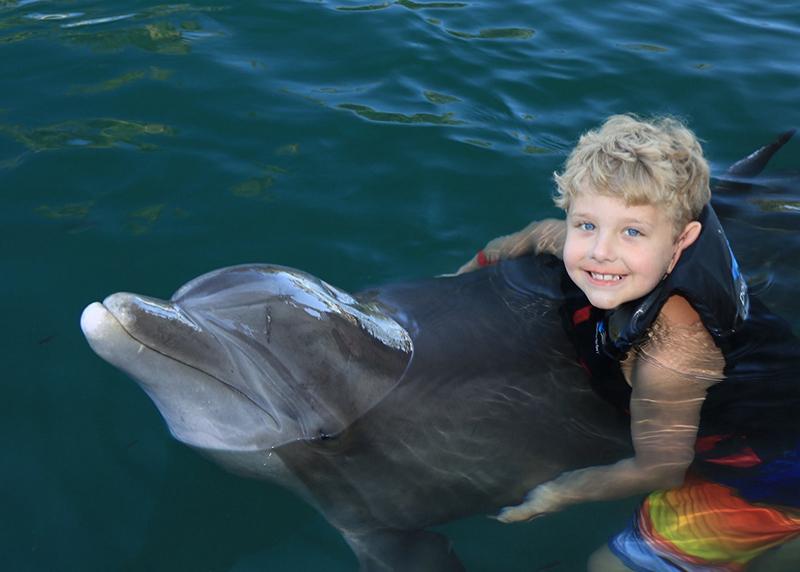 Shawn and Ian are thankful for the care both boys have received at Riley and offer a special shout out to Dr. Bryan Hainline, who specializes in molecular genetics. He has been helping to coordinate Maddox’ care since the boy was 18 months old.

“He is literally our lifeline,” Shawn said.

In March, the family traveled to Hawaii for Maddox’ Make-A-Wish trip, where he got to kiss a dolphin and attend a hog roast/luau. He was inspired by surfer Bethany Hamilton, who lost her left arm to a shark in 2003. Maddox watched the movie about her story, “Unstoppable,” countless times while hospitalized.

When she asked her son why he liked that movie so much, he said because Hamilton, who was 13 at the time of the attack, didn’t give up.

It’s amazing, she said, how much kids are taking in from the examples they see around them.

“If you let them think and dream on their own, they’ll do it.”

Her biggest lesson through all of the years of hospitalizations, treatment, fear and pain: “Our faith and the love my kids have for each other is so much bigger than mitochondrial disease, and it can never take that away. God is amazing, and we’re just lucky that he’s using us.”